The aim of the present work was to improve our knowledge on the mechanisms underlying the beneficial or deleterious effects on testicular function of the so-called Mediterranean and Western diet by analyzing glutamyl aminopeptidase (GluAP), gamma glutamyl transpeptidase (GGT) and dipeptidyl peptidase IV (DPP IV) activities in testis, as enzymes involved in testicular function. Male Wistar rats (6 months old) were fed for 24 weeks with three different diets: standard (S), an S diet supplemented with virgin-olive-oil (20%) (VOO), or a S diet enriched with butter (20%) plus cholesterol (0.1%) (Bch). At the end of the experimental period, plasma lipid profiled (total triglycerides, total cholesterol and cholesterol fractions (HDL, LDL and VDL)) were measured. Enzymatic activities were determined by fluorimetric methods in soluble (sol) and membrane-bound (mb) fractions of testicular tissue using arylamide derivatives as substrates. Results indicated an increase in plasmatic triglycerides, total cholesterol, LDL and VLDL in Bch. A significant increase of mb GluAP and GGT activities was also found in this diet in comparison with the other two diets. Furthermore, significant and positive correlations were established between these activities and plasma triglycerides and/or total cholesterol. These results support a role for testicular GluAP and GGT activities in the effects of saturated fat (Western diet) on testicular functions. In contrast, VOO increased sol DPP IV activity in comparison with the other two diets, which support a role for this activity in the effects of monounsaturated fat (Mediterranean diet) on testicular function. The present results strongly support the influence of fatty acids and cholesterol on testicular GluAP and GGT activities and also provide support that the reported beneficial influence of the Mediterranean diet in male fertility may be mediated in part by an increase of testicular sol DPP IV activity.
Keywords: testis-peptidase-activity; renin-angiotensin-system; high-fat-diet; virgin-olive-oil testis-peptidase-activity; renin-angiotensin-system; high-fat-diet; virgin-olive-oil

High fat diets have been related to obesity and to several associated health problems such as hypertension, atherosclerosis, diabetes and infertility [1]. Dietary fatty acid composition modifies sex steroid levels and influences fertility in mammals. However, the results are still not conclusive, and the involved mechanisms are not totally understood [2]. It has been reported that hypercholesterolemia and high plasma levels of triglycerides are associated with poor semen quality and direct adverse effects on the testicular function that may lead to male infertility [3]. Hypercholesterolemic rats have a marked decrease in fertility index, testicular weight, sperm cell count, and percentages of sperm motility and viability, associated with a significant increase in sperm cell abnormalities [1]. Diets rich in saturated fatty acids modify the testicular morphology, with lower seminiferous epithelium height, diameter and cell proliferation [4]. In addition, a 20% supplementation of fat in the diet during sexual maturation markedly reduces the daily sperm production at adulthood in Wistar rats [5].
Lipids have been closely associated with intracellular generation of reactive oxygen species [2,6] as substrates for oxidative attack and a source of free radical generation and/or chain propagator reactions. In addition, different oil-supplemented diets strongly modify testicular lipid composition [1,2], and this is closely related to changes in several enzymatic activities that play a major role in the metabolism of bioactive peptides. In addition, it has been observed that the function of the hypothalamic–pituitary–gonadal axis is highly sensitive to adverse metabolic conditions such as obesity and diabetes. Obesity in men is associated with lower total testosterone, free testosterone and sex hormone-binding globulin, and the decline in testosterone and free testosterone with age is greater in obese compared with lean men [7]. On the other hand, it has been reported that cholesterol-enriched diet disrupts the blood testis barrier and increases lipid deposition in the seminiferous tubules [8].
A local renin-angiotensin system (RAS) has been clearly established in testis which may participate in male reproductive functions [9,10,11]. It has been suggested that Ang II-metabolizing activity (glutamyl aminopeptidase, GluAP) may be influenced by dietary fatty acids composition and cholesterol content during early mice development [12]. This assumption was speculative and based on various independent studies [13,14,15] which, taken together, would suggest such a conclusion. In the present study and in order to analyze the influence of those factors, we simultaneously analyzed testicular GluAP, as well as two other recognized enzymes involved in the male reproductive function, such as gamma glutamyl transpeptidase (GGT) and dipeptidyl peptidase IV (DPP IV) [16,17], together with plasma lipid profile: total triglycerides, total cholesterol and cholesterol fractions (HDL, LDL and VLDL), in animals fed with three different diets: (1) standard (S), (2) an S diet supplemented with virgin-olive-oil (20%) (VOO) and (3) an S diet enriched with butter (20%) plus cholesterol (0.1%) (Bch). In addition, in order to compare with a previous study [12] in which the period of feeding was performed during early mice development (from 1–2 weeks-old to 11–12 weeks-old), the present study was carried out at the beginning of the feeding period in fully developed 6-month-old adult male Wistar rats, which were fed for 6 additional months, being sacrificed and obtained their testicular and plasma samples when they reached 12 months of age.

Animals fed the Bch diet showed higher body weight compared with S and VOO groups from the respective 2nd and 3rd month of the feeding period. However, no significant differences were observed between S and VOO diets throughout the experimental period (Figure 1A). At the end of the experimental period, the body weight increase (g/day) was 61.32 ± 8.39 (mean ± SEM) for the S diet and 84.21 ± 6.71 for the VOO diet (37.33% higher than S group) without significant differences between them. However, the mean ± SEM body weight increase for Bch was 140.08 ± 8.92 g/day, which was significantly (p < 0.05) different in comparison with the S and VOO groups (128.44% higher than S and 65.56% higher than VOO) (Figure 1B).

While GluAP and GGT activities were higher (p < 0.05) in Bch than in VOO and S in the mb fraction, no differences were observed between groups in the sol fraction. In contrast, DPP IV activity was higher (p < 0.05) in VOO in comparison with S and Bch (Table 1 and Figure 3A–C).
Furthermore, significant and positive correlations were established between mb GluAP activity and total plasma triglycerides (Figure 3D, p < 0.01, r = 0.664) and total plasma cholesterol (Figure 3E, p < 0.05, r = 0.593). In addition, a significant positive correlation was established between testicular mb GGT activity and total plasma cholesterol (Figure 3F, p < 0.05, r = 0.536).

Fifteen 6-month-old male Wistar rats, supplied by Harlan Ibérica (Barcelona, Spain), were used in this study. Mean body weight was 495 g at the start of the study. Rats were housed at a constant temperature (25 °C) and under constant day length (12 h). Experimental procedures for animal use and care were in accordance with European Communities Council Directive 2010/63/UE and Spanish regulation RD 53/2013, and the study was approval by the Institutional Animal Care and Use Committee of the University of Jaén.

After reception, rats (aged 6 months) were allowed free access to water and food for 24 weeks until the end of the experiment (aged 12 months). Until reception, all rats had been fed with the same standard diet that we used for group 1. Rats were randomly divided into 3 groups (n = 5 each). Group 1 (S) was fed a standard diet for experimental rats. Group 2 (VOO) was fed a diet supplemented with virgin olive oil (20%), and group 3 (BCh) was fed a diet supplemented with butter (20%) plus cholesterol (0.1%). The nutrition value and lipid profile of diets used during the experimental periods are shown in Table 2. The standard (S) diet was low in energy and high in carbohydrates compared with the VOO and Bch diets. The virgin olive oil (VOO) diet was high in monounsaturated fatty acids (MUFA) and polyphenols, and the butter plus cholesterol (Bch) diet was high in saturated fatty acids (SFA) and cholesterol.

After the feeding period (24 weeks), animals were perfused with saline solution through the left cardiac ventricle under equithensin anesthesia (2 mL/kg body weight); a sample of blood was previously removed and centrifuged for 10 min at 2000 g to obtain the plasma.
Samples from the right testis (interstitial area and seminiferous tubules) were quickly removed and frozen in dry ice. To obtain the soluble fraction, tissue samples were homogenized in 10 volumes of 10 mM HCl-Tris buffer (pH = 7.4) and ultracentrifugated at 100,000× g for 30 min (4 °C). The resulting supernatants were used to measure soluble enzymatic activity and protein content, assayed in triplicate. To solubilize membrane proteins, pellets were re-homogenized in HCl-Tris buffer (pH = 7.4) plus 1% Triton X-100. After centrifugation (100,000× g, 30 min, 4 °C), supernatants were used to measure membrane-bound activity and proteins, also in triplicate. To ensure the complete recovery of activity, detergent was removed from the medium by adding adsorbent polymeric Biobeads SM-2 (100 mg/mL) (Bio-Rad, Richmond, VA, USA) to the samples, which were shaken for 2 h at 4 °C.

For statistical analysis, we used one-way analysis of variance (ANOVA) with post-hoc comparisons using the LSD test. Differences with p-values < 0.05 were considered significant. The Pearson correlation coefficient was used to establish the relationship between peptidase activities and plasma lipid levels. All results were expressed as the mean ± standard error.

The increase in GluAP activity with Bch and the positive correlation observed between testicular GluAP and plasma triglycerides and cholesterol strongly support its role in testicular functions. Moreover, the increase in GGT activity in the Bch group could be related to higher levels of oxidative stress in the testes of these animals. Interestingly, these results were not found with VOO. The VOO diet, rich in monounsaturated fatty acids and polyphenols, increased the levels of DPP-IV activity related to a better immuno-protection in testis. Taken together, these results could help to explain the adverse consequences of high-saturated fatty acids and cholesterol diets on testicular function, support the benefits of a Mediterranean diet and virgin olive oil, and provide new dietary strategies to improve male fertility.

All the authors participated in the design and conducted the experiments, as well as evaluated the results and wrote the manuscript. 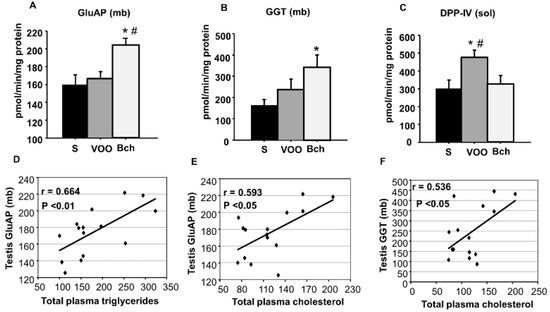