Hericium erinaceus is a culinary-medicinal mushroom used traditionally in Eastern Asia to improve memory. In this work, we investigated the neuroprotective and neuritogenic effects of the secondary metabolites isolated from the MeOH extract of cultured mycelium of H. erinaceus and the primary mechanisms involved. One new dihydropyridine compound (6) and one new natural product (2) together with five known compounds (1,3–5,7) were obtained and their structures were elucidated by spectroscopic analysis, including 2D NMR and HRMS. The cell-based screening for bioactivity showed that 4-chloro-3,5-dimethoxybenzoic methyl ester (1) and a cyathane diterpenoid, erincine A (3), not only potentiated NGF-induced neurite outgrowth but also protected neuronally-differentiated cells against deprivation of NGF in PC12 pheochromocytoma cells. Additionally, compound 3 induced neuritogenesis in primary rat cortex neurons. Furthermore, our results revealed that TrkA-mediated and Erk1/2-dependant pathways could be involved in 1 and 3-promoted NGF-induced neurite outgrowth in PC12 cells. View Full-Text
Keywords: Hericium erinaceus; erinacine A; cyathane diterpenoid; 4-chloro-3,5-dimethoxybenzoic methyl ester; PC12 cell; neuritogenesis Hericium erinaceus; erinacine A; cyathane diterpenoid; 4-chloro-3,5-dimethoxybenzoic methyl ester; PC12 cell; neuritogenesis
►▼ Show Figures 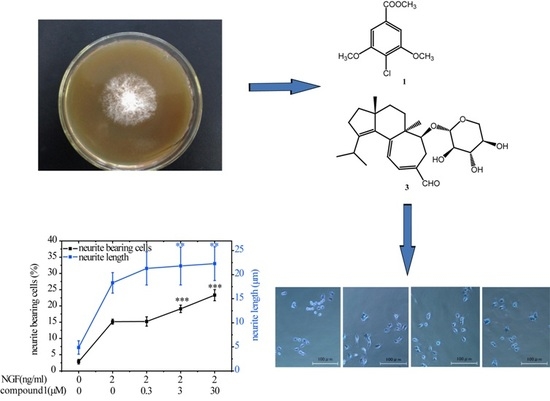