Dendritic Cells and Their Role in Allergy: Uptake, Proteolytic Processing and Presentation of Allergens
Next Article in Special Issue

Human Papillomavirus (HPV) E6/E7 mRNA test demonstrated high specificity in detecting HPV infections, but studies assessing its efficacy in terms of cancer risk stratification are lacking. Follow-up studies are arduous and expensive. Biobank would be the answer to the problem, although data investigating the effects of long-term storage on RNA preservation are still needed. We addressed these issues by retrieving 202 residual liquid-based cervical specimens, collected from 149 women attending cervical cancer screening during the years 2001–2012. Samples were stored in Adriatic Biobank at room temperature and without any handing. After calculation of RNA yield and purity, E6/E7 mRNA test was retrospectively performed on each samples, to assess analytic and diagnostic performances. Using automated extraction procedures, RNA of good quantity and quality was obtained. The mean value of RNA concentration was 27.5 ng/μL. The mean A260/A280 ratio was 2.1. An invalid mRNA test result was found in 11.9% of the specimens. Neither RNA integrity, nor analytic performances of mRNA test were influenced by the year of sample collection. In total, 62.4% of the specimens tested as mRNA positive; among these, 89.2% were CIN2+. E6/E7 mRNA was detected in all Squamous Cervical Cancer (SCC) cases. Percentage of positive samples increased with the severity of histological diagnosis. mRNA testing, showing specificity and predictive values of 75.6% and 84.4%, respectively, significantly improved the corresponding values for DNA testing. Thus, the reflex mRNA test was demonstrated to be suitable to triage women with persistent cervical lesions. A “one sample for all” approach is possible, with practical benefits for Biobank-based long-term longitudinal studies, diseases prevention, prediction, diagnosis and treatment. View Full-Text
Keywords: cervical cytology biobank; RNA stability; E6/E7 mRNA testing; retrospective longitudinal study; triage test; personalised medicine cervical cytology biobank; RNA stability; E6/E7 mRNA testing; retrospective longitudinal study; triage test; personalised medicine
►▼ Show Figures 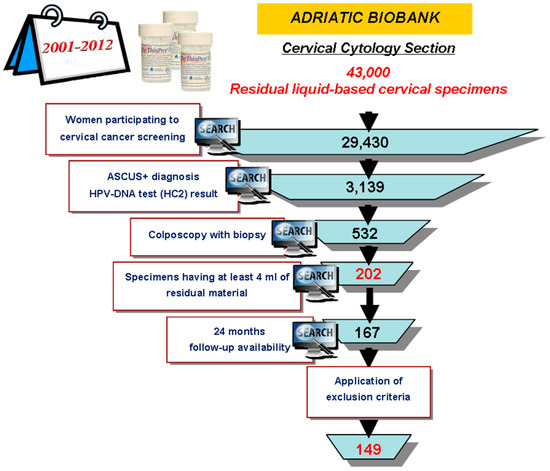