Finding a Balance between Protection and Pathology: The Dual Role of Perforin in Human Disease
Previous Article in Journal

Neuroinflammation, inflammation of the central nervous system (CNS), occurs in response to lesions caused by various conditions, including infection, traumatic brain injury, and autoimmunity [1]. Neuroinflammation is known to play a role in neurodegenerative diseases, such as multiple sclerosis (MS), Parkinson’s disease, and septic encephalopathy [2,3,4]. MS, specifically, is the most common neuroinflammatory autoimmune disease, and it is characterized by inflammation in the brain and spinal cord that damages the myelin sheath, thereby causing demyelination of neurons. Cerebral microvascular endothelial cells (CMECs), which form the blood-brain barrier (BBB), are essential for the maintenance of homeostasis and for restricting immune cell access to the CNS. CMECs play important roles in the initial stages of brain disorders, including MS pathogenesis, by upregulating cellular adhesion molecules such as intercellular adhesion molecule-1 (ICAM-1), vascular cell adhesion molecule-1 (VCAM-1), and E-selectin, which causes them to adhere to inflammatory cells and leads to migration of inflammatory cells into the brain [1,5]. Cellular adhesion molecules on the surfaces of cerebral endothelial cells enhance the local inflammatory response within cerebral vessels and the brain parenchyma by recruiting and inducing the transmigration of leukocytes [6,7,8]. ICAM-1 and VCAM-1, specifically, are constitutively expressed in CMECs [9]. Various stimuli such as lipopolysaccharide (LPS), a bacterial component that induces inflammation, upregulate ICAM-1 and VCAM-1, and changes in the expression of these molecules promote cerebral vascular inflammation, BBB disruption, and vasogenic edema [10].
Chrysin (5,7-dihydroxyflavone), a flavonoid component of propolis, blue passion flowers, and fruits, has been reported to have anti-inflammatory, anti-allergic, and anti-cancer effects [11,12,13]. In mouse microglial cells, chrysin has been shown to play a role as a suppressor of LPS-induced inflammation by inhibiting the release of nitric oxide (NO), tumor necrosis factor-α (TNF-α), and interleukin-1β (IL-1β). Chrysin has also shown inhibitory effects on neuroinflammation by repressing the expression of pro-inflammatory cytokines and upregulating astrocytic protein expression in hippocampal neurons [14]. Recently, chrysin has been reported to attenuate TNF-α-induced upregulation of ICAM-1 and E-selectin, but not VCAM-1, in aortic endothelial cells [15] and to inhibit TNF-α-induced upregulation of ICAM-1 through activator protein-1 (AP-1) and nuclear factor-κB (NF-κB) in respiratory epithelial cells [12]. However, information on the effects of chrysin on brain endothelial cells and their regulatory mechanisms is lacking. In the present study, the effects of chrysin on the expression of adhesion molecules in mouse brain endothelial cells (bEnd.3) were analyzed, and NF-κB-mediated signal transduction and mitogen-activated protein kinase (MAPK) expression were assessed in chrysin-treated bEnd.3 cells, to better understand the mechanisms underlying the beneficial effects of chrysin in neuroinflammatory diseases.

To verify the inhibitory effects of chrysin on LPS-induced VCAM-1 protein expression, we performed immunocytochemistry. Treatment of bEnd.3 cells with 10 μg/mL LPS for 24 h significantly increased the levels of VCAM-1 protein (100.0 ± 5.0% to 209.2 ± 13.0%), and VCAM-1 expression was decreased by treatment with 30 and 100 μM chrysin (172.6 ± 6.9% and 117.8 ± 9.8%) (Figure 2a). One of the earliest events in inflammation is binding of monocytes to the endothelium and infiltration of monocytes through these cells. Therefore, monocyte-endothelial interactions are important to the development of inflammatory diseases [17]. To determine whether chrysin inhibits inflammation at an early stage, we performed a cell–cell adhesion assay. Treatment of bEnd.3 cells with 10 μg/mL LPS significantly increased the number of U937 cells attached to activated endothelial cells at 24 h (100.0 ± 27.0% to 374.5 ± 55.4%). Chrysin treatment inhibited the adhesion of monocytes to LPS-stimulated bEnd.3 cells in a concentration-dependent manner (Figure 2b). In particular, 100 μM chrysin decreased the attachment of U937 cells to that of the control level (83.9 ± 9.4%). This finding indicates that chrysin inhibits the attachment of monocytes to endothelial cells by blocking the stimulation of endothelial cells with LPS. Cell viability was measured to demonstrate that the reduction of U937 attachment induced by chrysin was not due to cytotoxicity. As shown in Figure 1c, the 10–100 μM chrysin did not show any cytotoxic effect in both bEnd.3 and U937 cells.

NF-κB signaling is associated with the onset of various inflammatory autoimmune diseases such as leukemia, inflammatory bowel disease, arthritis, sepsis, asthma, and MS [18]. Recently, chrysin was reported to attenuate inflammatory mediator-induced adhesion molecule expression via transcription factor NF-κB signaling in respiratory epithelial cells [12]. Therefore, to examine whether NF-κB played a role in LPS-induced VCAM-1 expression and whether chrysin inhibited LPS-induced VCAM-1 expression through NF-κB signaling in bEnd.3 cells, we used the NF-κB inhibitor SN50. The results showed that SN50 inhibited VCAM-1 mRNA after 8 h of LPS treatment (452.2 ± 16.7% to 180.2 ± 42.5%) (Figure 3a). To determine whether treatment with chrysin would inhibit NF-κB signaling, IκBα degradation and NF-κB translocation to the nucleus were investigated. After pretreatment with chrysin, bEnd.3 cells were exposed to LPS for 8 h. Chrysin significantly attenuated LPS-induced IκBα degradation (29.7 ± 16.8% to 94.6 ± 11.3% at 100 μM) (Figure 3b) and LPS-induced NF-κB p65 subunit translocation from the cytosolic to the nuclear fraction of bEnd.3 cells (Figure 3c,d). This finding indicates that chrysin blocks LPS-induced upregulation of VCAM-1 through NF-κB signaling in brain endothelial cells.

bEnd.3 cells, a mouse brain endothelial cell line, and U937, a human monocyte cell line, were purchased from American Type Culture Collection (ATCC) (Manassas, VA, USA). The bEnd.3 cells were maintained in Dulbecco’s modified Eagle’s medium (DMEM) (Gibco-BRL, Grand Island, NY, USA) with 10% fetal bovine serum (FBS, Gibco-BRL) and 1% penicillin streptomycin (PS, Invitrogen, Carlsbad, CA, USA). The U937 cells were maintained in Roswell Park Memorial Institute (RPMI) medium (Gibco-BRL) supplemented with 10% FBS and 1% PS. Cells were incubated in an atmosphere of 95% air and 5% CO2 at 37 °C. Cells were pretreated with chrysin or inhibitors for 30 min before exposure to LPS in DMEM with 1% FBS. Chrysin and inhibitors were dissolved in 1% dimethyl sulfoxide (DMSO), and LPS was dissolved in distilled water. The final concentration of DMSO was 0.1%, which was found to have no effect on cell viability. LPS and chrysin were both obtained from Sigma-Aldrich (St. Louis, MO, USA). High-glucose DMEM, FBS, PS, and trypsin-EDTA were obtained from Invitrogen. SN50, SP600125, SB202190, and PD98059 were obtained from Calbiochem (La Jolla, CA, USA).

4.3. Preparation of Cytosolic or Nuclear Extracts

Cytosolic and nuclear extracts were obtained as described previously [35]. Cells were lysed in a buffer containing 50 mM Tris, 10 mM NaCl, 1 mM ethylenediaminetetraacetic acid (EDTA), 1 mM dithiothreitol (DTT), 1 μM leupeptin, 1 μM pepstatin, 1 μM aprotinin, and 1 μM phenylmethylsulfonyl fluoride (PMSF). After centrifugation at 18,000× g for 10 min at 4 °C, the nuclei were extracted from the pellets. The cytosolic fractions (supernatant) were separated, and the nuclei were extracted from the pellets at 4 °C in the same buffer as before, except with the addition of 0.4 M NaCl.

An adhesion assay was performed as previously described [43]. bEnd.3 cells, grown in 24-well plates, were treated with LPS at 37 °C for 24 h after pretreatment with chrysin for 30 min and then washed twice with PBS. U937 cells were labeled for 30 min at 37 °C with 2 μM 5-chloromethylfluorescein diacetate (CMFDA, Molecular Probes), washed twice with PBS, and suspended in growth medium. Then, 2.5 × 105 labeled cells were added to the bEnd.3 monolayer at a final volume of 500 μL and incubated in a CO2 incubator for 2 h at 37 °C on a block light. Non-adherent cells were removed from the plate by gentle washing with PBS, and the number of adherent cells was determined by measuring the fluorescence intensity under a fluorescence microscope (Carl Zeiss, Germany).

MTT assay for cell viability was performed as previously described [44]. Cells were seeded in 96-well plates at a density designed to reach 90% confluency at the time of assay. Cells were treated with various concentrations of chrysin in triplicate. After 24 h of chrysin treatment, MTT was added at 0.5 mg/mL finally, and the plate was incubated for 1 h at 37 °C. Cells having functional mitochondrial succinate dehydrogenase can convert MTT to formazan that generates a blue color when dissolved in dimethyl sulfoxide (DMSO). DMSO was added and the absorbance was read at 540 nm using a BioTek spectrophotometer (Winooski, VT, USA).

Data are expressed as mean ± standard error of the mean of three separate determinations for each group. Numerical data were compared using Student’s t-test or one-way ANOVA post hoc test for unpaired observations between two groups. A p-value < 0.05 was considered significant.

This research was supported by the Basic Science Research Program through the National Research Foundation of Korea (NRF), which is funded by the Ministry of Education (NRF-2015R1D1A1A01060069), and by a grant of the Korea Health Technology R and D Project through the Korea Health Industry Development Institute (KHIDI), funded by the Ministry of Health and Welfare (HI14C2417, HI16C0992), Republic of Korea. 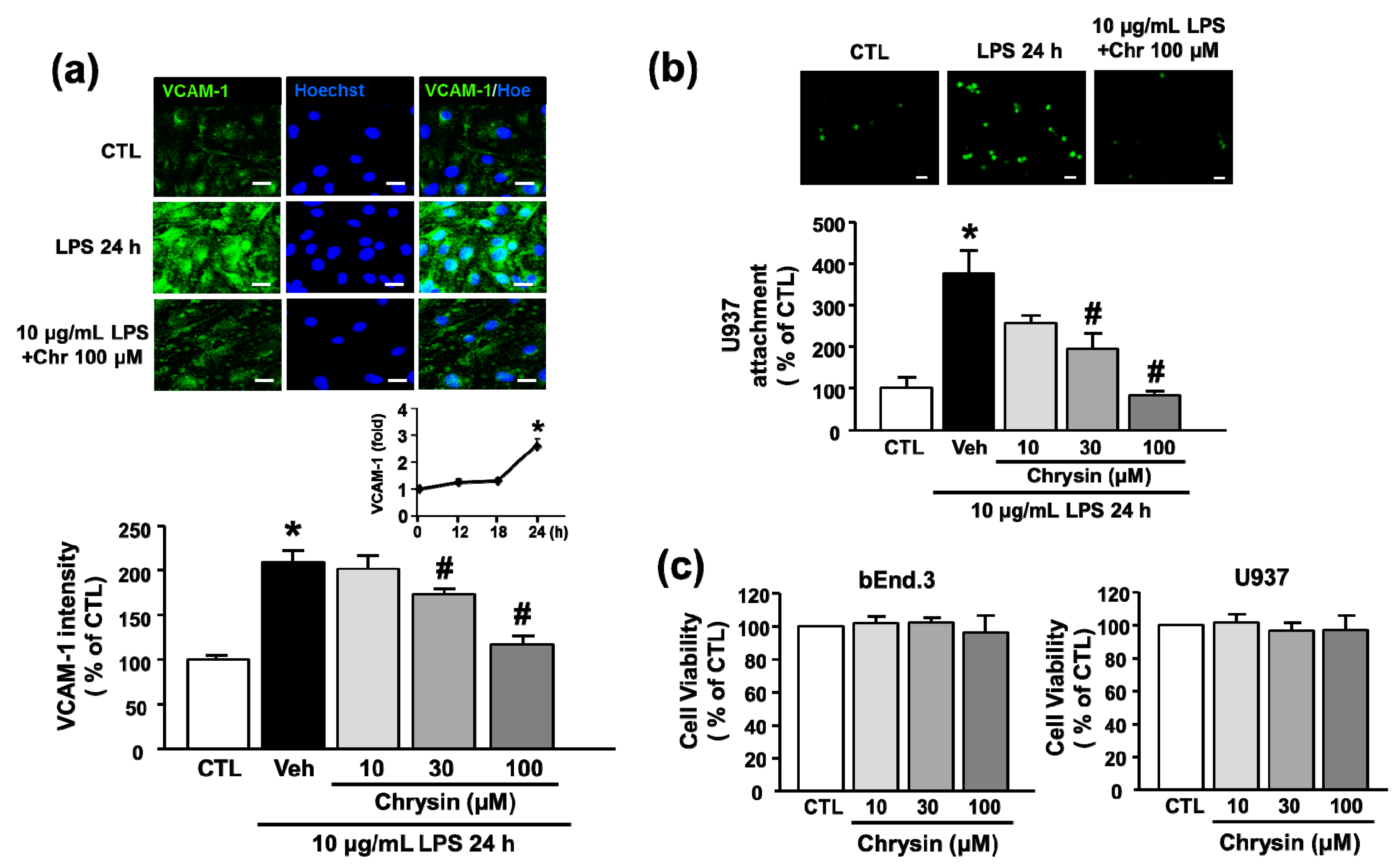 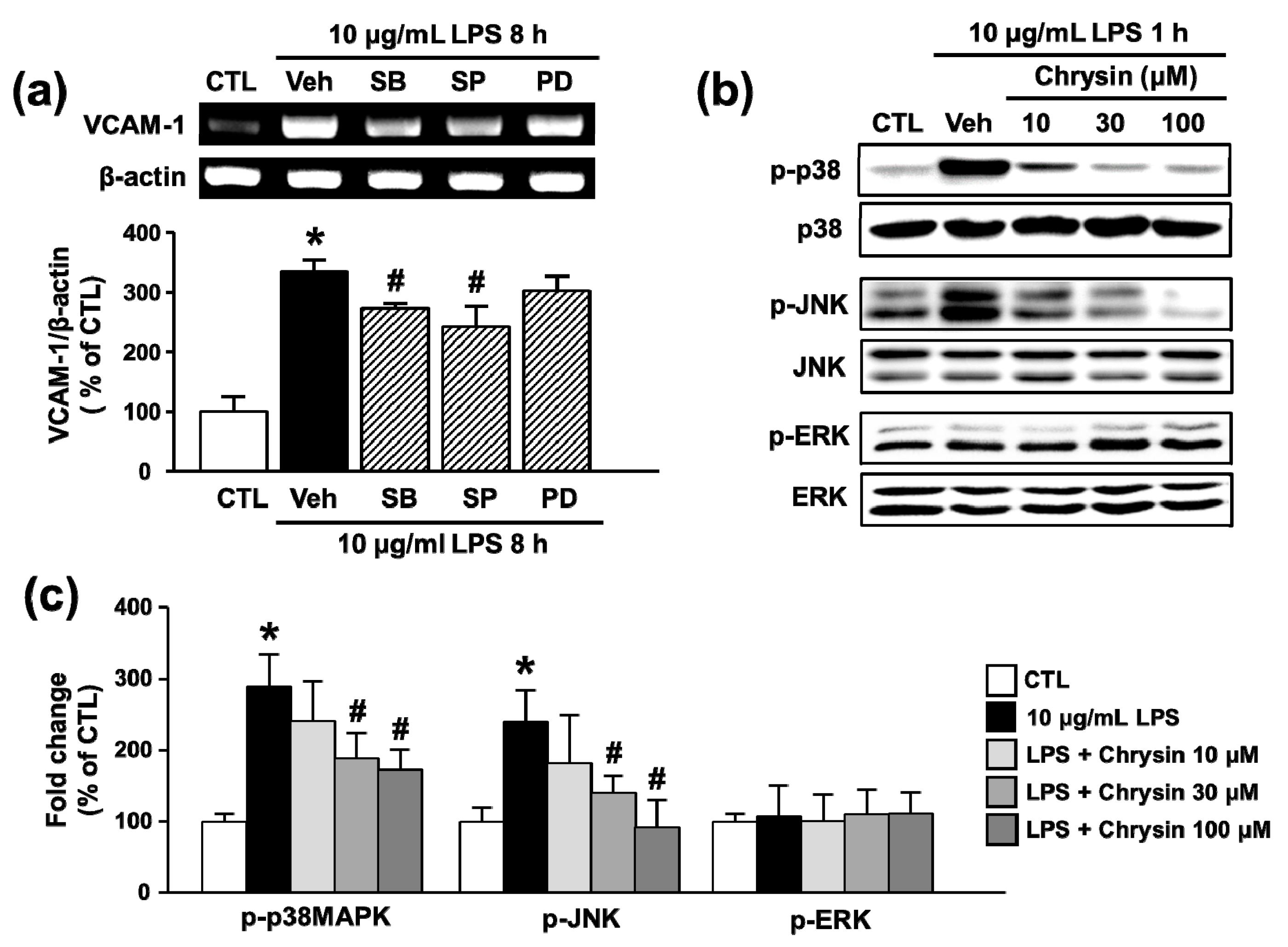