Terpenoids from Platostoma rotundifolium (Briq.) A. J. Paton Alter the Expression of Quorum Sensing-Related Virulence Factors and the Formation of Biofilm in Pseudomonas aeruginosa PAO1
Next Article in Special Issue

Issues of Acute Kidney Injury Staging and Management in Sepsis and Critical Illness: A Narrative Review
Previous Article in Journal

Acute respiratory distress syndrome (ARDS) is a life-threatening disease characterized by an acute-onset, progressive, hypoxic condition with radiographic bilateral lung infiltration, e.g., due to various pathogens, but not due to hydrostatic pulmonary edema. Thus, acute respiratory distress syndrome (ARDS) results in a highly impaired pulmonary function and hypoxemia [1]. A draft definition proposed three mutually exclusive categories of ARDS based on the degree of hypoxemia: mild (PaO2/FIO2 ≤ 300 mmHg), moderate (PaO2/FIO2 ≤ 200 mmHg), and severe (PaO2/FIO2 ≤ 100 mmHg). ARDS is most often due to direct injury to the lung (e.g., pneumonia and gastric aspiration) or indirect injury (e.g., sepsis and pancreatitis) [2]. However, ARDS can also develop following trauma or inhalation of toxic gases like ozone [3]. Thus, ARDS is characterized by a strong inflammatory response and impaired oxygenation due to a ventilation-perfusion mismatch [4], resulting in pulmonary vasoconstriction caused by the Euler-Liljestrand mechanism. This mechanism, while being helpful in compensating for regional ventilation abnormalities, aggravates hypoxemia in ARDS due to a further increase in pulmonary artery pressure. Of note, in ARDS patients severe pulmonary hypertension can even lead to right heart failure and death. Whereas the Euler-Liljestrand mechanism in ARDS increases pulmonary artery hypertension and hypoxemia, counter regulating mechanisms are activated as well [5]. Key regulators of the hypoxic response are the so-called hypoxia inducible factors (HIF) and HIF degrading prolylhydroxylases (PHD). HIF and PHD are of importance both in hypoxia and inflammation i.e., important during human hypoxemia and profound inflammatory response in ARDS [6,7]. In particular, the HIF-2 pathway is involved in a multitude of biological processes impacting on pulmonary hypertension, erythropoietin synthesis, iron metabolism, bone marrow microenvironment, and tumor progress [8,9,10,11]. Alterations of constitutively activated HIF-2α are associated with an increased risk for neuroendocrine tumors [12,13]. Furthermore, HIF-2α is implicated in the pulmonary regulation of thrombo-spondin-1 and contributes to pulmonary artery hypertension-driven vascular remodeling and vasoconstriction [14]. Thus, differences in HIF-2α activity or HIF degrading prolylhydroxylases might influence the pulmonary artery hypertension counterregulating effects of hypoxemia, and thus alter patients’ outcome.
Recently, functionally active genetic variants were identified both in the HIF-2α (C/T; Single Nucleotide Polymorphism SNP C/G [ch2: 46441523(hg18)] and the PHD2 genes (C/T; SNP rs516651 and T/C; SNP rs480902). These genetic variants were found to be associated with erythrocytosis, pulmonary hypertension, and chronic mountain sickness, respectively [10,15,16,17]. However, it is unknown whether these genetic variants impact on the outcome in ARDS patients.
Accordingly, we tested the hypotheses that (1) SNPs in HIF-2α or PHD2 genes are common in Caucasians, and (2) they are an independent risk factor for 30-day mortality in ARDS.

Allele frequencies were 2.3% for homozygous TT-genotype, 18.9% for heterozygous CT-genotype, and 78.8% for homozygous CC-genotype. Patients’ clinical characteristics did not significantly differ between subcohorts (Table 1), i.e., for serum creatinine concentration or need for dialysis.
Kaplan-Meier-analyses (Figure 1) showed a significantly higher mortality for the homozygous TT-genotype (p = 0.001).
Most important, multivariate Cox-regression-analyses (Table 2) revealed that the rs516651 TT-genotype is an independent predictor of 30-day mortality from ARDS and carries a 3.34 times higher mortality risk, when including known risk factors for mortality from ARDS like gender, age, need for renal replacement therapy, or SAPS II. Five of 6 (83.3%) ARDS patients with the rs516651 TT-genotype did not survive 30 days.

Allele frequencies were 3.7% for homozygous TT-genotype, 43.9% for heterozygous CT-genotype, and 52.4% for homozygous CC-genotype. Patients’ clinical characteristics did not differ between subcohorts (Table 1). Kaplan-Meier analyses and log-rank test (p = 0.199) revealed no impact of the specific genotype on 30-day mortality from ARDS, even in the univariate analysis.

The prospective study was reviewed and approved by the Medical Faculty’s ethics committee (No. 06-3078, 1 October 2009, Medical Faculty of the University of Duisburg-Essen, Essen, Germany) and registered in the German clinical trials database (DRKS No.: DRKS00011661). Two hundred seventy two adult patients with ARDS admitted to our intensive care unit (ICU) at the University Hospital Essen, Germany, between 2004 and 2014 were screened for study inclusion. ARDS patients were considered eligible when they fulfilled the definition for ARDS [18]. Patients who refused or withdrew study participation, and all individuals with non-Caucasian ethnicity were excluded.

Arterial blood samples were taken for blood tests, microbiology cultures, and later genotyping within the first 24 h after diagnosing ARDS. Furthermore, SAPS II (Simplified Acute Physiology Score II) [27], results of blood cultures, length of hospitalization, and 30-day mortality were assessed [15,28,29]. As the HIF-2α-polymorphism was not present in Caucasian ARDS patients, in a second step, we investigated the allele frequencies in a cohort of 100 healthy blood donors (47 females, 53 males, median age: 45 years (Q1; Q3: 30; 59)), following ethics committee approval and informed written consent, to rule out that allele frequencies for the HIF-2α-polymorphism vary between ARDS patients and healthy volunteers.

In conclusion, the genetic SNP rs516651 in the PHD2 gene is an independent predictor for 30-day mortality in ARDS patients with a Caucasian heritage, whereas the rs480902 SNP is not. Furthermore, we could show that the HIF-2α GG-genotype [SNP: ch2: 46441523(hg18)] is not present in Caucasians with or without ARDS, in contrast to Han Chinese. Further studies should be conducted to analyze to what extent the PHD2 SNP rs516651 alters PHD2 protein expression and activity.

The work was supported in part by IFORES-Research grant D/D107-40240 to Schäfer by the Medical Faculty, Universität Duisburg-Essen, and departmental sources, Klinik für Anästhesiologie und Intensivmedizin, Universitätsklinikum Essen, Essen, Germany. We thank Ursula Brecklinghaus, MTA, and Bärbel Hermann, MTA, for their support regarding genotyping and qPCR.

The founding sponsors had no role in the design of the study; in the collection, analyses, or interpretation of data; in the writing of the manuscript, and in the decision to publish the results. 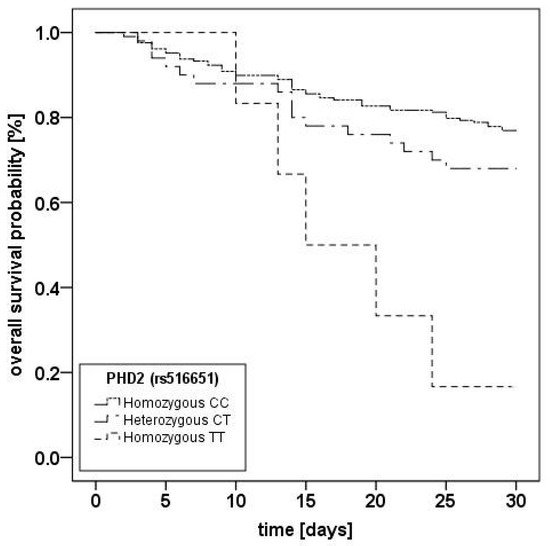