Multiple sclerosis (MS) is a chronic neurological disease characterized by the destruction of central nervous system (CNS) myelin. At present, there is no cure for MS due to the inability to repair damaged myelin. Although the neurotrophin brain derived neurotrophic factor (BDNF) has a beneficial role in myelin repair, these effects may be hampered by the over-expression of a transcriptional repressor isoform of methyl CpG binding protein 2 (MeCP2) called MeCP2E1. We hypothesize that following experimental autoimmune encephalomyelitis (EAE)-induced myelin damage, the immune system induction of the pathogenic MeCP2E1 isoform hampers the myelin repair process by repressing BDNF expression. Using an EAE model of MS, we identify the temporal gene and protein expression changes of MeCP2E1, MeCP2E2 and BDNF. The expression changes of these key biological targets were then correlated with the temporal changes in neurological disability scores (NDS) over the entire disease course. Our results indicate that MeCP2E1 mRNA levels are elevated in EAE animals relative to naïve control (NC) and active control (AC) animals during all time points of disease progression. Our results suggest that the EAE-induced elevations in MeCP2E1 expression contribute to the repressed BDNF production in the spinal cord (SC). The sub-optimal levels of BDNF result in sustained NDS and associated myelin damage throughout the entire disease course. Conversely, we observed no significant differences in the expression patterns displayed for the MeCP2E2 isoform amongst our experimental groups. However, our results demonstrate that baseline protein expression ratios between the MeCP2E1 versus MeCP2E2 isoforms in the SC are higher than those identified within the dorsal root ganglia (DRG). Thus, the DRG represents a more conducive environment than that of the SC for BDNF production and transport to the CNS to assist in myelin repair. Henceforth, the sub-optimal BDNF levels we report in the SC may arise from the elevated MeCP2E1 vs. MeCP2E2 ratio in the SC that creates a more hostile environment thereby preventing local BDNF production. At the level of transcript, we demonstrate that EAE-induces the pathological enhanced expression of MeCP2E1 that contributes to enhanced NDS during the entire disease course. Thus, the pathological induction of the MeCP2E1 isoform contributes to the disruption of the normal homeostatic signaling equilibrium network that exists between cytokines, neurotrophins and chemokines that regulate the myelin repair process by repressing BDNF. Our research suggests that the elevated ratio of MeCP2E1 relative to MeCP2E2 may be a useful diagnostic marker that clinicians can utilize to determine the degree of neurological disability with associated myelin damage. The elevated MeCP2E1 vs. MeCP2E2 ratios (E1/E2) in the SC prevent BDNF from reaching optimal levels required for myelin repair. Thus, the lower E1/E2 ratios in the DRG, allow the DRG to serve as a weak secondary compensatory mechanism for enhanced production and delivery of BDNF to the SC to try to assist in myelin repair. View Full-Text
Keywords: multiple sclerosis (MS); experimental autoimmune encephalomyelitis (EAE); methyl CpG binding protein 2 (MeCP2); brain-derived neurotrophic factor (BDNF); neurological disability scoring (NDS); myelin repair multiple sclerosis (MS); experimental autoimmune encephalomyelitis (EAE); methyl CpG binding protein 2 (MeCP2); brain-derived neurotrophic factor (BDNF); neurological disability scoring (NDS); myelin repair
►▼ Show Figures 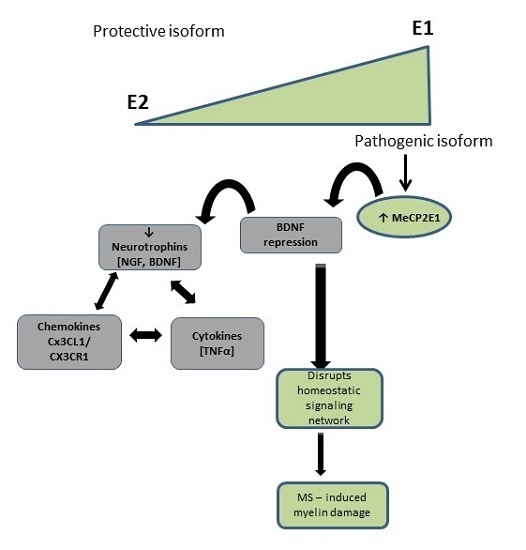