The Role of Glucagon-Like Peptide 1 (GLP1) in Type 3 Diabetes: GLP-1 Controls Insulin Resistance, Neuroinflammation and Neurogenesis in the Brain

Fast Detection of a BRCA2 Large Genomic Duplication by Next Generation Sequencing as a Single Procedure: A Case Report

The aim of this study was to verify the reliability of a next generation sequencing (NGS)-based method as a strategy to detect all possible BRCA mutations, including large genomic rearrangements. Genomic DNA was obtained from a peripheral blood sample provided by a patient from Southern Italy with early onset breast cancer and a family history of diverse cancers. BRCA molecular analysis was performed by NGS, and sequence data were analyzed using two software packages. Comparative genomic hybridization (CGH) array was used as confirmatory method. A novel large duplication, involving exons 4–26, of BRCA2 was directly detected in the patient by NGS workflow including quantitative analysis of copy number variants. The duplication observed was also found by CGH array, thus confirming its extent. Large genomic rearrangements can affect the BRCA1/2 genes, and thus contribute to germline predisposition to familial breast and ovarian cancers. The frequency of these mutations could be underestimated because of technical limitations of several routinely used molecular analysis, while their evaluation should be included also in these molecular testing. The NGS-based strategy described herein is an effective procedure to screen for all kinds of BRCA mutations. View Full-Text
Keywords: hereditary breast cancer; BRCA2; large genomic rearrangements; next generation sequencing; aCGH hereditary breast cancer; BRCA2; large genomic rearrangements; next generation sequencing; aCGH
►▼ Show Figures 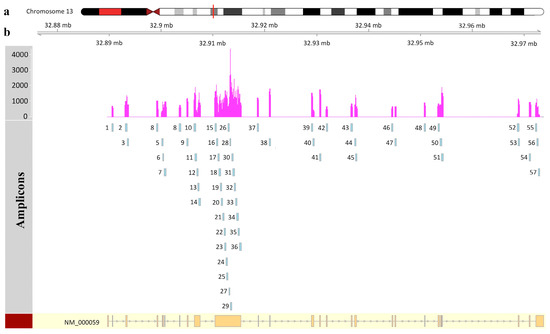