Alginate and Algal-Based Beads for the Sorption of Metal Cations: Cu(II) and Pb(II)

A new method is proposed for the production of a novel chitin-polyhedral oligomeric silsesquioxanes (POSS) enzyme support. Analysis by such techniques as X-ray photoelectron spectroscopy (XPS) and Raman spectroscopy confirmed the effective functionalization of the chitin surface. The resulting hybrid carriers were used in the process of immobilization of the lipase type b from Candida antarctica (CALB). Fourier transform infrared spectroscopy (FTIR) confirmed the effective immobilization of the enzyme. The tests of the catalytic activity showed that the resulting support-biocatalyst systems remain hydrolytically active (retention of the hydrolytic activity up to 87% for the chitin + Methacryl POSS® cage mixture (MPOSS) + CALB after 24 h of the immobilization), as well as represents good thermal and operational stability, and retain over 80% of its activity in a wide range of temperatures (30–60 °C) and pH (6–9). Chitin-POSS-lipase systems were used in the transesterification processes of rapeseed oil at various reaction conditions. Produced systems allowed the total conversion of the oil to fatty acid methyl esters (FAME) and glycerol after 24 h of the process at pH 10 and a temperature 40 °C, while the Methacryl POSS® cage mixture (MPOSS) was used as a chitin-modifying agent. View Full-Text
Keywords: enzyme immobilization; chitin; polyhedral oligomeric silsesquioxanes; Candida antarctica lipase B; rapeseed oil transesterification enzyme immobilization; chitin; polyhedral oligomeric silsesquioxanes; Candida antarctica lipase B; rapeseed oil transesterification
►▼ Show Figures 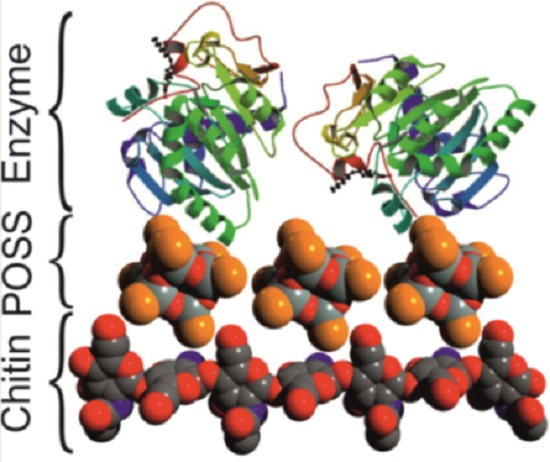