Affinity of nat/68Ga-Labelled Curcumin and Curcuminoid Complexes for β-Amyloid Plaques: Towards the Development of New Metal-Curcumin Based Radiotracers
Next Article in Special Issue

Effect of the CRAC Peptide, VLNYYVW, on mPTP Opening in Rat Brain and Liver Mitochondria
Previous Article in Journal

Translocator protein 18 kDa (TSPO) is a high affinity cholesterol- and drug-binding protein highly expressed in steroidogenic cells, such as Leydig cells, where it plays a role in cholesterol mitochondrial transport. We have previously shown that TSPO is expressed in postnatal day 3 rat gonocytes, precursors of spermatogonial stem cells. Gonocytes undergo regulated phases of proliferation and migration, followed by retinoic acid (RA)-induced differentiation. Understanding these processes is important since their disruption may lead to the formation of carcinoma in situ, a precursor of testicular germ cell tumors (TGCTs). Previously, we showed that TSPO ligands do not regulate gonocyte proliferation. In the present study, we found that TSPO expression is downregulated in differentiating gonocytes. Similarly, in F9 embryonal carcinoma cells, a mouse TGCT cell line with embryonic stem cell properties, there is a significant decrease in TSPO expression during RA-induced differentiation. Silencing TSPO expression in gonocytes increased the stimulatory effect of RA on the expression of the differentiation marker Stra8, suggesting that TSPO exerts a repressive role on differentiation. Furthermore, in normal human testes, TSPO was located not only in Leydig cells, but also in discrete spermatogenic phases such as the forming acrosome of round spermatids. By contrast, seminomas, the most common type of TGCT, presented high levels of TSPO mRNA. TSPO protein was expressed in the cytoplasmic compartment of seminoma cells, identified by their nuclear expression of the transcription factors OCT4 and AP2G. Thus, TSPO appears to be tightly regulated during germ cell differentiation, and to be deregulated in seminomas, suggesting a role in germ cell development and pathology. View Full-Text
Keywords: gonocytes; spermatogonia; translocator protein 18 kDa (TSPO); differentiation; human testis; germ cells; seminoma gonocytes; spermatogonia; translocator protein 18 kDa (TSPO); differentiation; human testis; germ cells; seminoma
►▼ Show Figures 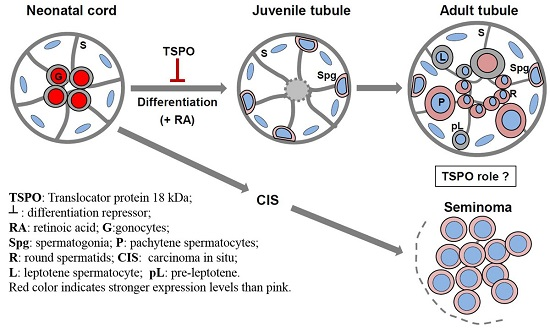