Olive leaf extract (OLE) has been used for many years for its putative health benefits, but, to date, scientific evidence for the basis of these effects has been weak. Although recent literature has described a link between ailments such as cardiovascular disease, diabetes and cancer and a protective effect of polyphenols in the OLE, the mode of action is still unclear. Here, we describe a double-blinded placebo (PBO)-controlled trial, in which gene expression profiles of peripheral blood mononuclear cells from healthy male volunteers (n = 29) were analysed to identify genes that responded to OLE, following an eight-week intervention with 20 mL daily consumption of either OLE or PBO. Differences between groups were determined using an adjusted linear model. Subsequent analyses indicated downregulation of genes important in inflammatory pathways, lipid metabolism and cancer as a result of OLE consumption. Gene expression was verified by real-time PCR for three genes (EGR1, COX-2 and ID3). The results presented here suggest that OLE consumption may result in health benefits through influencing the expression of genes in inflammatory and metabolic pathways. Future studies with a larger study group, including male and female participants, looking into direct effects of OLE on lipid metabolism and inflammation are warranted. View Full-Text
Keywords: polyphenols; transcriptomics; nutraceutical; inflammation polyphenols; transcriptomics; nutraceutical; inflammation
►▼ Show Figures 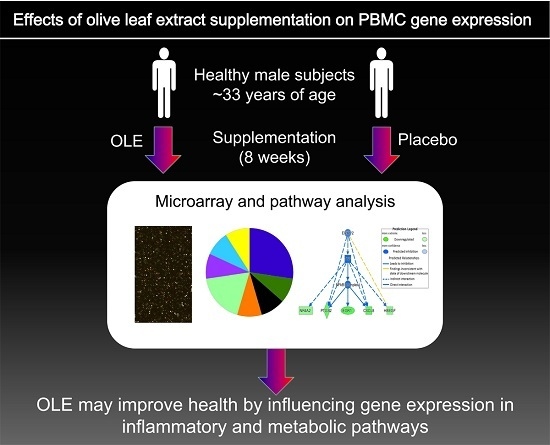