Can Clethra barbinervis Distinguish Nickel and Cobalt in Uptake and Translocation?
Previous Article in Journal

Ile-1781-Leu and Asp-2078-Gly Mutations in ACCase Gene, Endow Cross-resistance to APP, CHD, and PPZ in Phalaris minor from Mexico

Herbicides that inhibit acetyl coenzyme A carboxylase (ACCase) are commonly used in Mexico to control weedy grasses such as little seed canarygrass (Phalaris minor). These herbicides are classified into three major families (ariloxyphenoxypropionates (APP), cyclohexanodiones (CHD), and, recently, phenylpyrazolines (PPZ)). In this work, the resistance to ACCase (APP, CHD, and PPZ) inhibiting herbicides was studied in a biotype of Phalaris minor (P. minor) from Mexico, by carrying out bioassays at the whole-plant level and investigating the mechanism behind this resistance. Dose-response and ACCase in vitro activity assays showed cross-resistance to all ACCase herbicides used. There was no difference in the absorption, translocation, and metabolism of the 14C-diclofop-methyl between the R and S biotypes. The PCR generated CT domain fragments of ACCase from the R biotype and an S reference were sequenced and compared. The Ile-1781-Leu and Asp-2078-Gly point mutations were identified. These mutations could explain the loss of affinity for ACCase by the ACCase-inhibing herbicides. This is the ﬁrst report showing that this substitution confers resistance to APP, CHD, and PPZ herbicides in P. minor from Mexico. The mutations have been described previously only in a few cases; however, this is the first study reporting on a pattern of cross-resistance with these mutations in P. minor. The findings could be useful for better management of resistant biotypes carrying similar mutations. View Full-Text
Keywords: canarygrass; APP; CHD; PPZ; NTSR; TSR; mutation resistance canarygrass; APP; CHD; PPZ; NTSR; TSR; mutation resistance
►▼ Show Figures 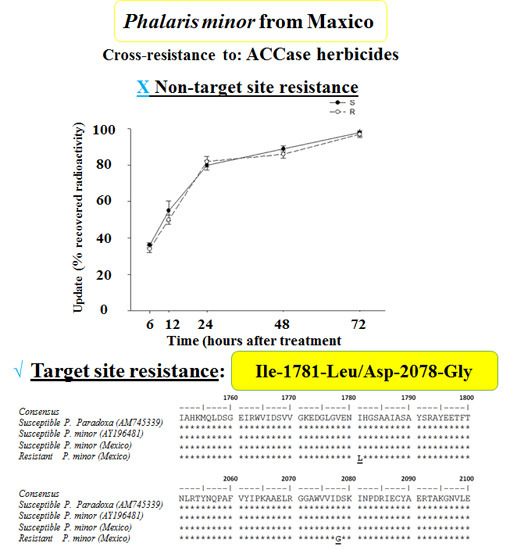