Chronic hepatitis C virus (HCV) infection is a major health problem worldwide and a leading cause of liver cirrhosis and hepatic carcinogenesis. Alteration of lipid metabolism in HCV infection has been investigated, and it is clear that HCV infection predisposes an individual not only to dyslipidemia, but also to hepatic steatosis [1] and advanced fibrosis. Moreover, dysregulated lipid metabolism in chronic HCV infection may predict the efficacy of interferon (IFN)-based antiviral therapy [2,3]. Although many studies have reported abnormal serum lipid levels in HCV infection, especially low levels of total cholesterol (TC) [4] and low-density lipoprotein cholesterol (LDL-C) [5], little is known about the serum triglyceride (TG) profile in HCV infection.
The liver, as a central organ in lipid metabolism, is involved in assembly and secretion of TG-rich very-low-density lipoprotein (VLDL) into circulation. In circulation, VLDL is catabolized by lipoprotein lipase (LPL) to a VLDL remnant called intermediate density lipoprotein (IDL), which is further metabolized to LDL by hepatic triglyceride lipase (HTGL) or incorporated into hepatocytes. Lipoprotein particles consist of free and esterified cholesterol, TGs, phospholipids, and apolipoproteins. Lipoproteins are classified into four major groups based on physicochemical characteristics: chylomicron (CM), VLDL, LDL, and high-density lipoprotein (HDL) [6].
Infectious HCV associates with lipoproteins to form lipo-viral particles in the blood. This association allows for particle entry into hepatocytes [7]. Both VLDLs and HCV lipo-viral particles are synthesized, assembled, and secreted from hepatocytes using similar metabolic pathways [8]. Therefore, VLDL is thought to be an indicator of dysregulated lipid metabolism in chronic HCV infection. Some studies have reported that the HCV core protein impairs VLDL assembly and secretion by suppressing the activity of microsomal triglyceride transfer protein (MTP) in vitro [9,10]. Among HCV genotypes, genotype 3 (G3) has been shown to be tightly associated with altered lipid metabolism [11]. However, as HCV G3 is very rare in Japan, we were not able to examine the disturbance of lipid profiles in patients with HCV G3.
Thus, in this study, we examined serum lipid profiles in Japanese patients with HCV G1b, which is the most prevalent HCV genotype in Japan [12,13]. Then, we describe the serum TG profiles of patients with active HCV G1b infection and further clarify the impact of HCV G1b infection on VLDL sub-fractions. In addition, we attempted to clarify whether there is a correlation between serum TG profile and liver fibrosis grade in HCV G1b infection.

2.3. Impact of Chronic Active HCV G1b Infection on the Concentration of TG in the Four Major Classes of Lipoproteins 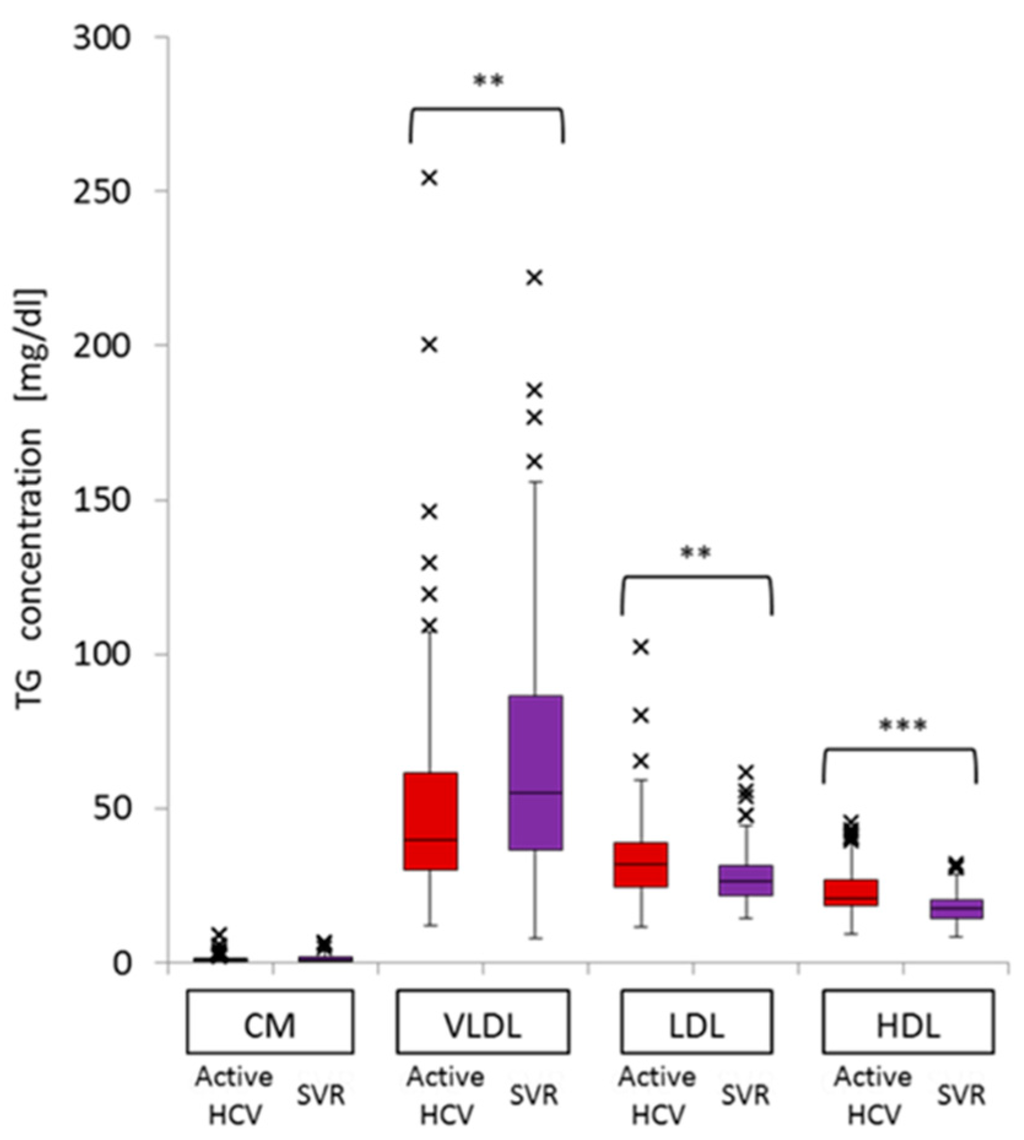 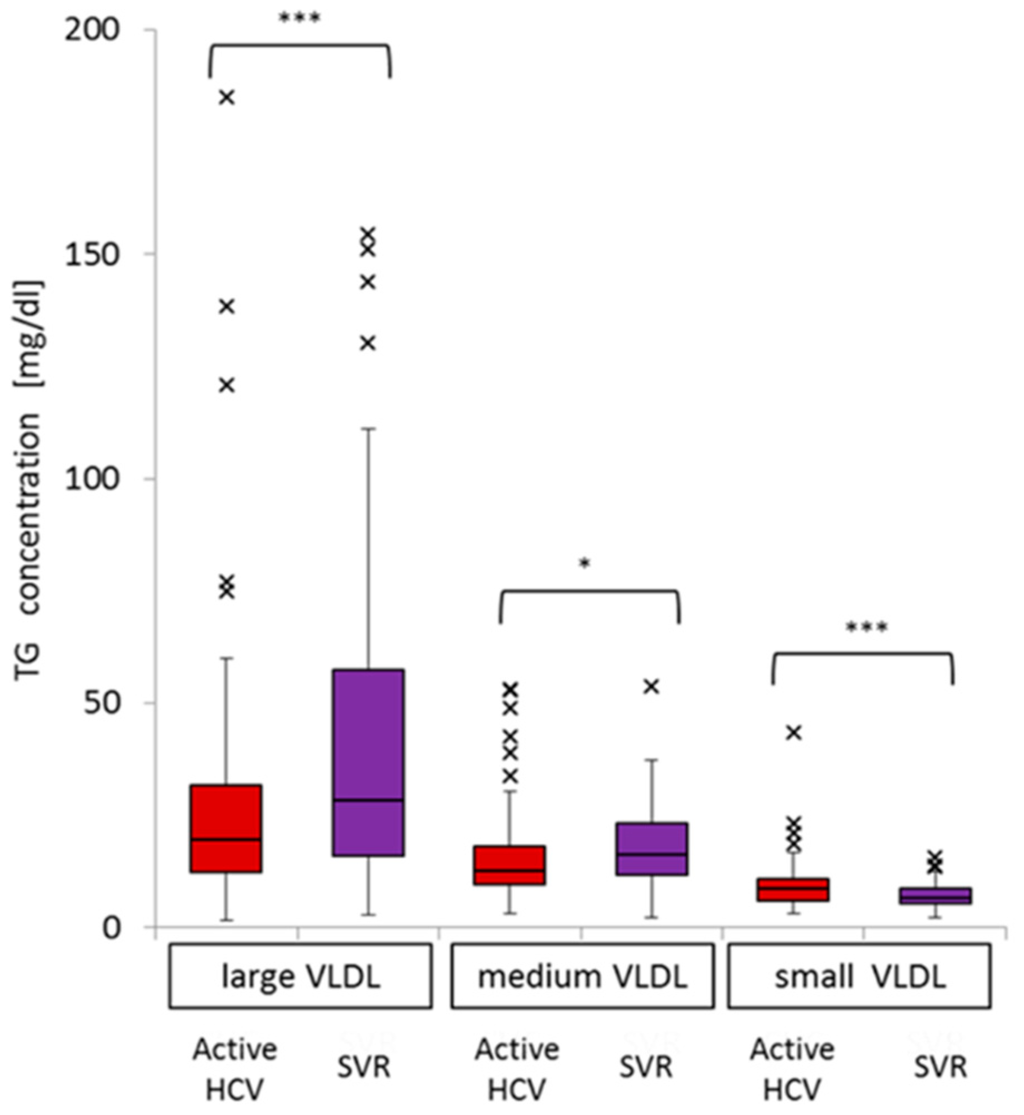 Table 3. Significance of active chronic HCV infection in the distribution of TG in the three VLDL sub-fractions analyzed by multiple regression models.

In 51 patients with advanced liver fibrosis and a FIB-4 index score above 3.25, the median age, as well as ALT and AST levels, were higher, and serum albumin level and platelet counts were lower, than those of 52 patients with mild-moderate fibrosis. There were fewer patients of male gender and non-TT IFNL3 genotype in the advanced fibrosis group than in the mild-moderate fibrosis group, but the differences were marginal. HCV-RNA and HbA1c levels were similar between the two groups. As for serum lipids, TC and LDL-C were significantly lower in the advanced fibrosis group, while TG and HDL-C serum levels were similar between the two groups (Table 4).

Table 4. Comparison of clinical features and the interferon lambda (IFNL) 3 genotype between HCV G1b patients with advanced fibrosis and those with mild-moderate fibrosis.

2.6. Difference in VLDL-TG, LDL-TG, and HDL-TG Serum Levels between Patients with Advanced Liver Fibrosis and Those with Mild-Moderate Fibrosis

Table 5. Significance of advanced liver fibrosis in the concentrations of VLDL-TG, LDL-TG, and HDL-TG, as analyzed using multiple regression models.

2.8. Significance of Advanced Fibrosis for Serum TG Concentrations in the Three Subclasses of VLDL 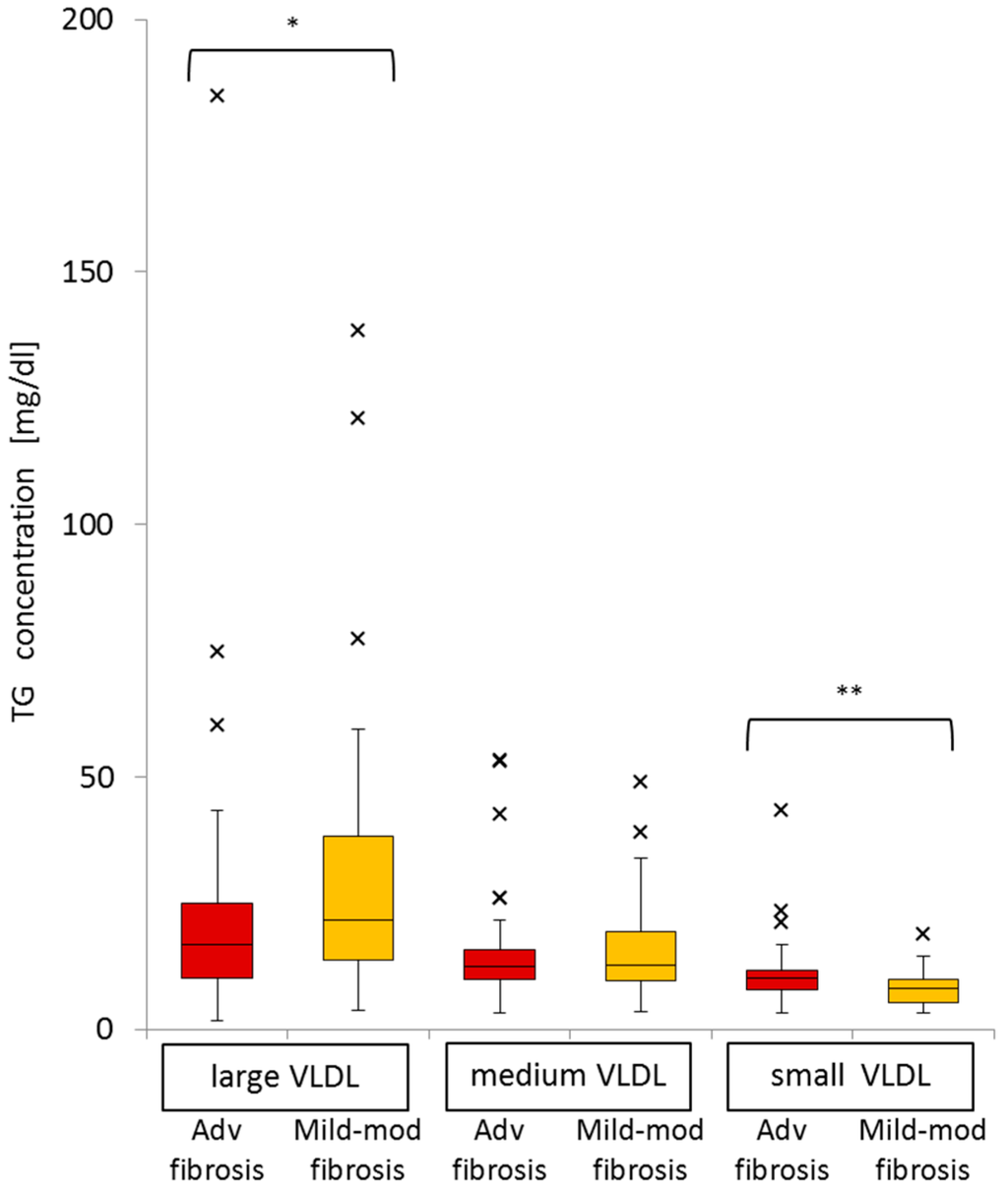 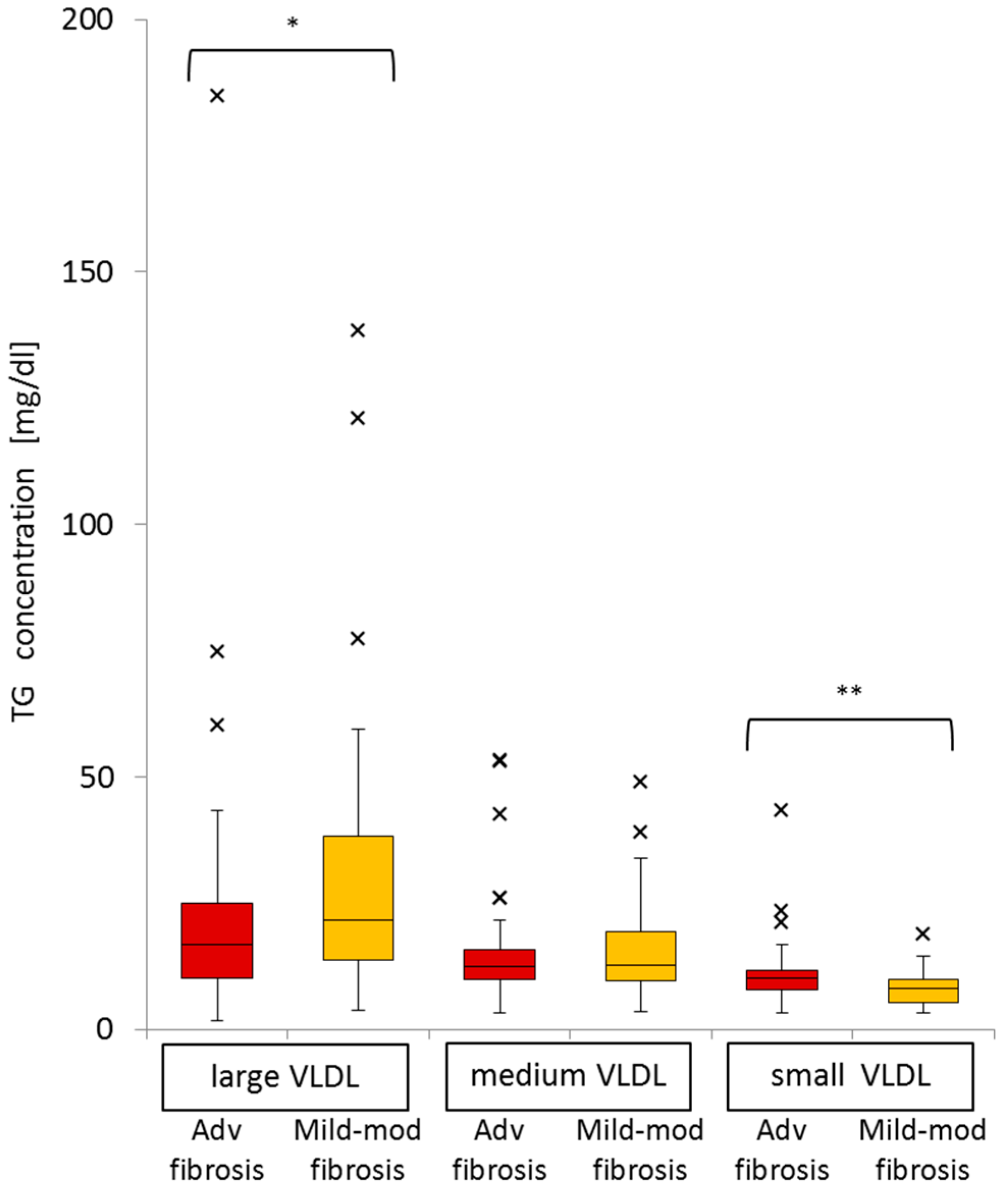 In total, 185 Japanese patients with active or cleared chronic HCV infection undergoing care at Jikei University Katsushika Medical Center from June 2013 to December 2014 were enrolled randomly in this study. Patients who had hepatocellular carcinoma, decompensated cirrhosis, other types of hepatitis, co-infected with human immunodeficiency virus or other viruses, habitual alcohol abuse, treatment of dyslipidemia, or diabetes were excluded from this study. Patients who were under antiviral therapy or finished antiviral therapy within 6 months of the time of enrollment were also excluded.
Among the enrolled patients, 103 patients had chronic active HCV G1b infection and 82 patients had undergone SVR defined as HCV-RNA being undetectable at least 24 weeks after receiving IFN-based antiviral therapy [42]. Almost all patients with cleared HCV infection were genotyped before receiving antiviral therapy, and 48 patients had been previously infected with G1b, while 33 had been infected with G2. The genotype of one patient was unknown.

The difference in TG profiles in the serum lipoprotein subclasses between patients with chronic active HCV G1b infection and cleared HCV infection were determined. Peripheral blood was obtained from all participants after an overnight fast of at least 10 h. The freshly separated serum was fractionated according to lipoprotein size, and the concentration of TG in each fraction was measured. The correlation of chronic active HCV G1b infection with serum TG profiles was examined.
In addition, liver fibrosis grade in chronic active HCV G1b infection was assessed, and the association of advanced liver fibrosis with serum TG profiles was investigated. The protocol for this trans-sectional study complied with the 2004 standards of the Declaration of Helsinki and current ethical guidelines and was approved by the human ethics review committee of the Jikei University School of Medicine (21-032 5610, 1 February 2010, a study of the association between lipoprotein metabolism and pathology in patients with CHC). Written informed consent was obtained from all patients who enrolled in this study.

Serum lipoproteins were fractionated by HPLC into 20 fractions and the concentration of TG in each fraction was measured using an online detection system (Skylight Biotech, Inc., Akita, Japan). According to the manufacturer’s instructions, serum lipoproteins were classified into four major fractions (CM, VLDL, LDL, and HDL) by particle size. Among 20 fractions, fractions 1–2 were classified as CM, fractions 3–7 as VLDL, fractions 8–13 as LDL, and fractions 14–20 as HDL. Furthermore, the VLDL fraction was divided into three sub-fractions: fractions 3–5 were large VLDL, fraction 6 was medium VLDL, and fraction 7 was small VLDL [43,44]. The mean particle size for each fraction is shown in Figure 1.

Demographic data including age, gender, and BMI, as well as blood samples for analyzing serum TG profiles including AST, ALT, γ-GTP, albumin, total bilirubin, platelet count, and HbA1c were collected from each patient.

TC, TG, and HDL-C were directly assayed using a commercially available conventional kit (Kyowa Medex, Tokyo, Japan). The concentration of LDL-C was calculated using the Friedewald equation because there were no patients whose serum fasting TG levels were ≥400 mg/dL [45].

The grade of hepatic fibrosis in chronic active HCV infection was evaluated by using the FIB-4 index, a simple and reliable noninvasive liver fibrosis marker that combines standard biochemical values (platelet count, ALT, and AST) and age. The FIB-4 index was calculated using the following equation: (age × AST)/(platelet count (×109 L−1) × ALT0.5), and a score above 3.25 was classified as advanced fibrosis [47,48].