The production and uptake of yolk protein play an important role in the reproduction of all oviparous organisms. Vitellogenin (Vg) is the precursor of vitellin (Vn), which is the major egg storage protein, and vitellogenin receptor (VgR) is a necessary protein for the uptake of Vg into developing oocytes. In this paper, we characterize the full-length Vg and VgR, PcVg1 and PcVgR, respectively, of the citrus red mite Panonychus citri (McGregor). The PcVg1 cDNA is 5748 nucleotides (nt) with a 5553-nt open reading frame (ORF) coding for 1851 amino acids (aa), and the PcVgR is 6090 nt, containing an intact ORF of 5673 nt coding an expected protein of 1891 aa. The PcVg1 aa sequence shows a typical GLCG domain and several K/RXXR cleavage sites, and PcVgR comprises two ligand-binding domains, two epidermal growth factor (EGF)-like regions containing YWTD motifs, a transmembrane domain, and a cytoplasmic domain. An analysis of the aa sequences and phylogenetics implied that both genes were genetically distinct from those of ticks and insects. The transcriptional profiles determined by real-time quantitative PCR in different developmental stages showed that both genes present the same expressional tendencies in eggs, larvae, nymphs, and adults. This suggested that the biosynthesis and uptake of PcVg occurs coordinately. The strong reproductive capacity of P. citri has been hypothesized as an important factor in its resistance; consequently, understanding the molecular mechanisms regulating Vg and VgR are fundamental for mite control. View Full-Text
Keywords: Panonychus citri; vitellogenin; vitellogenin receptor; cloning; relative expression Panonychus citri; vitellogenin; vitellogenin receptor; cloning; relative expression
►▼ Show Figures 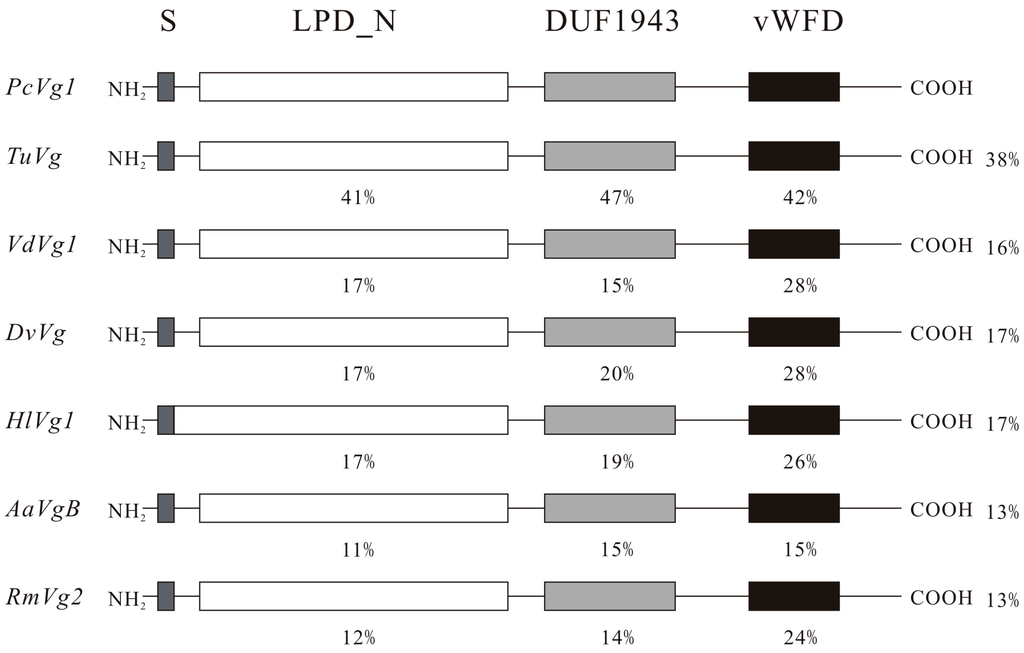