:
During parenchymal brain metastasis formation tumor cells need to migrate through cerebral endothelial cells, which form the morphological basis of the blood-brain barrier (BBB). The mechanisms of extravasation of tumor cells are highly uncharacterized, but in some aspects recapitulate the diapedesis of leukocytes. Extravasation of leukocytes through the BBB is decreased by the activation of type 2 cannabinoid receptors (CB2); therefore, in the present study we sought to investigate the role of CB2 receptors in the interaction of melanoma cells with the brain endothelium. First, we identified the presence of CB1, CB2(A), GPR18 (transcriptional variant 1) and GPR55 receptors in brain endothelial cells, while melanoma cells expressed CB1, CB2(A), GPR18 (transcriptional variants 1 and 2), GPR55 and GPR119. We observed that activation of CB2 receptors with JWH-133 reduced the adhesion of melanoma cells to the layer of brain endothelial cells. JWH-133 decreased the transendothelial migration rate of melanoma cells as well. Our results suggest that changes induced in endothelial cells are critical in the mediation of the effect of CB2 agonists. Our data identify CB2 as a potential target in reducing the number of brain metastastes originating from melanoma.
Keywords:
blood-brain barrier (BBB); cerebral metastasis; melanoma; cannabinoid; CB2

The blood-brain barrier (BBB) forms a protective shield between the central nervous system (CNS) and the systemic circulation, thus contributing substantially to the maintenance of the homeostasis of the CNS. The BBB serves as a barrier not only to solutes but restricts the free movement of cellular elements between the two compartments as well [1,2]. The barrier properties are mainly provided by cerebral endothelial cells interconnected by a continuous line of tight junctions [3,4]. The BBB plays a critical role in the pathogenesis and outcome of a large number of neurological disorders including neurodegenerative diseases, inflammatory processes of the brain, traumatic injury, stroke or brain tumors. BBB has a special importance in the formation of brain metastases of malignant tumors. Since the CNS lacks a lymphatic system, the only way of metastatic cells to reach the brain is to cross one of the principal barriers protecting the brain: the blood-CSF barrier or the blood-brain barrier. Since brain metastases are life threatening pathologies and our therapeutic possibilities in case of already formed brain metastasis are very limited, an optimal strategy would be the inhibition of transmigration of metastatic cells through the BBB [5].
The cannabinoid system is known mainly for its psychoactive effects; however, it has been previously shown that its activation may induce anti-inflammatory and neuroprotective processes as well [6,7]. Cannabinoids exert their effects mainly through two receptor types: CB1 and CB2 which mediate distinct effects. The psychoactive effect is mediated by the type 1 cannabinoid receptors (CB1), whereas the anti-inflammatory effects are mainly mediated by the type 2 cannabinoid receptors (CB2) actions [8]. CB1 is expressed mainly in the CNS, whereas CB2 is expressed predominantly in cells of the immune system and hematopoietic cells. In the brain CB2 receptors are found primarily on microglia [9], but endothelial cells also express this type of receptor [10,11].
Induction of cannabinoid-like effects by substances which do not activate CB1 or CB2 suggested the existence of other cannabinoid receptors as well. One such receptor is GPR18 which has been shown to bind N-arachidonoyl glycine (NAGly), an endogenous metabolite of anandamide [12]. GPR55 and GPR119 have also been shown to mediate the effect of cannabinoids [13].
Recently, we have shown that activation of CB2 improves barriers properties of the endothelial layer by increasing the amount of tight junction proteins in the membrane fractions [14]. Moreover, CB2 activation reduces the amount of ICAM-1 and VCAM-1 expression induced by inflammatory mediators in cerebral vascular endothelial cells and attenuates the adhesion and transmigration of leukocytes through the BBB.
However, no information is available about the role of the cannabinoid system in the transmigration of metastatic cells through the BBB. Since normal melanocytes and malignant melanoma share signaling similarity with the brain [15,16], we expected melanoma cells to respond to cannabinoid signals. Therefore, in this study we investigated the expression of different cannabinoid receptors in cerebral endothelial cells and determined the role of CB2 activation in the adhesion of melanoma cells to the cerebral endothelium and transmigration of these cells through the BBB.

Besides their well-known psychotropic effects, cannabinoids are able to regulate a wide range of physiological and pathological processes, including inflammation [17], angiogenesis [18] or cancer [19,20]. Due to the psychotropic effect of CB1 activation research has been focused mainly on CB2 receptors. Previous studies have demonstrated the expression of CB2 receptors mainly in peripheral tissues, particularly in immune cells [21]. In the CNS expression of CB2 receptors has been detected in microglial and perivascular cells (for review see: [22]) in response to neuroinflammatory processes. Endothelial cells including human umbilical vein endothelial cells, pulmonary artery endothelial cells [23] and brain microvascular endothelial cells [24] have also been described to express CB2 receptors. However, the expression profile of other receptors which could mediate the effect of cannabinoids is less well known. Therefore, in the first step of our investigations we determined the expression pattern of cannabinoid and cannabinoid-like receptors in cerebral endothelial cells by using RT-PCR. Cannabinoids may influence endothelial cell-immune cell interactions; however, it is not known whether they can regulate endothelial cell-cancer cell interactions as well. Since melanoma has the highest propensity to form brain metastases, we have also investigated the cannabinoid receptor expression profile in melanoma cells.
Our results demonstrate that hCMEC/D3 human brain endothelial cells and A2058 human melanoma cells express the CB2A transcriptional variant of the CB2 receptor but not the CB2B (Figure 1a,b). CB2A and CB2B differ in their untranslated 5′ region indicating that the two variants may differ in regulatory aspects only. CB2A has higher expression in the testis and the brain, whereas CB2B is expressed in higher amounts in peripheral tissues [25]. Primary rat brain endothelial cells were found to express variants 1 and 2 of CB2 receptor (Figure 1c,d). In addition hCMEC/D3 cells express CB1 receptor, GPR18 (transcriptional variant 1, but not transcriptional variant 2) and GPR55, whereas the presence of GPR119 was not detectable in this cell line (Figure 1e–i). Furthermore, we detected the presence of CB1, GPR18 transcriptional variants 1 and 2, GPR55 and GPR119 in A2058 melanoma cells (Figure 1e–i). These results complement previous data demonstrating the expression of CB1 and CB2 in melanoma cells [26].
Initially, GPR18 has been detected in testis and spleen [27], but it is expressed in the thymus, peripheral white blood cells and small intestine as well. No expression has been detected so far in the brain [28]. Under culture conditions it is expressed in metastatic melanoma [29], BV2 murine microglial cells [12] and HEC-1B human endometrial cells [30] as well. To our knowledge this is the first report of its expression in cerebral endothelial cells. However, further experiments are needed to understand the role of GPR18 splice variants.
GPR55 is another cannabinoid-like receptor which can be activated by N-arachidonoyl-serine, an endocannabinoid-like lipid with structural similarities to the endocannabinoid N-arachidonoyl ethanolamide (anandamide) [31]. N-arachidonoyl-serine promotes proliferation, migration and tube formation of primary human dermal microvascular endothelial cells, an effect at least partially mediated by GPR55 [32]. In the brain this receptor regulates microglia migration [33] and can be involved in microglia-mediated neuroprotection [34]. The role of GPR55 in cerebral endothelial cells is still unknown. In addition, GPR55 is expressed in malignant tumors as well including cholangiocarcinoma cells, melanoma cells or human squamous cell carcinomas. The role of GPR55 activation seems to be cell type specific: while in cholangiocarcinoma cells and melanoma cells activation of GPR55 has anti-proliferative or even toxic effects [35,36] in human squamous cell carcinomas drives skin carcinogenesis [37].
Furthermore, we have detected the expression of GPR119 in A2058 cells which is in accordance with previous results demonstrating the presence of this receptor in melanoma cells [29]. GPR119 was found in pancreatic and intestinal tissues and in some brain regions (for review see: [38]), but cerebral endothelial cells seem not to express this receptor.

2.2. Effect of CB2 Activation on the Adhesion of Melanoma Cells to the Brain Endothelium

2.3. Effect of CB2 Activation on the Transmigration of Melanoma Cells through Brain Endothelial Cell Layers

The selective CB2 agonist JWH-133 solution (diluted in Tocrisolve) was purchased from Tocris. The selective CB2 inverse agonist SR-144528 (dissolved in ethanol) [48,49] was from Santa Cruz, the MEK1/2 inhibitor U0126 was from Cell Signaling and the Gi/Goα inhibitor pertussis toxin (PTX) was from Sigma-Aldrich (Budapest, Hungary).

For transmigration experiments primary brain endothelial cells were used because of their superior barrier characteristics. RBECs were passed onto fibronectin/collagen-coated 8 μm pore size filter inserts (Millipore, Budapest, Hungary). After reaching confluence, endothelial cells were supplemented with 550 nM hydrocortisone, 250 μM CPT-cAMP (Sigma) and 17.5 μM Ro 20-1724 (Sigma) from the apical side and astrocyte-conditioned medium from the basolateral side for 24 h. 105 OG-labeled melanoma cells were plated into the upper chamber, onto the endothelial monolayer in serum-free medium and left for 5 h. The lower compartment was loaded with serum-free medium containing 100 μg/mL type I collagen. Cells were fixed with ethanol/acetic acid. Cells from the upper compartment were wiped off with a cotton swab. Transmigrated melanoma cells were counted using the Image-Pro Plus software.

Taken together, we have clarified the expression of classical and potential cannabinoid receptors on cerebral endothelial and melanoma cells and shown that activation of CB2 receptors reduces adhesion and transmigration of melanoma cells through the cerebral endothelium. This identifies CB2 as a potential target in reducing the number of brain metastases originating from melanoma. 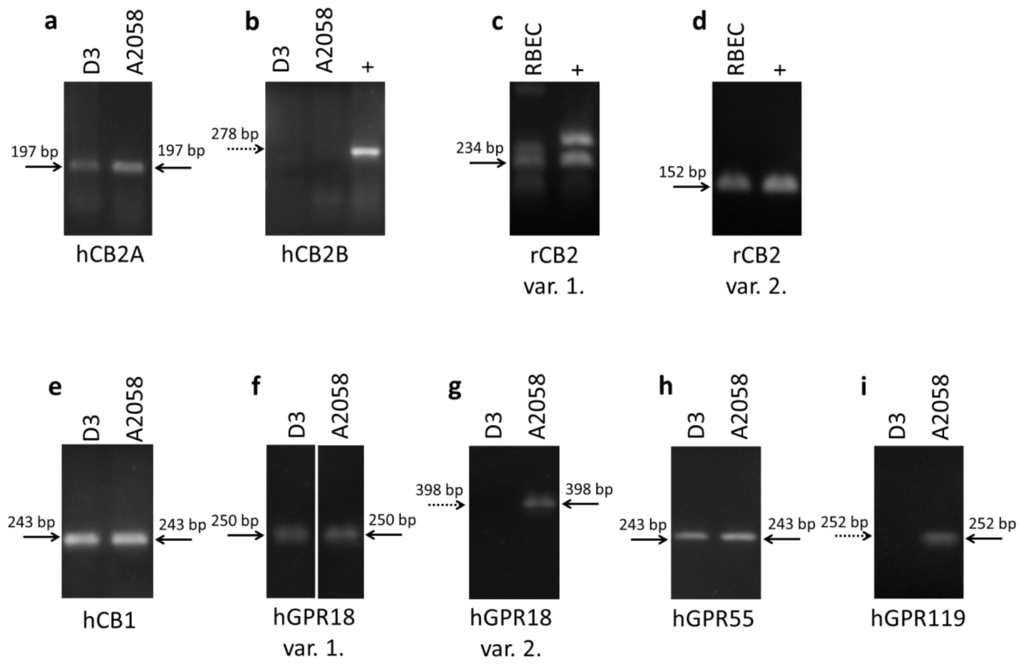 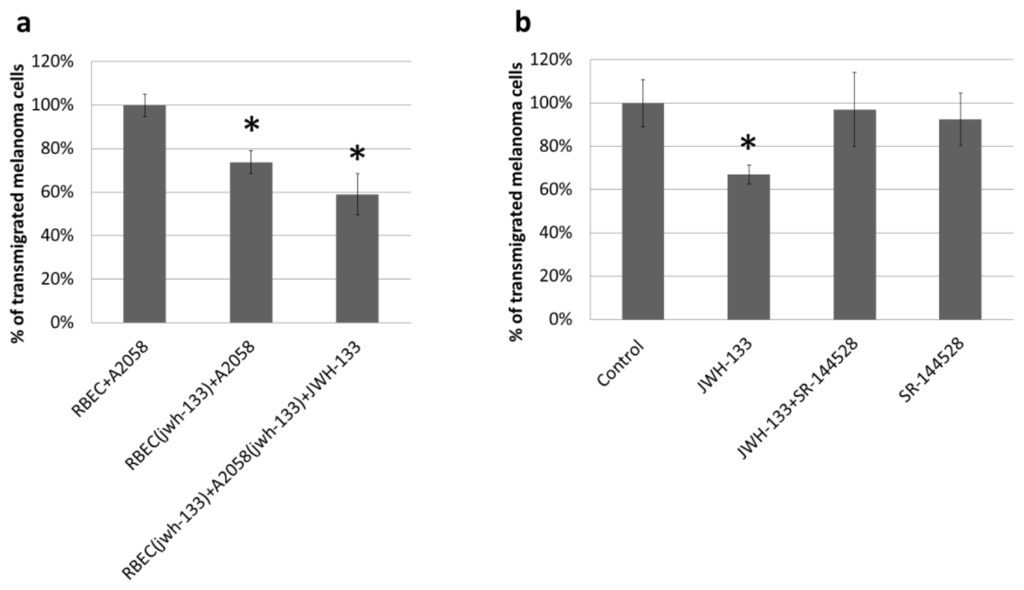 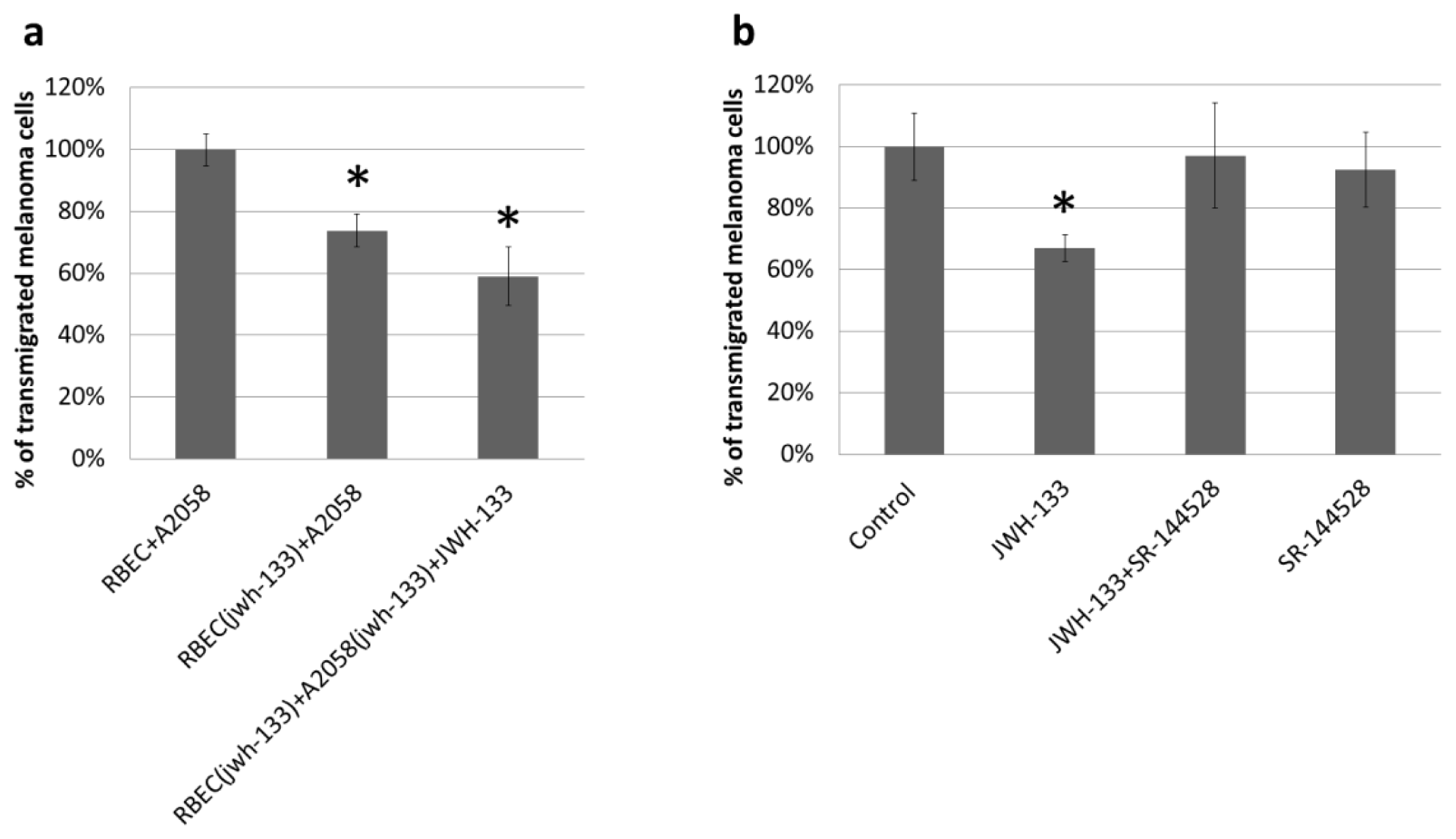