:
The purpose of the work was to study the impact of the endogenous nitric oxide synthase (NOS) inhibitor asymmetric dimethylarginine (ADMA) and its degrading enzyme, dimethylarginine dimethylaminohydrolase (DDAH1), on atherosclerosis in subtotally nephrectomized (SNX) ApoE-deficient mice. Male DDAH1 transgenic mice (TG, n = 39) and C57Bl/6J wild-type littermates (WT, n = 27) with or without the deletion of the ApoE gene underwent SNX at the age of eight weeks. Animals were sacrificed at 12 months of age, and blood chemistry, as well as the extent of atherosclerosis within the entire aorta were analyzed. Sham treated (no renal mass reduction) ApoE-competent DDAH1 transgenic and wild-type littermates (n = 11) served as a control group. Overexpression of DDAH1 was associated with significantly lower ADMA levels in all treatment groups. Surprisingly, SNX mice did not exhibit higher ADMA levels compared to sham treated control mice. Furthermore, the degree of atherosclerosis in ApoE-deficient mice with SNX was similar in mice with or without overexpression of DDAH1. Overexpression of the ADMA degrading enzyme, DDAH1, did not ameliorate atherosclerosis in ApoE-deficient SNX mice. Furthermore, SNX in mice had no impact on ADMA levels, suggesting a minor role of this molecule in chronic kidney disease (CKD) in this mouse model.
Keywords:
ADMA; subtotal nephrectomy; atherosclerosis

Asymmetrical dimethylarginine (ADMA), an endogenous inhibitor of nitric oxide synthase (NOS), is increasingly recognized as a novel biomarker in cardiovascular disease [1]. The molecule competes with the amino acid, l-arginine, as substrate for all three NOS enzymes and, thereby, limits NO bioavailability. All major known cardiovascular risk factors have been linked to elevated ADMA levels [1]. In addition, various genetic mouse models that modulate ADMA plasma levels emphasize a fundamental role of this NOS inhibitor in vascular pathobiology [2–6].
ADMA does not derive from direct methylation of free l-arginine, but is rather generated from the posttranslational methylation of l-arginine residues within proteins catalyzed by a family of enzymes, called protein arginine methyltransferases (PRMT) [7]. To date, nine PRMT genes have been cloned (PRMT1–9). Based on substrate and product specificity, PRMTs are divided into enzymes with Type I or Type II activity. Both types form monomethyl l-arginine (l-NMMA), but differ in that Type I enzymes produce ADMA, whereas Type II enzymes generate symmetrical dimethylarginine (SDMA) [7]. Upon proteolysis, methylarginines are released into the circulation, where ADMA competes with l-arginine for NOS. ADMA is in part cleared from the circulation via renal excretion and hepatic metabolism; however, the vast majority is metabolized via enzymatic degradation through an enzyme called dimethylarginine dimethylaminohydrolase (DDAH). This enzyme, of which two isoforms with distinct tissue distribution have been identified, catalyzes the hydrolysis of l-NMMA and ADMA into l-citrulline and mono- or di-methylamine [8].
Based on the generation and metabolism of ADMA, elevated levels are the consequence of increased synthesis (enhanced activity or expression of PRMTs), reduced renal clearance or reduced enzymatic degradation (decreased activity or expression of DDAH). The latter two mechanisms have been shown to contribute to elevations of ADMA in renal disease, a condition in which ADMA seems to accumulate [9–12]. In the last few decades, a variety of studies investigated the role of ADMA in patients with different stages of chronic kidney disease (CKD), as well as patients with end-stage renal disease (ESRD). Most studies demonstrate a marked increase of ADMA in patients with renal failure, although the range of reported ADMA levels is wide and overlaps with plasma levels that have been measured in healthy individuals [13].
We have recently generated and characterized transgenic (TG) mice that overexpress the human Isoform 1 of DDAH under control of a β-actin promoter in C57Bl/6J mice [2,5,14]. These animals have lower ADMA levels and an enhanced tissue NOS and DDAH enzyme activity [2]. In a mouse model of atherosclerosis (ApoE-deficient mice), DDAH1 overexpression ameliorated atherosclerotic lesion formation and vascular endothelial function within the aorta [5].
In the present study, we assessed the impact of CKD on the ADMA/DDAH axis in atherosclerosis by studying atherosclerotic lesion formation in subtotally nephrectomized (SNX) ApoE-deficient mice with or without overexpression of DDAH1. We hypothesized that mice with CKD display elevated ADMA levels and that DDAH1 overexpression abrogates atherosclerotic lesion formation in this mouse model.

In all of the three treatment groups, DDAH1 TG mice had a higher body weight at the time point of sacrifice (ANOVA p = 0.043, Table 1). In mice with SNX, remnant kidney weight did not differ between WT and TG mice. Blood pressure measured via carotid artery catheters did not differ between treatment groups and genotypes. Creatinine and urea were only mildly, yet significantly, elevated in SNX mice (Table 1). However, histological analysis of remnant kidneys revealed marked glomerulosclerosis as evidenced by markedly elevated Collagen IV deposition (Table 1). In addition, marked glomerular hypertrophy was noted in subtotally nephrectomized mice.
As expected, cholesterol, as well as triglyceride levels were significantly elevated in ApoE-deficient mice of Group 3. Animals in this group had a lower serum albumin compared to mice from other groups (Table 1).
Arterial blood gases obtained at sacrifice were similar between sham treated versus SNX mice and across different genotypes, except for lower hemoglobin and hematocrit in SNX mice (Table 2).

2.2. Measurement of Methylarginines and l-Arginine

In all of the three treatment groups, mice overexpressing DDAH1 had markedly lower plasma ADMA levels (35%–50% lower versus wild-type (WT) mice; Table 1, Figure 1). Intriguingly, neither SNX nor ApoE-deficiency with SNX was associated with elevated ADMA levels. Thus, within WT and TG mice of different treatment groups, ADMA levels were very similar (Table 1, Figure 1). SDMA levels were only slightly elevated in SNX mice, and the increase was only observed in DDAH1 TG mice that overall had lower SDMA levels than respective WT littermates (Table 1). In WT mice, SDMA levels were similar in sham versus SNX treated mice (Table 1). Plasma l-arginine levels did not differ between treatment groups and genotypes. Accordingly, the l-arginine/ADMA ratio was significantly elevated in mice overexpressing DDAH1. Since SDMA is not metabolized by DDAH enzymes, we observed a significant correlation between serum creatinine levels and SDMA, but not ADMA (Figure 2). As previously shown [14], ADMA levels measured by the use of an ELISA assay were slightly higher compared to those obtained with LC-MS (see Table 1). Overall, there was a robust correlation of ADMA levels detected with either method (r = 0.82, p = 0.0001).

2.3. En Face Preparations of the Aorta

None of the animals of Group 1 or 2 (ApoE-competent mice with or without SNX) developed atherosclerotic lesions within the aorta (data not shown). In ApoE-deficient SNX mice, the degree of plaque formation within the aorta tended to be somewhat lower in DDAH1 overexpressing mice; however, the difference did not reach statistical significance (Figure 3).
There was a robust correlation between phosphate levels and calcium-phosphate product and atherosclerosis in ApoE-deficient SNX mice (Figure 4).

2.4. Histomorphometry and Immunohistochemistry of the Brachiocephalic Trunk

Cross-sectional analysis of plaques within the brachiocephalic trunk in mice of Group 3 revealed no apparent differences in plaque morphology or plaque composition between WT and TG mice. In particular, luminal narrowing, medial thickening, as well as vascular calcification (von Kossa staining) and inflammation (CD68 immunohistochemistry) were similar between the two genotypes (Figure 5).

Human DDAH1 TG mice (hDDAH1+/−) were generated, maintained and genotyped as previously described in detail [5]. ApoE-deficient mice (ApoE−/−) were purchased from Jackson Laboratories (Apoetm1Unc, stock Number: 002052) and were backcrossed into C57Bl/6J background for ten generations.
Genotyping was performed according to the PCR protocol provided by the vendor.
ApoE−/−/hDDAH1+/− mice were generated as previously described [5].
All animals were housed in a temperature-controlled animal facility with a 12-h light/dark cycle and free access to tap water and standard rodent chow. Mice were sacrificed in the morning hours during 08:00–12:00 am.
The study protocol was approved by the animal research ethics committee of the local government (Bezirksregierung Mittelfranken, AZ 54-2531.31-1/06).

Mice of experimental Groups 2 and 3 underwent SNX. Briefly, at 8 weeks of age, a right-sided nephrectomy or sham surgery (Group 1) was performed via a flank incision. Two weeks later, the upper and lower thirds of the left kidney were resected and weighed to achieve SNX, or a sham procedure (Group 1) was performed.

Before sacrifice, blood pressure was measured via carotid artery catheters in conscious mice. Briefly, the right carotid artery was exposed and cannulated with a polyethylene tubing catheter under inhalation anesthesia (isoflurane 2%). The catheter was secured with sutures and subcutaneously tunneled to exit at the back of the neck. The end of the catheter was connected to a Statham pressure transducer and a Gould polygraph. After recovery from the surgical procedure, blood pressure was measured in conscious, restrained animals over 20 min.

4.5. Measurement of Methylarginines and l-Arginine

Plasma levels of l-arginine, ADMA, as well as symmetric dimethylarginine (SDMA) were measured by use of liquid chromatographic-tandem mass spectrometry, as previously described [14]. In addition, ADMA was also measured by use of a commercially available ELISA assay, as previously described [14]. Samples were measured in duplicate, and mean values were computed; the intra-assay coefficient of variation was <6%.

4.6. En Face Preparations of the Aorta

Atherosclerosis within the aorta was analyzed in mice of Group 3 (n = 30) by performing Sudan IV stained en face preparations spanning the entire aorta from the aortic root to the iliac bifurcation, as recently described in detail [5].
Native, as well as Sudan IV stained preparations were captured with a digital camera attached to the microscope. Atherosclerotic lesions were quantified by using image analysis software (MetaVue version 4.6r9; Molecular Devices, Sunnyvale, CA, USA), and the lesion area was expressed as a percentage of total aortic surface area.

4.7. Histomorphometry and Immunohistochemistry of the Brachiocephalic Trunk and Remnant Kidneys

Statistical analysis was performed by using the SPSS software package (version 16.0; SPSS Inc., Chicago, IL, USA). Differences between WT and TG mice in each subgroup were first analyzed by using the unpaired t-test. Differences between the three study groups were further analyzed by using one-way analysis of variance with post hoc Bonferroni correction. In addition, a univariate linear model was used to analyze the effects of SNX, as well as DDAH1 or ApoE genotype throughout the three treatment groups. Pearson correlation coefficients were calculated when indicated. All data are given as the mean ± SD. Statistical significance was accepted at a value of p < 0.05 (two-sided).

In conclusion, plasma levels of ADMA are unaltered in our SNX model of CKD in mice. In addition, overexpression of the ADMA degrading enzyme, DDAH1, in SNX treated ApoE-deficient mice does not ameliorate atherosclerosis. Our data clearly do not support the notion that ADMA plays a particularly important role for atherosclerosis in CKD.

We are indebted to Rainer Wachtveitl for expert technical assistance.
This project was supported by the Interdisciplinary Center for Clinical Research (IZKF) at the University Hospital of the University of Erlangen-Nuremberg (Project F2). We acknowledge support by Deutsche Forschungsgemeinschaft and Friedrich-Alexander-Universität Erlangen-Nürnberg (FAU) within the funding program Open Access Publishing. 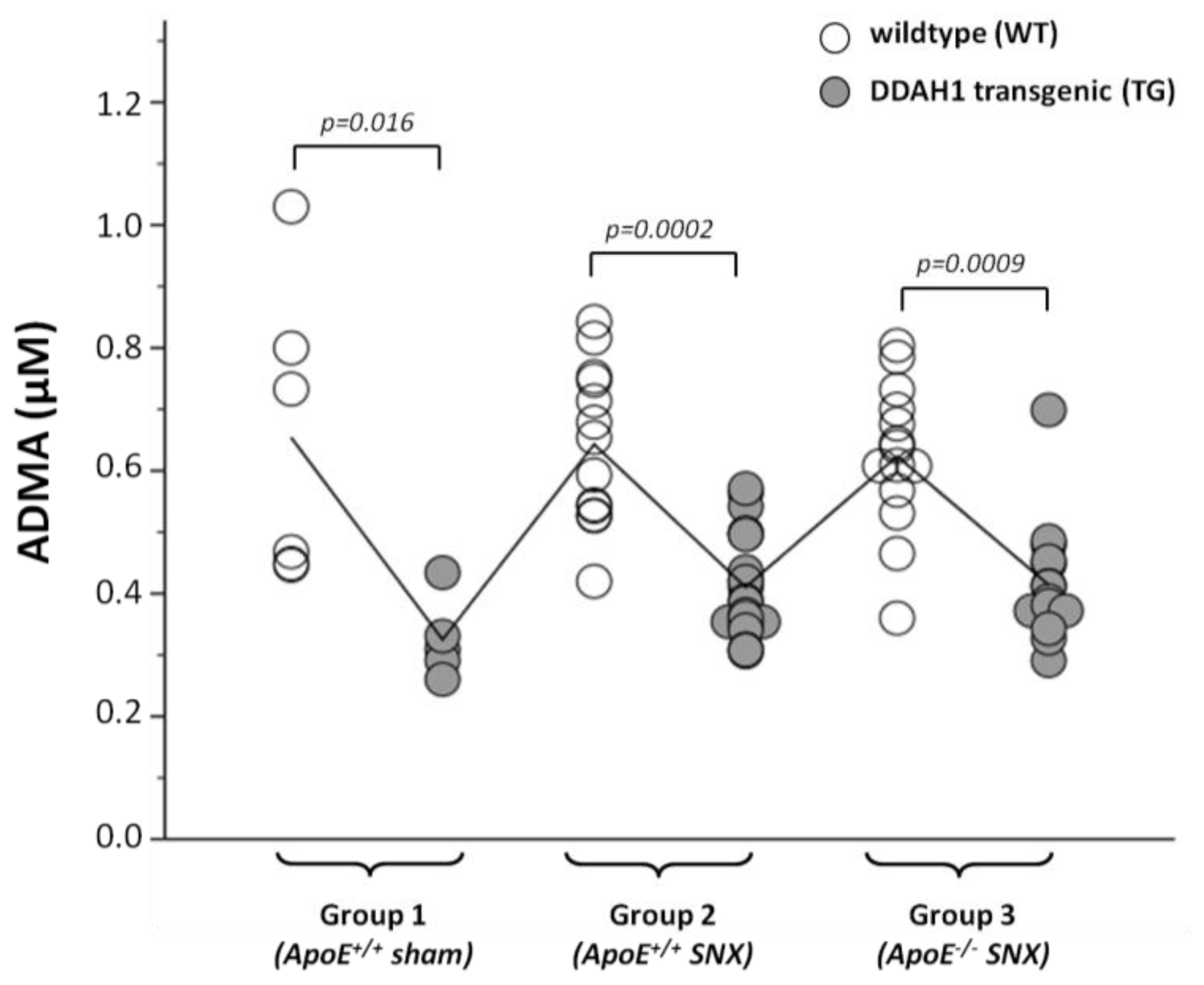 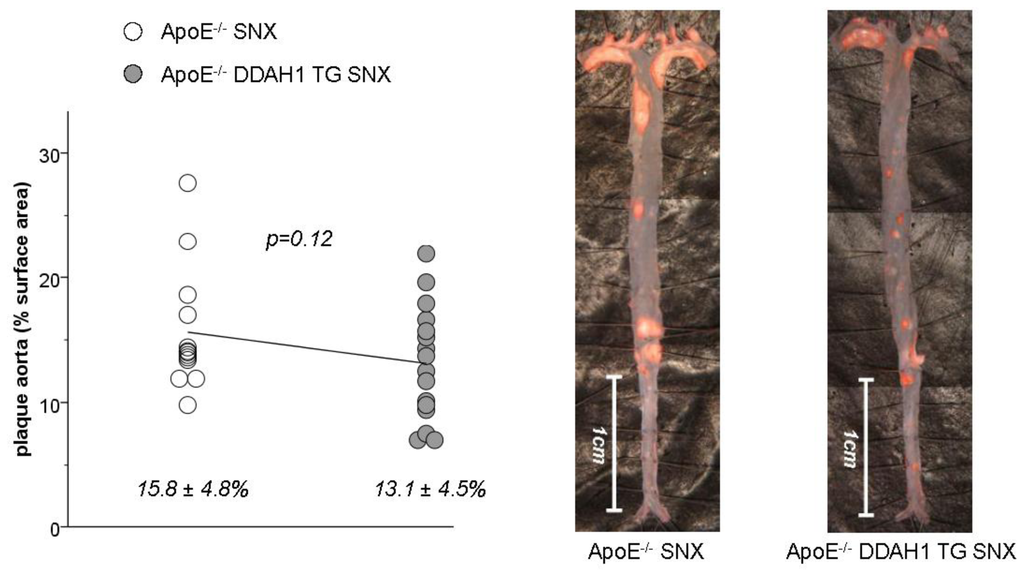