Cytotoxicity Evaluation of a New Set of 2-Aminobenzo[de]iso-quinoline-1,3-diones
Previous Article in Journal

Recent Advances in Food-Packing, Pharmaceutical and Biomedical Applications of Zein and Zein-Based Materials

Insulin-like growth factor-I (IGF-I) plays an important role in the growth and development of vertebrates. To study polymorphisms of IGF-I, we screened a total of 4555 bp of genomic sequences in four exons and partial introns for the discovery of single nucleotide polymorphism (SNP) in common carp (Cyprinus carpio). Three SNPs (g.3759T>G, g.7627T>A and g.7722T>C) in intron 2 and a nonsynonymous SNP (g.7892C>T) in exon 3 were identified in a pilot population including random parents and their progenies. 289 progenies were further genotyped for studying possible associations between genotypes or combined genotypes and growth traits. The results showed that the locus g.7627T>A was significantly associated with body weight and body length, and fish with genotype AA had a mean body weight 5.9% higher than those with genotype TT. No significant associations were observed between genotypes of other loci and growth traits. However, when both g.7627T>A and g.7722T>C were considered, the combined genotype TT/TT was extremely associated with the lowest values of body length and body weight and the highest K value in comparison with other diplotypes (p < 0.01). These results suggest that genotype AA at g.7627T>A and its combined genotypes with alleles from another locus have positive effects on growth traits, which would be a candidate molecular marker for further studies in marker-assisted selection in common carp. View Full-Text
Keywords: common carp; IGF-I; SNP; growth trait; association study common carp; IGF-I; SNP; growth trait; association study
►▼ Show Figures 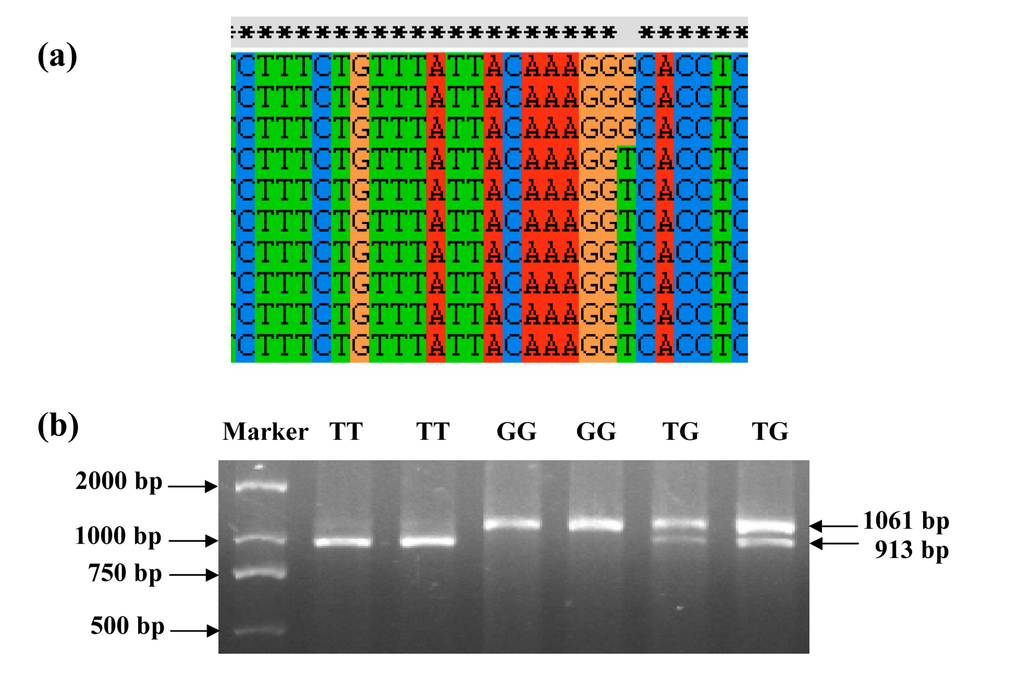