Phelipanche ramosa is a parasitic plant that infects numerous crops worldwide. In Western Europe it recently expanded to a new host crop, oilseed rape, in which it can cause severe yield losses. We developed 13 microsatellite markers for P. ramosa using next-generation 454 sequencing data. The polymorphism at each locus was assessed in a sample of 96 individuals collected in France within 6 fields cultivated with tobacco, hemp or oilseed rape. Two loci were monomorphic. At the other 11 loci, the number of alleles and the expected heterozygosity ranged from 3 to 6 and from 0.31 to 0.60, respectively. Genetic diversity within each cultivated field was very low. The host crop from which individuals were collected was the key factor structuring genetic variation. Individuals collected on oilseed rape were strongly differentiated from individuals collected on hemp or tobacco, which suggests that P. ramosa infecting oilseed rape forms a genetically diverged race. The microsatellites we developed will be useful for population genetics studies and for elucidating host-associated genetic divergence in P. ramosa. View Full-Text
Keywords: Phelipanche ramosa; parasitic plant; microsatellite markers; genetic diversity; host races Phelipanche ramosa; parasitic plant; microsatellite markers; genetic diversity; host races
►▼ Show Figures 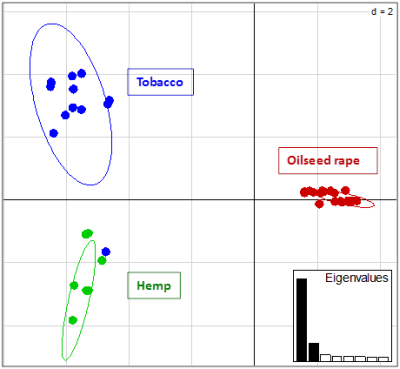