Prostate cancer (PC) is a frequent male malignancy and represents the second most diagnosed cancer in men. Since pre-cancerous lesions, i.e., the high-grade prostatic intraepithelial neoplasia (HGPIN), can be detected years before progression to PC, early diagnosis and chemoprevention are targeted strategies to reduce PC rates. Animal studies have shown that lycopene, a carotenoid contained in tomatoes, is a promising candidate for the chemoprevention of PC. However, its efficacy in humans remains controversial. The present study aimed to investigate the relevance of plasma and prostate concentration of lycopene after a lycopene-enriched diet in patients diagnosed with HGPIN. Thirty-two patients diagnosed with HGPIN were administered a lycopene-enriched diet (20–25 mg/day of lycopene; through 30 g/day of triple concentrated tomato paste) for 6 months. A 6-month follow-up prostate biopsy assessed progression to PC. Patients were classified into three groups according to the histopathological features of the 6-month follow-up biopsy results: prostatitis; HGPIN and PC. PSA and plasma lycopene levels were measured before and after the dietary lycopene supplementation. Prostatic lycopene concentration was only assessed after the supplementation diet. Only prostatic lycopene concentration showed significant differences between the three groups (p = 0.03). Prostatic lycopene concentration below a 1 ng/mg threshold was associated with PC at 6-month follow-up biopsy (p = 0.003). We observed no overall benefits from a 6-month lycopene supplementation, as the rate of HGPIN progression to PC in our population (9/32, 28%) was similar to rates reported in the literature. Baseline PSA levels also showed no significant changes after a lycopene-enriched diet. Our findings point to prostatic lycopene concentration as a promising biomarker of PC. Further prospective longitudinal studies are needed to assess the prognostic role of prostatic lycopene in PC. View Full-Text
Keywords: lycopene; prostate cancer; prostatic lycopene; HGPIN lycopene; prostate cancer; prostatic lycopene; HGPIN
►▼ Show Figures 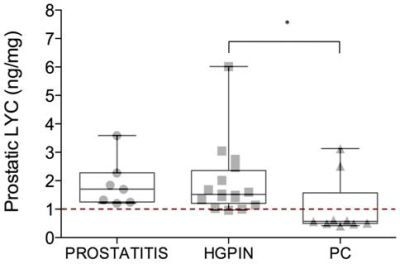