Anthocyanins are a group of common phenolic compounds in plants. They are mainly detected in flowers and fruits, are believed to play different important roles such as in the attraction of animals and seed dispersal, and also in the increase of the antioxidant response in tissues directly or indirectly affected by biotic or abiotic stress factors. As a major group of secondary metabolites in plants commonly consumed as food, they are of importance in both the food industry and human nutrition. It is known that arbuscular mycorrhizal (AM) fungi can influence the plant secondary metabolic pathways such as the synthesis of essential oils in aromatic plants, of secondary metabolites in roots, and increase flavonoid concentration. Plant Growth-Promoting Bacteria (PGPB) are able to increase plant growth, improving plant nutrition and supporting plant development under natural or stressed conditions. Various studies confirmed that a number of bacterial species living on and inside the root system are beneficial for plant growth, yield and crop quality. In this work it is shown that inoculation with AM fungi and/or with selected and tested Pseudomonas strains, under conditions of reduced fertilization, increases anthocyanin concentration in the fruits of strawberry.
Keywords: anthocyanin; high performance liquid chromatography (HPLC); arbuscular mycorrhizae; plant growth-promoting bacteria; low fertilization anthocyanin; high performance liquid chromatography (HPLC); arbuscular mycorrhizae; plant growth-promoting bacteria; low fertilization

Anthocyanins are a group of widespread natural phenolic compounds in plants. They are mainly detected in flowers and fruits (especially in berries) and are responsible for bright colours such as orange, red and blue [1]. In strawberries, anthocyanin concentration correlates well with the darkness of the fruits [2]. Strawberry has a simple anthocyanin profile with only a few major pigments. The total anthocyanin concentration in ripe fruits of strawberry was observed to vary between 200 and 600 mg/kg [2], but lower concentrations were also reported [3,4].
Anthocyanins are glycosides and acylglycosides (even if strawberry anthocyanins are reported to be non-acylated [2]) of anthocyanidins. Anthocyanidins vary with different hydroxyl or methoxyl substitutions in their basic structure, which is a flavylium cation [1]. Anthocyanins are believed to play different important roles such as in the attraction of animals and seed dispersal, and also in the increase of the antioxidant response in tissues directly or indirectly affected by biotic or abiotic stress factors [5]. As a major group of secondary metabolites in plants commonly consumed as food, they are of importance in both the food industry and human nutrition. Recently, increased attention has been given to their possible health benefits in preventing chronic and degenerative diseases, including heart disease and cancer [6]. These effects were partly attributed to their antioxidant capability [7,8].
It is known that beneficial soil microorganisms, like bacteria and arbuscular mycorrhizal (AM) fungi can influence the plant secondary metabolic pathways [9]. AM fungi, which establish mutualistic symbioses with the root systems of about 80% of land plant species, including the most important agricultural crops [10], are known to improve the plant mineral nutrition [10] and to modulate (often in a species-specific manner) the synthesis of essential oils in aromatic plants [11] and of secondary metabolites in roots [12–14]. Moreover, in alfalfa (Medicago sativa L.), barrel medic (Medicago truncatula), red clover (Trifolium pratense) and soybean (Glycine max L.) AM colonization increases flavonoid concentration [15–20]. In strawberry fruits, Glomus intraradices colonization increase cyanidin-3-glucoside concentration [21]. In addition, inoculation with AM fungi was shown to improve the quality of some crops such as artichoke [22] tomato [23,24] and maize [25], increasing the concentration of antioxidant molecules. Improved food quality can positively impact human health and reduce the costs for health care [26]. Increased quality, in terms of taste and nutritional value, can also become an additional target in agriculture, since, in recent years, consumers have sharpened their attention on all the aspects regarding the quality of foods and agricultural products in relation to health and environmental concerns.
Plant Growth-Promoting Bacteria (PGPB) improve plant nutrition, and support plant development under natural or stressed environments. This beneficial activity on plant growth can be exploited in order to realize cultivation protocols based on reduced amount of fertilizers and pesticides [27–29].
The mechanisms responsible for the stimulation of plant growth activated by PGPB can be both direct and indirect and involve: the biosynthesis of plant signaling molecules; the reduction of stress-ethylene in plants; the improvement of nutrient uptake (via fixation of N2 and phosphate solubilization); the synthesis of siderophores, antibiotics, enzymes and fungicidal molecules and niche competition, resulting in antagonistic activity against phytopathogenic microorganisms [30].
Since both AM fungi and PGPB can improve plant nutrition, their use in agriculture might result in reduced chemical inputs. High levels of fertilization, frequently occurring in intensive agriculture, negatively impact mycorrhizal colonization [10], constitute a significant cost for the producers and are a potential cause of eutrophication and pollution [31].
Therefore, the aim of this work was to demonstrate that the use of a consortium of AM fungi in combination with selected and tested Pseudomonas strains, in conditions of reduced fertilization (in particular phosphorus and nitrogen supply) induced an increased concentration of anthocyanins in strawberry fruits.

At the end of the experiment the extent of AM colonization (M%) ranged between 2% and 4%. Traces of mycorrhizal colonization (M% always < 0.15) were detected in uninoculated plants. Roots of plants inoculated only with the AM fungi were colonized at a low extent (M% 3.0 ± 0.6). Co-inoculation AM fungi and the two bacterial strains resulted in similar values: 2.0 + 0.4 for P. fluorescens Pf4 and 4.1 ± 0.7 for Pseudomonas sp. 5Vm1K.

2.3. Nitrogen and Phosphorus Concentrations in the Plant Organs

Frigo plantlets of a commercial variety of strawberry (Fragaria × ananassa var. Selva) with continuous flowering habit were used.
A mycorrhizal inoculum consisting of sporocarps, spores, hyphae, and root fragments colonized by a number of AM fungi (all of them belonging to the genus Glomus), collected from an agricultural soil where potatoes and carrots were grown, was produced and provided by Mybasol s.r.l. (Alessandria, Italy).
Two bacterial strains were used to inoculate the plants, alone or in combination with the mycorrhizal inoculum. Pseudomonas fluorescens strain Pf4 (briefly: Pf4) was isolated from a woody soil located in Sassello (Savona, Italy). Pf4 synthesizes siderophores, is able to solubilize phosphates at neutral, acid and alkaline pH and produces the phytohormone IAA as reported in Berta et al. [25].
Pseudomonas sp. 5Vm1K (abbreviated: 5Vm1K) was isolated from the rhizosphere of Vaccinium myrtillus and grown in a larch woodland located in Bellino (CN, Italy) and characterized as described by Bona et al. [57].

Fruits were harvested from April to September when most of their surface reached a full red colour, from April to September. Sepals were discarded and only fruit flesh was used for further analyses [63]. Harvested fruits were immediately frozen in liquid nitrogen and stored at −80 °C for biochemical analyses.
After 22 weeks of growth, the plants were harvested. The roots were separated from the aerial part and washed with deionised water. Roots from each plant were stored in 70% ethanol for mycorrhizal assay.

Forty randomly chosen 1 cm-long pieces were cut from each root system, fixed in 70% ethanol, and then stored at 4 °C until analysis. Root pieces were cleared in 10% KOH for 45 min at 60 °C, stained with 1% methyl blue in lactic acid and mounted on a slide. Mycorrhizal colonization was estimated according to Trouvelot et al. [64].

The total fruit production of each treatment was divided into three parts according to the harvest time (roughly corresponding to the months of June, July and August). The concentration of two anthocyanins (pelargonidin and cyanidin) was measured on fruit homogenates.
Anthocyanins were extracted and separated according to Comandini et al. [65] with some modifications. 10 grams of fruit homogenate were mixed with 10 mL of methanol (Sigma-Aldrich, St. Louis, MO, USA) for 1 min. The extract was centrifuged at 13,000 rpm for 30 min at 10 °C. The supernatant was collected and a second extraction was performed on the sample residue with 10 mL of 95% aqueous methanol. The solid residue and the hydro-alcoholic were first homogenized and then centrifuged at 13,000 rpm for 10 min at 10 °C. The supernatants of the two extractions were combined and concentrated in a speedvac (concentrator 5301, Eppendorf, Hamburg, Germany). The concentrated extract was dissolved in 5 mL acidified water (3% formic acid) and run on a SPE Discovery C18 Cartridge (500 mg/6 mL) (Supelco, Bellefonte, PA, USA), previously activated with methanol followed by HPLC-grade water and by 3% aqueous formic acid. Anthocyanin and other phenolic compounds were recovered with 2 mL of methanol containing 3% formic acid. Methanol extracts were filtered through 0.22 μm filters and injected in a HPLC instrument (Dionex, Sunnyvale, CA, USA) consisting of a solvent delivery system (Ultimate 3000 pump LPG-3400A) with an integrated vacuum degasser and mixing chamber, a detector (UVD-3000), an auto-sampler (WPS-3000TSL Analytical), a pump control and a data analysis system (Chromeleon 6.70 SP7). Anthocyanins were separated with a pre-column (or guard column- Aphera C18 polymer 15 cm × 4.6 mm, 5 μm) and an analytical column (Aphera C18 polymer 25 cm × 4.6 mm, 5 μm) at a flow rate of 0.5 mL/min, at 30 °C. The separation of anthocyanin was performed with a mobile phase composed of a solvent A (2.5% v/v formic acid in HPLC-grade water) and a solvent B (2.5% v/v formic acid in HPLC-grade methanol). The following linear elution gradient was employed: from the beginning to 5 min, 85% solvent A and 15% Solvent B; from 5 to 20 min, solvent A increased up to 65% and held constant until 25 min; from 25 to 35 min solvent A decreased to 50% and then was kept constant until 45 min; from 45 to 50 min solvent A decreased to 34%; finally, the columns were washed and restored to 85% solvent A. The total run time was 80 min. Anthocyanins were detected at 510 nm (injection volume 20 μL).
Each anthocyanin was quantified according to Chandra et al. [66]. Commercially available standards of pelargonidin chloride and cyaniding chloride were used as stock solutions for generating a five-point calibration curve.
The amounts of each anthocyanin measured in the samples were expressed as A × DF × CF/SWT where A = amount of anthocyanin expressed as external standard equivalent from the calibration curve (mg/mL); DF = dilution factor; CF = molecular white correction factor to convert individual anthocyanin calculated as the external standard equivalents to their respective forms; SWT = initial sample white. The concentration of anthocyanins was referred to the fruit fresh weight.

3.7. Phosphorus and Nitrogen Concentration in the Plant Organs

Inoculation of strawberry with AM fungi and PGPB resulted in increased concentration of the two main anthocyanins in the fruit produced by plants cultivated under conditions of reduced fertilization. In addition, three forms of pelargonidin were identified. Overall, our results suggest that the common fertilization practise provides nutrients in excess. Lower concentration of nutrients and inoculation with soil microorganisms can result in healthier fruits, with a higher concentration of antioxidant molecules, consistent with the improved nutritional quality of vegetables, as previously reported [23,24,67]). At the same time, data concerning the same plants used for this study showed that yield was not affected, even at reduced fertilization [56]. 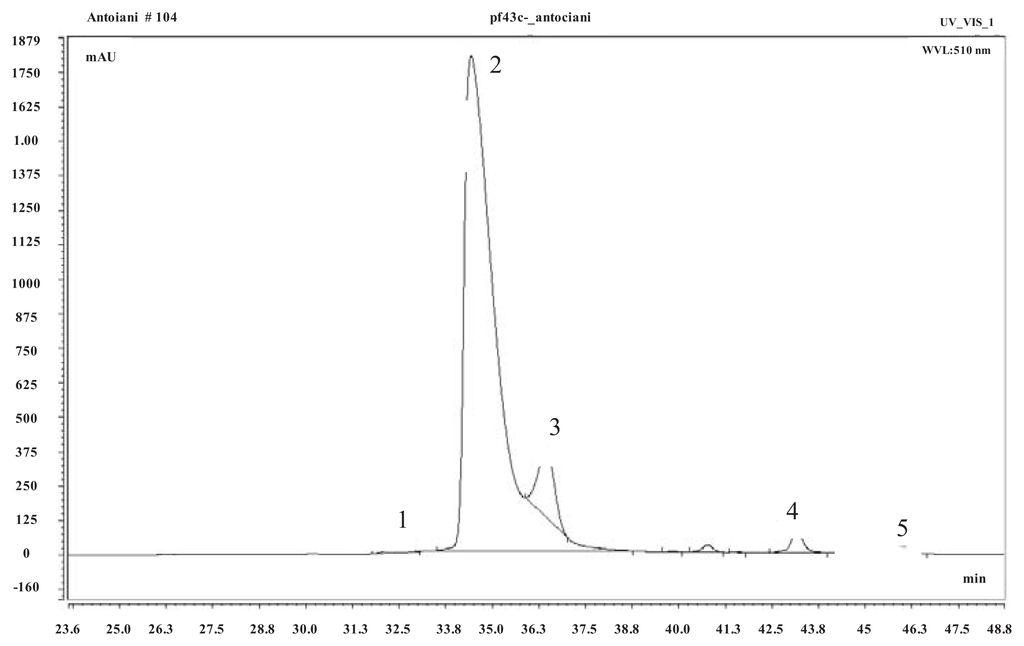 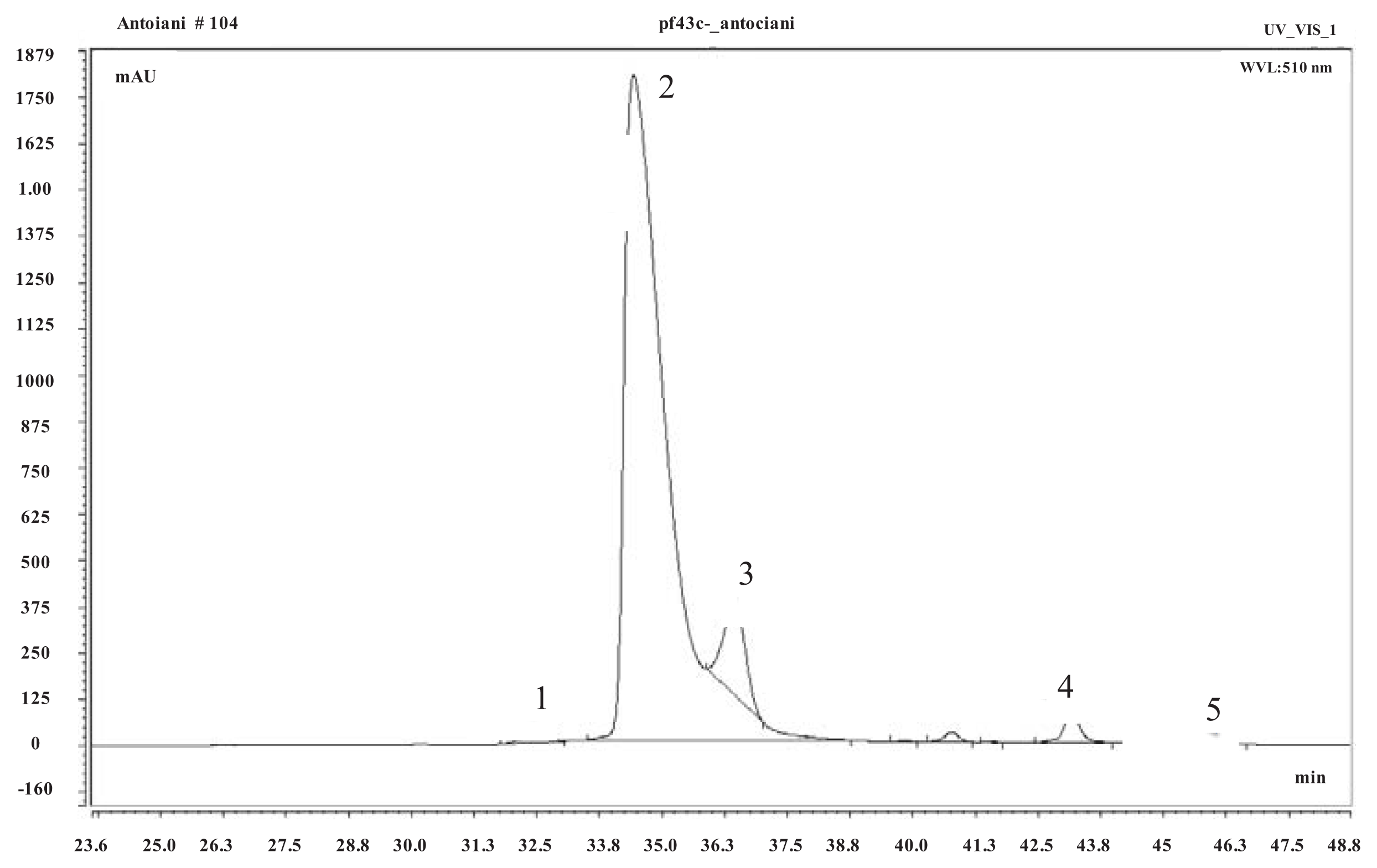 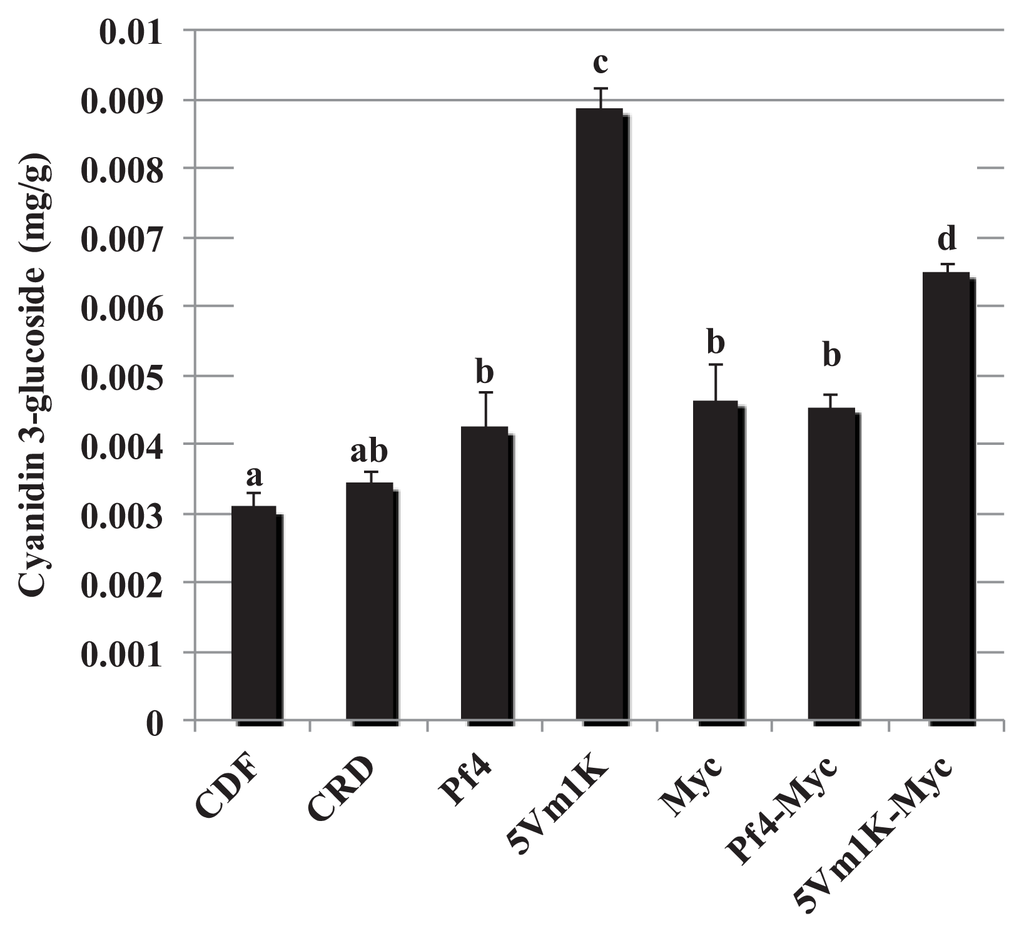 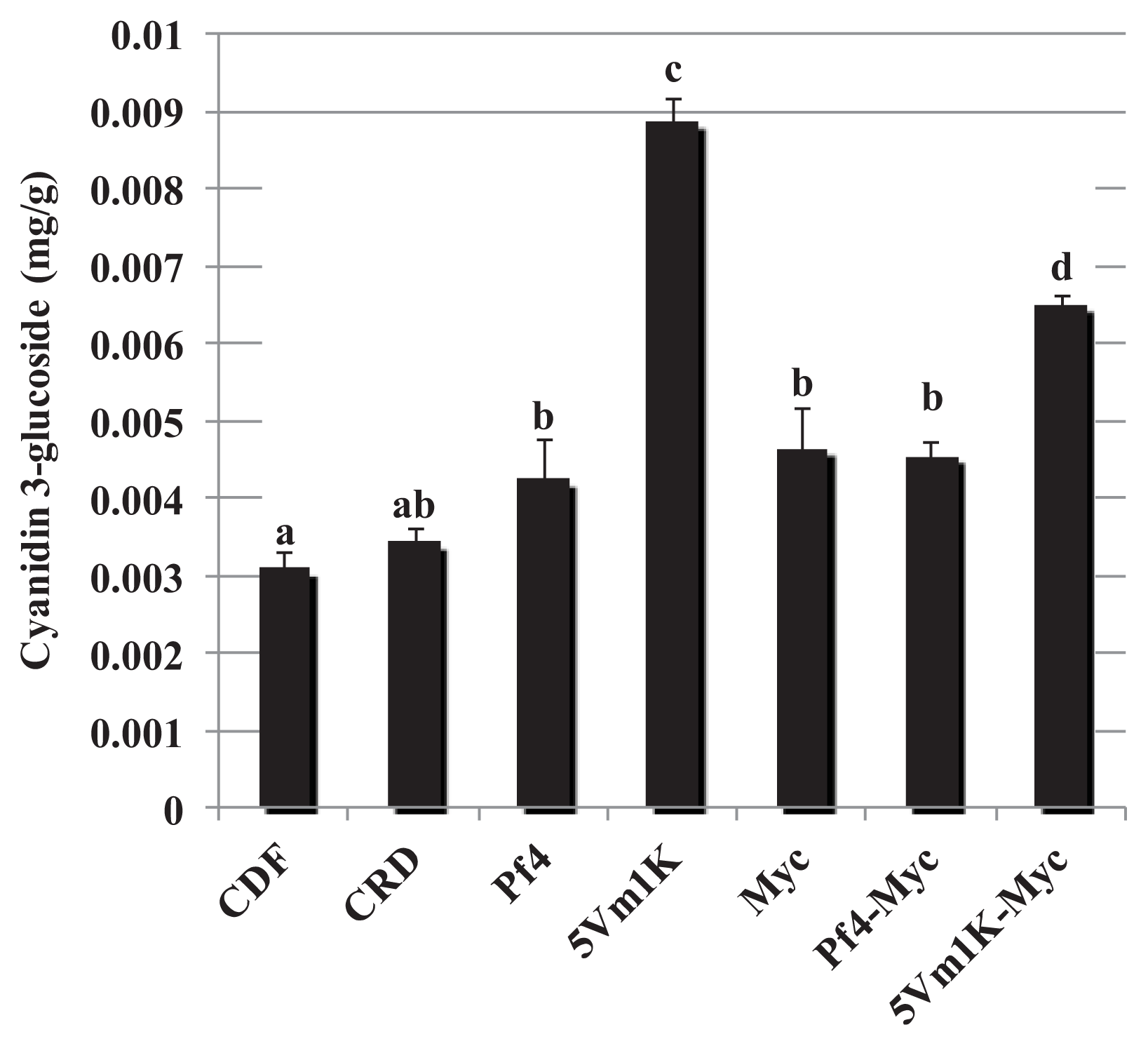 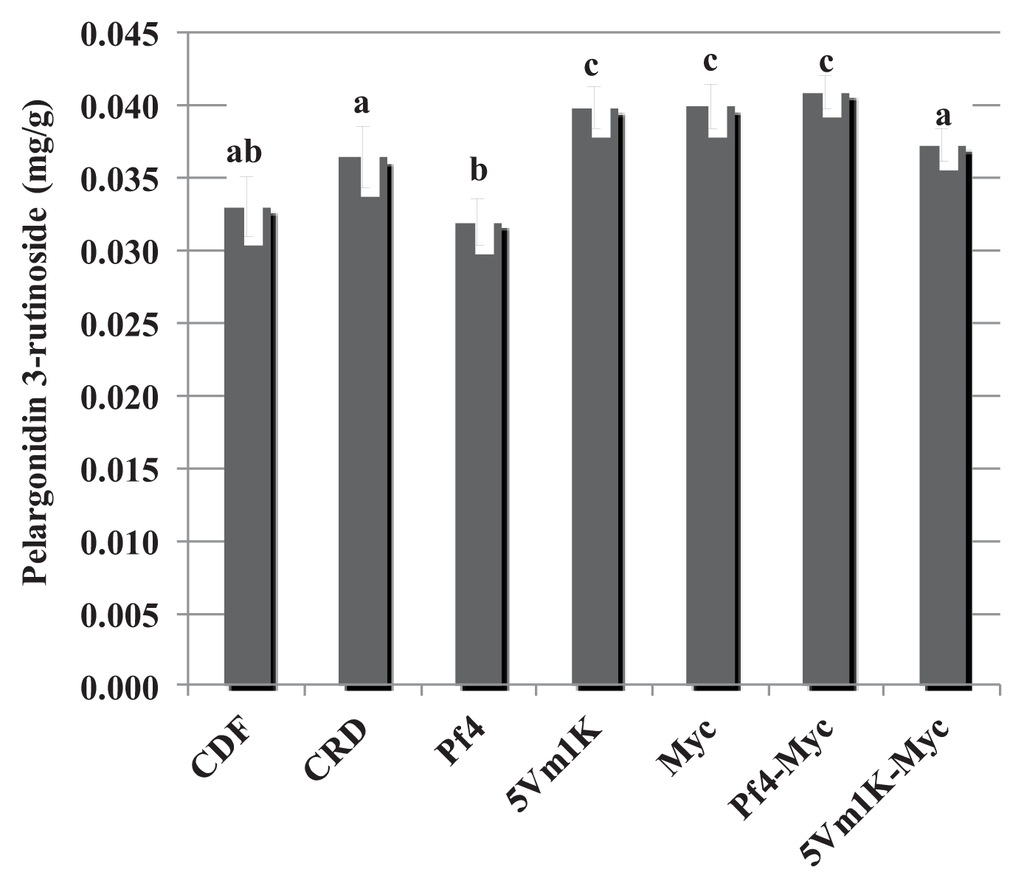 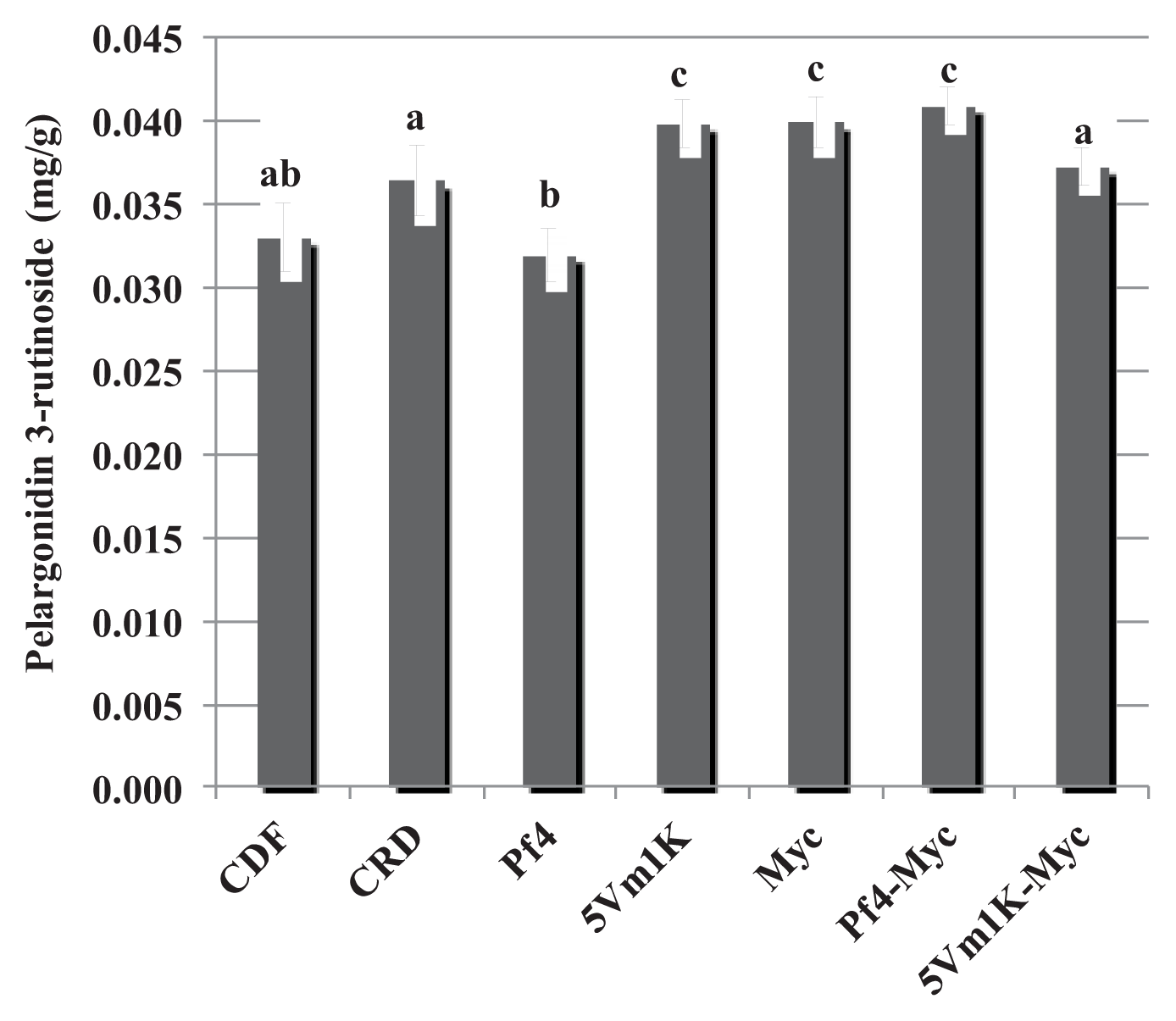 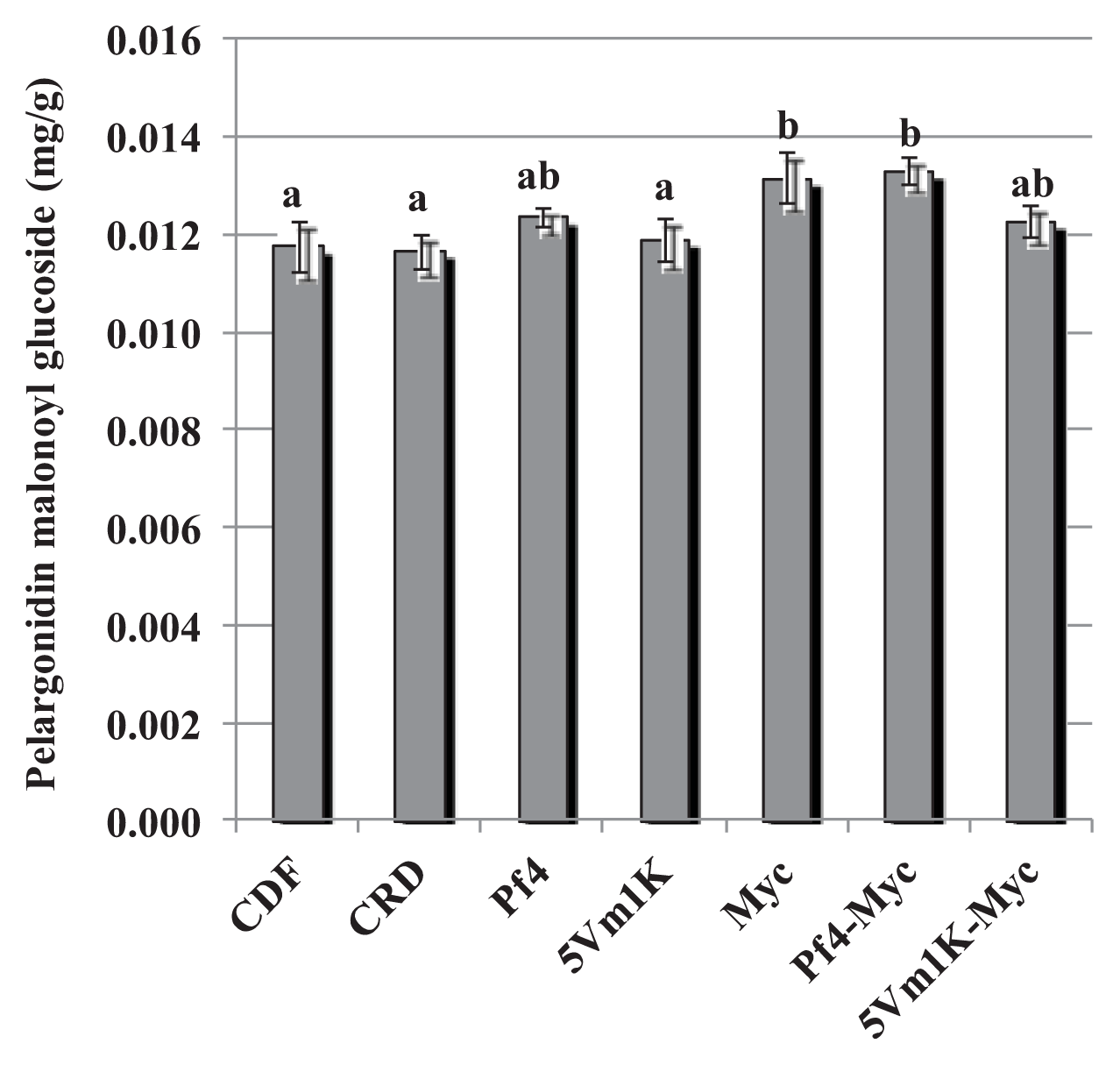 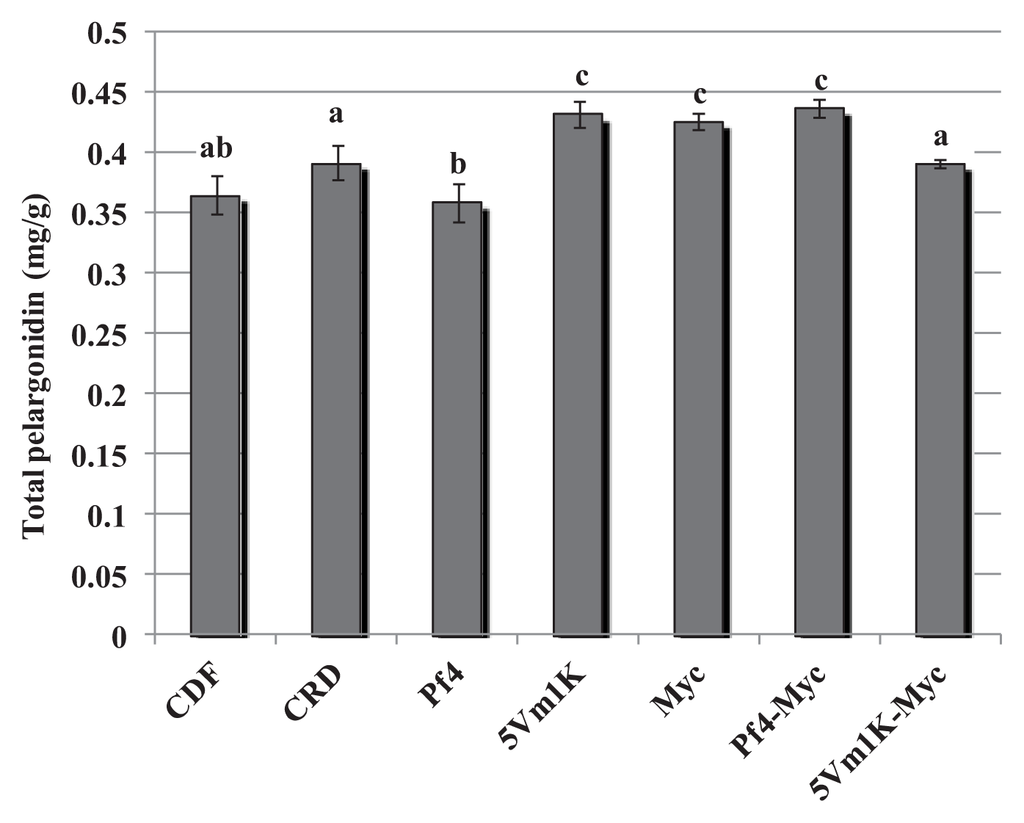 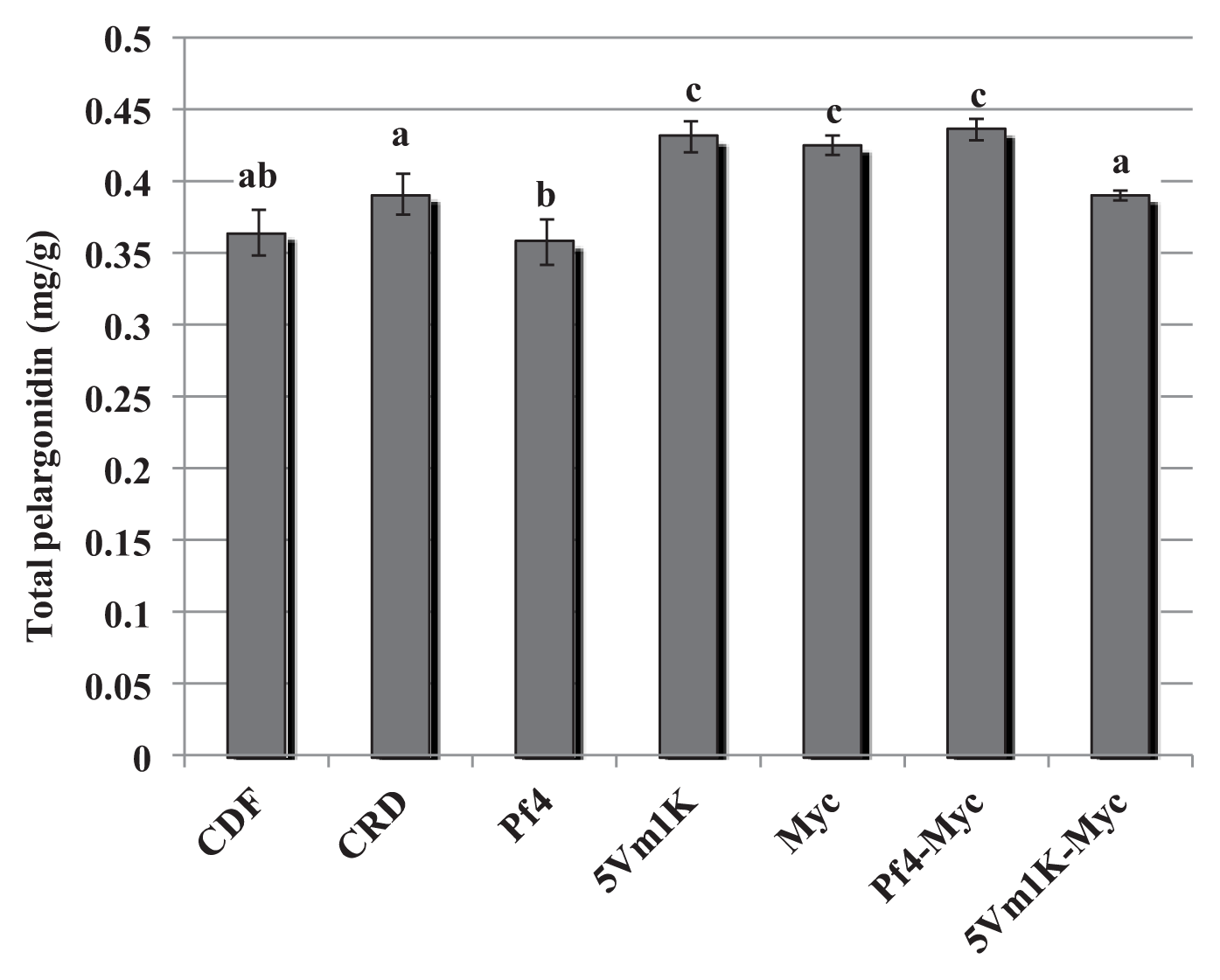