Bioactive Molecules in Soil Ecosystems: Masters of the Underground

In this paper, we investigated the intra-species bacterial quorum sensing at the single cell level using a double droplet trapping system. Escherichia coli transformed to express the quorum sensing receptor protein, LasR, were encapsulated in microdroplets that were positioned adjacent to microdroplets containing the autoinducer, N-(3-oxododecanoyl)-L-homoserine lactone (OdDHL). Functional activation of the LasR protein by diffusion of the OdDHL across the droplet interface was measured by monitoring the expression of green fluorescent protein (GFP) from a LasR-dependent promoter. A threshold concentration of OdDHL was found to induce production of quorum-sensing associated GFP by E. coli. Additionally, we demonstrated that LasR-dependent activation of GFP expression was also initiated when the adjacent droplets contained single E. coli transformed with the OdDHL synthase gene, LasI, representing a simple quorum sensing circuit between two droplets.
Keywords: droplet-based microfluidics; bacterial quorum sensing; single cell droplet-based microfluidics; bacterial quorum sensing; single cell

Quorum sensing is a form of cell-to-cell chemical communication in which bacteria produce, release, and respond to extracellular signaling molecules [1]. When the extracellular concentration of a signaling molecule reaches to a threshold, the response of a cell leads to changes in gene expression. Quorum sensing is regarded as a cell density dependent phenomenon where a group of bacteria can detect cell population and coordinate collective behavior such as virulence [2] and biofilm formation [3]. Quorum sensing was initially studied on clonal populations under laboratory conditions; however, the natural environments where bacterial populations live are complicated and bio-diverse [4]. Bacterial quorum sensing is influenced by other factors such as mass transport, confinement and degradation [5,6]. Furthermore, quorum sensing occurs even between small numbers of cells, which is important for survival and growth of cells in early biofilm formation, or early infection [7].
Advances in experimental methods have facilitated the study of individual parameters in regulating bacterial quorum sensing at single cell level, revealing important factors that may be masked in large populations. Carnes et al. and Boedicker et al. respectively showed that quorum sensing initiation by single Staphylococcus aureus or Pseudomonas aeruginosa bacteria is possible if they are confined in a tiny space [7,8]. The constructed microstructure provides a confinement that restricts the diffusion of signaling molecules and results in bacteria responding as if present at a high cell-density. These experiments employed quorum sensing bacteria to set up a closed self-inductive quorum sensing circuit. However, to our best knowledge the communication between individual confined bacteria has not been reported.
In this paper, a droplet-based microfluidic system is used to confine single bacterium for studying the influence of diffusion and confinement on quorum sensing. Microdroplets separated by inert oil and surfactant monolayers can be used as micro-reactors or micro-wells for the separation and encapsulation of single cells [9–11], enabling continuous monitoring of biological events at the single cell level [12–14]. It provides a high-throughput method to study cells quantitatively. Recently, we developed a microfluidic method for efficiently trapping two different droplets together and studied the diffusion of hydrogen peroxide across the droplet interface [15]. Here we develop this technique such that two cells encapsulated separately in two adjacent droplets can “talk” to each other by means of diffusion of signaling molecules across droplets. Initially one droplet contained the signaling molecule N-(3-oxododecanoyl)- l-homoserine lactone (OdDHL), and the other an OdDHL sensing E. coli. Subsequently a droplet containing OdDHL secreting E. coli was trapped adjacent to one containing OdDHL sensing E. coli, and the communication between two bacteria observed by monitoring the production of GFP in E. coli.

The device was designed using AutoCad (AutoDesk). Photolithographic masks were prepared on transparent plastics (Circuit Graphics, Essex, UK), and standard soft lithographic techniques were used to fabricate devices [16]. Briefly, SU8-2025 photoresist (MicroChem, Warwickshire, UK) was spin-coated to a final film thickness of 50 μm, as measured by profilometry on the finished master (DekTak 150, Coventry, UK). After spinning, the wafer was pre-baked (3 min at 65 °C, then 6 min at 95 °C and finally 3 min at 65 °C), and then exposed to UV light through a dark-field mask on a mask aligner (MJB4, Suss Microtech, Coventry, UK). After post-baking for 1 min at 65 °C and 3 min at 95 °C, the master was developed for 6 min and then hard-baked for 1 min at 170 °C. The master was used to prepare PDMS devices. PDMS base and curing agent (10:1, Sylgard 184) was poured over the master, degassed for 30 min and then baked overnight at 75 °C. The devices were cut and peeled off the master. Access holes for the inlet tubes were punched using a biopsy punch. The PDMS was then exposed to an air plasma for 8 s (Diener Femto plasma asher, Warrington, UK) sealed to a glass microscope slide, and baked overnight at 75 °C. For fluorophilic surfaces, the channels of the device were treated with Aquapel reagent and washed with FC-40. To avoid evaporation of the aqueous phase the PDMS device was sealed in a chamber filled with water for 3 days before experiments.

The flow of liquid through the device was driven with Harvard Apparatus 2000 syringe infusion pumps using plastic syringes (B. Braun, Sheffield, UK) connected to polyethylene tubing (Beckman and Dickinson, Oxford, UK). A solution of 1% RainDance EA surfactant (w/w %) in FC-40 was used as the oil phase in a fluorophilic PDMS device. A flow-focusing configuration was used to generate 50 μm diameter droplets. The size, frequency and speed of the droplets within the device were regulated by controlling the flow rate of the aqueous solutions and oil flow. A typical setup used the combination of 80 μL/h oil phase and 20 μL/h aqueous phase.

The trapped droplets were observed at 1000 frames per second by movement of the device in a pre-determined pattern using a computer-controlled motorized stage (H117 ProScan II, Prior Scientific, Rockland, MA, USA). The fluorescence images were taken using an EM-CCD camera (Xion+, Andor Technologies, Belfast, UK) connected to an inverted microscope (IX71, Olympus, Southend-on-Sea, UK) operating in epifluorescence mode, with a mercury lamp (U-LH100HG, Olympus) for wide-field illumination and filters (Olympus) to separate the fluorescence excitation and emission light. Photobleaching was minimized by illuminating the droplets only during measurements by using a computer-controlled shutter. The image acquisitions and image analysis was performed using image J and software written in Labview.

Construction of pSB1014 (mCherry expression plasmid): The chloramphenicol resistance cassette from pACYC184 [17] was PCR amplified using primers SP102 (AAAGCCCTTCCGGCTAAATAAATAAATCGGCACGTAAGAGGTTCC) and SP103 (GATGCCGGAAGGGCCGAATTTCTGCCATTCATCC) and cloned into the BglI site within the ApR cassette of pBAD30 [18], thereby disrupting it and generating plasmid pBAD30-cat. The red fluorescent protein, mCherry, was PCR-amplified from plasmid pmCherry-N1 (Clontech) using primers SBP57 (TTTTGGTCTCTTACTTGTACAGCTCGTCCATGC) and SBP61 (TTTTGAATTCTAAATAAAATAAAGGAGGAGTCCCTTATGGTGAGCAAGGGCGAGGAGGA). The PCR product was digested with EcoRI and cloned into the SmaI EcoRI sites of pBAD30-cat to generate plasmid pSB1014 which was able to express mCherry protein in response to l-arabinose.
Construction of pBAD30-lasI: the lasI gene was PCR amplified from P. aeruginosa genomic DNA using primers SP22 (GATCCCGGGAGGAGGACAGGGATGATCGTACAAATTGGTCGG) and SP29 (GATAAGCTTTCA TGAAACCGCCAGTCGCT) and cloned into the XmaI HindIII sites of pBAD30-cat. This construct is able to express LasI in response to addition of the inducer, l-arabinose.

We have shown, using a double droplet trapping system, that the quorum sensing of single bacterium was observed when it was either exposed to a neighboring pool of signaling molecule, OdDHL, or a droplet containing another single bacterium. Due to the limitation of diffusion, a concentration of 1 μM was found to be the threshold for triggering quorum sensing. The results demonstrated the important role of diffusion, in triggering bacterial quorum sensing and the confinement offered by droplets, in facilitating the build up of concentration beyond the threshold. For droplet-based cell analysis, our approach provides the possibility of studying the communication and interaction between bacteria confined in a small volume at single cell level. By changing contents encapsulated in droplets, this technique might be useful for studying other signaling molecules induced quorum sensing systems or even inter species interaction in the future.

This work was supported by the RCUK Basic Technology Programme and an EPSRC platform grant. Y Bai was funded by a CSC-Cambridge scholarship. We thank the BBSRC, MRC and Frances and Augustus Newman Foundation for financial support. We thank Martin Fischlechner for generously donating rhodamine B isothiocyanate-dextran labeled microbeads. 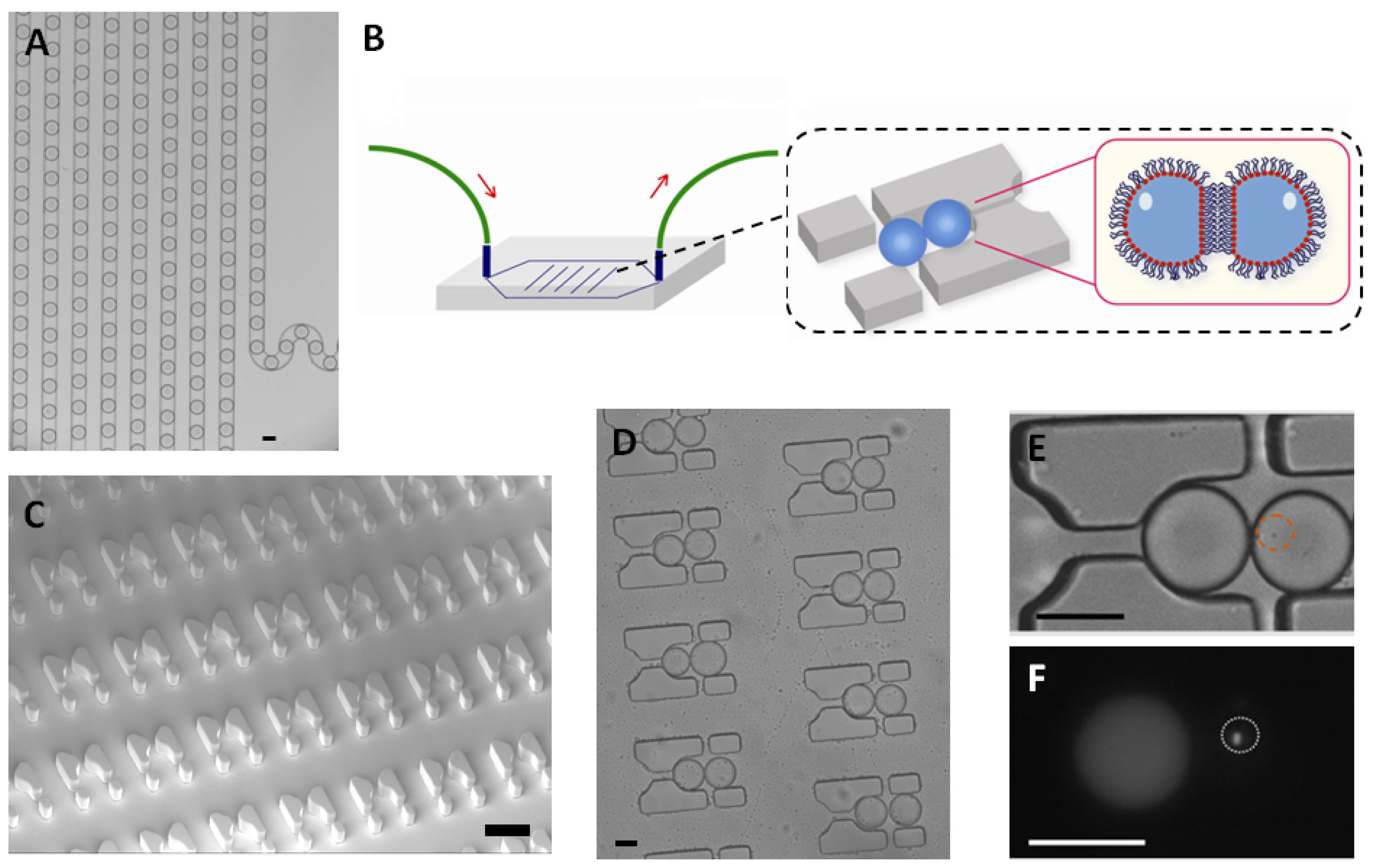 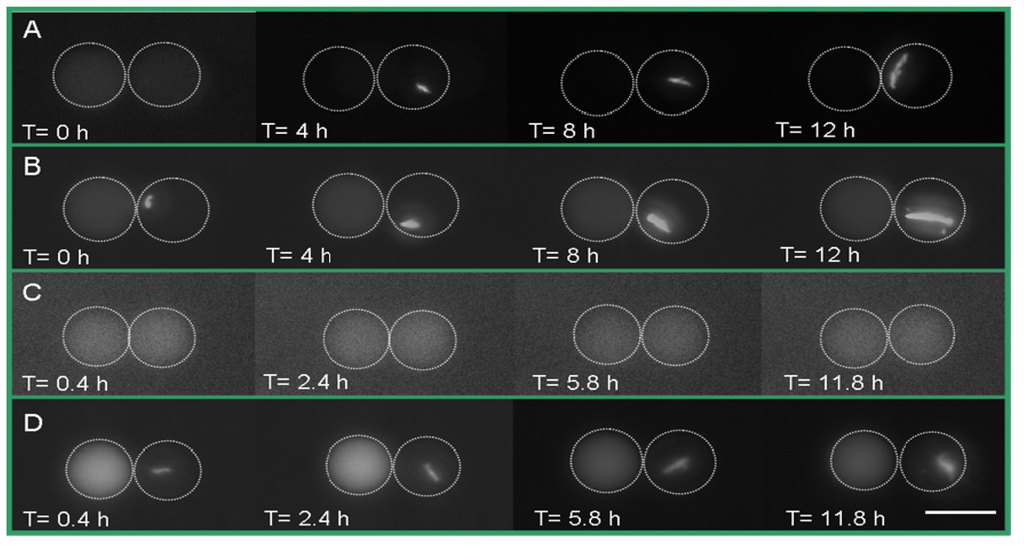 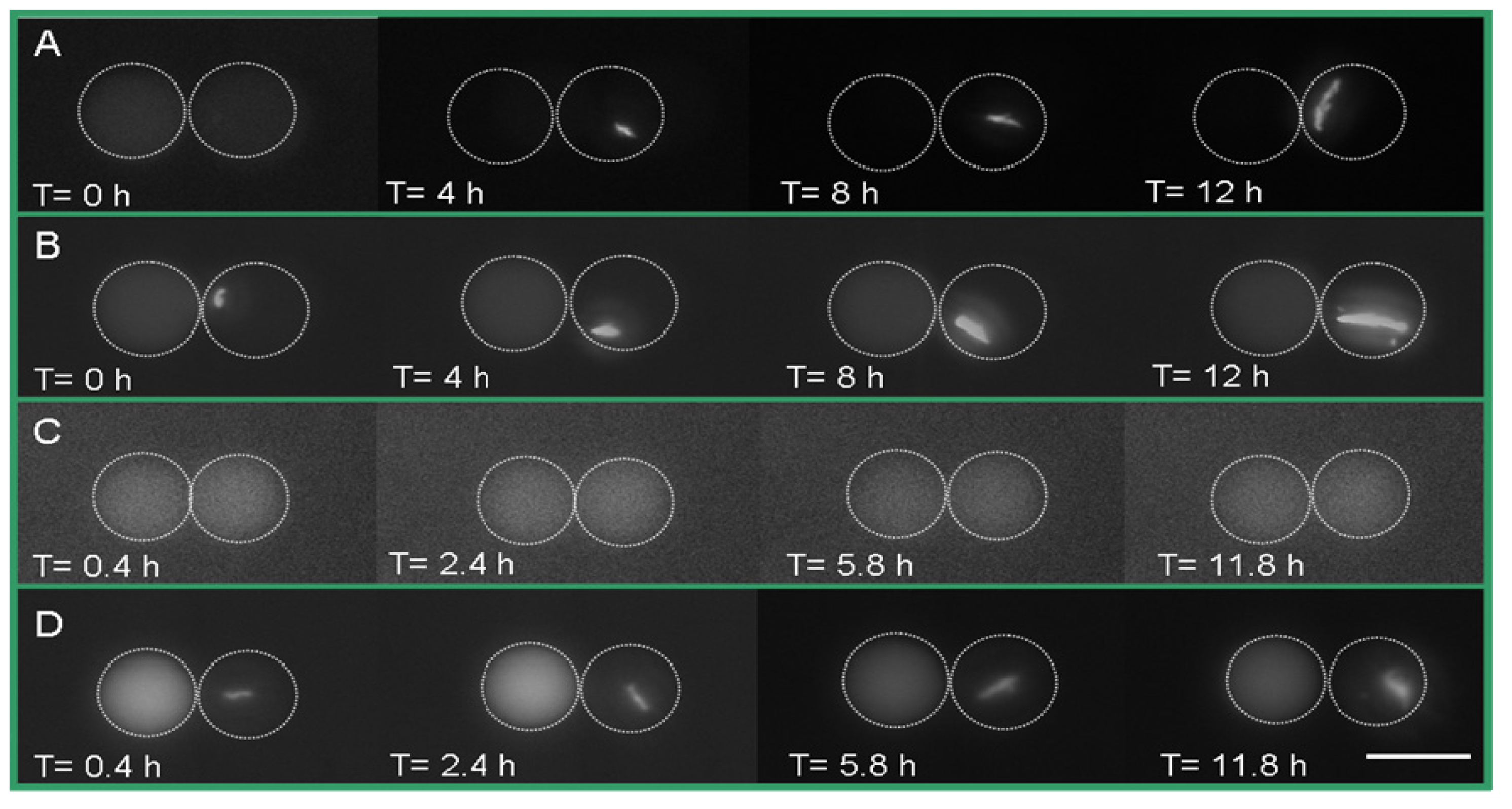 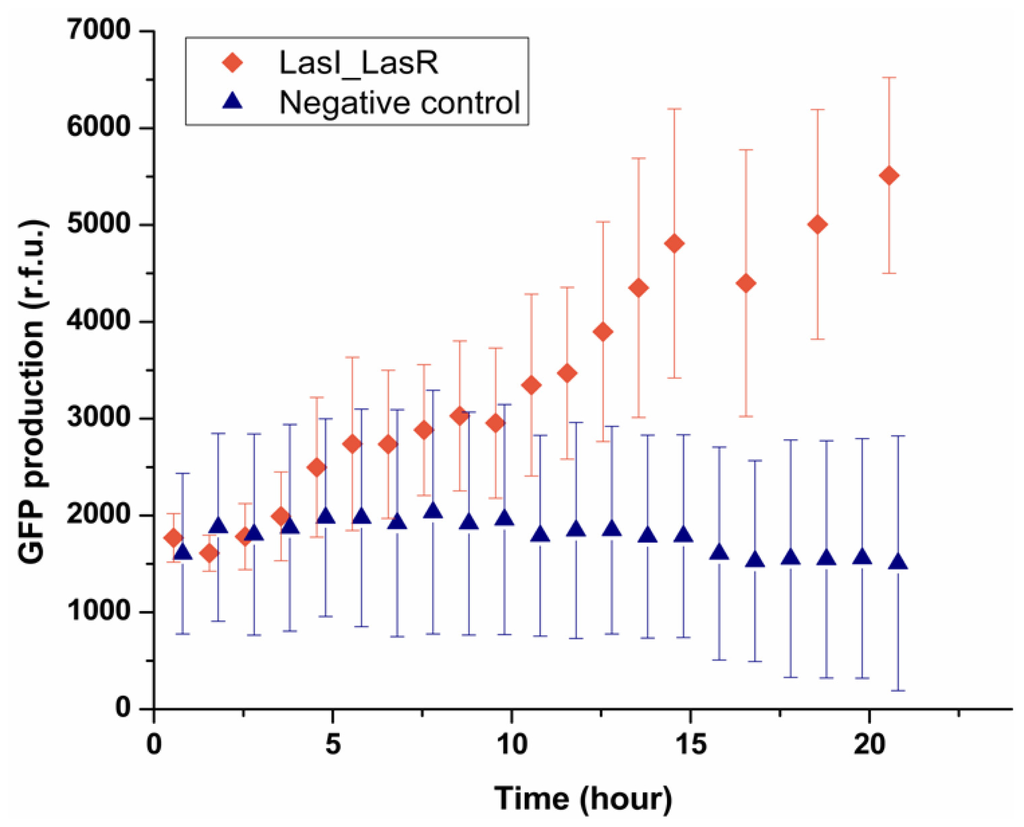