The inhibitory effect of P. vulgaris var. lilacina on RAW 264.7 cell viability was determined by intracellular ATP content (Figure 1). Cells were treated with fractions of P. vulgaris var. lilacina at various concentrations (0, 10, 50, and 100 μg/mL) for 1 h and then co-incubated with lipopolysaccharides (LPS; 1 μg/mL) for an additional 24 h.
We estimated the influence on cell survival according to the following criteria: Cell viability values greater than 90% were considered unaffected by tested compounds, 80%–90% was modestly affected, and values less than 80% were considered affected by the cytotoxic effects of the compounds.
Our results showed that the various fractions of P. vulgaris var. lilacina had no cytotoxic effects on RAW 264.7 cells at concentrations of 10 μg/mL. For the hexane fractions (50 μg/mL), the viability of RAW 264.7 cells after exposure was 85%, which, according to our criteria, was a modest effect and was not considered cytotoxic in other reported studies [17–19]. In contrast, the group treated with chloroform (CHCl3) fractions resulted in a cell viability value of 73%. Therefore, except for the chloroform fractions, all fractions of P. vulgaris var. lilacina from 10 to 50 μg/mL were selected for subsequent experiments.

2.2. Effect of P. vulgaris var. lilacina on LPS-Induced NO and PGE2 Production

We next investigated whether P. vulgaris var. lilacina might have anti-inflammatory properties in LPS-stimulated RAW 264.7 cells. Various concentrations (0, 10, and 50 μg/mL) of P. vulgaris var. lilacina fractions were used on RAW 264.7 cells to test whether P. vulgaris var. lilacina could reverse LPS-induced accumulation of NO and PGE2. The results revealed that LPS (1 μg/mL) treatment for 24 h markedly increased NO and PGE2 production as compared with control group; however, P. vulgaris var. lilacina fractions significantly inhibited the production of these factors in a dose-dependent manner (Figure 2). In particular, NO and PGE2 secretion decreased by 40% and 60%, respectively, in cells exposed to the hexane fraction of P. vulgaris var. lilacina. For the chloroform fraction, NO secretion was strongly inhibited, suggesting that the chloroform fraction may influence cell death. Huang et al. [16] demonstrated that the ethanol extract of P. vulgaris inhibited LPS-induced PGE2 and NO production by 10%–35%. Our results are consistent with their reports. The remarkable aspect of our study is that we observed a stronger inhibition than their results. These results could be affected by various extracted compounds come from difference of composition of the solvent which were likely due to our using 70% ethanol for extraction instead of 95% ethanol as was used by the other group.

NO is acknowledged as a mediator and regulator of the inflammatory response and is made in large amounts by iNOS in activated inflammatory cells [20]. The enzymatic activity of COX-2 also can be influenced directly by NO and iNOS [21]. To elucidate the mechanisms of inhibition for the hexane fraction against NO and PGE2 production in LPS-stimulated RAW 264.7 cells, we assessed whether the inhibitory effects of P. vulgaris var. lilacina on these inflammatory mediators were related to iNOS and COX-2 protein and mRNA levels using western blot and real-time reverse transcription polymerase chain reaction (RT-PCR) analyses, respectively. The level of iNOS and COX-2 mRNA and protein expression was significantly elevated in macrophages treated with LPS. Treatment with P. vulgaris var. lilacina fractions attenuated LPS-induced iNOS and COX-2 expression (Figure 3). These results suggest that the inhibitory effect of the fractions on LPS-induced NO and PGE2 production was mediated by the inhibition of iNOS and COX-2 expression.

We isolated various compounds from the hexane fraction of P. vulgaris var. lilacina: the identified compounds are shown in Figure 6. The spectrum profile from the gas chromatography-mass spectrometry (GC-MS) analysis confirmed the presence of 12 major components: hexadecanoic acid, ethyl palmitate, phytol, ethyl linileate, (Z,Z,Z)-9,12,15-octadecatrien-1-ol, linoleic acid ethyl ester, (Z,Z,Z)-ethyl ester-9,12,15-octadecatrienoic acid, 3-oxo-8,beta,H-eudesma-1,4,7(11)-trien-8,12-olide, 3,7,11-trimethyl-2,6,10-dodecatrien-1-ol, nerol, linalyl formate, and 3-ethylenetricyclo[3.3.1.1(3,7)]decane.
Several lipophilic compounds, including polyacetylenic acids, have been previously identified in the hexane fraction of P. vulgaris var. lilacina [27], and our research confirmed that this fraction indeed contained lipophilic compounds such as hexadecanoic acid, ethyl palmitate, and (Z,Z,Z)-ethyl ester-9,12,15-octadecatrienoic acid. It is well known that polyacetylenic acids have a therapeutic potential as antifungals and anti-oomycetes [27] while hexadecanoic acid, as an anti-inflammatory agent, has shown significant inhibitory activity against phospholipase A2 [28]. These reports are consistent with our results suggesting either that very potent unidentified anti-inflammatory compounds may be present in the hexane fraction of P. vulgaris var. lilacina or that hexadecanoic acid and other compounds may exert a synergistic effect on the inhibition of inflammatory mediator production in LPS-stimulated RAW 264.7 cells.

P. vulgaris var. lilacina was purchased from the Plant Extract Bank (Dae-jeon, Korea). The dried P. vulgaris var. lilacina was ground into fine powders in a blender and was extracted three times with 70% ethanol. Subsequently, 10 g of 70% ethanol extract powder were weighed and dissolved in 500 mL distilled water and extracted stepwise with 500 mL of the following solvents: hexane, chloroform, and butanol. Each fraction was filtered through number 6 filter paper (Advantec MFS, Inc., Tokyo, Japan). The filtrates were combined and evaporated under vacuum and then lyophilized with a Bondiro Lyophpride freeze dryer (Ilshine Lab Co. Ltd., Dongducheon, Korea) at −70 °C under reduced pressure (<20 Pa).

The RAW 264.7 macrophage cell line was purchased from the Korean Cell Line Bank (Seoul, Korea). RAW 264.7 cells were cultured in DMEM containing, 10% FBS and 1% penicillin/streptomycin at 37 °C in 5% CO2. To investigate cell viability of P. vulgaris var. lilacina, cells (1 × 104 cells/well) were added to duplicate 48-well plates and incubated for 24 h, then treated with various concentrations (10, 50, and 100 μg/mL) of fractions of P. vulgaris var. lilacina for 24 h. Cell viability was measured with CellTiter Glo (Promega, Madison, WI, USA). The luminescent signal produced, which was proportional to the amount of ATP present in viable cells, was read on a Sirus luminometer (BertholdDetection System, Pforzheim, Germany). Cell viability is presented as the percentage of live cells in each well.

Nitrite was measured as an indicator of NO production after 48 h of treatment and LPS induction. The culture supernatant (100 μL) was placed in a 96-well plate, and an equal amount of Griess reagent (2% sulphanilamide and 0.2% N-1-(naphthyl) ethylenediamine dihydrochloride in 5% H3PO4) was added. The plate was then incubated for 10 min and the absorbance measured at 540 nm. The amount of NO was calculated using a sodium nitrite standard curve.

After 12 h of treatment and LPS stimulation, the culture supernatant was collected. PGE2 was measured using a PGE2 ELISA kit following the manufacturer’s instructions (Abcam, Cambridge, MA, USA). Briefly, the diluted cell supernatant (100 μL) was placed in a 96-well goat anti-mouse IgG-coated plate and incubated for 2 h. After incubation, the plate was washed using the provided washing buffer, and the color was developed by adding PNPP (200 μL) substrate after 45 min. The amount of PGE2 was calculated by using a PGE2 standard curve.

Cells were lysed in RIPA buffer (150 mM Sodium Chloride, 1% Triton X-100, 1% sodium deoxycholate, 0.1% SDS, 50 mM Tris-HCl, pH 7.5, and 2 mM EDTA) on ice for 30 min. After centrifugation at 4 °C for 20 min (12,000 × g), the supernatant was collected. Protein concentrations were determined by BCA assay (GenDEPOT, Barker, TX, USA). Equal amounts of cell extracts were separated by 12.5% SDS-PAGE and transferred to polyvinylidene difluoride (PVDF) membranes (Bio-Rad, Hercules, CA, USA). The membranes were blotted with antibody and detection was performed with an ECL system (Pierce, Rockford, IL, USA) according to the manufacturer’s instructions.

The TNFα levels in the culture medium were determined by a Duo Set mouse TNFα ELISA kit according to the manufacturer’s protocols (R & D Systems, Minneapolis, MN, USA). The TNFα produced by LPS-treated cells was taken as 100%.

RAW 264.7 cells were transiently transfected with a pNF-κB-luciferase vector (Promega) using Lipofectamine 2000 (Invitrogen, Carlsbad, CA, USA) following the manufacturer’s protocol. Briefly, 5 × 104 cells were placed in a 24-well plate and allowed to grow to 80%–90% confluency for 24 h. The cells were then treated with DNA-Transfast reagent mixture (50 μL) and incubated for 16 h. The amount of DNA added was 0.25 μg/well. After 16 h of incubation, each well was overlaid with 1 mL complete growth medium and the transfection was carried out for 48 h.

GC-MS analysis was carried out using an Agilent 6890 gas chromatograph equipped with a DB-5ms capillary column (60 m × 0.25 mm; coating thickness 1.4 μm) and an Agilent 5975 MSD detector (Loveland, CO, USA). Analytical conditions were as follows: injector and transfer line temperatures of 250 °C; oven temperature was programmed from 50 °C to 150 °C at 10 °C/min, from 150 °C to 200 °C at 7 °C/min, and from 200 °C to 250 °C at 5 °C/min; carrier gas helium at 1 mL/min; and split ratio 1:10. Identification of the constituents was based on comparison of the retention times with those of authentic samples. MS spectra of separated compounds were compared with one from Wiley 7 Nist 05 mass spectral database. 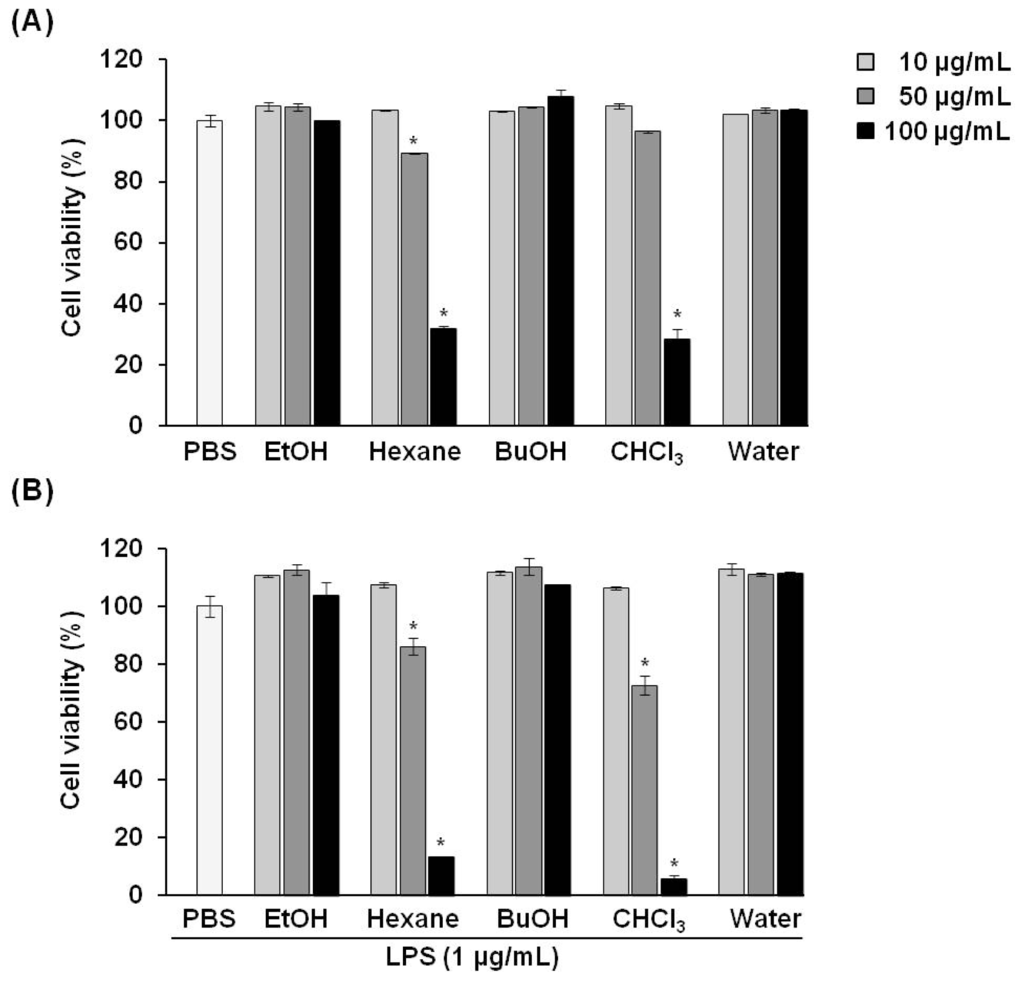 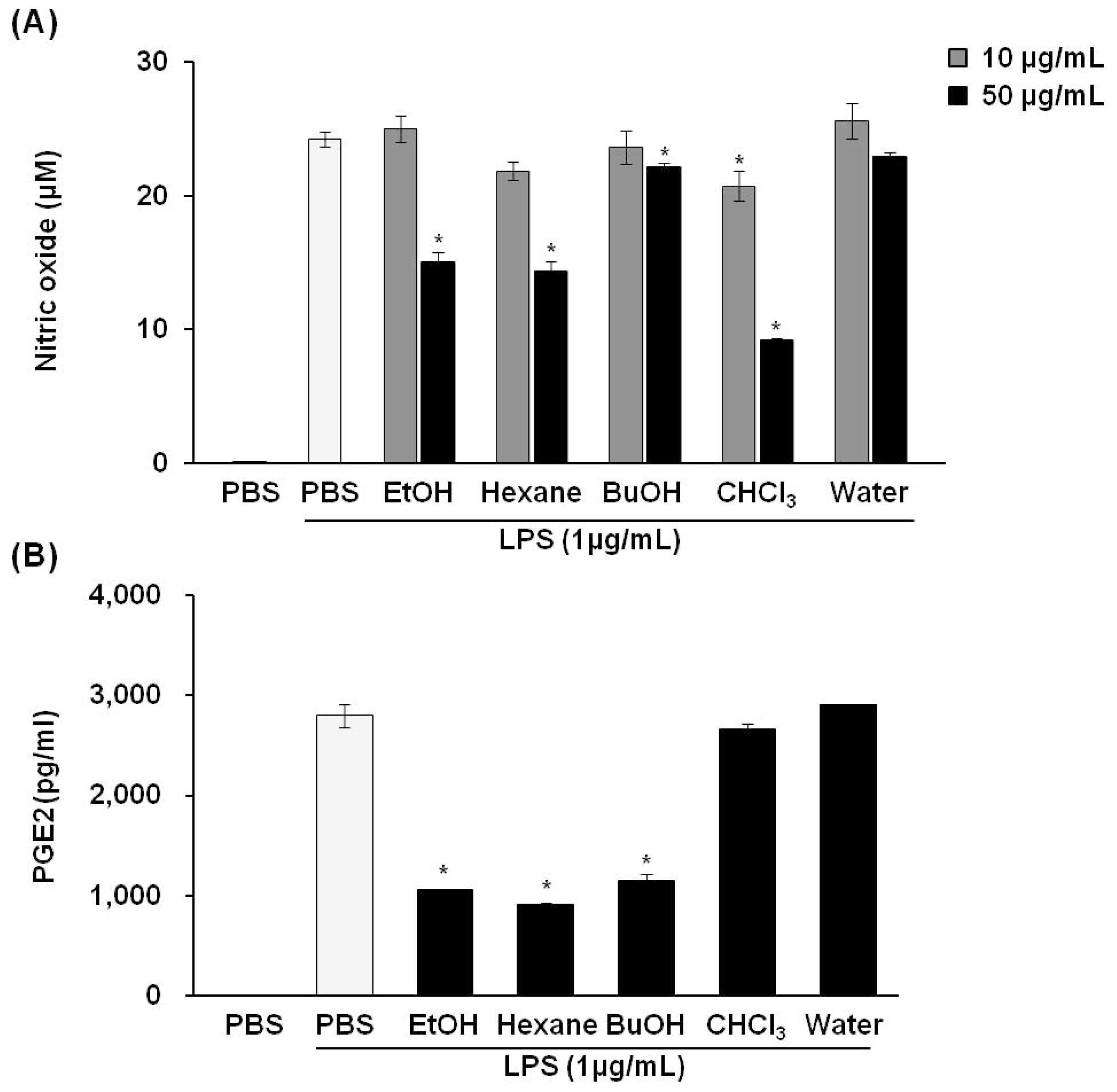 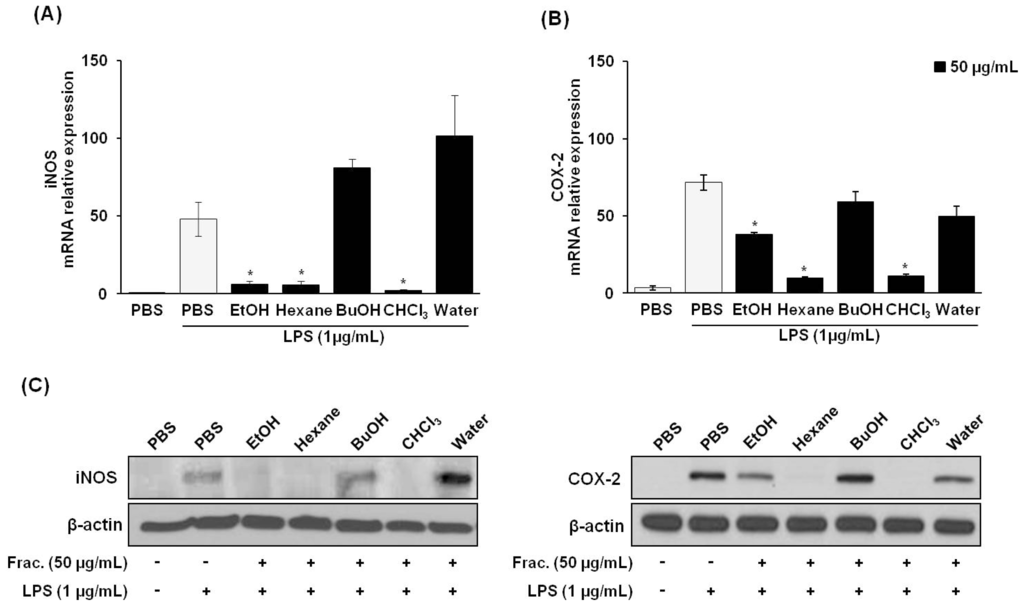 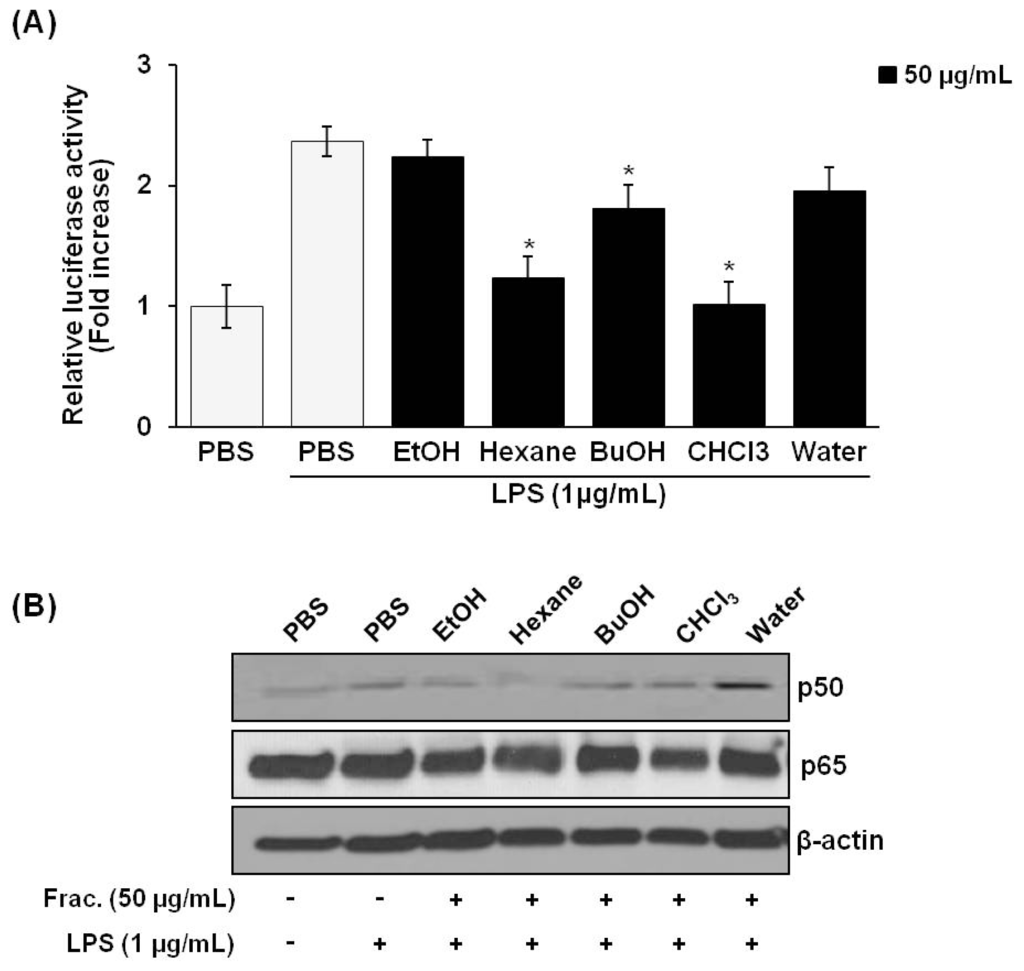 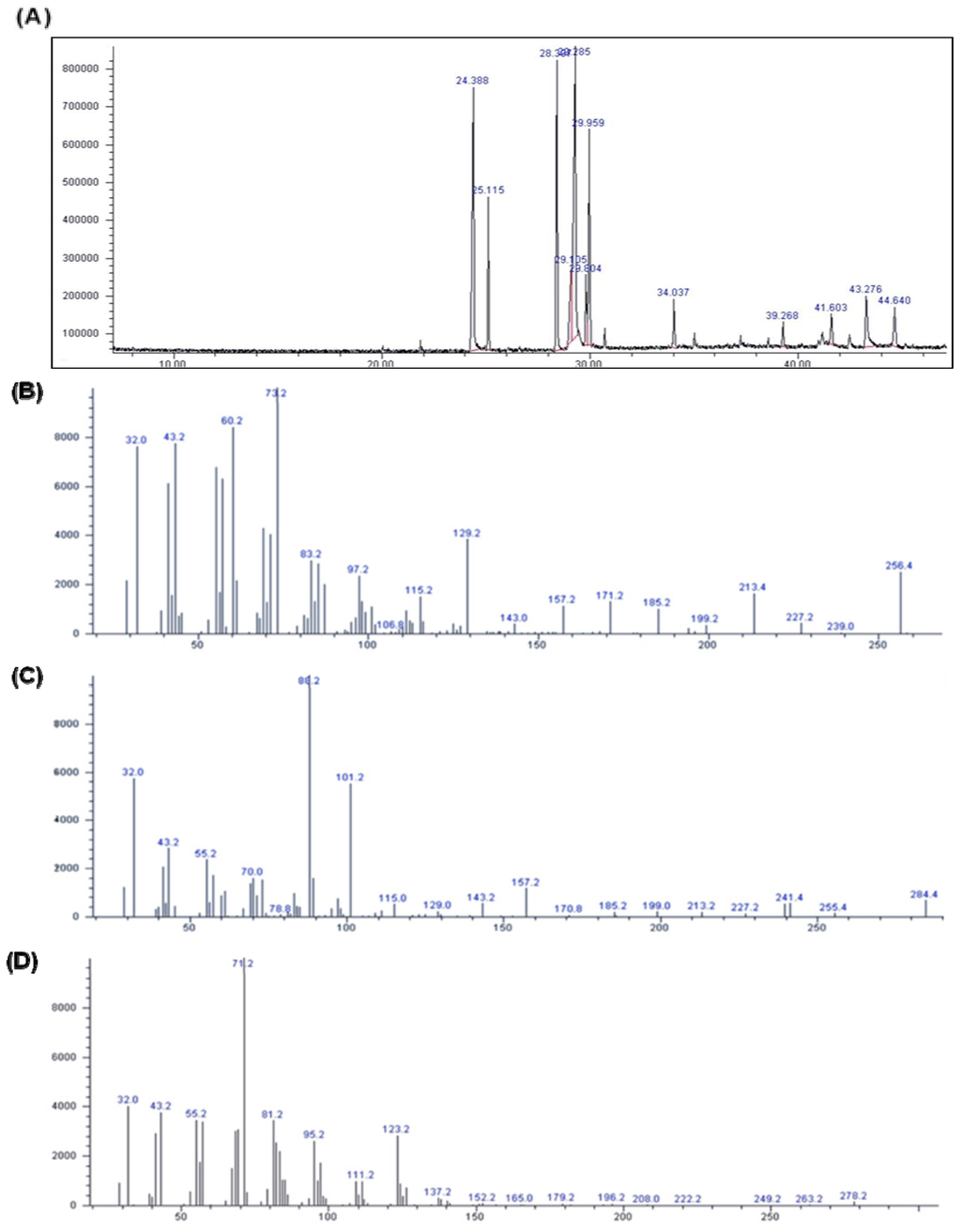 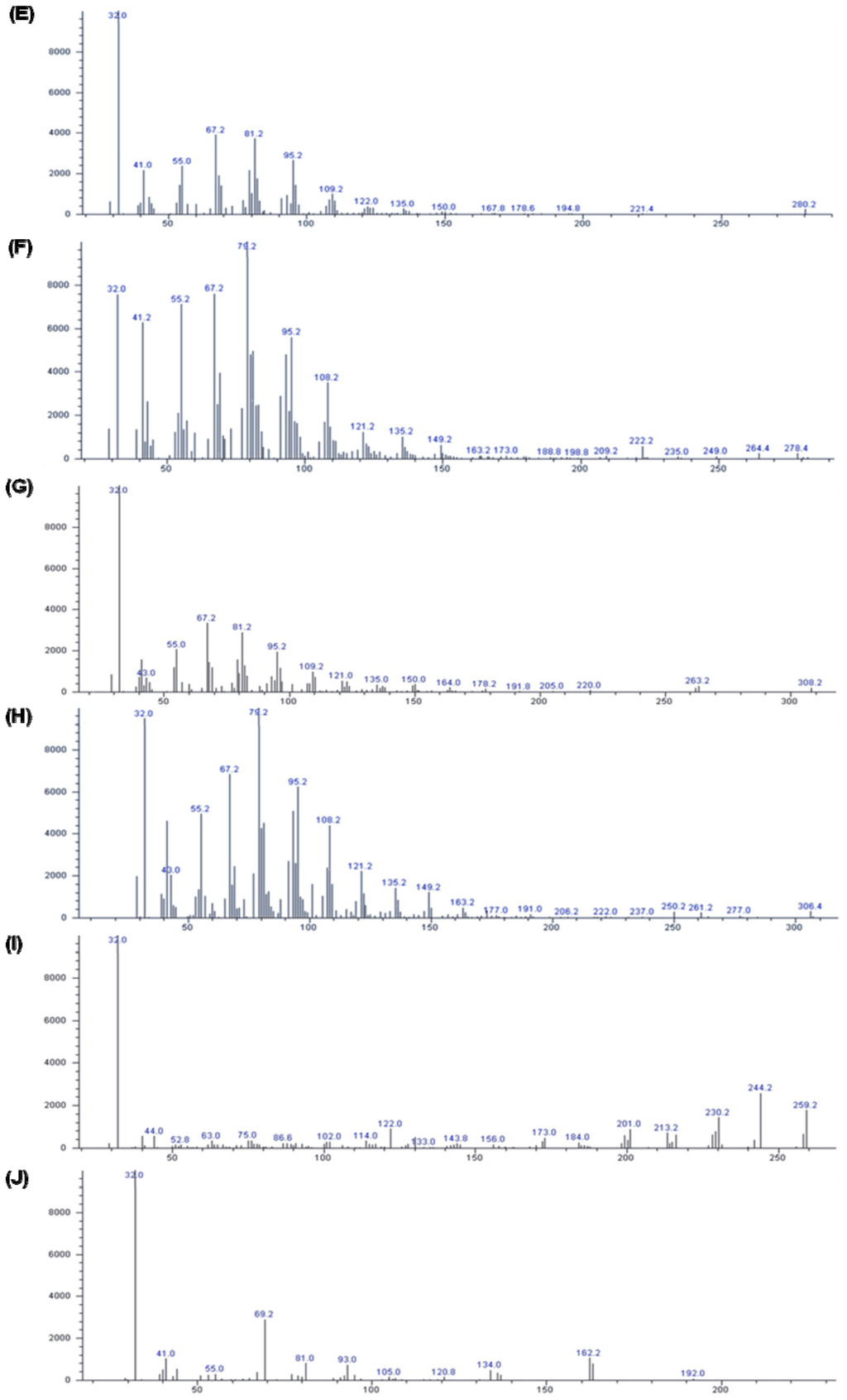