:
Advanced glycation end products (AGEs) and inflammation contribute to the development of diabetic complications. Astragalus membranaceus has properties of immunological regulation in many diseases. The aim of this study was to determine the function of A. membranaceus extract (AME) on the AGE-induced inflammatory response in Ana-1 macrophages. The viability of cells treated with AME or AGEs was evaluated with the MTT [3-(4,5-dimethyl-2-thiazolyl)-2,5-diphenyl-2H-tetrazolium bromide] method. The secretion and mRNA levels of IL-1β and TNF-α were measured by ELISA and RT-PCR, respectively. The activity of NF-κB was assayed by EMSA. The phosphorylation of p38 MAPK was assessed by western blotting. The results showed that AME was not toxic to macrophages. The treatment of macrophages with AME effectively inhibited AGE-induced IL-1β and TNF-α secretion and mRNA expression in macrophages. These effects may be mediated by p38 MAPK and the NF-κB pathway. The results suggest that AME can inhibit AGE-induced inflammatory cytokine production to down-regulate macrophage-mediated inflammation via p38 MAPK and NF-κB signaling pathways and indicate that AME could be an immunoregulatory agent against AGE-induced inflammation in diabetes.
Keywords:
Astragalus membranaceus; advanced glycation end products; macrophage; inflammation; diabetes

A rapidly growing number of clinical and experimental data support the concept that diabetes is a chronic inflammatory disease [1,2]. Macrophages are the major immune cells infiltrating vascular tissue in diabetes. Evidence has shown that the monocyte chemo-attractant protein-1 (MCP-1)- and the C-chemokine receptor (CCR1)-dependent recruitment of macrophages contribute to the development of diabetic vascular complications, e.g., renal injury [3–6]. After long-term exposure to a hyperglycemic milieu, proteins in the blood and tissue eventually give rise to the irreversible formation of advanced glycation end products (AGEs). AGE accumulation and macrophages have been implicated in the development and progression of diabetic complications [7].
AGEs activate monocytes/macrophages to produce excess inflammatory cytokines, such as interleukin-1 beta (IL-1β) and tumor necrosis factor-alpha (TNF-α) [8,9]. IL-1β is an important component in the initiation and enhancement of inflammatory responses. TNF-α mediates inflammatory tissue injury [10–12]. TNF-α and IL-1β are associated with diabetic complications [13,14]. Therefore, substances that can inhibit the inappropriate production of TNF-α and IL-1β in AGE-stimulated macrophages could be considered as potential anti-inflammatory agents.
Immunosuppressants may prevent chronic inflammation, but they have been found to have a high infectious rate in diabetic patients. Recently, Astragalus membranaceus, a Chinese herb, has attracted attention as an immunomodulator that can reduce the production of TNF-α and IL-1β in lipopolysaccharide-stimulated macrophages [15].
Based on these previous reports, we investigated the effects of A. membranaceus extract (AME) on AGE-induced inflammation involving TNF-α and IL-1β via phospho-P38 mitogen-activated protein kinase (MAPK) and nuclear factor (NF)-κB pathways in macrophages.

2.1. Effects of AGEs and AME on Cell Viability

The treatment of Ana-1 macrophages with different concentrations of AME (5–40 μL/mL) for 24 h did not significantly affect cell viability. We found no toxicity of AME to macrophages (Figure 1B). Meanwhile, AGEs (25–200 mg/L) decreased macrophage viability in a concentration-dependent manner at 24 h (Figure 1A).
Based on these results and previous reports, we chose the maximum concentration of AME (40 μL/mL) and AGEs (100 mg/L) that did not significantly affect Ana-1 macrophage viability at 24 h for subsequent experiments to determine underlying mechanisms.

2.2. Effects of AME and AGEs on the mRNA Levels and Secretion of IL-1β and TNF-α in Macrophages

2.3. NF-κB and Phospho-p38 MAPK Mediate the Effects of AGEs and AME on Macrophages

The crude herb and AME were obtained from Chiatai Qingchunbao Pharmaceutical Co. Ltd. and formulated according to the standard of the Chinese pharmacopeia. In brief, the dried roots of AM (1 kg), also known as Radix Astragali or A. membranaceus (Fisch.) Bge var. mongholicus Hsiao, were extracted two times using 63% and 86% ethanol. Then, ethanol was removed. The prepared total AM was dissolved in deionized water at a ratio of 1 mL:2.5 g and filtered. The filtrate was boiled for 5 min, and deionized water was added to 1000 mL. The AM extract was filtered and pasteurized.

Macrophages (100 μL) were seeded at a density of 5 × 104 cells/mL and incubated with AME (5–40 μL/mL) or AGEs (25–200 mg/L) in 96-well plates. After 24 h of incubation, MTT solution was added to each well for 4 h. Finally, the blue salt in each well was dissolved, and the plates were read by a microplate reader with RPMI 1640 as a blank and cell culture medium as a control. We determined the concentration of AME (40 μL/mL) and AGEs (100 mg/L) for the subsequent experiments based on the cell viability results.

3.5. Assessment of TNF-α and IL-1β Secretion

Ana-1 macrophages were plated at 5 × 105 cells/well in 24-well plates overnight. Macrophages were cultured with AGEs for 24 h or pre-treated with AME for 1 h before culture with AGEs. The levels of TNF-α and IL-1β in culture supernatants were determined using commercially available enzyme-linked immunosorbent assay (ELISA) kits according to the manufacturer’s instructions.

In total, 1 × 106 Ana-1 macrophages were plated in a 6-well culture plate, and AGEs were added for 24 h with or without AME pre-treatment for 1 h. Equal amounts of RNA were isolated using TRZOL Reagent and reverse transcribed into cDNA using the RevertAid First Strand cDNA Synthesis Kit according to the protocol described by the manufacturer. Products were amplified from cDNA templates with 35 cycles using primers for TNF-α and IL-1β (TNF-α forward: AAATTCGAGTGACAAGCCTGTAG and reverse: GAGAACCTGGGAGTAGACAAGGT; IL-1β forward: CAAGTGTCTGAAGCAGCTATGG and reverse: GAGATTTGAAGCTGGATGCTCT). The amount of TNF-α and IL-1β was determined and normalized to the amount of GAPDH cDNA.

In total, 1 × 106 Ana-1 macrophages were plated in a 6-well culture plate, and AGEs were added for 24 h with or without AME pre-treatment for 1 h. The cells were lysed with dissociation solution containing phosphatase, protease inhibitors and PMSF. The protein extracted from macrophages was electrophoresed on SDS-polyacrylamide gels (10%) and transferred to nitrocellulose membranes. Membranes were incubated with blocking buffer and then incubated with anti-phospho-p38 MAPK antibody at 4 °C overnight. The membranes were incubated with a peroxidase-conjugated secondary antibody and visualized by a super-enhanced chemiluminescence detection system. Densitometric analysis was performed by normalizing the band density to GAPDH.

In total, 1 × 106 Ana-1 macrophages were treated with AGEs for 24 h with or without AME pre-treatment for 1 h. The nuclear extract of cells was mixed with binding buffer and nuclease-free water. Then, biotin-labeled oligonucleotide probes of NF-κB were added according to the manufacturer’s protocol. The mixture was subjected to electrophoresis on 6% polyacrylamide gels and transferred to a nylon membrane. A chemiluminescent detection method was used according to the manufacturer’s description, and membranes were exposed to X-ray films.

The data are expressed as the mean ± SEM. Statistical analysis was performed by SPSS software using a one-way analysis of variance (ANOVA). Differences with a p value less than 0.05 were considered to be statistically significant.

Collectively, the results suggest that AME can inhibit the AGE-induced production of inflammatory cytokines in macrophages to down-regulate inflammation through p38 MAPK and NF-κB signaling pathways, indicating its potential application as an immunoregulatory agent in diabetes. Further studies will determine the functions and appropriate concentration of AME against inflammatory reactions in diabetic rats.

This work was supported by a grant from the Major State Basic Research Development Program of China (973 Program) (2012CB517700), the Key Basic Research Project of the Science and Technology Commission of Shanghai Municipality (10JC1413000) & the National Natural Science Foundation of China (30871175). 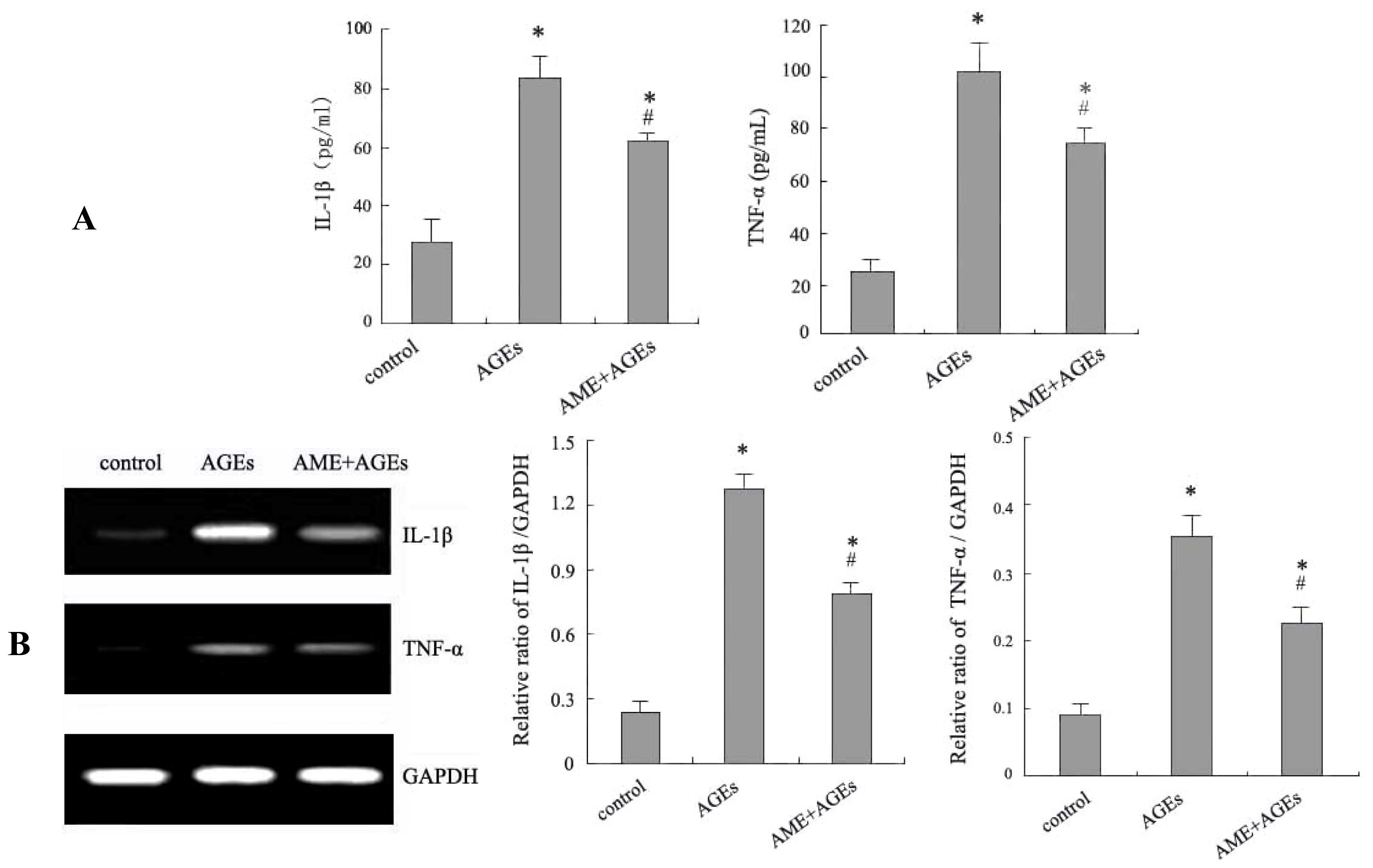