Gastric cancer (GC) is one of the most common malignant tumors in China with a high incidence and mortality rate [1,2]. GC is a complex disease as its pathogenesis includes the interaction between environmental exposure and genetic variations, which could result either directly or indirectly in systemic epigenetic control defects. Epigenetic events or a stably heritable phenotype in gene expression capacity through chromosome modifications without DNA sequence alterations have been studied to gain insight into the aetiology of the disease [3], and the results have focused attention on the links between epigenetic pathways and tumor initiation and progression. The most commonly studied epigenetic phenomenon is DNA methylation, an essential regulator of transcription and chromatin structure. In mammals, this mainly refers to the covalent post-replicative addition of a methyl group to the 5′ position of a cytosine in a CpG dinucleotide [4], which is conferred by DNA methyltransferases (DNMTs). DNMTs can be classified into three families: DNMT1, DNMT2 and DNMT3 (DNMT3A and DNMT3B) [5]. DNMT1 acts primarily as a maintenance methyltransferase at each cell division [6]. DNMT2, also named TRDMT1 (tRNA aspartic acid methyltransferase), is distinct and highly conserved among taxa, and mediates these activities in both DNA and RNA methylation [7]. DNMT3A and DNMT3B are considered to be de novo DNA methyltransferases during gametogenesis and embryogenesis [8,9]. DNMT3L methylation is often referred to as stimulating de novo methylation machinery by interacting with the catalytic domains of DNMT3A and DNMT3B [10].
The family of DNMTs provides a mechanism for the stable and heritable silencing of transcription, and plays a crucial role in the way that mammalian genomes are structurally organized, functionally regulated and perpetually maintained. It has been reported that DNMTs are essential for proper embryogenesis [11] and the formation of mature functional germ cells [12,13]. Likewise, aberrant DNA methylation patterns in a genetically susceptible background may be associated with increased risk of a series of human disorders [14–16], including cancer, such as GC [17]. In a systematic search, El-Maarri et al. demonstrated the polymorphisms in all coding regions of the five DNMT genes and confirmed the significant association between a rare DNMT3L variant (R271Q, i.e., rs113593938) and subtelomeric hypomethylation [18].
Most previous reports have focused on three functional enzymes, DNMT1, DNMT3A and DNMT3B [8,19], and there have been some studies of polymorphisms in these three DNMTs associated with GC [20–24]. However, the associations between these polymorphisms and clinical implications of GC are still uncertain. There have been few studies of the possible association of cancer susceptibility with the other DNMTs, such as DNMT2 and DNMT3L. In addition, the prevalence of DNMT SNPs in the southern Chinese population has not been documented. The present study was performed to evaluate whether the 16 SNPs in different DNMTs among 242 GC cases and 294 frequency-matched unaffected controls were associated with cancer susceptibility.

A total of 242 GC cases and 294 controls were included in this study, and the clinical characteristics of the cases and controls are detailed in Table 1. Males accounted for 71.9% of the cases compared with 59.5% of the controls. The mean ± SD age (at diagnosis) of the patients was 54.9 ± 12.5 years (range 21–79 years), and that of the controls was 58.4 ± 16.4 years (range 14–94 years). The distribution of gender and mean age between cases and controls indicated significant difference, so all statistical analyses were subsequently adjusted by sex and age. Of 242 patients, the most common specified sites were in cardia or spanned over two anatomical regions of the stomach, accounting for 90.1% of cases. A total of 63 patients (26.1%) were classified as well or moderately differentiated GC, 132 (54.5%) poorly differentiated GC and 19 (7.8%) signet-ring cell carcinomas, while the remaining 28 patients (11.6%) were unclassified. The cases consisted of 68 (28.1%) in the clinical stage I or II groups and 160 (71.9%) in the clinical stage III or IV groups. Only 26 patients (10.7%) were present in the early gastric cancer group, in which the depth invasion is confined to lamina propria or submucosa, 89.2% of patients were found to have advanced GC including T2, T3 and T4. For gastric cancer, infection with Helicobacter pylori is the main etiologic factor. However, infection with Helicobacter pylori had not received enough attention in gastric cancer until several years ago in China. Among these collected samples, patients collected in 2009 were not checked for the H. pylori infections, however, patients collected in 2010 were examined for the H. pylori infection. This leads to about 66% percent of samples that have lost the data of H. pylori infection. Therefore, information regarding infection with Helicobacter pylori was not present.

2.3. MAF of the Chosen SNPs with HapMap Data

The MAFs of the 10 SNPs investigated are summarized in Table 3. The MAFs in our study showed greater similarities with Beijing and Japanese populations, and greater differences with European and African populations. Moreover, there was a significant difference between cases and controls in our study for rs11254413 in DNMT2 (p < 0.01). Logistic regression analysis, adjusted for age and sex, showed the A allele of SNP rs11254413 with an odds ratio (OR) of 0.65 (95% confidence interval (95% CI): 0.48–0.87) for GC. However, no statistically significant associations were found between any of the other SNPs and GC.

2.5. Linkage Disequilibrium of the SNPs in DNMT1 and DNMT3A

2.6. Haplotypes of the SNPs in DNMT1 and DNMT3A

All subjects included in the present case-control study were recruited from the outpatient and inpatient clinics of the First Affiliated Hospital of Nanchang University, Nanchang, Jiangxi Province, China, from 2009 to 2010. Patients selected for the study were those with histologically-confirmed GC. Controls were randomly selected cancer-free individuals. The collection of samples and their utilization for research purposes were approved by the Southern Medical University Ethics Committee, and all subjects provided written informed consent prior to enrolment.
Peripheral blood samples were drawn from participants at the First Affiliated Hospital of Nanchang University. The samples were delivered in the frozen state by express mail to the School of Biotechnology, Southern Medical University, and stored at −70 °C until DNA extraction. Genomic DNA was extracted using a commercial blood DNA kit (TIANamp Genomic DNA Purification Kit; Tiangen Biotech, Beijing, China), according to the manufacturer’s instructions, and stored at −70 °C until use.

The inclusion criteria of candidate SNPs selection are SNPs among DNMT genes (DNMT1, DNMT2, DNMT3A, DNMT3B and DNMT3L) and previous literatures [18,21–24] have been reported the association with cancers, especially gastric cancer; SNPs data from the Han Chinese Population included in the HapMap, were also used to as referred [52]. Furthermore, SNPs failed in assay design were excluded. A total of 16 frequency-validated SNPs were selected for genotyping.
These 16 SNPs were genotyped using the SEQUENOM MassARRAY matrix-assisted laser desorption ionisation-time of flight mass spectrometry platform (Sequenom, San Diego, CA, USA). Primers for multiplex PCR and extended reactions were designed using proprietary software (Assay Designer, version 3.1; Sequenom: San Diego, CA, USA, 2006) provided by Sequenom Inc. In accordance with the manufacturer’s instructions, the first step was to amplify the genomic sequence containing the SNP by a standard PCR protocol, which would produce amplicons 80–120 bp in length. Excess PCR primers and unincorporated dNTPs were neutralized by incubation with shrimp alkaline phosphatase (SAP). Subsequently, the single-base extension (SBE) reaction was performed on the genomic amplification product using iPLEX enzyme and mass-modified terminators. The process was designed to generate SNP-specified DNA products of different lengths with predictable masses. The products of the iPLEX reaction were desalted and transferred onto a SpectroCHIP by the MassARRAY nanodispenser. The SpectroCHIP was then analyzed by the MassARRAY Analyzer Compact.

The genotypes were examined separately by a detailed quality control (QC) process. The SNP genotype threshold was set at 80%. SNPs not in Hardy–Weinberg equilibrium (p < 0.05) in the control samples were excluded from all analyses. SNPs with MAF ≤ 0.01 were also excluded from the subsequent analyses.
The results are expressed as proportions or means and standard deviation (SD). Differences in genotypes and alleles between GC patients and healthy controls were assessed using the χ2 test. The associations between GC and individual DNMT SNPs were estimated by logistic regression with adjustment for age and sex. Statistical analyses and haplotyping were performed using the web-based tool SNPstats [53]. Five genetic models (co-dominant, dominant, recessive, over-dominant, and log-additive) were chosen to evaluate the association between each SNP and GC risk. Two alternative models (co-dominant and overdominant) were fitted for each outcome, adjusting for age and gender as covariates. The linkage disequilibrium (LD) and pairwise LD coefficients in DNMT1 and DNMT3A were implemented with Haploview 4.2 (Daly Lab: Cambridge, MA, USA, 2008). All comparisons were two tailed, and p < 0.05 was considered to indicate statistical significance.

In the present study, we evaluated 16 SNPs in an independent population and showed that polymorphisms of three genetic variants, defined by rs16999593 in DNMT1, rs11254413 in DNMT2 and rs13420827 in DNMT3A, were associated with GC susceptibility in a southern Chinese population. Although the other 13 SNPs failed to show significant associations with GC in the present population, these results suggest that DNMTs are involved in gastric carcinogenesis. However, the present study was carried out in a relatively small population with less than 300 cases or controls, furthermore, after multiple comparison adjustment, only rs11254413 in DNMT2 still showed significant association. Additional studies using a larger sample size are required to confirm our findings. To elucidate the true effects of DNMT polymorphisms in determining the pathogenesis of GC, investigations of other variants and their influence on the biological functions of DNMTs are also required.

This work was supported by Key Programs for Science and Technology Development of Guangzhou (Grant no.2008A1-E4151). 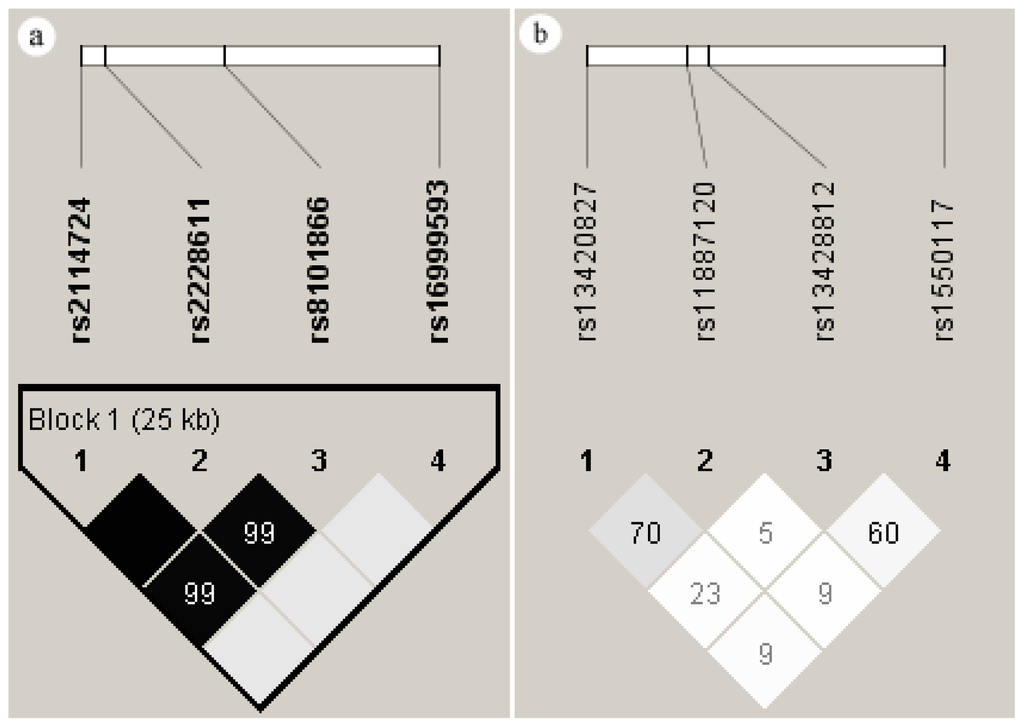 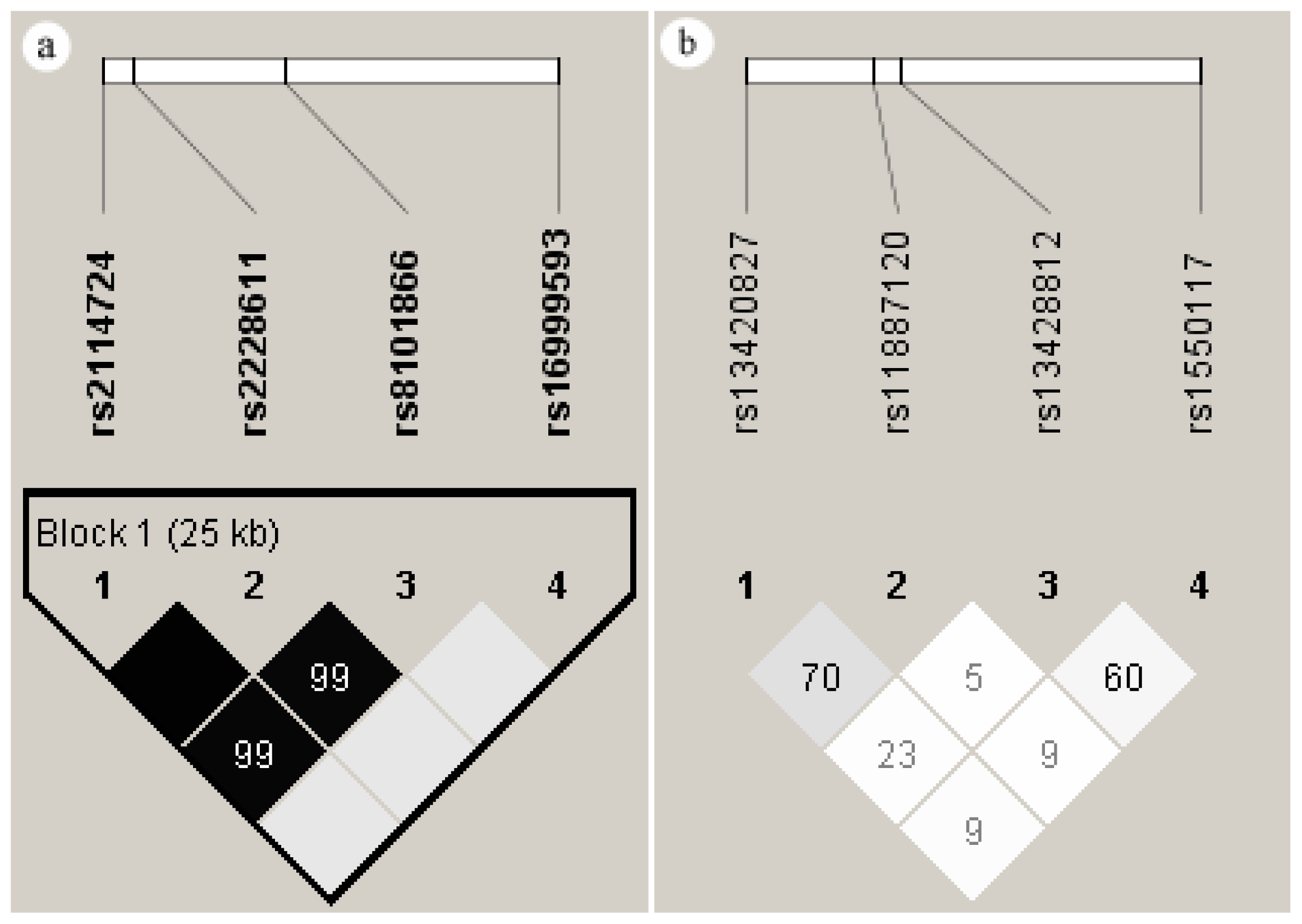 Table 3. Interethnic comparisons of minor allele frequencies for 10 SNPs in our subjects with HapMap data.