10-Hydroxycamptothecin (HCPT) (Figure 1), one of the natural camptothecin analogues, has been shown to have a broad spectrum of antitumor activity against breast, colon, lung, and ovarian cancers in clinical practice. More importantly, HCPT was shown to be more potent and less toxic than camptothecin(CPT) in experiments on animals and in human clinical evaluations, mainly in China [1,2]. However, due to its poor solubility in water or in physiologically acceptable organic solvents and in vitro and in vivo instability, clinical practical use of HCPT is limited [3]. The earlier clinical trials using its highly water-soluble sodium salt, HCPT-Na+, which was the product of opening the lactone ring of HCPT, showed minimal anticancer activity and several unpredictable side effects such as myelosuppression, hemorrhagic cystitis, diarrhea, nausea, vomiting, and dermatitis. The lactone form is a more effective inhibitor of topoisomerase I compared to the carboxylate form, which has much lower anti-tumor activity [4]. Therefore, it is of great significance in developing the high performance delivery systems for the insoluble lactone form 10-HCPT. Recently, some novel delivery systems of HCPT have been reported, such as nanosuspensions [5], prodrugs [6–9], nanoparticles [10,11], microspheres [12–14], niosomes [3], emulsions [15] and polymeric micelle systems [16,17]. Among these tested approaches, nanosuspensions system, a sub-micro colloidal dispersion system, is considered as one of the most promising methods because of its characteristics in drug loading, release, delivery, stability and various options for administration, such as oral, parenteral, ocular and pulmonary pathways [18]. Production technologies of nanosuspensions currently used are pearl milling and high-pressure homogenization either in water or alternatively in mixtures of water with water miscible liquids or non-aqueous media, such as liquid polyethylene glycols or oils. Supercritical antisolvent (SAS) is a new micronization technology that has been developed in recent years. It is suitable to prepare nanocrystals of drugs or biologically active substances because of their low temperature and inertia. Until now, many bioactive materials have been successfully processed into nanocrystals [19–24].
However, no report has been carried out on the micronization of HCPT using SAS process. Therefore, the aims of this work are to study the feasibility of HCPT nanoparticle preparation by SAS process and to evaluate the SAS process factors which influence the mean particle size (MPS) of HCPT nanoparticles. The effects of concentration of HCPT solution, precipitation temperature, precipitation pressure and drug solution flow rate on the MPS of HCPT nanoparticles were studied by a four-factor, four-level OAD with an OA16 (45) matrix. Moreover, characterization of HCPT nanoparticles was analyzed by SEM, DLS, FTIR, LC-MS, XRD and DSC with the purpose of developing a suitable drug delivery system of cancer chemotherapy, nanosuspension of close-ring HCPT.

The morphology analysis of HCPT particles was carried out using SEM (Quanta 200, FEI). The samples were prepared by direct deposition of the powders onto a carbon tape placed on the surface of an aluminium stub. Before analysis, the samples were coated with gold for 4 min using a sputter coater.

Micronized HCPT was suspended in filtered pure water and special cares were taken to eliminate dust and to avoid the aggregation of particles. The water was pre-saturated with HCPT to avoid dissolution of the micronized particles. The suspension was analyzed in DLS (ZetaPALS, Brookhaven Instruments). Every measurement was repeated at least three times.

The HCPT particles were diluted with KBr mixing powder at 1% and separately pressed to obtain self-supporting disks. The FTIR spectrum was obtained by IRAffinity-1 (SHIMADZU, Jepan) and recorded in the wave number range of 4000–500 cm−1 at a resolution of 4 cm−1.

The HCPT particles were dissolved in ethanol and LC-MS was obtained by analyst 1.4 of AB API 3000 (USA). The mass spectrometer was operated in positive ion mode.

10 mg samples of HCPT particles, forming a weighted dispersion on a glass slide, were evaluated using an X-ray powder diffractometer (Philips, Xpert-Pro, The Netherlands). The samples were irradiated using a Cu target tube at 30 mA and 50 kV. The samples were filled to the same depth inside the sample holder by leveling with a spatula. The scanning rate (5° min.) was constant for all XRD analysis.

100 mg sample was added to a 500 mL dissolution medium (6.4 g Na2HPO4, 12H2O; 0.6 g KH2PO4; 5.85 g NaCl in 1000 mL distilled water; pH 7.4). Bath temperature and paddle speed were set at 37 ± 0.5 °C and 100 rpm. At selected periods of 5, 10, 15, 30, 45, 60 and 120 min, 2 mL aliquots were withdrawn without media replacement, filtered, and analyzed using reversed-phase HPLC (waters) at λ = 266 nm. The data was expressed as a mean value ± S.D (n = 6). The percentage of cumulated dissolution was defined as the sum of the mass of dissolved HCPT at time t, divided by the mass of added HCPT (100 mg). The dissolution profiles were plotted as the percentage of cumulated dissolution versus incubation time.
Filtered samples were appropriately diluted with methanol and assayed for HCPT concentration by HPLC. Chromatographic analyses were performed on a waters HPLC system consisting of a pump (Model 1525), an auto-sampler (Model 717 plus), UV detector (Waters 2487 Dual λ Absorbance Detector). The C18 reverse phase column (Diamonsil, μm, 4.6 mm × 250 mm, Dikma Technologies) was used at room temperature. The mobile phase consisted of 70% acetonitrile delivered at 1.0 mL/min. The injection volume was 10 μL. The signal was monitored at 266 nm.

The first step in the SAS micronization process is to optimize the operating conditions to obtain a minimum MPS of micronized HCPT. Since various parameters potentially affect the micronization process, the optimization of the experimental conditions is a critical step in developing an SAS method. In fact, the concentration of drug solution, precipitation temperature, precipitation pressure and drug solution flow rate are generally considered the most important factors that affect the MPS of HCPT. The investigated levels of each factor were selected depending on the preliminary experiment results of the single-factor. The optimization of the suitable operating conditions in SAS can be carried out step by step or by using an experimental design. In the present study, all selected factors were examined using an orthogonal OA16 (45) test design. The total evaluation index was used to analyse by statistical methods. The analysis results of orthogonal test, performed by statistical software Design Expert 7.0, are presented in Table 1. Table 2 lists the data of the analysis of variance (ANOVA) table of this experiment. The results of experiments presented in Table 2 indicate that the MPS of micronization HCPT varied between 210.5 and 900.7 nm. The maximum MPS was found for trial 16 and the lowest for trial 2. The factors influence the MPS of micronization HCPT were listed in a decreasing order as follows: A > C > B > D according to the R value. So, the minimum MPS of micronization HCPT was obtained when the concentration of HCPT solution, precipitation temperature, precipitation pressure and drug solution flow rate were A1B1C3D2 (0.5 mg/mL, 35 °C, 20 MPa and 6.6 mL/min), respectively. Through a confirmatory test, smaller micronized HCPT was obtained, with a MPS of 180 ± 20.3 nm.

3.2. Effect of Operating Conditions on the MPS of Micronized HCPT

Figure 4 shows the SEM photomicrograph of original HCPT particles. As we can see, commercial HCPT particles are not uniform and basically pillar or bar shaped. The average particle size was found to be about 1 × 1 × 50 μm. Figure 5a shows the SEM images of HCPT nanoparticles precipitated from DMSO under the optimum SAS process condition (0.5 mg/mL of concentration of HCPT solution, 35 °C of precipitation temperature, 20 MPa of precipitation pressure and 6.6 mL/min of HCPT solution flow rate), from which it is obvious that the HCPT nanoparticles are close to ellipsoidal with the MPS of 180 ± 20.3 nm and the particle size distribution (PSD) is shown in Figure 5b.

The unprocessed and processed HCPT samples were evaluated by using LC-MS to determine the molecular weights, as shown in Figure 7. It can be seen that no modification occurred in molecular weight (364.5). The two forms exhibit the mass spectral peak, at 365.5, coming from the [C20H16N2O5 + H]+ peak. This explains why there were no varieties about chemistry structure of HCPT before/after SAS process. Therefore, the SAS process has not induced degradation of HCPT.

In order to further investigate particles, crystalline XRD analysis was performed. Figure 8 shows the XRD results for unprocessed HCPT particles and HCPT nanoparticles. The presence of several distinct peaks in the XRD of unprocessed HCPT at the diffraction angles of 2θ = 13.821°, 11.659°, 25.640°, 13.521°, 6.900°, 28.260°, 27.919° and 27.219° reveals that the drug is present as a crystalline form. On the other hand, HCPT nanoparticles were characterized by the complete absence of any diffraction peak corresponding to unprocessed HCPT. This fact suggests that HCPT particles after SAS processing are no longer present in crystalline form, but exist in the amorphous state. Less crystalline smaller drug particles are higher in the dissolution rate or bioavailability than crystals and, thus, the therapeutic action is obtained in shorter times.

The authors are grateful for the precious comments and careful corrections made by anonymous reviewers. The authors would also like to acknowledge the financial support from the Special Fund for Forestry Scientific Research in the Public Interest (2010040072), 948 Project of the State Forestry Administration of China (2010-4-20) and the Fundamental Research Funds for the Central Universities (DL09BB08). The authors are also grateful to Lin Zhang for performing the LC-MS analysis. 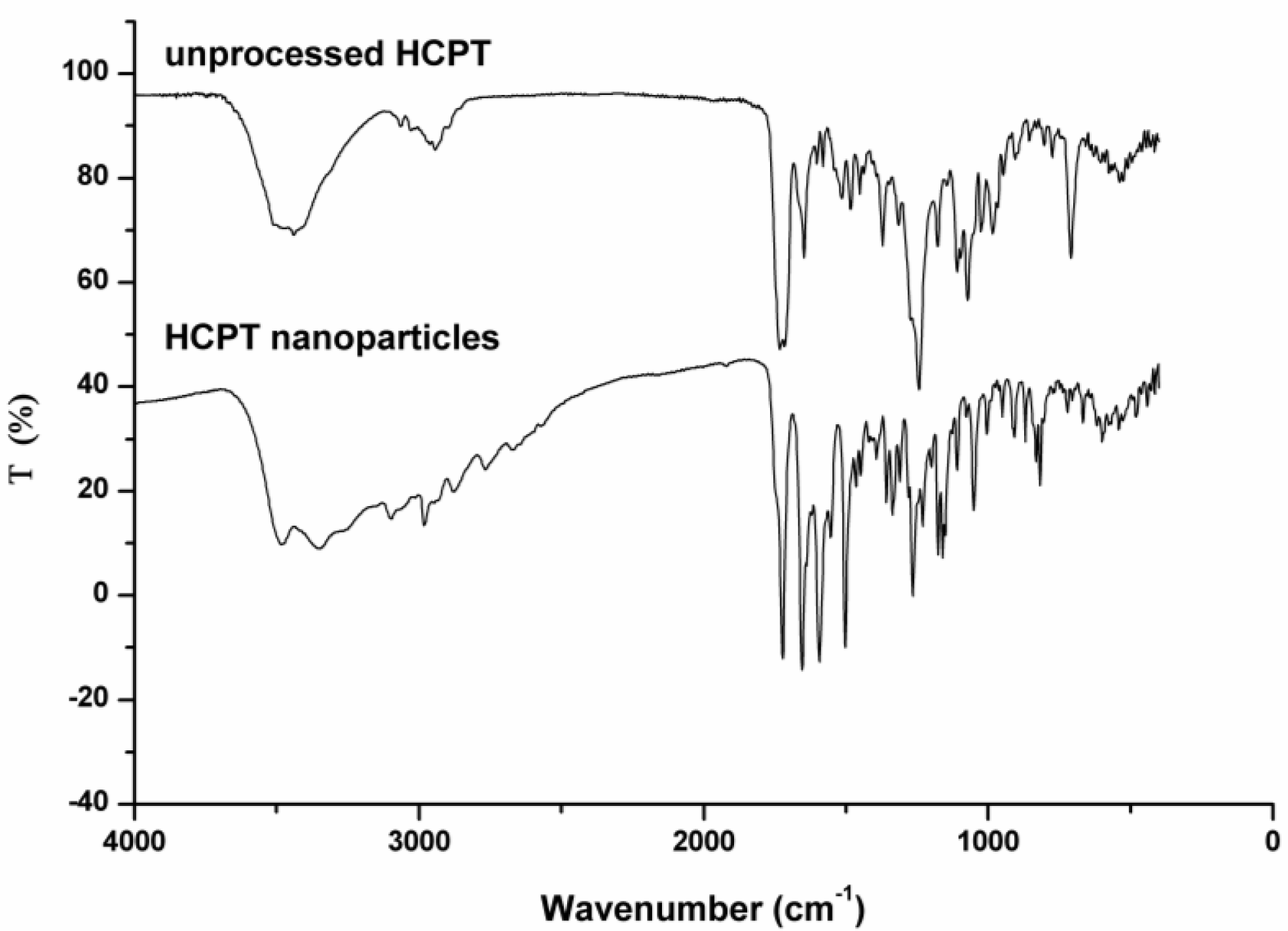 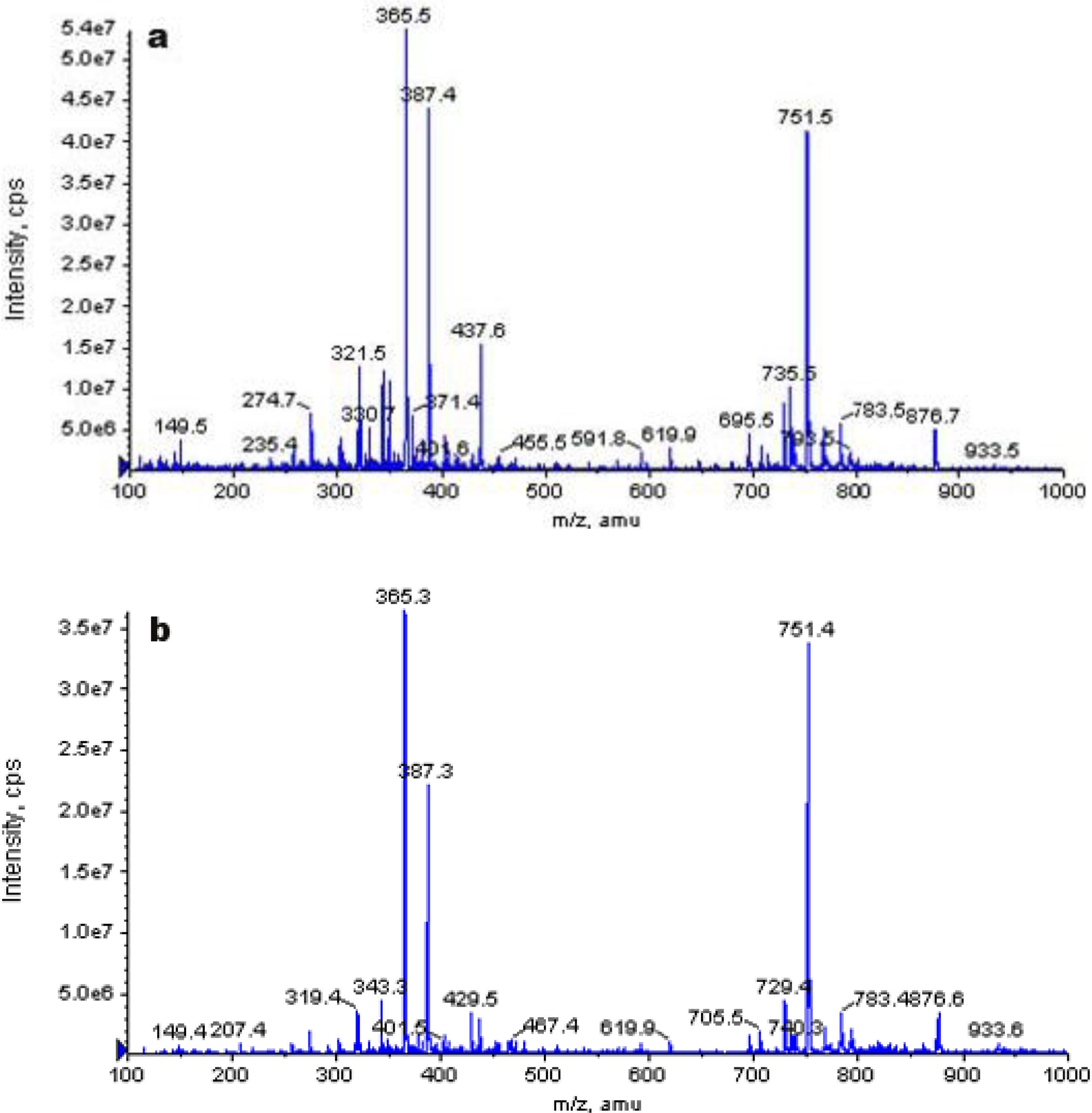 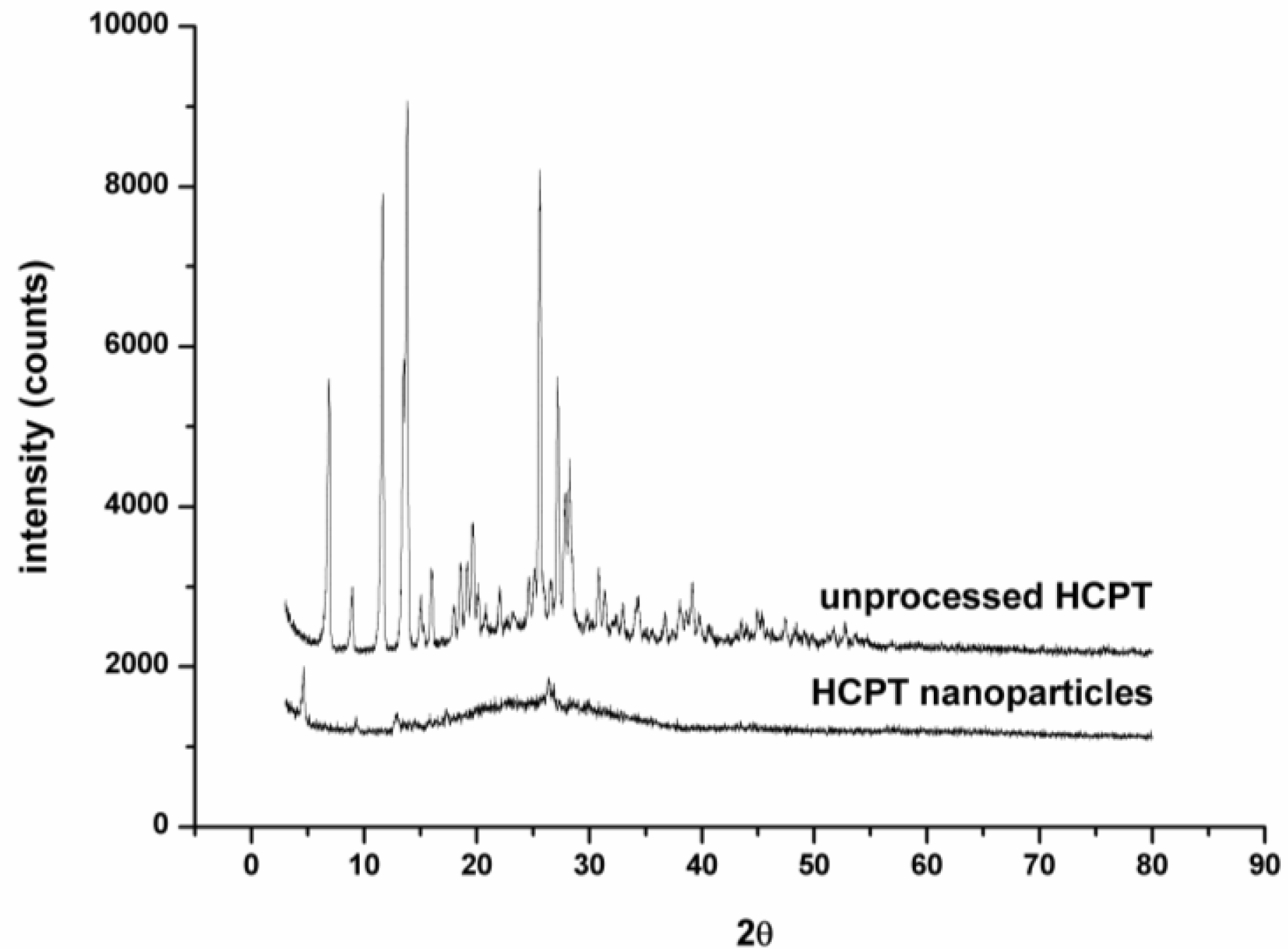 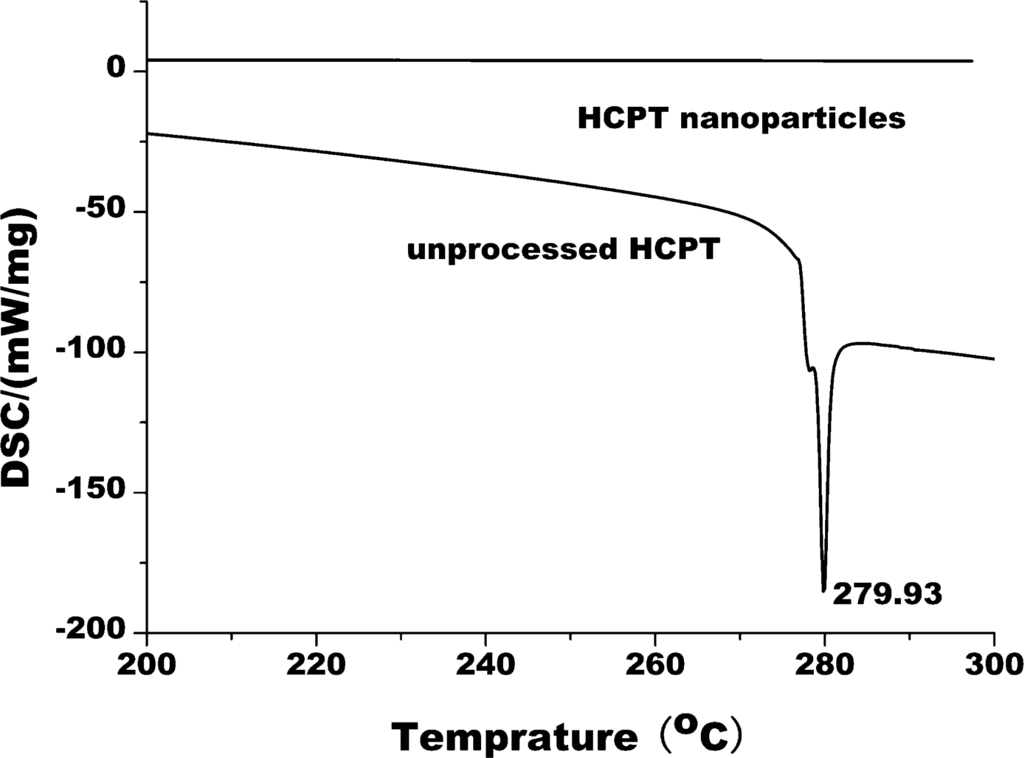