Combined 3D-QSAR, Molecular Docking and Molecular Dynamics Study on Derivatives of Peptide Epoxyketone and Tyropeptin-Boronic Acid as Inhibitors Against the β5 Subunit of Human 20S Proteasome

An abnormal ubiquitin-proteasome is found in many human diseases, especially in cancer, and has received extensive attention as a promising therapeutic target in recent years. In this work, several in silico models have been built with two classes of proteasome inhibitors (PIs) by using 3D-QSAR, homology modeling, molecular docking and molecular dynamics (MD) simulations. The study resulted in two types of satisfactory 3D-QSAR models, i.e., the CoMFA model (Q2 = 0.462, R2pred = 0.820) for epoxyketone inhibitors (EPK) and the CoMSIA model (Q2 = 0.622, R2pred = 0.821) for tyropeptin-boronic acid derivatives (TBA). From the contour maps, some key structural factors responsible for the activity of these two series of PIs are revealed. For EPK inhibitors, the N-cap part should have higher electropositivity; a large substituent such as a benzene ring is favored at the C6-position. In terms of TBA inhibitors, hydrophobic substituents with a larger size anisole group are preferential at the C8-position; higher electropositive substituents like a naphthalene group at the C3-position can enhance the activity of the drug by providing hydrogen bond interaction with the protein target. Molecular docking disclosed that residues Thr60, Thr80, Gly106 and Ser189 play a pivotal role in maintaining the drug-target interactions, which are consistent with the contour maps. MD simulations further indicated that the binding modes of each conformation derived from docking is stable and in accord with the corresponding structure extracted from MD simulation overall. These results can offer useful theoretical references for designing more potent PIs. View Full-Text
Keywords: ubiquitin-proteasome; 3D-QSAR; CoMFA; CoMSIA; homology modeling; molecular docking; molecular dynamics ubiquitin-proteasome; 3D-QSAR; CoMFA; CoMSIA; homology modeling; molecular docking; molecular dynamics
►▼ Show Figures 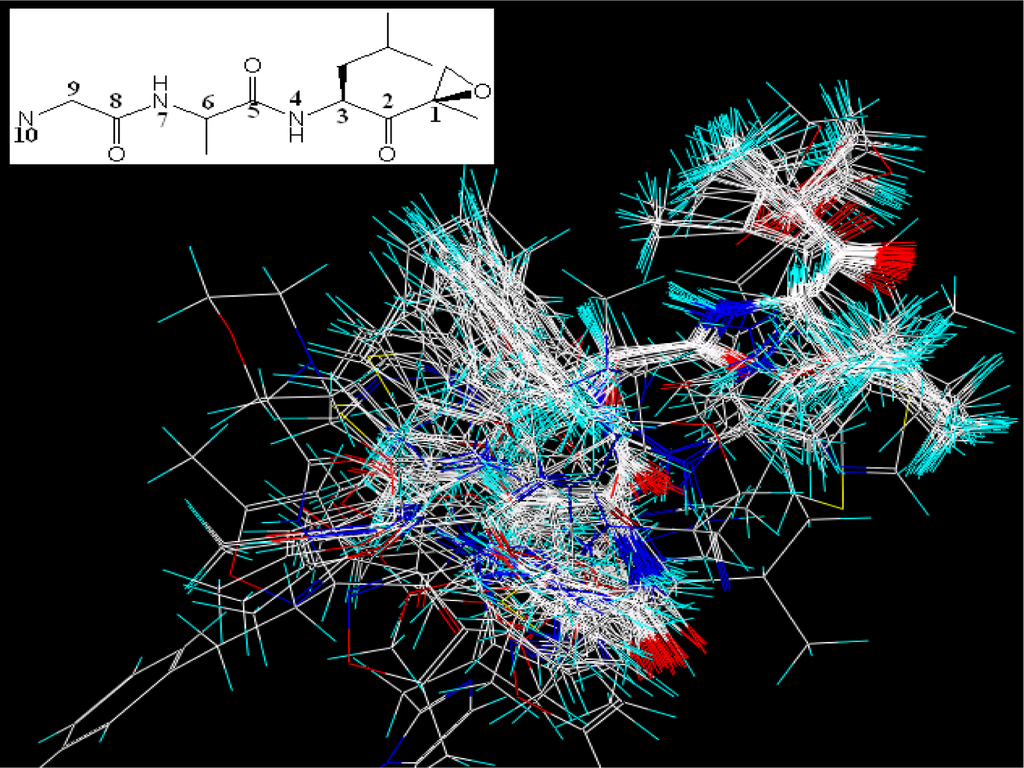