Microcystins (MC) are potent hepatotoxins produced by the cyanobacteria of the genera Planktothrix, Microcystis, Aphanizomenon, Nostoc and Anabaena. These cyclic heptapeptides have strong affinity to serine/threonine protein phosphatases (PPs) thereby acting as an inhibitor of this group of enzymes. Through this interaction a cascade of events responsible for the MC cytotoxic and genotoxic effects in animal cells may take place. Moreover MC induces oxidative stress in animal cells and together with the inhibition of PPs, this pathway is considered to be one of the main mechanisms of MC toxicity. In recent years new insights on the key enzymes involved in the signal-transduction and toxicity have been reported demonstrating the complexity of the interaction of these toxins with animal cells. Key proteins involved in MC up-take, biotransformation and excretion have been identified, demonstrating the ability of aquatic animals to metabolize and excrete the toxin. MC have shown to interact with the mitochondria. The consequences are the dysfunction of the organelle, induction of reactive oxygen species (ROS) and cell apoptosis. MC activity leads to the differential expression/activity of transcriptional factors and protein kinases involved in the pathways of cellular differentiation, proliferation and tumor promotion activity. This activity may result from the direct inhibition of the protein phosphatases PP1 and PP2A. This review aims to summarize the increasing data regarding the molecular mechanisms of MC toxicity in animal systems, reporting for direct MC interacting proteins and key enzymes in the process of toxicity biotransformation/excretion of these cyclic peptides. View Full-Text
Keywords: cyanobacteria; microcystins; animal cells; mitochondria; apoptosis cyanobacteria; microcystins; animal cells; mitochondria; apoptosis
►▼ Show Figures 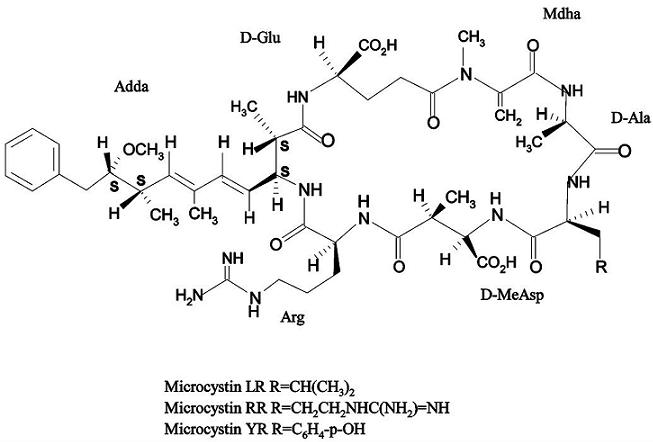