Kinetics of Cr(III) ions transport through a bulk liquid membrane containing dinonylnaphthalenesulfonic acid (DNNSA) as a carrier, flowing over aqueous phases, has been examined. Special attention has been paid to the effect of the membrane’s velocity flow on the chromium concentration decrease in a feed phase. For the description of relationships of chromium(III) concentration in particular phases with the time, a model based on the assumption of consecutive first-order reactions was proposed. Satisfactory compatibility of experiments and model results have been obtained both for the membrane flow velocities below 0.0034 m·s-1 when the interfaces begin to fluctuate slightly and for low initial Cr(III) concentration in the feed phase.
Keywords: Transport kinetics of chromium(III); dinonylnaphthalenesulfonic acid (DNNSA); bulk liquid membrane Transport kinetics of chromium(III); dinonylnaphthalenesulfonic acid (DNNSA); bulk liquid membrane

Liquid membranes (LM) have appeared quite recently as a new prospective separation method. LM soon became very popular in various fields due to their good selectivity and efficiency achieved by the presence of a mobile and selectively acting agent (a carrier). The most popular application of liquid membranes concerns the removal and recovery of metal ions from wastewaters [1–3].
Chromium is one of the most important metals used commonly both in various processes and in production of different products. Because of its high toxicity and limited resources chromium discharges into the environment are strictly regulated.
Simultaneously to the works improving conventional methods of chromium separation intensive research has been conducted on new methods (for example liquid membranes). Most of these studies are focused on chromium(VI) [4–6] because of its hazardous properties. Chromium(III), as a non toxic form, is largely ignored by the most researchers, but a high concentration of chromium(III) not only has a negative influence on living organisms but also oxidizes, in the environment, to chromium(VI) [7,8].
The results of our investigation of the kinetics of Cr(III) ion transport through a bulk liquid membrane containing dinonylnaphthalenesulfonic acid (DNNSA) as a carrier, flowing over aqueous phases, are presented in this paper.

All experiments were performed in a system where aqueous phases flow over the membrane. The scheme of the experimental setup is shown in Figure 1.
It consists of two separate Plexiglass vessels containing aqueous phases. The feed phase (F) was a chromium chloride solution (CrCl3 analytical grade, POCh) with an initial Cr(III) concentration of CP = 0.019, 0.038 and 0.058 M and pH = 4. The pH was adjusted with 0.1 M NaOH (NaOH analytical grade, Chempur). The stripping phase (S) was an aqueous 4 M H2SO4 (95% H2SO4 analytical grade, Chempur) solution. The volumes and the interfaces of both phases were the same and equal: V = 400 cm3, F = 56 cm2. Aqueous phases were mixed by magnetic stirrers (1) at a rotation rate of 50 rpm.
The liquid membrane (M) was an organic phase containing the dinonylnaphthalenesulfonic acid (DNNSA, Fluka) as a carrier dissolved in a mixture of kerosene and o-xylene. The concentration of DNNSA was CDNNSA = 0.2 mol·dm−3. The membrane circulated between the vessels with velocity of flow w = 0.0027, 0.0034 and 0.0049 m·s−1. The flow of the liquid membrane was forced by peristaltic pumps (P1, P2) ensuring good mixing of the membrane. For the better flow stability of the membrane the overflow weirs to the vessels were fixed. The physico-chemical parameters of each phase were investigated earlier [9] and in the experiment the optimal ones were used.
The samples of aqueous phases were taken out by sockets (2) and chromium concentration was determined with a SPEKOL 220 spectrophotometer at a wavelength of 595 nm. The corresponding chromium concentration in the membrane was established from the material balance. The measuring setup was placed in thermostat and all experiments were performed at 25 ± 1°C.

The extraction reaction on the feed side (F) interface of a liquid membrane (M) can be written as follows [10]: and the reaction on the stripping side interface of the liquid membrane in the presence of H2SO4 assumes the following form:
According to these reactions the transport of chromium(III) is coupled by countercurrent transport of H+ ions. The mechanism of coupled countercurrent transport of Cr(III) ions through the membrane is schematically presented in Figure 2.
The variation of chromium(III) concentration in individual phases vs. time (as shown in a later Section) suggests that the ion transport obeys the kinetic laws of two consecutive irreversible first-order reactions according to the scheme: where: Cr(III)F, Cr(III)M, Cr(III)S – are the chromium(III) ions in the feed, membrane and stripping phases, respectively, and kF, kS - are the pseudo-first-order apparent membrane entrance and exit rate constants, respectively.
It is evident that the presence of the proton gradient drives the whole transport process to completion without any back leakage of chromium(III) ions.
Using the reduced concentrations: , , , where: CF, CM, CS - chromium concentration appropriate in a feed, membrane and strip-ping phase, Cp – initial chromium concentration in a feed phase;
The above kinetic scheme may be described by the following set of equations [11]:
Since kF ≠ kS, after integration of those equations, we get:
RF decreases mono-expotentially with time, whereas the time variation of both RM and RS is bi-exponential. Additionally RM has a maximum (for dRM/dt = 0) which allows for calculation of maximum values of time and chromium concentration in the membrane, according to the following equations:
Differentiating the eqs. (6–8) the entrance (JF) and exit (JS) fluxes may be calculated. They are described by the following equations:
At t = 0, when the concentration of chromium in the feed phase is equal to the initial concentration (CF = CP) the flux JF assumes the following form:
The value of the flux JS at t = tmax, when the concentration of chromium in the membrane reaches its maximum (CM = Cmax), can be calculated from the equation:

3.2. Effect of the velocity of the membrane’s flow

3.3. Effect of initial chromium(III) concentration in the feed phase

For the description of dependence of chromium(III) concentration in particular phases vs. time, in the system with the flowing liquid membrane, a model based on the assumption of consecutive first-order reactions was proposed. Satisfactory compatibility of experiments and model results were stated for cases when the velocity of the membrane flow was in the range of 0.0027 – 0.0049 m/s and the initial chromium(III) concentration in the feed phase was below CF = 3.8·10−5 m·s−1. Decrease in the velocity of the membrane-flow and increase in the initial chromium(III) concentration in the feed phase caused decrease in the rate and efficiency of the ion transfer. Additionally, the discrepancy between the experimental data and theoretical predictions increased. 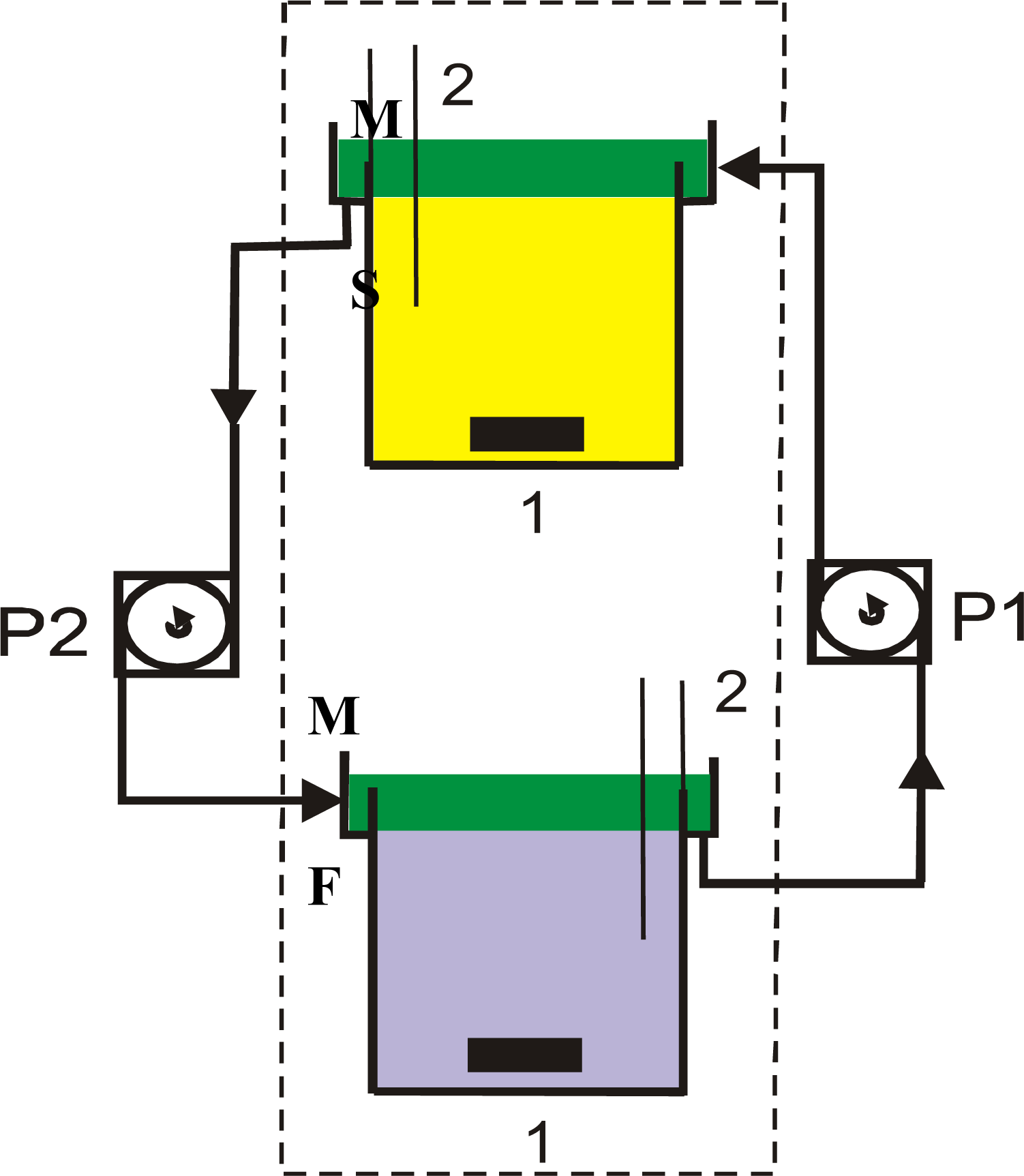 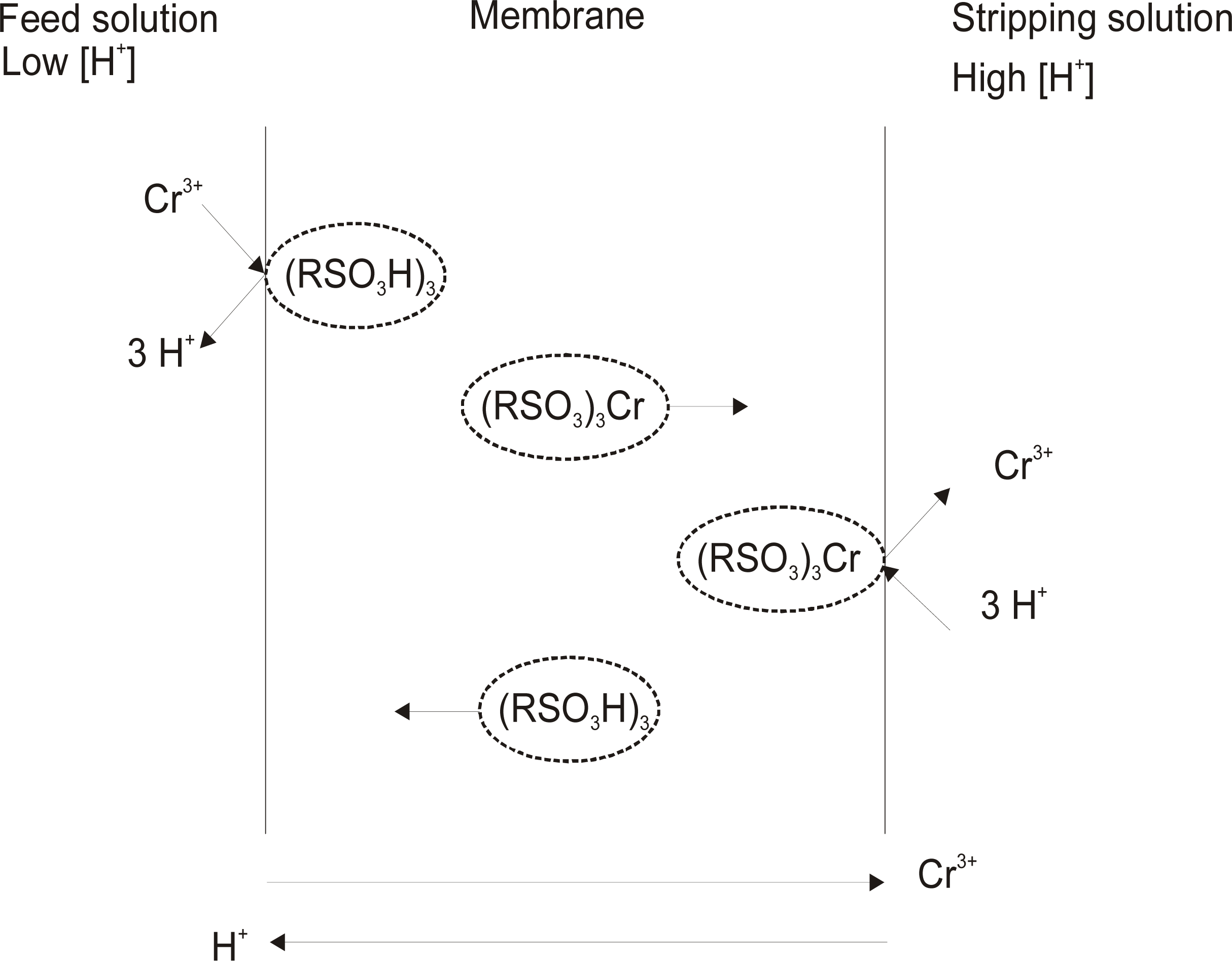 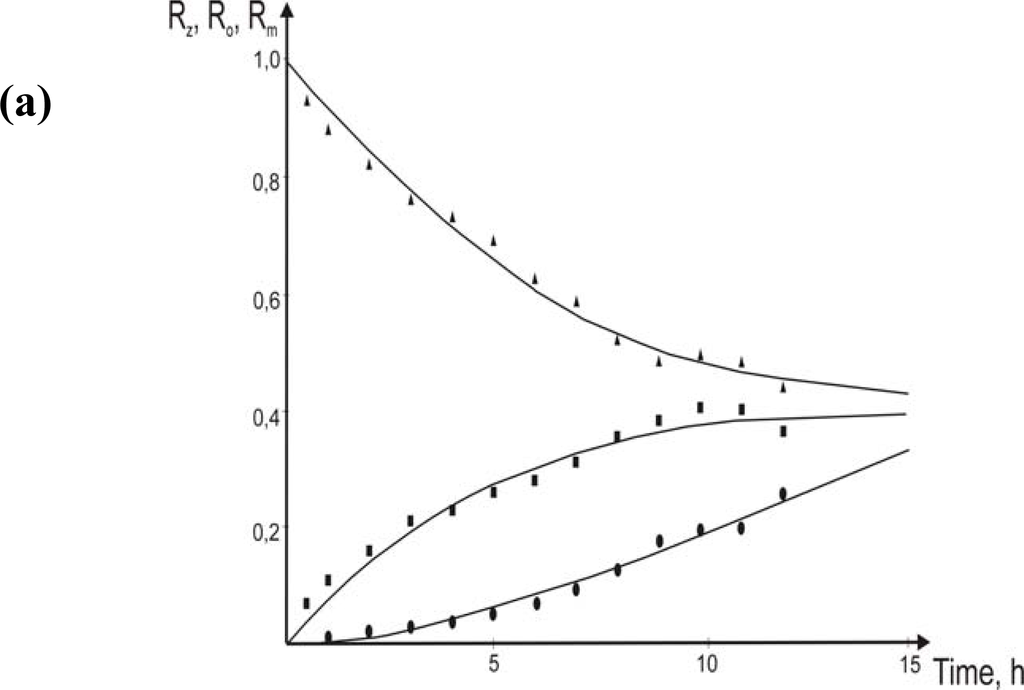 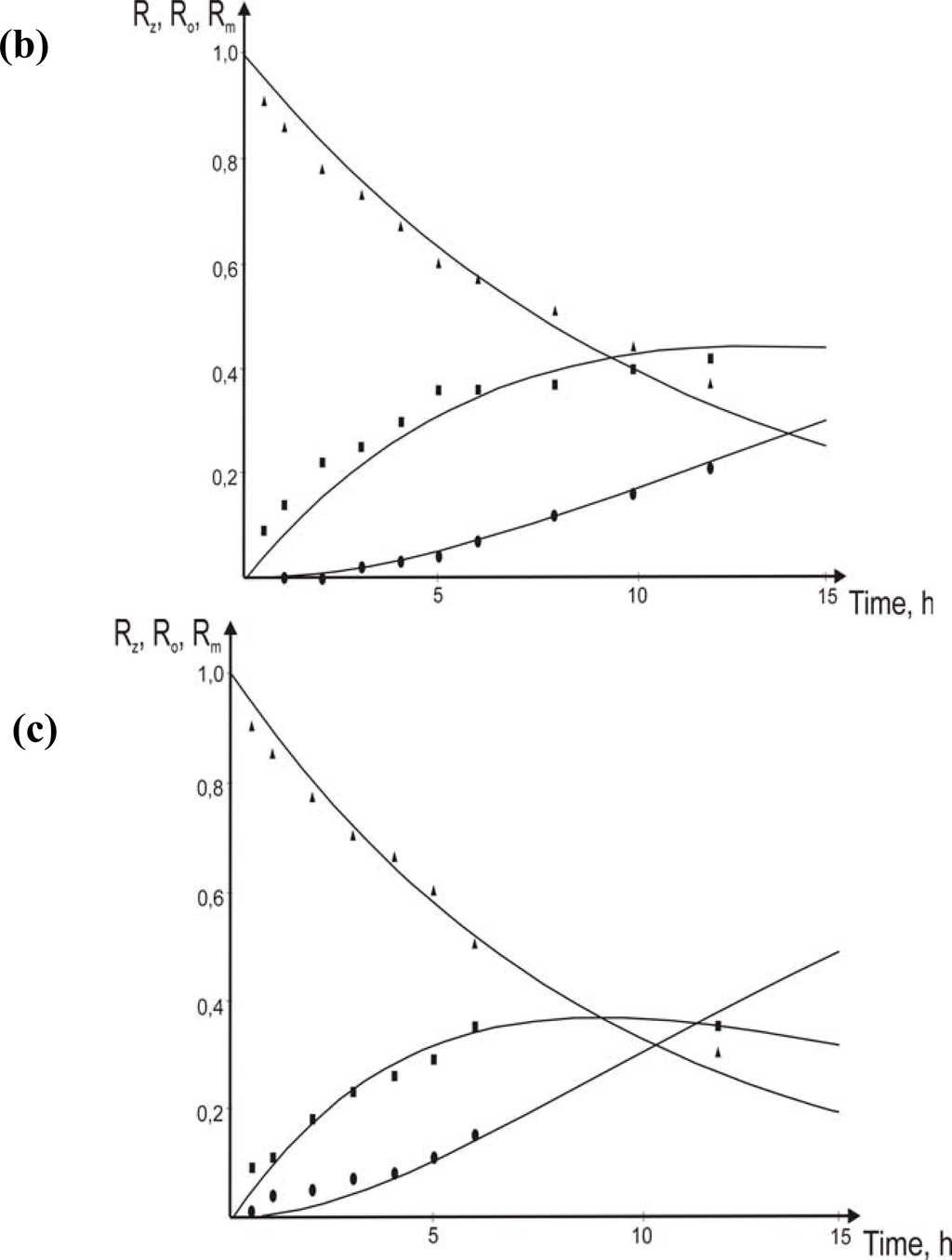 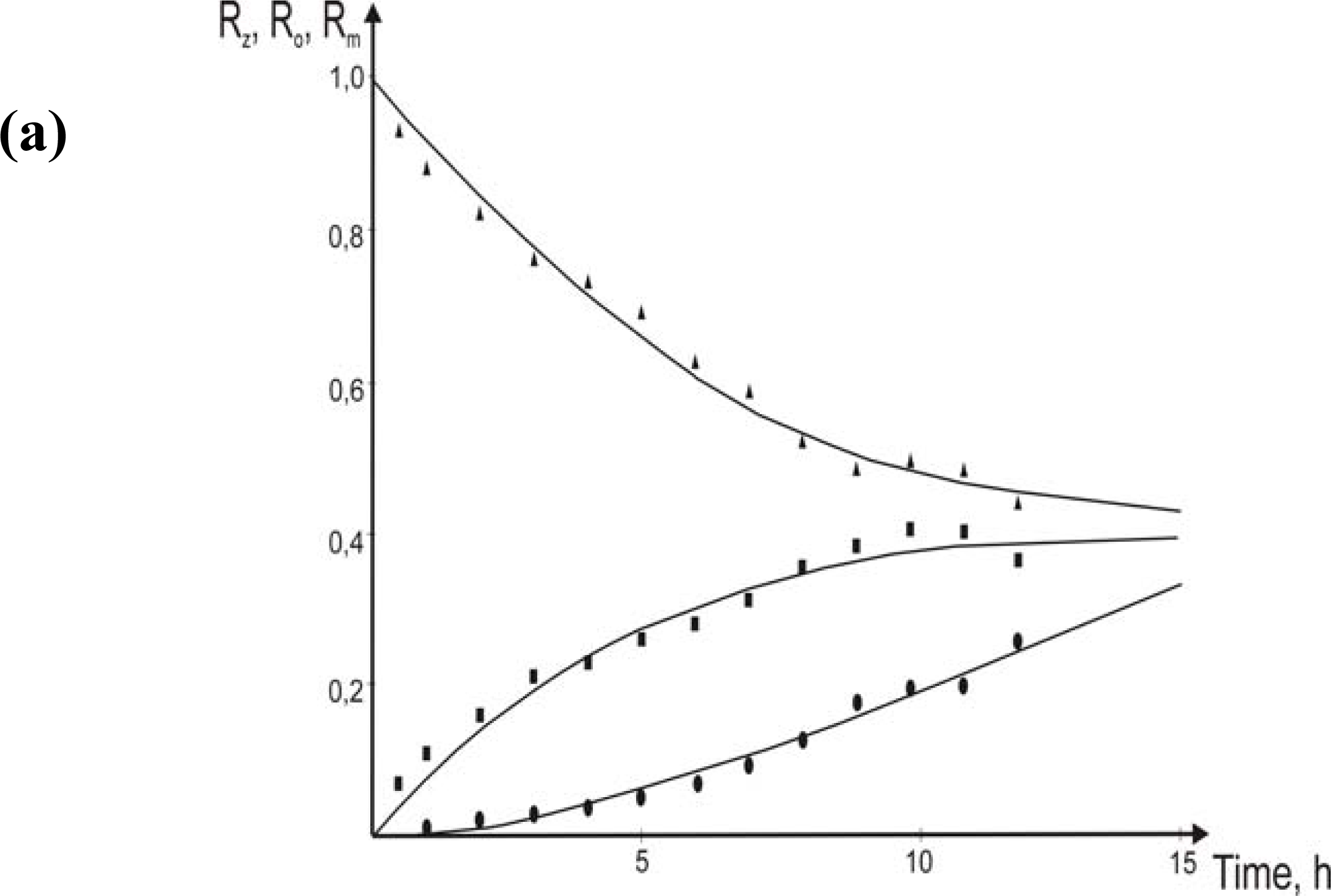 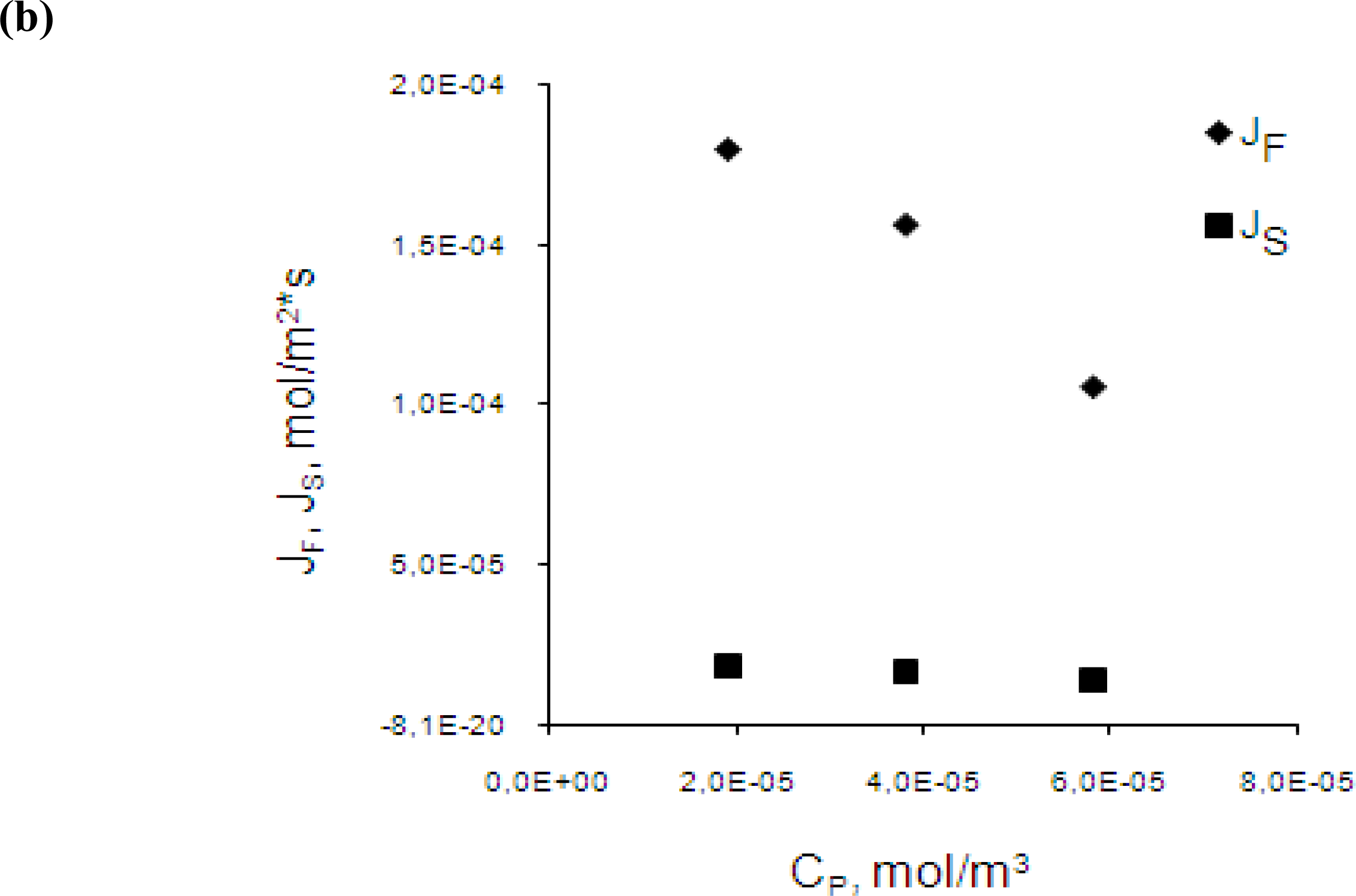 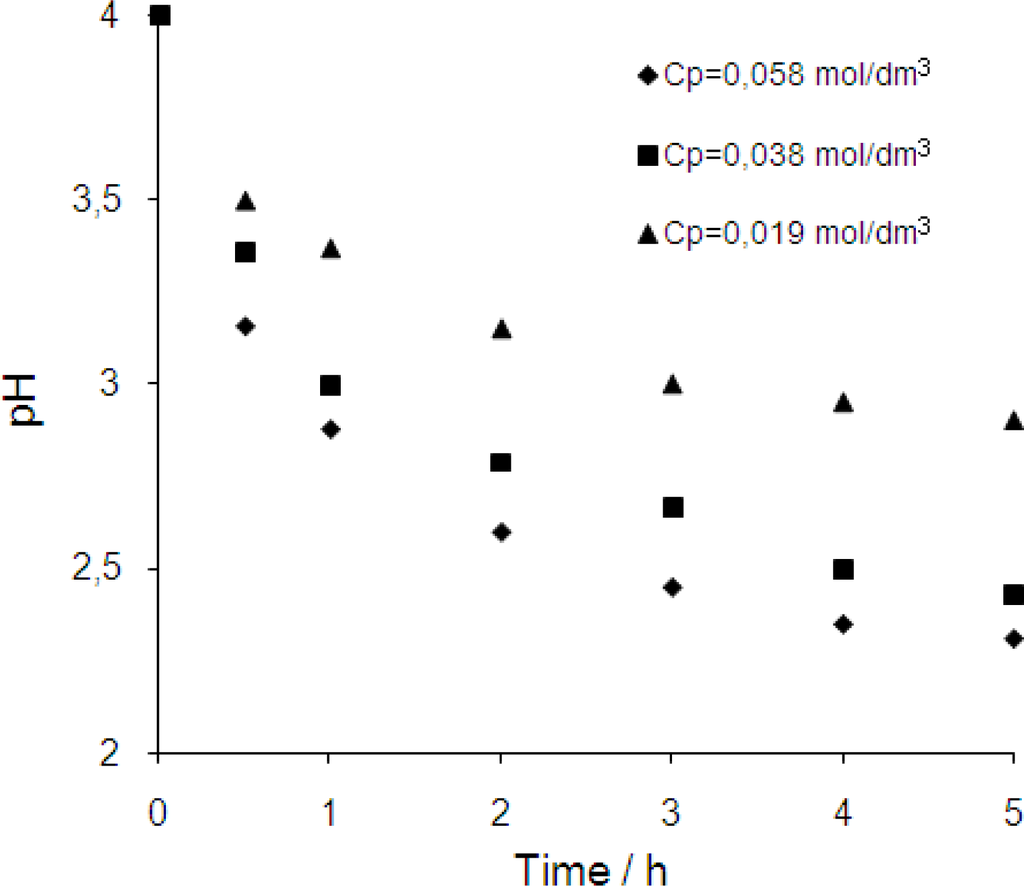