The synthesis of receptors designed to coordinate anions is an area of intense current research activity. This is because anions are known to play ubiquitous roles in both chemical and biochemical processes. Indeed, they can act as substrates or cofactors for enzymes [1], and as nucleophiles, base, redox agents and phase transfer catalysts. During the last few years, the combination of LA and NH group as a hydrogen bond donor have been demonstrated to be essential components for anion recognition [2], but more recently the ability of 1,3-disubstituted imidazolium cations to enter into hydrogen bonds with halide ions has developed from not possible to widely accepted using solid-state X-ray crystallography and binding experiments followed by 1H-NMR spectroscopy [3,4,5,6,7,8]. As part of our investigations into ionic liquids based on imidazolium salts as Lewis acid catalysts [9], and imidazolium based receptors, where we have shown that chiral tripodal systems utilizing the imidazolium moiety may distinguish between a pair of enantiomeric anions [10], we have developed efficient syntheses for several interesting ferrocenyl imidazole derivatives [11] which have shown to have properties as Lewis acids and as anion receptors.

The ferrocenyl imidazolium salts 2-6, synthesised according to Scheme 1, were first tested in the Diels-Alder reaction between methacrolein and cyclopentadiene at low temperature and were shown to act as Lewis acids to produce the desired endo and exo products in yields between 30 and95% and endo/exo selectivities of between 75 and 95%. The same reaction carried out without imidazolium salt present gave no product.

The reversibility of the ferrocene / ferrocenium redox couple in receptors 2-5 was examined and the values obtained for |Epa - Epc| imply good reversibility for a two electron reaction and values of ipa / ipc are all close to unity further supporting this claim, Table 1. The same observations were made in the case of receptor 6, but this time two cathodic and two anodic waves are observed. Cyclic voltammograms of receptors 3 and 6 are shown in Figure 2. 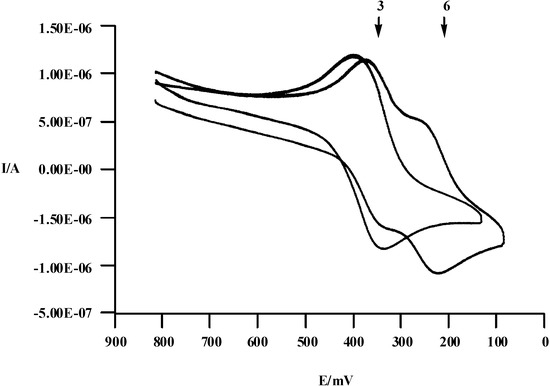 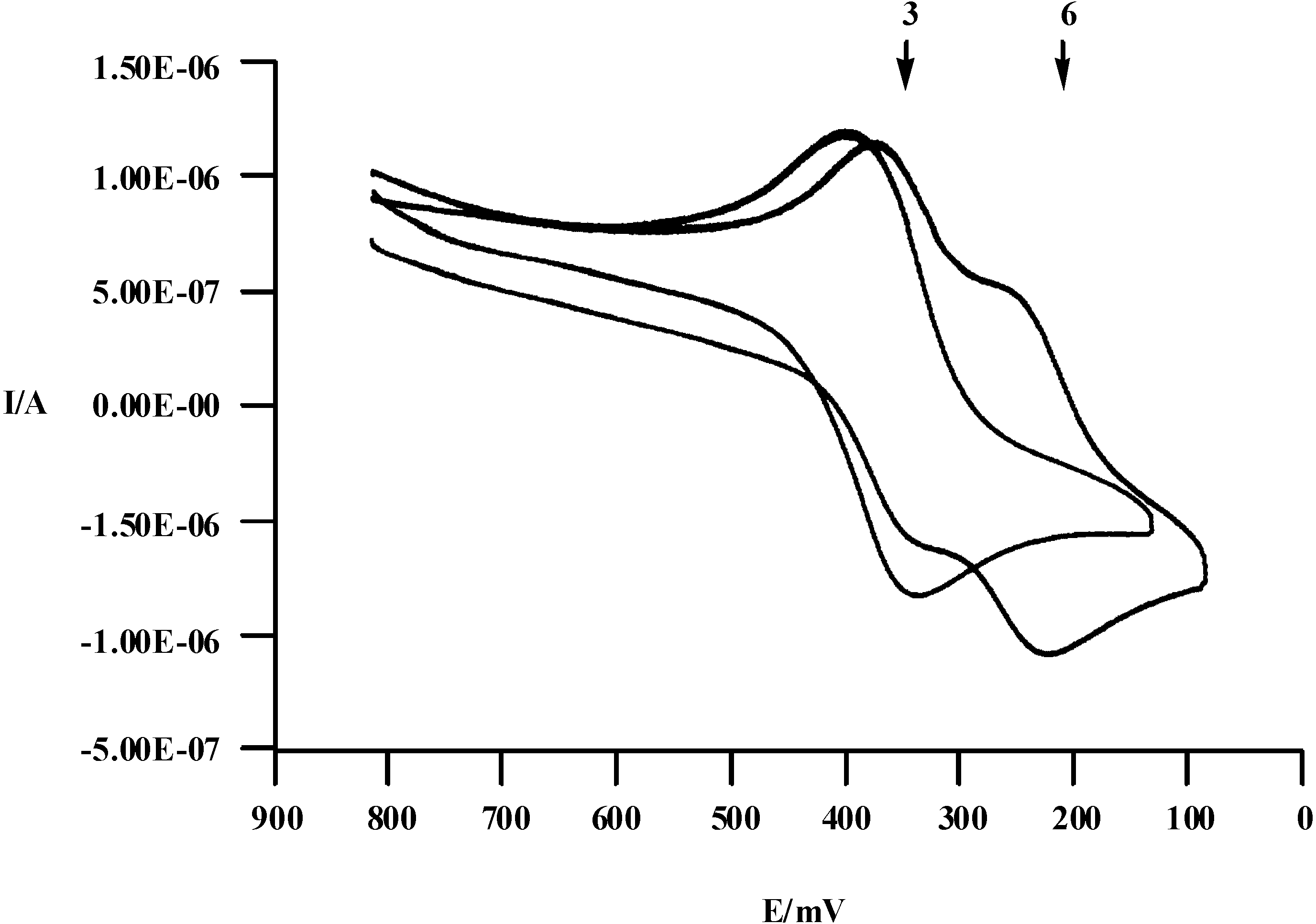 The ferrocene / ferrocenium redox couple was then examined upon addition of five equivalents of counter ion. The counter ion (Cl-, Br–, NO3–, HSO4–) was added in the form of its tetrabutyl ammonium salt. The results of the electrochemical analysis, Table 1, show that for the receptors 2-4 the oxidation potential is shifted anodically with increasing substituent size as would be expected.

Table 1. Electrochemical data for receptors 2-6.
aAnodic shifts upon 5 equivalents of anion added in the form of the tetrabutylammonium salt. bEpa and Epc represent the anodic and cathodic peak potentials and ipa and ipc represent the anodic and cathodic peak currents.
When five equivalents of a particular counter ion were added, the anodic wave was observed to shift to more negative potentials, excluding the bromide salt that gave an observed positive shift. In each case the largest negative shift was observed when five equivalents of the HSO4– ion were added, although this shift was always accompanied by a severe distortion of the anodic and cathodic waves. Furthermore the anodic peak current was drastically reduced and the cathodic peak current drastically increased. This phenomenon may be due to consumption of the receptor in a reduction reaction, possibly hydrogenation at the iron centre.

In summary, we have developed a rapid facile synthesis of ferrocenylimidazolium salts which proved to be excellent Lewis acids and act as anion receptors through C-H•••X- hydrogen bonding forming 1:2 stoichiometric complexes with Cl–, Br– and I– and 1:1 stoichiometric complexes with NO3- and HSO4-. The electrochemical data obtained for these novel receptors implies that they may be used as anion recognition molecules and possibly even as chemical or biochemical sensors. Further work will consist of the introduction of additional functionality in the ferrocenyl imidazole systems. We believe that these compounds might find uses in fields of research such as sensor materials, ligands for chiral catalysts, supramolecular photochemistry and electrochemistry, to name but a few.

N-alkyl imidazoles were purchased from Aldrich and MeCN was dried over 4Å molecular sieves. The structures of all new compounds were verified on the basis of spectroscopic and analytical evidence [10]. Cyclic voltammograms were obtained at a scan of 50 mVs-1 in MeCN solution containing 0.1 moldm-3 nBu4NBF4 as supporting electrolyte and 1x10-3 moldm-3 receptors at room temperature. Potentials were determined with reference to a Ag/Ag+ electrode with Pt working and auxiliary electrodes.

© 2002 by MDPI (http://www.mdpi.org). Reproduction is permitted for noncommercial purposes.