The Effect of Mechanical Wounding on the Composition of Essential Oil from Ocimum Minimum L. Leaves

Many plant-derived essential oils are known to exhibit antimicrobial activity against a wide range of bacteria and fungi [1,2]. Although they usually occur as complex mixtures their activity can generally be accounted for in terms of their major monoterpenoid components. Research into the antimicrobial actions of monoterpenes suggests that they diffuse into and damage cell membrane structures [3,4,5,6]. Monoterpenes are lipophilic and, by definition, will preferentially partition from an aqueous phase into membrane structures. Sikkema and co-workers have shown that this causes expansion of the membrane, increased fluidity or disordering of the membrane structure and inhibition of membrane-embedded enzymes [5].
The essential oil of Melaleuca alternifolia (tea tree oil) consists largely of cyclic monoterpenes of which about 50% are oxygenated and about 50% are hydrocarbons. It exhibits a broad-spectrum antimicrobial activity that can be principally attributed to terpinen-4-ol [7]. Here we use an investigation into the mode of action of tea tree oil as an example to illustrate how the membrane toxicity of monoterpenes affects microbial viability and cell membrane-related physiology.

The effects on different parameters were measured for the Gram negative (Escherichia coli AG 100) and Gram positive (Staphylococcus aureus NCTC 8325) bacteria and and a yeast (Candida albicans KEM H5) after exposure to 0.5% v/v tea tree oil (Figure 1). In each case measurements were taken after 60 minutes exposure, with the exception of respiration which was determined 2 minutes after tea tree oil addition in the case of E. coli and C. albicans and after 10 minutes for Staph. aureus. 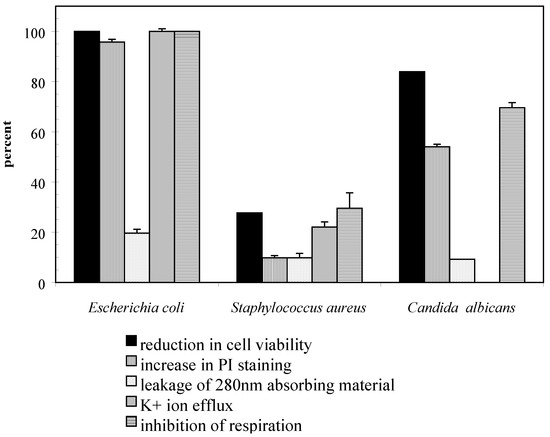 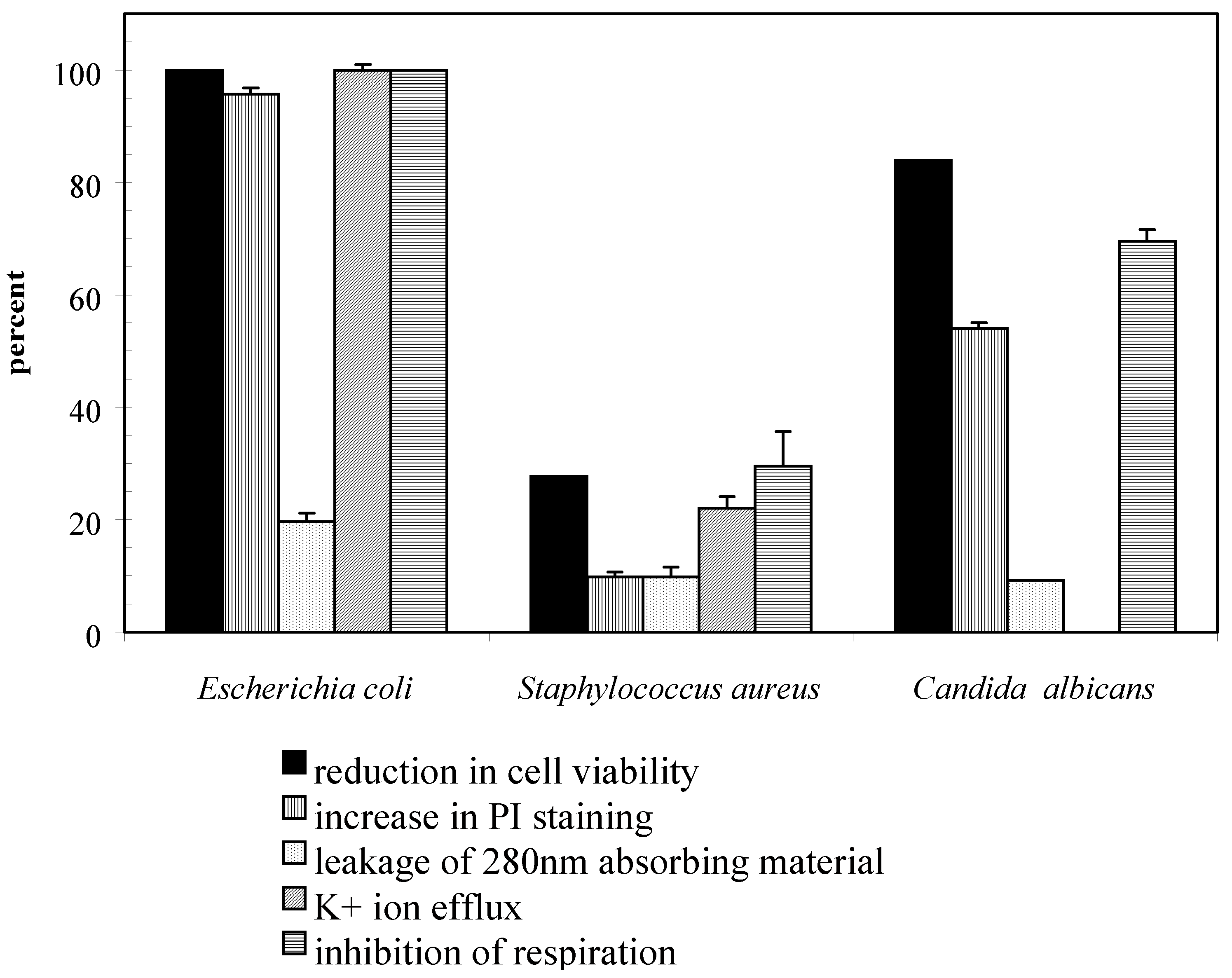 Cell viability counts reveal the extent to which treated cells are able to survive and reproduce to form colonies when removed from the presence of tea tree oil and re-cultured in a nutrient medium. E. coli and C. albicans cultures were more susceptible to tea tree oil than Staph. aureus during the 60 minute experiment (Figure 1). A significant inhibition of respiratory oxygen consumption in cultures of all three organisms resulted upon exposure to tea tree oil. The enzymes and cofactors directly involved in the respiratory electron transport chain span the cytoplasmic membranes of bacteria and the plasma and mitochondrial membranes of yeast. Therefore, the inhibitory effects of tea tree oil are consistent with effects related to the partitioning of its monoterpene components into cell membranes.
Increased propidium iodide (PI) staining and leakage of 280nm absorbing materials in all three microorganisms indicates that the decline in viability and the inhibition of respiration was accompanied by increased cell membrane permeability. PI is a fluorescent nucleic acid stain that is unable to penetrate the cell membrane structures of healthy cells [8]. However, cells with damaged or permeabilised cell membranes do not exclude PI. Therefore, PI staining of cells indicates cytoplasmic membrane (bacteria) and plasma membrane (yeast) damage. For E. coli the percentage of cells stained with PI after 60 minutes indicates that practically all non-viable cells had damaged cytoplasmic membranes. The fact that 100% of the total cellular free K+ content (the amount released from cells treated with cell-lytic enzymes) had leaked out to the supernatant confirms this observation. The amount of 280 nm absorbing material in E. coli cell supernatants (relative to the total released upon complete cell lysis) was less extensive than K+ ion leakage. This indicates that the membrane structural damage sustained by E. coli cells, although lethal, did not result in the release of macromolecular cytosolic constituents.
The bacterial cytoplasmic membrane provides a permeability barrier to the passage of small ions such as H+, K+, Na+ and Ca2+. This impermeability to small ions is maintained and even regulated by the structural and chemical composition of the membrane itself. Increases in the leakage of K+ will indicate a disruption of this permeability barrier. Maintaining ion homeostasis is integral to the maintenance of the energy status of the cell as well as membrane-coupled, energy-dependent processes such as solute transport, regulation of metabolism, control of turgor pressure and motility [9,10,11]. Therefore, even relatively slight changes to the structural integrity of cell membranes can detrimentally affect cell metabolism and lead to cell death.
In Staph. aureus cultures the percentage of PI permeable cells and 280 nm absorbing compounds released after tea tree oil exposure was similar. However, these values were significantly less than the percentage of non-viable cells. On the other hand, K+ efflux and therefore, the extent of cytoplasmic membrane damage closely followed the effect on cell viability. This suggests that, in the case of Staph. aureus, monitoring K+ efflux may be a more sensitive indicator of membrane damage than PI staining.
In the case of C. albicans, only 54% of cells were permeable to PI after exposure to tea tree oil in spite of an 84% reduction in viability. This indicates that for both C. albicans and Staph. aureus PI staining does not correlate completely with the onset of cell death. In spite of the increased permeability to PI and the rapid effect on respiration (69.6% inhibition within 2 minutes of adding tea tree oil), leakage of K+ from C. albicans cells exposed to tea tree oil was not detected. This absence of K+ efflux is difficult to explain, although it may be possible that the inhibition of respiration in some way causes the yeast plasma membrane to become permeable to the influx of PI while still maintaining a barrier to the efflux of K+. Regardless of the explanation, these findings suggest that monoterpene-induced cell membrane damage produces different effects in different microorganisms.

The ability of tea tree oil to inhibit respiration and increase membrane permeability in microbial cells suggests that its lethal actions are primarily the result of inhibition of membrane-located metabolic events and a loss of chemiosmotic control. Differences in susceptibility between E. coli, Staph. aureus and to some degree C. albicans can be explained by differences in the extent of monoterpene-induced cell membrane damage. However, in the case of C. albicans the absence of tea tree oil stimulated K+ efflux and the presence of non-viable cells with plasma membranes that remained impermeable to PI indicates that the nature of membrane damage sustained may vary from that observed with bacteria.

© 2001 by MDPI (http://www.mdpi.org). Reproduction is permitted for noncommercial purposes.