During the last few decades, various techniques, including atomic absorption spectroscopy (AAS) [1,2], inductively coupled plasma optical emission spectroscopy (ICP-OES) [3], inductively coupled plasma mass spectroscopy (ICP-MS) [4], and X-ray fluorescence [5], have been utilized for the quantitative analysis of the material. Of all these techniques, laser-induced breakdown spectroscopy (LIBS) has been proven to be an emerging, simple, well-established, robust, reliable, and cost-effective technique for elemental analysis [6,7,8,9,10,11]. The LIBS technique has many potential applications in the field of geology [12,13], industry [14], medical [15], and environmental studies [16]. In LIBS, an emission spectrum of the target material is recorded by focusing a laser beam on the surface of a target sample, which generates plasma on the surface in the form of free electrons, ions, and neutral atoms [17,18]. The plasma contains all the compositional elements present in the sample. Due to the hot nature of plasma, excitation and de-excitation processes happen within the plasma, which yields spectral lines that provide qualitative and quantitative information about the sample. In recent years, the LIBS technique has been used for the analysis of nanomaterials [19], thin-film analysis [20,21,22], and the identification of elements in semiconductor materials [23,24,25]. AlGaAs is an important crystalline solid used as a semiconductor material, which has potential photo-optic practical applications. In addition, AlGaAs is used as a barrier material in GaAs-based diode lasers. The performance and efficacy of AlGaAs-based diode lasers have a strong dependence on the precise percentage of doping of semiconductor materials, including Al, Ga and As. Hence, it is crucial to have precise knowledge of the required concentration of elements present in the semiconductor materials to acquire the desired efficiency and better applications [26].
Here, we present the qualitative and quantitative analysis of an AlGaAs-based semiconductor material using the CF-LIBS technique, and the results were compared with results reported by the manufacturer. Three different samples with various concentrations of Al, Ga, and As were chosen, and a compositional analysis was performed using the CF-LIBS technique. Elements present in the sample, including Ga, As and Al, were identified from the spectral lines present in the recorded emission spectra of the AlGaAs sample. The electron temperatures of Ga, As, and Al were calculated using the Boltzmann plot method, while the number density was calculated using the Stark-broadened line profile method. The average electron temperature and electron number density were used for quantitative analysis of the target sample. The elemental concentration, in terms of weight percentage, was calculated using the CF-LIBS technique and the results were compared with those reported by the manufacturer. The measured concentration by CF-LIBS showed good agreement with the certified values reported by the manufacturer.

The LIBS experimental setup used to investigate the compositional analysis of the sample has been explained elsewhere [7,8,9,10,11]. A schematic diagram of the LIBS arrangement used for the study of the AlGaAs sample is shown in Figure 1. In brief, the LIBS system contains a pulsed Nd: YAG laser (Brilliant-B, Quantel, Lannion, France), which emits at 532 nm wavelength, operates at 10 Hz repetition rate with 5 ns pulse duration, and is capable of delivering about 200 mJ of pulse energy. The laser beam, having a pulse energy of about 118 mJ, was focused onto the surface of the target sample, which was positioned in air at atmospheric pressure using a quartz lens of 10 cm focal length. The AlGaAs sample was placed on a rotating stage to enable a clean surface for every laser shot. The optical emission was recorded using an optical fiber attached to a spectrometer equipped with charged coupled devices (CCDs) that range from 200 nm to 720 nm wavelengths. Ten laser shots were used to clean the sample surface. The optical emission spectra were accomplished at an average of 20 laser shots at distinct spots on the surface of the sample. The averaged optical emission spectrum was then utilized to acquire the chemical composition of the AlGaAs sample, which takes into account the sample inhomogeneity and lowers the statistical errors.

Gallium arsenide (GaAs) belongs to the III–V group of semiconductor elements. GaAs has many unique qualities, such as low electronic effective mass, high electron mobility, and high-saturation drift velocity. GaAs is used in various devices, such as optoelectronics and microelectronics. Therefore, for the past couple of years, excellent studies have been conducted to investigate the chemical and physical properties of its nanostructure [27]. In the present work, to study the optical emission spectrum of AlGaAs, we used three standard certified AlGaAs samples with varying concentrations of Al, Ga and As. The details of the AlGaAs-certified samples are presented in Table 1.

We recorded the emission spectrum of the AlGaAs samples under identical LIBS conditions; however, a comprehensive study has been conducted for sample-1. In Figure 2, we present the time-integrated emission spectrum of AlGaAs for sample-1, and the characteristic emission lines of Ga (I), As (I), and Al (I) are marked. In this spectral region, the dominant emission lines are attached to singly ionized gallium (Ga I) at 403.30 nm due to 4s25s 2S1/2→3d104s24p 2P1/2 transition, and 417.20 nm due to 4s25s 2S1/2→3d104s24p 2P3/2 transition, followed by singly ionized arsenide (As I) and singly ionized aluminum (Al I) lines. The identification of the spectral lines belonging to various elements was accomplished using the National Institute of Standard and Technology (NIST) database [28]. The detected major and minor emission lines of sample-1, along with their wavelengths, transition configuration, transition probabilities, and upper level energies, are presented in Table 2. These optical emission lines are used to estimate the concentrations of the elements Ga, As, and Al. For the quantitative analysis of the AlGaAs samples, plasma parameters, such as plasma temperature and electron number density, were calculated by assuming that the plasma is optically thin and in local thermodynamic equilibrium (LTE).

To investigate the laser-produced plasma of the AlGaAs sample, certain conditions should be satisfied, including optically thin plasma and local thermodynamic equilibrium (LTE) conditions. To validate the above assumptions, it is essential to evaluate the plasma temperature (Te) and electron density (Ne). Several methods and techniques for determining the plasma temperature and number density have been utilized in previous LIBS studies [18,29,30]. However, in the present work, we used the Boltzmann plot method for measuring the plasma temperature. By assuming that the plasma population is obeying the Boltzmann distribution, we used the following Boltzmann equation to construct the Boltzmann plots [31,32]: where Iij is the spectral line intensity of the transition j→i, is the transition wavelength, h is the Planks constant, A is the transition probability, is the statistical weight of the upper level, c is the velocity of light, is the energy of the upper level, is the Boltzmann constant, Te is the excitation temperature, is the total number density, and is the partition function. To draw the Boltzmann plot, we have selected the optically thin emission lines of Ga I, As I, and Al I that are free from self-absorption and also follow the local thermodynamical equilibrium (LTE). The constructed Boltzmann plots for Ga I, As I, and Al I are presented in Figure 3, displaying excellent linearity (R2~0.999). The plasma temperatures have been obtained from the slopes (1/kTe) of the linear fit. The calculated plasma temperatures for Ga, As, and Al are (5730 ± 500 K), (5675 ± 500 K), and (5827 ± 500 K), respectively. The selected emission lines and their atomic parameters were taken from the NIST database and are listed in Table 2. The errors in the calculated plasma temperatures mainly come from the uncertainties present in the reported transition probabilities and the measurement of the line intensities. For the quantitative analysis, we have used a mean value of the plasma temperature, (5744 ± 500 K).
To validate the conditions of being optically thin and free from self-absorption, we used the intensity ratio method in the present study [18,30,33]. For instance, upper-level energies were used to lower the temperature dependency. The intensity ratios of the experimentally observed spectral lines and values calculated from the atomic parameters (NIST database 2022 [28]) are quite compatible (error <10%). Thus, the plasma satisfies the condition of being optically thin.

McWhirter’s criterion is used to check the lower limit of the electron number density for the plasma to be in local thermodynamic equilibrium (LTE) [31,36,37]. where is the highest energy transition between the upper and lower levels, and is the plasma excitation temperature. In this work, for Ga I and . The calculated electron number density using this relation is at the order of ~. This value of the number density is much lower than that of ( determined from the Stark-broadened line profile of Ga I line at 417.20 nm. Therefore, it can be concluded that the plasma is satisfying the LTE condition.

4.5. Laser Irradiance and Spatial Dependence on the Plasma Parameters 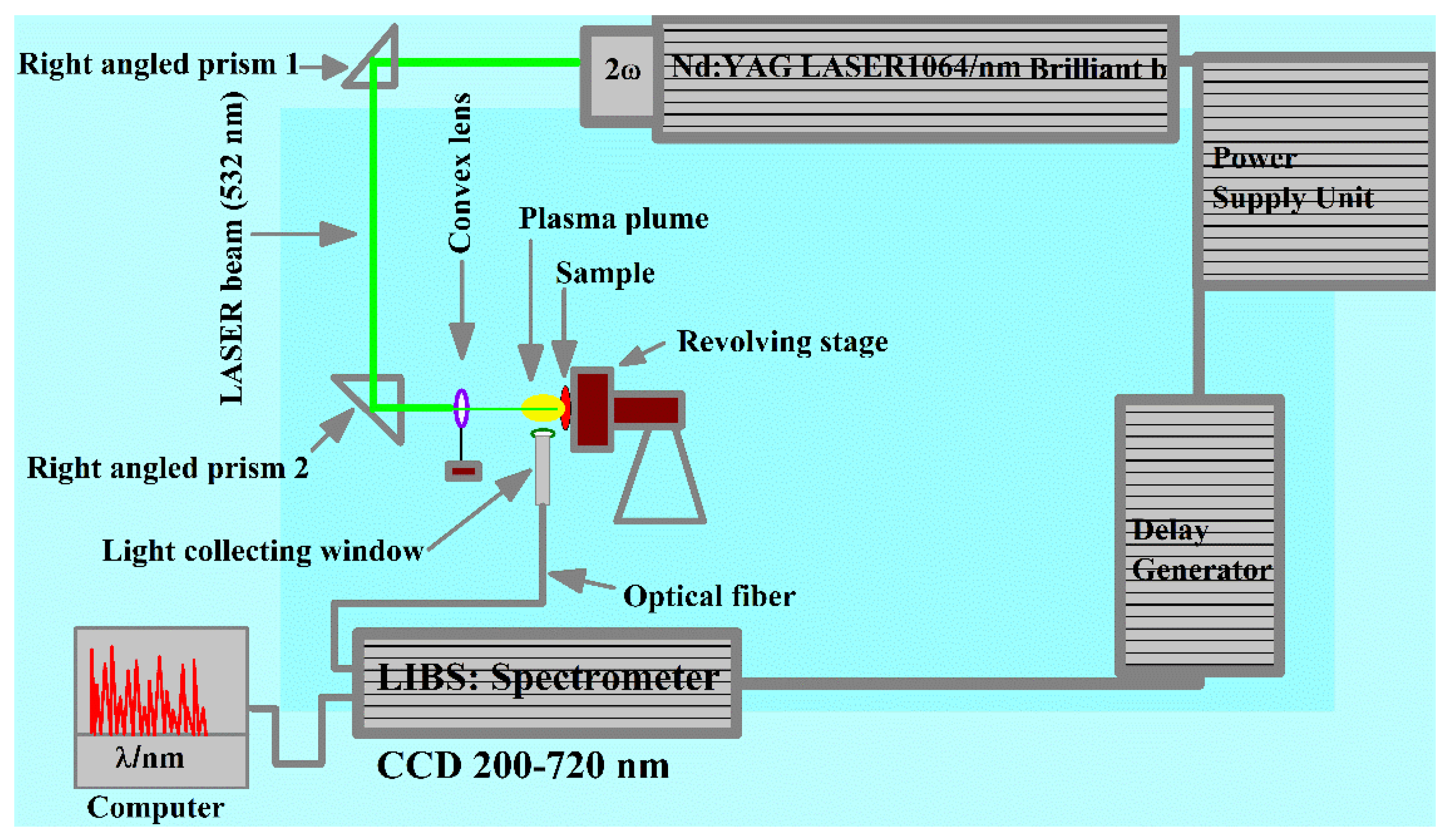 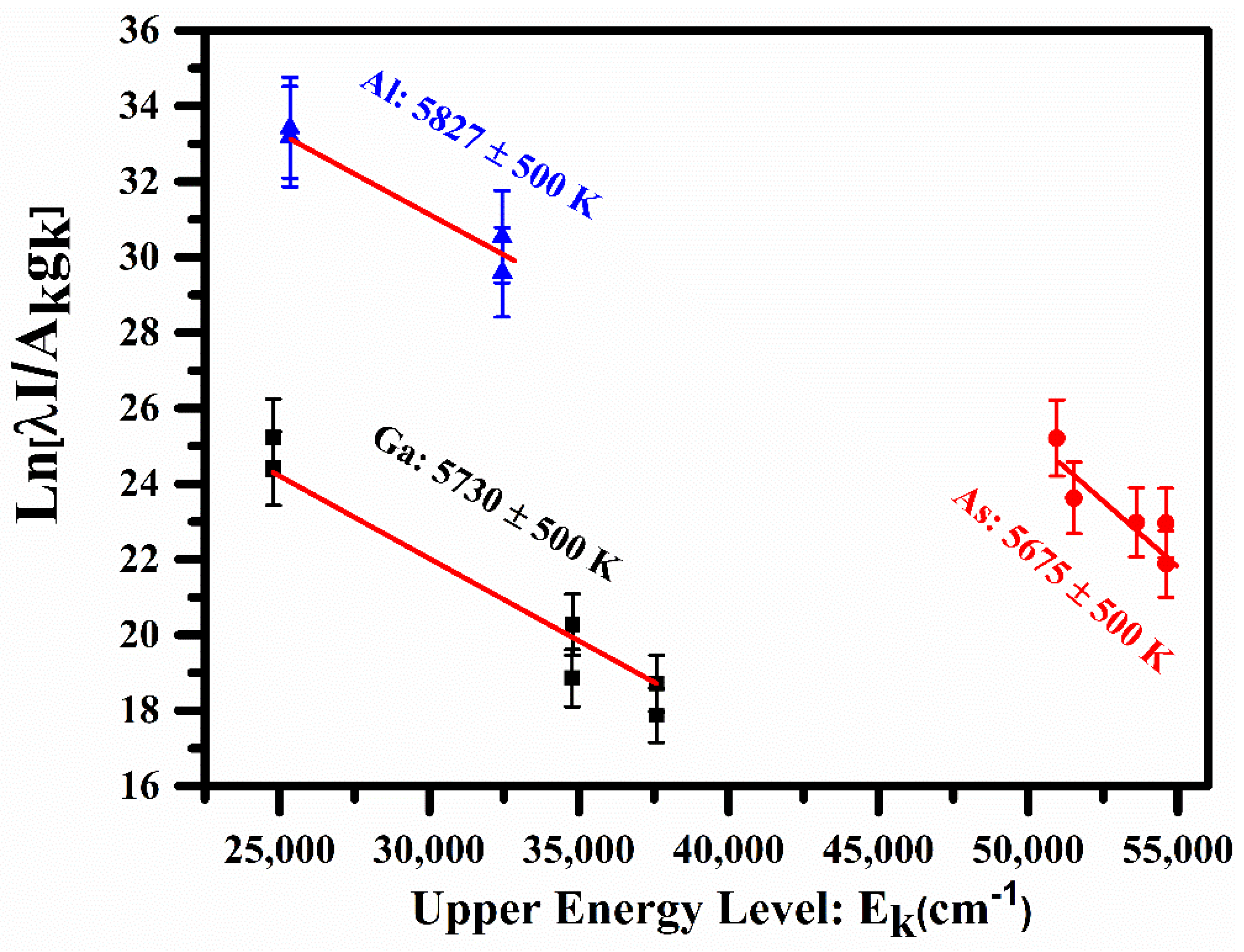 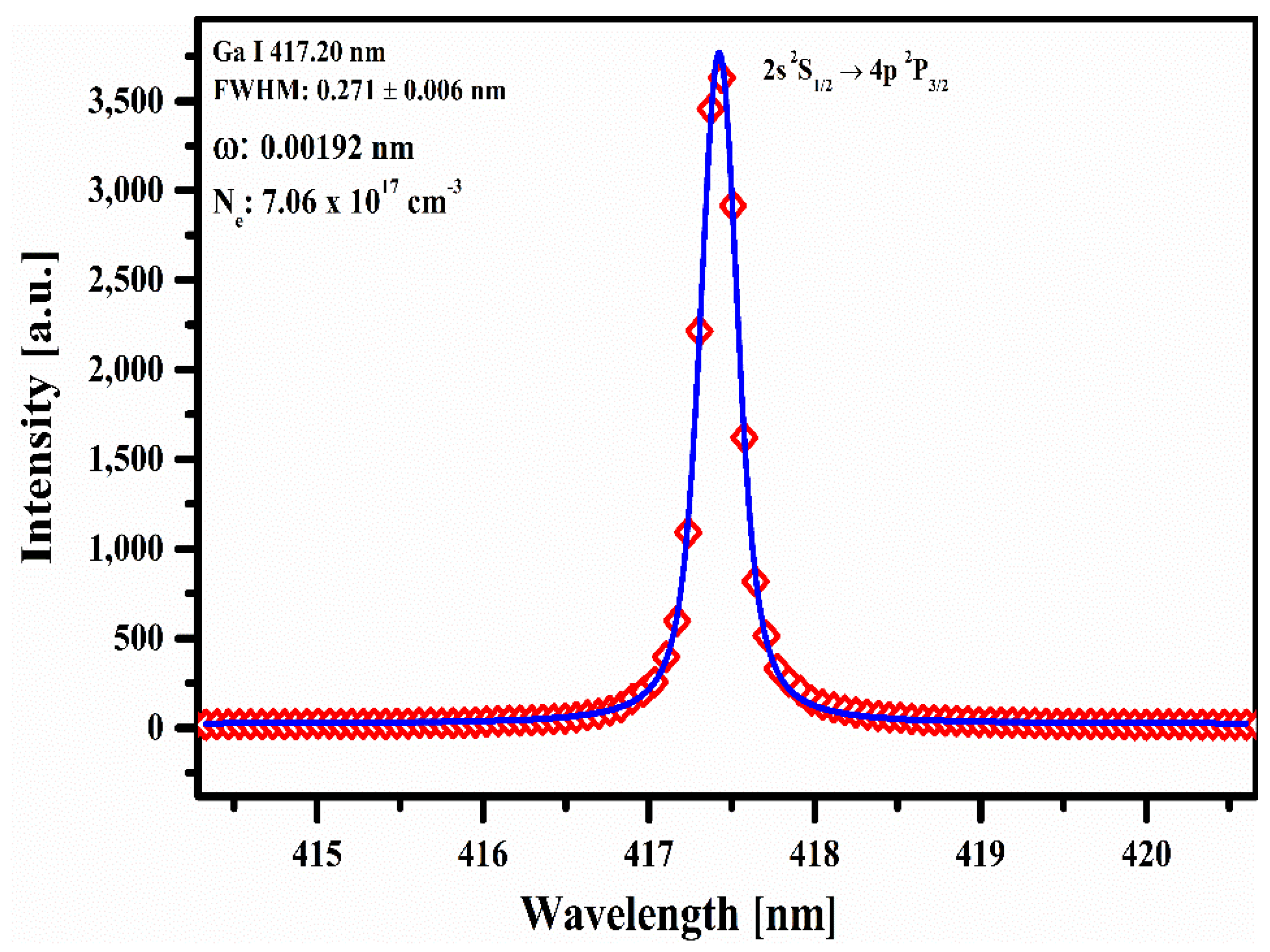 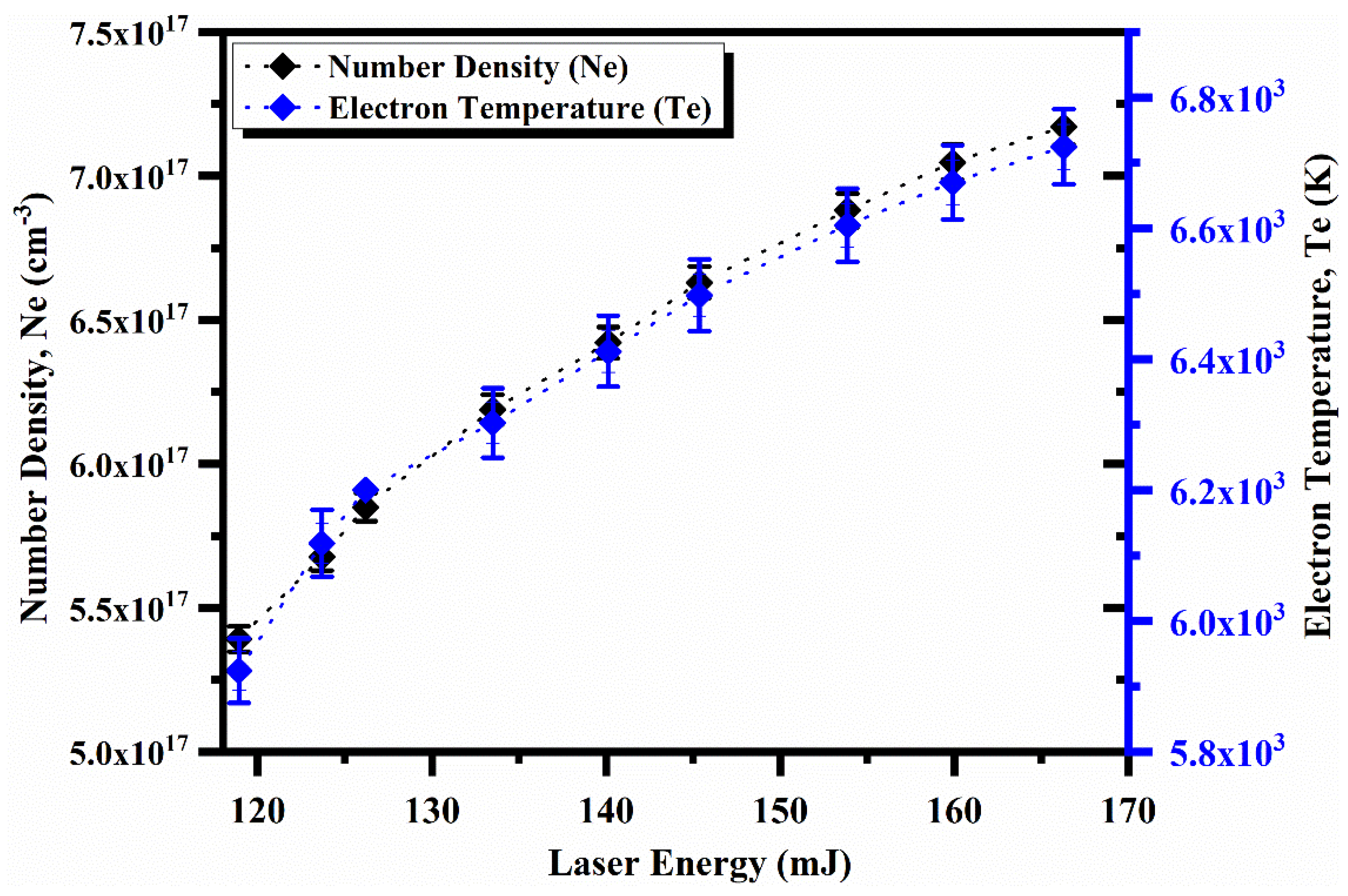 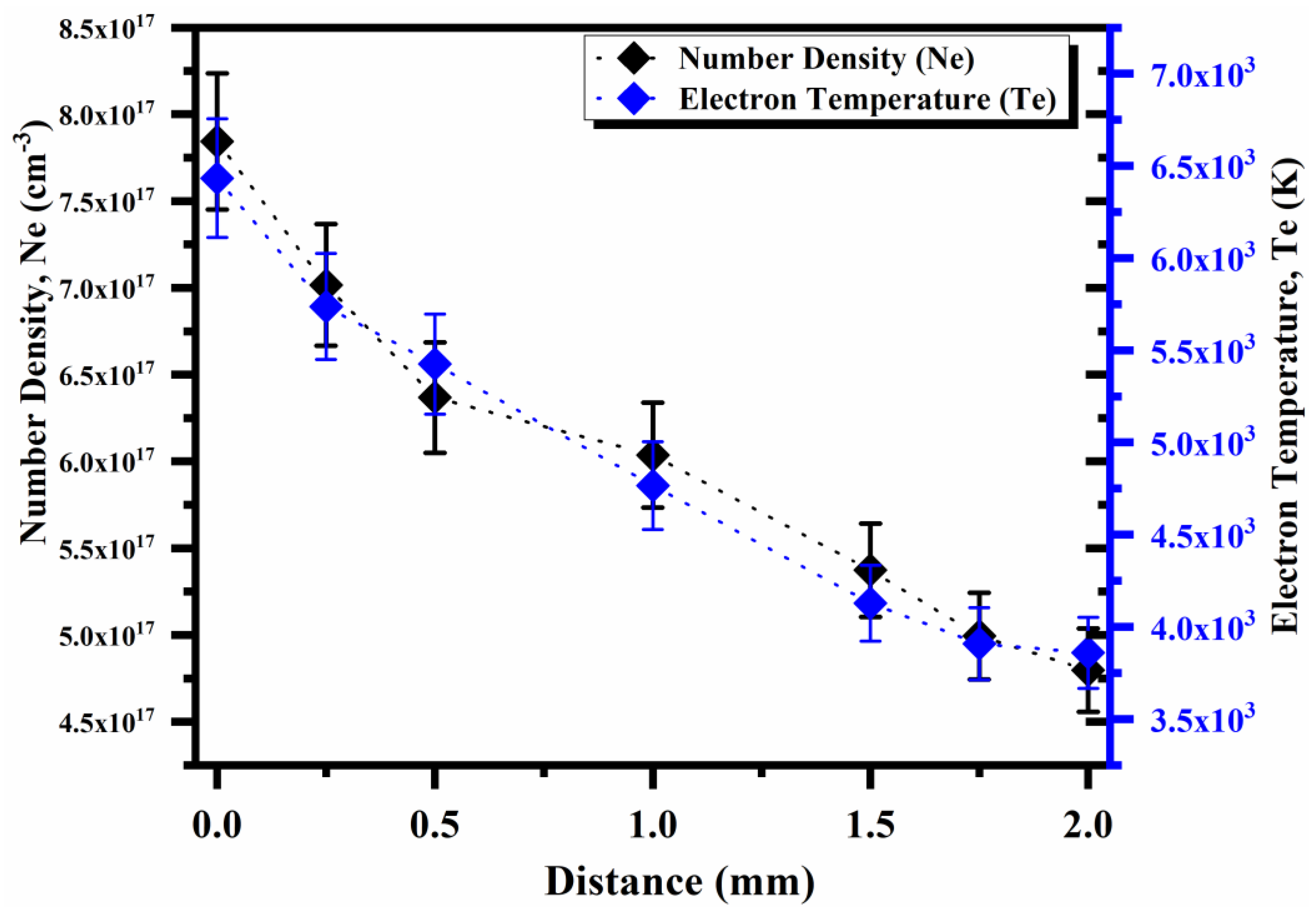 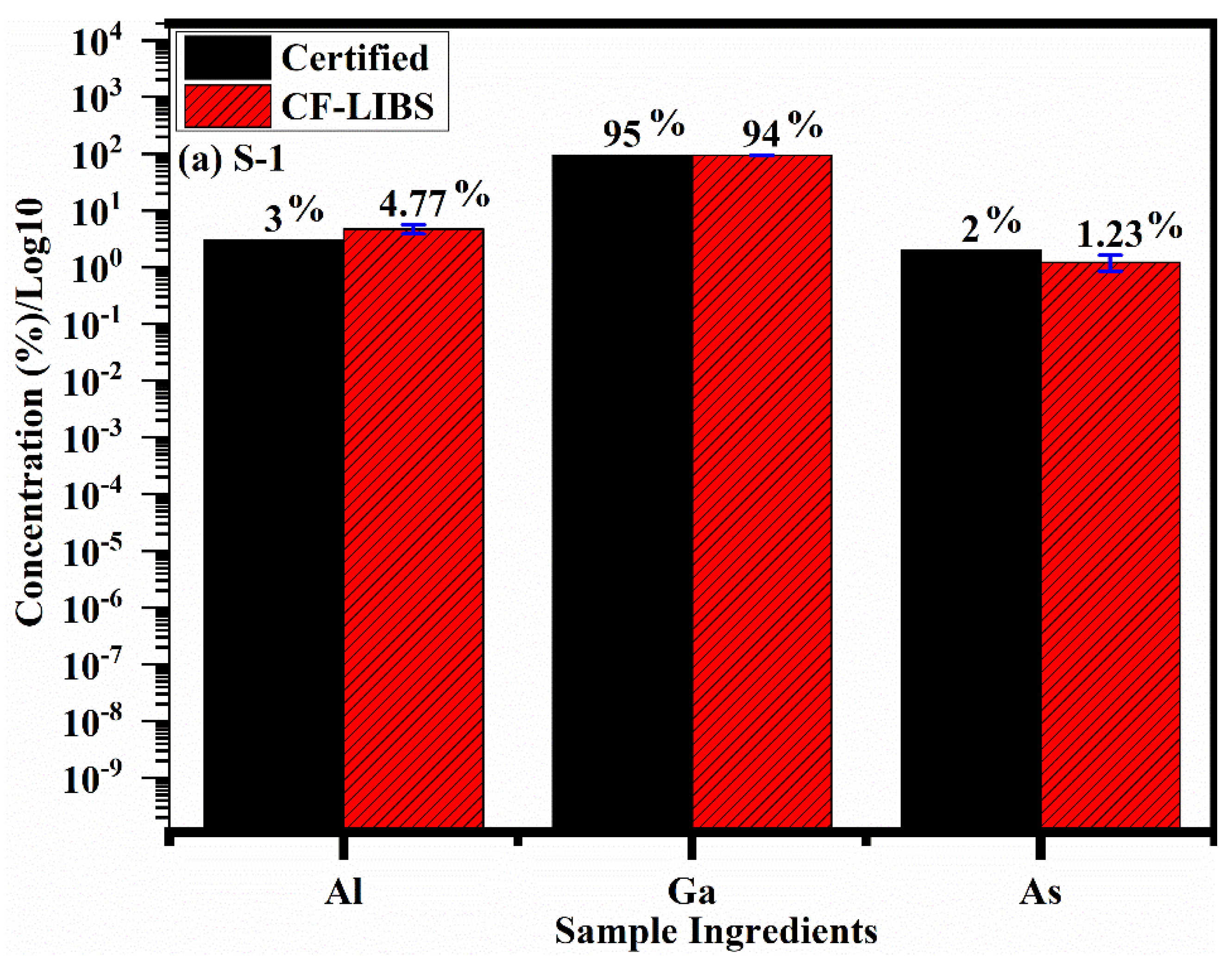 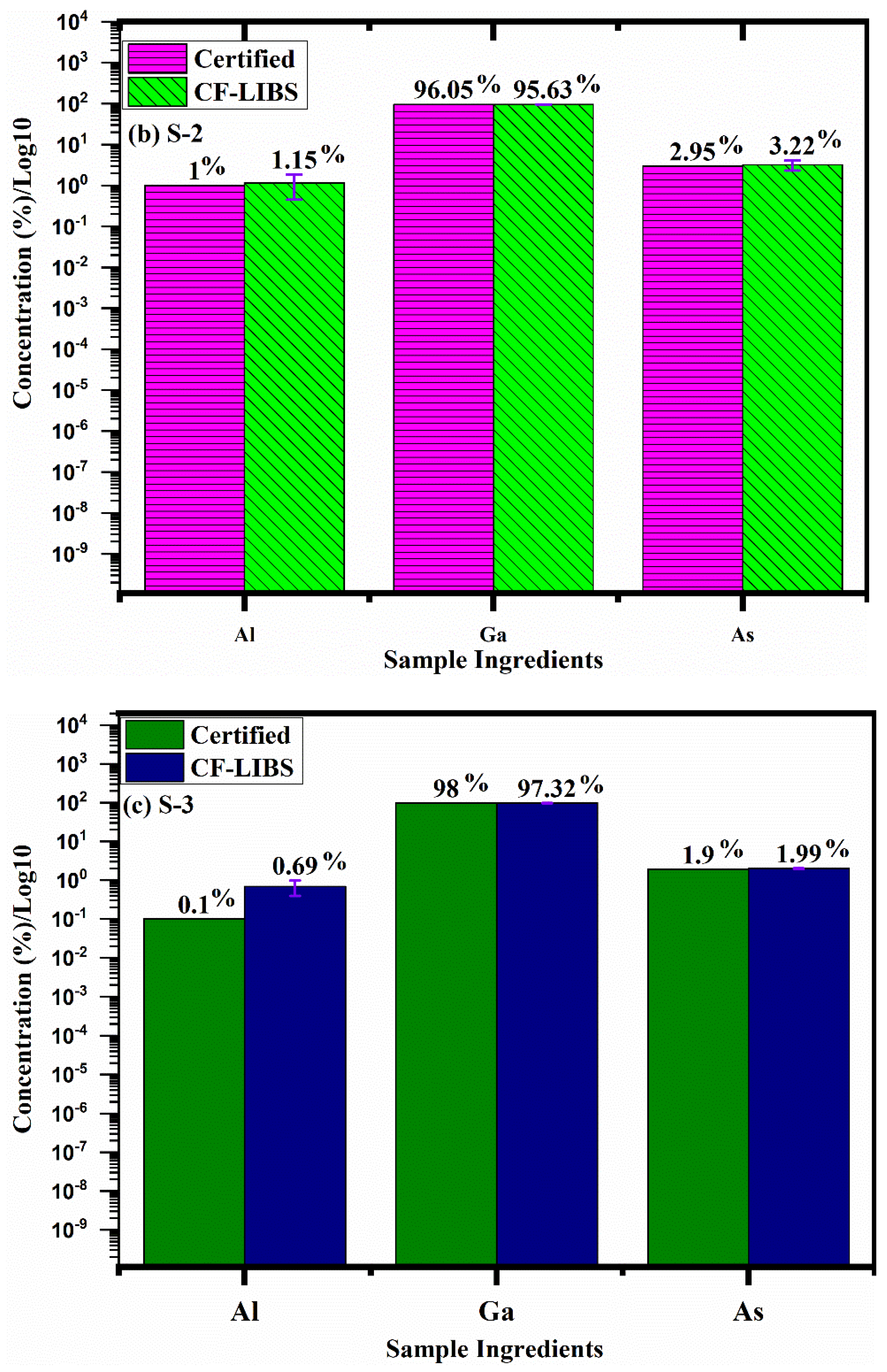