Xanthurenic Acid in the Shell Purple Patterns of Crassostrea gigas: First Evidence of an Ommochrome Metabolite in a Mollusk Shell
Next Article in Special Issue

The use of biological indicators of environmental quality is an alternative method of monitoring ecosystem pollution. Various groups of contaminants, including organic ones, can be measured in environmental samples. Polycyclic aromatic hydrocarbons (PAHs) have not yet been determined by the moss bag technique. This technique uses several moss species simultaneously in urban areas to select the best biomonitoring of these compounds, which are dangerous to humans and the environment. In this research, a gas chromatography coupled with mass spectrometry was used for the determination of selected PAHs in three species of mosses: Pleurozium schreberi, Sphagnum fallax and Dicranum polysetum (active biomonitoring) and for comparison using an air filter reference method for atmospheric aerosol monitoring. The chlorophyll fluorescence of photosystem II (PSII) was also measured to assess changes in moss viability during the study. As a result of the study, the selective accumulation of selected PAHs by mosses was found, with Pleurozium schreberi being the best bioindicator—9 out of 13 PAHs compounds were determined in this species. The photosynthetic yield of photosystem (II) decreased by 81% during the exposure time. The relationship between PAHs concentrations in mosses and the total suspended particles (TSP) on the filter indicated the possibility of using this bioindicator to trace PAHs in urban areas and to apply the moss bag technique as a method supporting classical instrumental air monitoring. View Full-Text
Keywords: polycyclic aromatic hydrocarbons; bioindicator; moss bag technique polycyclic aromatic hydrocarbons; bioindicator; moss bag technique
►▼ Show Figures 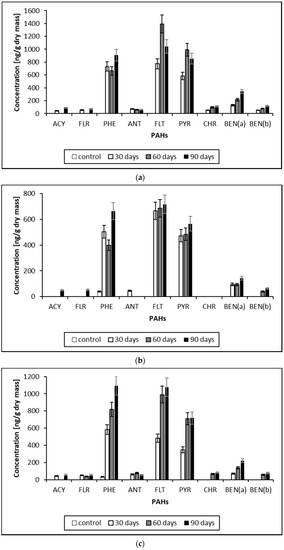