Elderberry is a plant species of the Adoxaceae family. Formerly it was also included in the Sambucaceae and Caprifoliaceae families [1,2]. Currently there are about 20 intraspecific taxa of elderberry around the world. The varieties growing in forests and parks are predominant, but there are also cultivars grown for industrial purposes [3,4,5,6,7].
Elderberry fruits (Sambuci fructus) are spherical drupes, occurring in the form of corymbs with several dozen pieces inside. Their color depends on the stage of ripeness. In the beginning the fruit is green, but when it is fully ripe, it is black and violet [7,8,9]. Due to the health-promoting properties of elderberry fruits, which result from their rich chemical composition, this raw material is widely used in herbal medicine and the food industry.
The chemical composition of elderberry fruits depends on various factors, including the cultivar, environmental conditions (light, temperature, amount, and frequency of rainfall, fertilization, cultivation methods), the processing method and storage conditions. Ripe elderberry fruits contain carbohydrates, including dietary fiber, mainly hemicelluloses and polygalacturonic acid, pectins, and simple sugars [10,11]. Elderberries contain small amounts (2.7–2.9%) of protein, including seven exogenous amino acids [12,13]. They are also rich in fatty acids, mainly linoleic acid, linolenic acid, and oleic acid [11,14]. Elderberry fruits are a source of tannins and organic acids, including malic, acetic, valeric, tartaric, shikimic, and benzoic acids [15,16]. Apart from that, elderberry fruits contain 0.01% of essential oil, which is composed of over 30 different compounds, including phenyl aldehydes (3–25.8% of the oil composition) and furfural (18%) [17,18]. Elderberry fruits are also a source of minerals [19,20,21,22], considerably diversified amounts of vitamin C: 6–25 mg/100 g [23], 18–36 mg/100 g [21], 18–26 mg/100 g [24], 6–44 mg/100 g [19,20], and even 132.1 mg/100 g [17], as well as a wide range of B vitamins: B2–65 mg/100 g; B7–17 mg/100 g, B9–1.8 mg/100 g [21,24] and vitamin A (600 IU/100 g) [21].
The antioxidative properties of elderberries are mostly determined by anthocyanins, which are a large group of bioactive compounds (cyanidin-3-glucoside: 65.7% of all anthocyanins) [25,26], as well as flavonoids, flavonols, and phenolic acids.
According to reference publications, there are significant differences between the profile of bioactive compounds in the fruits of cultivated and wild plants [27]. Currently Poland is a country with the best-documented tradition of picking wild edible plants [28,29]. The progressive nutritional trends oriented to traditional functional food have sparked intensified research on wild edible plants [30,31]. The health-promoting and healing properties of elderberry products and preparations were the basis of this study. So far, the antimicrobial activity of ethanol-aqueous extracts from freeze-dried elderberry concentrates has been investigated on 13 nosocomial pathogens, including Staphylococcus aurens, Bacillus cereus, Salmonella poona, and Pseudomonas aeruginosa [32]. However, currently the most important direction of research is the compounds contained in elderberry fruit products, which exhibit antiviral activity, especially against group A (KAN-1 HSNI) and B viruses (B/Mass) [33,34].
Literature data reported that extracts of black elder flowers as well fruits inhibited Gram-positive (S. aureus, B. cereus) and Gram-negative bacteria (S. poona, P. aeruginosa). Flavonons, flavonols dihydroflavonols presentin fruts, and flowers of black elder may be responsible for their antimicrobial properties. Furthermore, they can contain lecithin, peptides, and oligosaccharides which are inhibitors of transcription and metabolism of the bacterial cells [32].
This study was conducted on extracts of bioactive compounds from freeze-dried elderberry fruits growing wild in Poland. The extracts were obtained with an original method described in detail in the Materials and Methods section.
The aim of this study was to assess the antimicrobial activity of aqueous solutions of wild elderberry extracts obtained by double hydrolysis. The results of the microbiological and chemical analyses of the composition of the extracts were analyzed statistically to indicate the bioactive compounds of the greatest antimicrobial significance. Interdisciplinary research was conducted to find interrelations between the factors under analysis and to better understand the antimicrobial activity of elderberry extracts.

The research was conducted on 500 g of wild elderberry fruits (Sambucus nigra L.) harvested in Poland in August and September 2019. The fruits were harvested in 36 places of their natural occurrence, which were marked with numbers in further part of this article. The fruits were harvested when they were fully ripe. After the harvest they were frozen and freeze-dried (temperature −53 °C, pressure 0.025 mbar). After drying the fruits were subjected to the extraction process.
The extracts were obtained with an innovative method of double hydrolysis (acidic and alkaline) and extraction of bioactive compounds, which were released from glycosidic bonds with diethyl ether. After evaporation the dry extracts were dissolved in deionized water and used in microbiological tests.
The extracts were tested for the minimum inhibitory concentration (MIC) against 7 bacterial strains and analyzed chemically to determine the content of phenolic compounds, pigments and antioxidative properties in a test with the ABTS+ radical.

The analysis was performed using an Acquity H class UPLC system equipped with a Waters Acquity PDA detector (Milford, MA, USA). The chromatographic separation was performed on an Acquity UPLC® BEH C18 column (Watersy, Dublin, Ireland) (100 mm × 2.1 mm, particle size 1.7 µm) (Watersy, Dublin, Ireland). The elution was carried out in a gradient using the following mobile phase composition: A: acetonitrile with 0.1% formic acid, B: 1% aqueous formic acid mixture (pH = 2). The concentrations of phenolic compounds were determined with the use of an internal standard at wavelengths λ = 320 nm and 280 nm and finally given in mg/1 g of extract. Compounds were identified by comparing the retention time of the analyzed peak with the standard retention time and by adding a specific amount of standard to the analyzed samples and repeating the analysis. The detection level was 1 µg/g.

The total phenolic content was measured with the Folin-Ciocalteu reagent [80,81], 2 mL of the Folin-Ciocalteau reagent was added to 1 mL of the aqueous extract. After 3 min the reaction environment was alkalised by adding 10 mL of a 10% sodium carbonate solution. After 30 min the solutions were filled up to 25 mL and their absorbance was measured at a wavelength of λ = 765 nm, using a Hitachi U-2900 spectrophotometer (Schaumburg, IL, USA). The results were calculated as the mean of triplicates, in mg phenolic compounds per gram of raw material expressed as gallic acid equivalent (GAE).

The plant material was thoroughly ground in a mortar containing 3 mL of ethanol, a pinch of sand and a pinch of CaCO3. The solution was quantified into labelled centrifuge tubes. The mortar and pestle were rinsed with another 2 mL of alcohol, which was poured into the same centrifuge tubes. The tubes with the chlorophyll alcohol solution were capped and kept in a dark place until centrifugation. The samples were centrifuged at 9000 rpm for 10 min at room temperature. Next, the supernatant was quantitatively transferred into new labelled centrifuge tubes. Then, 1.9 mL of ethyl alcohol and 0.5 mL of the sample under analysis were poured into spectrophotometer cuvettes. The contents were mixed, and the chlorophyll content was determined with a UV/VIS Excellence 6850 spectrophotometer at wavelengths of: 645 nm, 649 nm, 654 nm, and 665 nm. The apparatus was zeroed at the specified wavelength on 2 mL of ethanol. All the measurements were triplicated. The formula below was used to calculate the content of chlorophyll a and b:
Chlorophyll (a + b) = [(25.1 × A654) × (V: (1000 × W))] × 4 [mg g−1 fresh weight]
where:
A 645-665—absorbance measured at a wavelength of 649–665 nm,
V—total volume of the extract (mL),
W—weight of the sample (g) [82].

The total anthocyanin content was measured with the spectrophotometric method described by Giusti and Wrolstad [80]. The results of the measurements were expressed as cyanidin-3-glucoside (C3G). 2 g of the product was collected and homogenized for 3 min (20,000 rpm) with 100 cm3 of a mixture of methanol and 1.5-molar hydrochloric acid (85:15). The homogenate was centrifuged for 20 min at 4000 rpm. A clear liquid was collected for analysis. The other products were diluted with buffers so as to make a spectrophotometric measurement within an absorbance range of 0.3–0.8. Depending on the sample, the dilution factor (DF) ranged from 12.5 to 20. All the measurements were triplicated with the UV VIS Excellence 6850 spectrophotometer [83,84,85].

Determination of the total carotenoids and β-carotene content was carried out in accordance with the Polish standard [86].

The minimum concentrations of the elderberry fruit extracts inhibiting (MIC) the growth of Escherichia coli (PCM 2793), Salmonella enteritidis (PCM 2548), Proteus mirabilis (PCM 1361), Pseudomonas fluorescens (PCM 2123), Pseudomonas fragii (PCM 1856), Listeria innocua (DSM 20649), and Micrococcus luteus (PCM 525) were measured with a Bioscreen C automated growth reader (Oy Growth Curves Ab Ltd.,TURKU, Finland). Bacterial inoculants and a series of diluted hydrated extracts were placed on a plate and incubated for 72 h under adequate conditions for individual groups of bacteria. The apparatus measured the optical density (OD) in each cuvette. The first concentration without turbidity was considered the MIC value, i.e., the minimum concentration at which the microorganisms used in the study were inactivated during 72-h incubation.

Statistical analyses and models were based on discriminant analysis. The analyses showed which of the variables – pigments, sugars, organic acids, or polyphenols, may affect the activity of pathogenic and food-spoilage microorganisms. The model was constructed using canonical variate analysis (CVA)—the canonical variation of Fisher’s linear discriminant analysis (LDA) [87]. Detrended correspondence analysis (DCA) was used as an indirect method to prepare a diagram, ordering the samples under analysis. The borderline significance level was determined with the Monte Carlo permutation test (number of permutations: 9.999). The Canoco for Windows package and the Microsoft Excel spreadsheet was the software (Canoco 5) (accessed 3 October 2019) used for all comparisons, calculations, and graphic elements. The following tools from Canoco for Windows were used: Canoco for Windows 4.5, CanoDraw for Windows, and WcanoIMP.

The research showed that the content of phenolic acids and flavonoids in the extracts determined their antibacterial activity. Of the compounds under analysis, apigenin, kaempferol and ferulic, protocatechuic, and p-coumarin acids had the greatest influence on the high antibacterial activity of elderberry extracts. The statistical analyses did not show any significant influence of the location on the profile of bioactive compounds in the extracts. The extraction method presented in the study made it possible to obtain preparations containing free compounds with antioxidative and antibacterial properties. This method can facilitate the standardization of wild elderberry preparations. 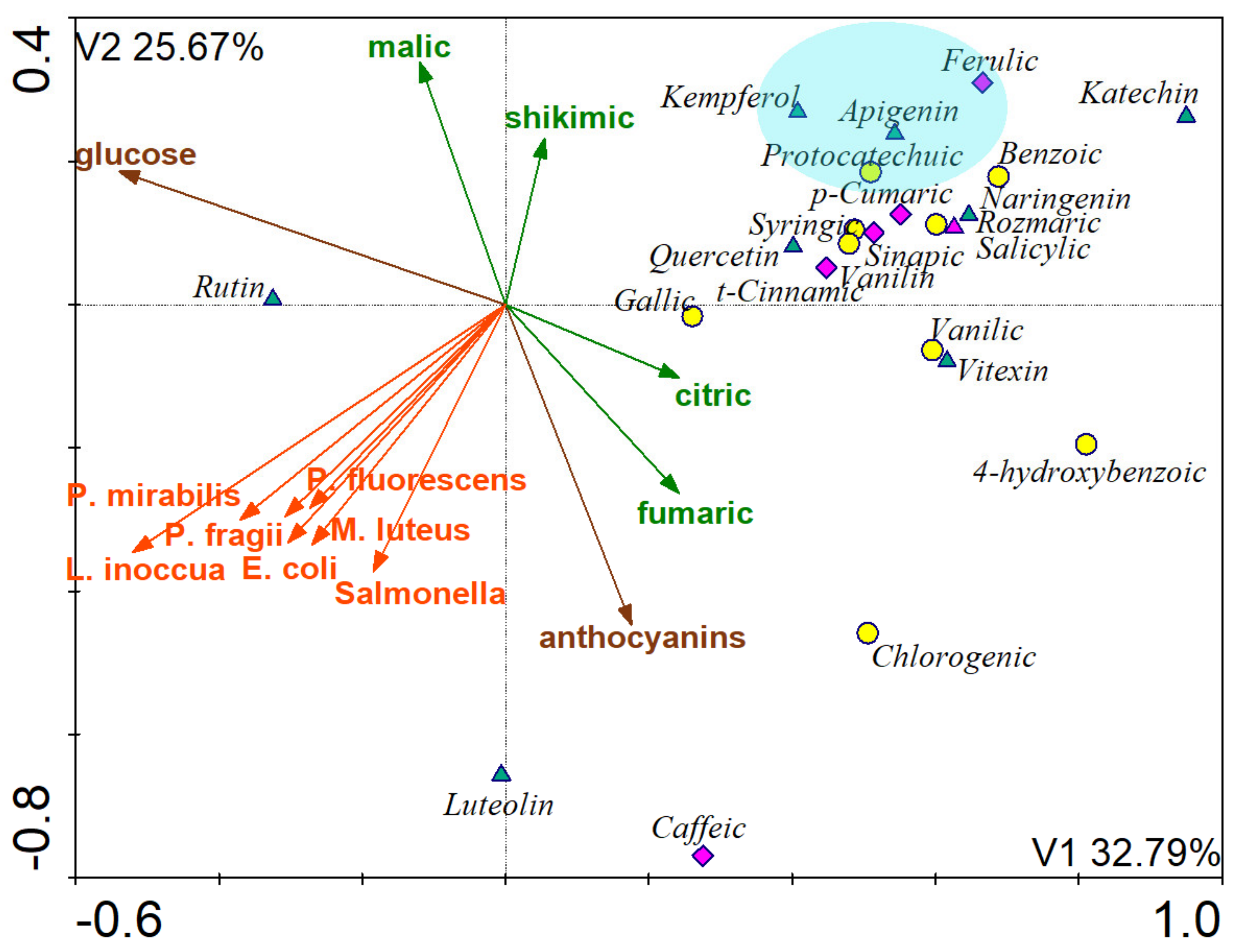 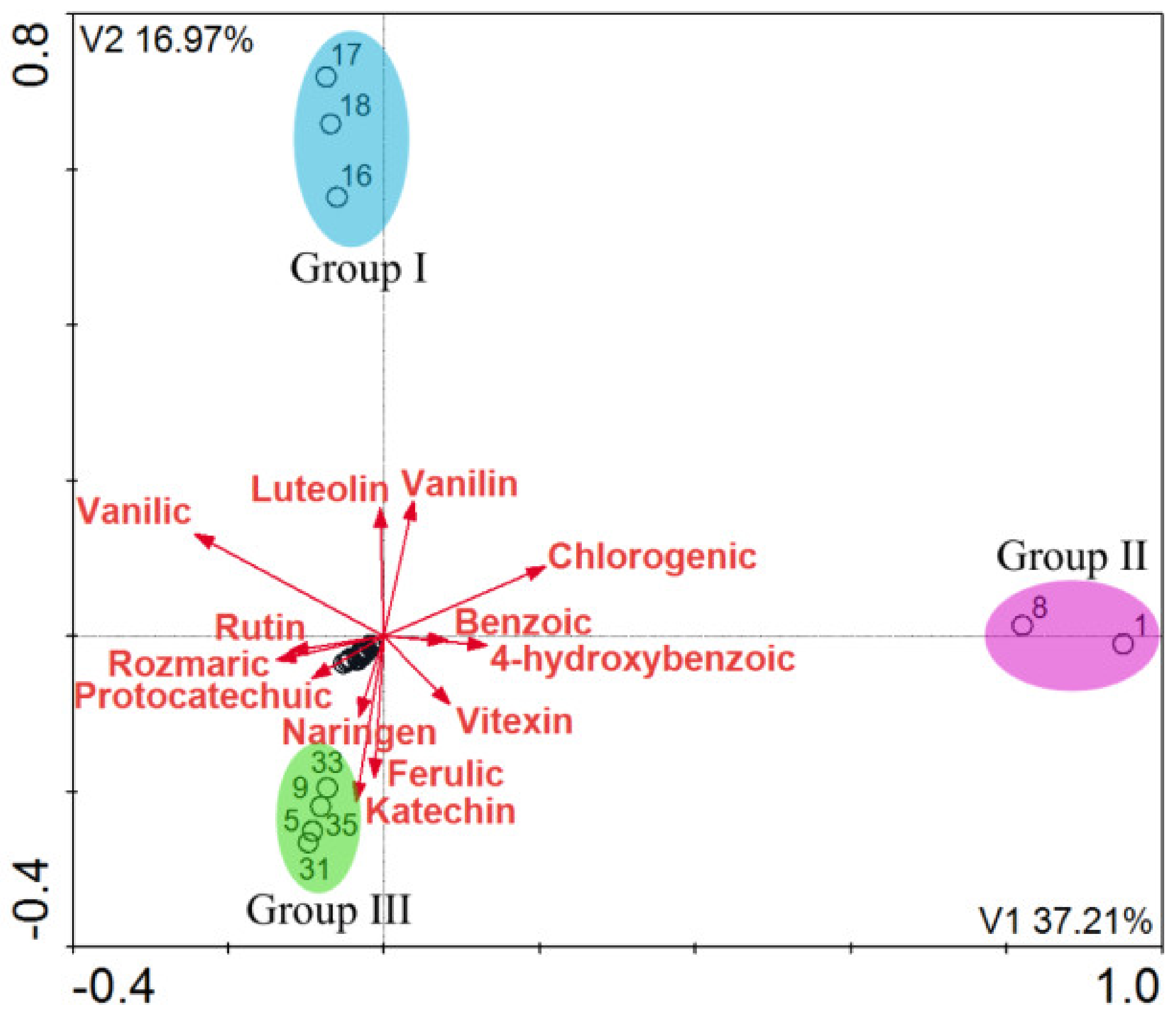