The purpose of this work was the studying and modeling of the extraction properties of the sorbitol-based natural deep eutectic solvent (NADES) and sorbitol-based solvents in regard to biologically-active substances (BASs) from Glycyrrhizae roots using theoretical fundamentals based on the laws of statistical physics, thermodynamics, and physical chemistry previously developed by us. In our studies, we used Glycyrrhizae roots, simple maceration, plant raw material:solvent ratio 1:10 w/v, temperature 25 °C, extraction time 24 h; standards of licuroside and glycyram; RP HPLC, differential scanning calorimetry, integral dielectric, impedance and conductivity spectroscopy method of analysis; the following solvents: sorbitol-based NADES sorbitol:malic acid:water (1:1:3 in molar ratio), a modified solvent based on NADES sorbitol:malic acid:water:glycerin (1:1:1:1 in molar ratio) and sorbitol-based solvents sorbitol:ethanol:water at different ratios. It has been found that regression equations for sorbitol-based solvents in coordinates predicted by the theory have a high value of determination coefficient that equals to R2e = 0.993 for glycyram and R2e = 0.976 for licuroside. It has been found that the extraction properties of sorbitol-based NADES with a dielectric constant (ε) equal to 33 ± 2 units are equivalent to those of the sorbitol:ethanol:water solvent with ε = 34 units, and the extraction properties of modified solvent based on NADES with ε = 41 ± 2 units are inferior to those of the sorbitol-ethanol-water solvents with maximum value of BASs yield with the dielectric constant range 40 ÷ 50 units. The theoretical fundamentals suggested provide a possibility for an explanation of the mechanism, quantitative description of the extraction properties of the solvent, and target search of the optimal solvent by its dielectric constant. View Full-Text
Keywords: Glycyrrhizae roots; licuroside; glycyram; natural deep eutectic solvent; sorbitol; dielectric constant; mathematical model Glycyrrhizae roots; licuroside; glycyram; natural deep eutectic solvent; sorbitol; dielectric constant; mathematical model
►▼ Show Figures 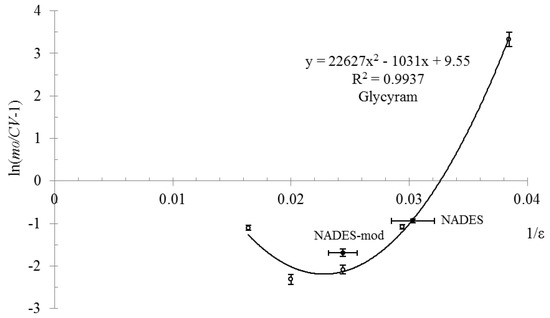