Background: Qianhu is a traditional Chinese medicine. It is thought that Qianhu roots will harden after bolting and not be suitable for medicinal purposes. Bolting Qianhu and unbolting Qianhu are referred to as “Xiong Qianhu” and “Ci Qianhu,” respectively. In this study, the properties, microscopic and chemical characteristics of Ci Qianhu and Xiong Qianhu roots were compared using fluorescence microscopy, laser microdissection coupled with ultra-high-performance liquid chromatography-quadrupole/time-of-flight mass spectrometry, and high-performance liquid chromatography with diode-array detection. Results: Microscopy results showed that the area of secondary xylem in the root increased after bolting, with the cork and secretory canals showing strong fluorescence intensity. A total of 34 peaks, mostly pyranocoumarins, were identified in the tissues of Ci Qianhu and Xiong Qianhu. The secretory canals contained the highest variability of coumarins, whereas the secondary xylem contained the least coumarins. Moreover, seven coumarins, especially the pyran- coumarin, decreased after bolting. Generally, both before and after bolting, coumarin level was the highest in the bark, followed by the middle part, and the lowest in the inner part. Conclusion: Thus, it was indicated that the area of secondary xylem increased after bolting, however the coumarin variant and content decreased in the secondary xylem of Qianhu. The result shows that the quality of Qianhu decreases after bolting, which supports the viewpoint that Xiong Qianhu is not suitable for medicinal use. View Full-Text
Keywords: bolting; Peucedanum praeruptorum Dunn; microstructure; LMD; UPLC-Q/TOF–MS; HPLC–DAD bolting; Peucedanum praeruptorum Dunn; microstructure; LMD; UPLC-Q/TOF–MS; HPLC–DAD
►▼ Show Figures 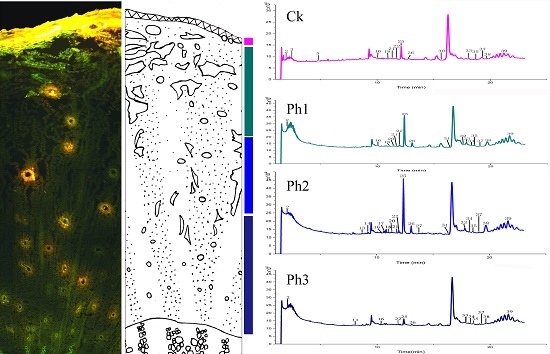