Anthra[1,2-d][1,2,3]triazine-4,7,12(3H)-triones as a New Class of Antistaphylococcal Agents: Synthesis and Biological Evaluation

Vanadium(IV) complexes are actively studied as potential candidates for molecular spin qubits operating at room temperatures. They have longer electron spin decoherence times than many other transition ions, being the key property for applications in quantum information processing. In most cases reported to date, the molecular complexes were optimized through the design for this purpose. In this work, we investigate the relaxation properties of vanadium(IV) ions incorporated in complexes with lanthanides using electron paramagnetic resonance (EPR). In all cases, the VO6 moieties with no nuclear spins in the first coordination sphere are addressed. We develop and implement the approaches for facile diagnostics of relaxation characteristics in individual VO6 moieties of such compounds. Remarkably, the estimated relaxation times are found to be close to those of other vanadium-based qubits obtained previously. In the future, a synergistic combination of qubit-friendly properties of vanadium ions with single-molecule magnetism and luminescence of lanthanides can be pursued to realize new functionalities of such materials.
Keywords: vanadium(IV) ions; EPR; relaxation times vanadium(IV) ions; EPR; relaxation times

The search for molecular spin qubits with suitable physical properties is one of the main targets on the way to the implementation of quantum spin technologies and quantum computing [1,2]. Among other candidates for molecular spin qubits, vanadium-based complexes attracted special attention during the past decade due to their long decoherence times, both at cryogenic and room temperatures [3,4,5,6,7,8,9,10,11,12,13,14,15]. The vanadium(IV) ion has an electron spin S = 1/2 and a nuclear spin I = 7/2 for stable isotope 51V of nearly 100% natural abundance. These properties determine the intrinsically longer electron spin relaxation times compared to high-spin (S > 1/2) ions, and, at the same time, provide a set of nuclear spin states for manipulation of multiple coherences. Some previous works were concerned with the frozen solutions of vanadium(IV) complexes [3,4,7,13,14], while the others considered solid-state compounds and their relaxation properties. The longest decoherence time (also called dephasing, phase memory, sometimes transverse relaxation time) at room temperature Tm~1 μs was obtained for vanadyl phthalocyanine complexes with nuclear spin-free ligands in the solid-state [6].
Seeking for the molecular systems with the longest decoherence times available, one should also consider some of the stable organic radicals (S = 1/2), which could have longer Tm than vanadium ions at room temperatures. For example, triarylmethyl (trityl) radicals are actively used nowadays in biological applications of EPR at ambient conditions [16,17,18]. For instance, it was demonstrated that even in aqueous solution at 310 K the dephasing time of the (immobilized) trityl label attached to DNA can reach Tm = 1.4 μs, whereas in glassy trehalose powder at 300 K it is Tm = 2.2 μs, both being longer than the record value for vanadium-based qubit being ~1 μs at 300 K [5,6]. Therefore, in terms of the relaxation properties, vanadium-based qubits need further development to outperform the existing molecular competitors such as trityls.
Most of the studies on vanadium-based qubit candidates were dealing with specially designed molecular complexes, even if they were later assembled into the dedicated architectures such as MOFs [11]. In this work, we approach the same task from the opposite side. In fact, we selected vanadium-containing complexes of lanthanides (initially designed for another research) and attempted to investigate what would be the intrinsic electron spin relaxation of vanadium moieties in such more complicated compounds. As we show below, such ad-hoc testing yielded unexpectedly promising results, and in this way, it outlines possible future strategies for designing complex structures incorporating vanadium-based qubits.
More specifically, it is often attractive to design compounds with multiple functionalities. For instance, developing complexes, which include lanthanide ions along with vanadium building blocks, would potentially pave the way for combining luminescent characteristics and even single-molecule magnetism with qubit-friendly properties of vanadium ions. Although at the moment, this is feasible only in the long run, investigation of representative compounds of this type might be insightful. With this purpose, we have studied the spectroscopic and relaxation properties in a series of vanadium complexes with lanthanides using EPR spectroscopy. All these complexes include VO6 octahedral units, which to the best of our knowledge, have not yet been considered as potential qubits at room temperatures (only low-temperature relaxation studies were performed for some complexes [13,14]). At the first step of this research, diamagnetic lanthanides in the complexes with paramagnetic vanadium ions were addressed. Below we describe the developed approaches, the obtained results, and compare them with those of other previously studied vanadium-based molecular spin qubits.

The structures of compounds I and II were described in detail previously [19]. Compounds I and II are isostructural octanuclear molecular complexes formed by two binuclear cationic fragments [Ln(VO)(cbdc)2(H2O)7]+, two anionic moieties [VO(cbdc)2(H2O)]2−, and two K+ cations, which connect them. Figure 1 shows the structure of compound II, which is similar to the structure of the representative compound I.
The structure of complex III was determined by single-crystal XRD. It comprises two mononuclear bis-chelate dianions [(VO)(cbdc)2(H2O)]2− containing crystallographically equivalent V1 atoms. The coordination polyhedron of the V1 atom can be described as a distorted octahedron (chromophore VO6) formed by four O atoms of two chelating cbdc2− anions in the equatorial plane (V–O 1.97–2.01 Å) and the water O (V–O 2.28 Å) and vanadyl O atoms (V=O 1.60 Å) in the axial positions (Figure 2, selected bond lengths, distances, and angles are given in Table S1). Dianions [(VO)(cbdc)2(H2O)]2− in III are linked to the Y atom via coordination of the carboxylate O atoms of cbdc2– anions, thus forming the anionic complex [Y(VO)2(cbdc)4(H2O)8]− ({YV2}) having the trinuclear metal core YV2 (Figure 2). The distances V···Y and V···V within the trinuclear unit {YV2} are equal to 5.69 and 6.35 Å, respectively. The coordination polyhedron of the Y atom (chromophore YO8) can be described as a distorted triangular dodecahedron (TDD-8) [20], the vertexes of which are occupied by 6 water oxygen atoms (O2W, O3W, O4W) and 2 carboxylate oxygen atoms (O9) (Y–O 2.33‒2.36 Å) (Figure 2). In the crystals of III, the heterometallic units {YV2} are linked into a 1D polymeric structure via Na atoms coordinated to the carboxylate O atoms (Na–O 2.63 Å) and water O atoms (Na–O 2.41 Å) of vanadyl-containing moieties {(VO)(cbdc)2(H2O)} of neighboring {YV2} units. In addition, each Na atom coordinates two O atoms of water molecules (Na–O1W 2.44 Å) (Figure 3).
The complexes III and IV are isostructural according to powder XRD (see Figure S1). Thus, the structure of V-Ln heterometallic compounds with cbdc2− anions is determined by the presence and the nature of alkali cation: complexes I and II are molecular, and compounds III and IV are polymeric.
Remarkably, in all cases, the first coordination sphere of vanadium ions contains only 6 oxygens and, therefore, is nuclear spin-free. This is one of the prerequisites for good relaxation properties of these moieties, which will be demonstrated in the sections below.

The temperature dependence of magnetic susceptibility for compounds I and II was reported and discussed previously [19] (see Figure S2). The vanadium units are well magnetically isolated from each other in I, II, and magnetic susceptibility is essentially temperature-independent within 2–300 K. The compounds III and IV feature very similar vanadium-based building blocks, allowing us to assume that all general trends should be the same for compounds I–IV. Indeed, the observed trends in CW EPR for I–IV were very similar.
Figure 4 shows CW EPR spectra of studied compounds I–IV vs. temperature at 20–293 K. Only slight variations of the spectral shapes vs. temperature were observed, all being assigned to the changes in the linewidth of the multicomponent spectra described by the same principle spectroscopic parameters (g- and hyperfine interaction (A) tensors). These spectra can be satisfactorily simulated in a model of one V4+ ion with the pronounced splitting due to the hyperfine interaction with 51V nucleus having I = 7/2 spin (see Figure 4 and Table 1 for parameters). No exchange coupling between two vanadium moieties had to be taken into account, which agrees with magnetic susceptibility data. This is reasonable since the two vanadium moieties in the structure of these complexes were sufficiently distant providing weak exchange couplings. Most evidently, in all spectra shown in Figure 4 we do observe hyperfine splitting characteristic for single vanadium(IV) [6], which would not be the case if the intermolecular exchange couplings were sensible. Thus, in principle, the vanadium moieties in compounds I–IV were well magnetically isolated, and the similarity of the EPR parameters for I, II vs. III, IV suggests their similar magnetic behaviors.

Long electron spin decoherence times of vanadium(IV) complexes, especially at room temperatures, have attracted significant attention during recent years. Several ways of molecular design have been employed thus far, aiming at the removal of nuclear spin-carrying atoms from the vicinity of the vanadium center, and at adjusting the vibrational modes influencing relaxation. The Tm values higher than 1 µs at room temperature still have to be achieved, and the research in this direction still continues in several groups.
In this work, we have mapped the magnetic properties of several vanadium(IV) complexes with lanthanides for potential future directions in this field. We assume that, at some point, vanadium-based qubits can be combined with other functionalities provided by lanthanides, e.g., single-molecule magnetism or luminescence. As the first step in that direction, we have studied the magnetic properties of V-Ln heterometallic complexes. It has been found that the Tm values in complexes of vanadium(IV) with diamagnetic lanthanides are generally comparable to those exhibited by other vanadium-based qubits specially designed for this purpose [3,4,5,6,7,8,9,15]. First of all, this owes to the nuclear spin-free first coordination sphere of the VO6 moiety. We also did not observe the strongly detrimental influence of the dynamic Jahn–Teller effect at room temperature. In order to investigate relaxation properties, we dissolved the initial compounds in a water/glycerol mixture, performed pulse EPR measurements within T = 10–160 K in the glassy state, and then theoretically extrapolated the data up to room temperature, validating such approach by auxiliary experiments in glassy trehalose. Altogether, this approach provides a useful methodology for facile estimation of room-temperature Tm values in vanadium-based qubits. The study of other vanadium complexes of lanthanides, including those with paramagnetic lanthanide ions, is underway in our laboratories.

This work was supported by the Russian Science Foundation: projects Nos. 17-13-01412 (EPR measurements) and 19-73-10181 (synthesis, X-ray and magnetic measurements). We thank the Ministry of Science and Higher Education of the RF for access to the EPR equipment. Single-crystal and powder X-ray diffraction analysis, IR spectroscopy, CHN elemental analysis, and magnetic measurements were performed using shared experimental facilities supported by the IGIC RAS state assignment.

We are grateful to Maksim A. Shmelev for the XPRD experiments. 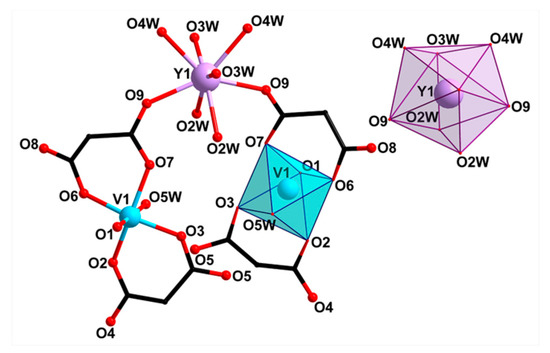