Amaranthus hypochondriacus spp. is a commonly grown cereal in Latin America, known for its high protein content. The objective of this study was to separate and identify bioactive peptides found in amaranth seeds through enzymatically-assisted hydrolysis using alcalase and flavourzyme. Hydrolysis was carried out for each enzyme separately and compared to two-step continuous process where both enzymes were combined. The biological activity of the resulting three hydrolysates was analyzed, finding, in general, higher bioactive potential of the hydrolysate obtained in a continuous process (combined enzymes). Its fractions were separated by RP-HPLC, and their bioactivity was analyzed. In particular, two fractions showed the highest biological activity as ACE inhibitors with IC50 at 0.158 and 0.134, thrombin inhibitors with IC50 of 167 and 155, and antioxidants in ABTS assay with SC50 at 1.375 and 0.992 mg/L, respectively. Further sequence analysis of the bioactive peptides was carried out using MALDI-TOF, which identified amino acid chains that have not been reported as bioactive so far. Bibliographic survey allowed identification of similarities between peptides reported in amaranth and other proteins. In conclusion, amaranth proteins are a potential source of peptides with multifunctional activity. View Full-Text
Keywords: amaranth protein; flavourzyme; alcalase; bioactive peptides; hydrolysates amaranth protein; flavourzyme; alcalase; bioactive peptides; hydrolysates
►▼ Show Figures 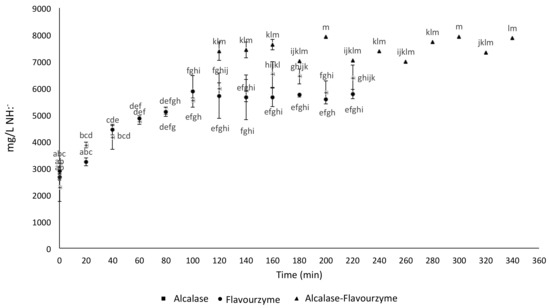