Development of a Sustainable, Simple, and Robust Method for Efficient l-DOPA Extraction

Since the early studies on surface-enhanced Raman scattering (SERS), amorphous carbon has been known as a potential contaminant that generates intense, broad background signals [1,2]. Amorphous carbon signals have been reported for SERS on gold and silver nanostructures [3,4] and were described to originate from initial carbon contamination on the metal surface [5], or to be created in situ by photodegradation under the highly-enhanced fields [1,2,6]. Amorphous carbon is made up from various carbon species, whose broad ensemble spectrum resembles that of graphite [7,8]. Especially in single-molecule SERS and tip-enhanced Raman spectroscopy, amorphous carbon contaminations proved problematic [9]. The intense, fluctuating SERS signals from individual carbon species are easily mistaken for spectral blinking of single analyte molecules [4]. They show strong signals due to resonant excitation [1,10]. Although amorphous carbon is frequently observed in SERS measurements at low molecular concentrations, so far there is no complete understanding of the circumstances of its formation. DNA origami can assemble plasmonic nanoparticles into aggregates with defined geometry and stoichiometry [11,12]. As the shape and material of a plasmonic nanostructure determines the amplitude and resonance wavelength of its localized surface plasmon resonances (LSPRs), DNA origami-based plasmonic nanostructures represent versatile models for fundamental studies on plasmonic nanosystems. DNA origami-based SERS is an emerging field and has potential to offer dedicated platforms for reproducible single-molecule spectroscopy and detection [13,14,15,16,17]. The present study discusses the formation of amorphous carbon on DNA origami-assembled plasmonic nanostructures for several different experimental conditions.

Raman measurements were carried out on a WITec alpha300 confocal Raman microscope (WITec GmbH, Ulm, Germany) with a 10× Nikon EPlan objective (numerical aperture 0.25) or a 100× Olympus MPlanFL N objective (numerical aperture 0.9), with a 50 µm pinhole and 600 gr/mm grating. The laser spot diameters estimated for the 10× objective are: 2.4 µm (λ = 488 nm), 2.6 µm (λ = 532 nm), 3.1 µm (λ = 633 nm), 3.8 µm (λ = 785 nm), for the 100× objective: 0.72 µm (λ = 532 nm). During a scan, the laser is continuously irradiating the sample, while the sample stage is moved in a continuous fashion along the scan path. The speed of this movement depends on the chosen integration time and step size. For the time series in the first part, areas of 170 × 190 µm2 were scanned with the 10× objective and a step size of 5 µm, such that the laser spots of two adjacent measurement points would not overlap. Each time series was conducted on a separate position of the sample. For the spectra from single silver nanolenses in the second part, areas of 25 × 25 µm2 were scanned with 0.5 µm steps, using the 100× objective. The number of scans before the amorphous carbon generation set on were observed to vary between different samples, but within a certain sample, the values were consistent. An assignment of background signals in the SERS spectra is given in the supporting information [45,46,47].
AFM measurements were carried out under dry conditions after the Raman measurements, with soft Tap150Al-G cantilevers in tapping mode to prevent sample manipulation.
Citrate-stabilized 60 nm gold nanoparticles from BBI Solutions (100 μL, 1 nM) were incubated with bis(p-sulfonatophenyl)phenylphosphine (BSPP) solution (20 μL, 2.5 mM) at 40 °C for 1 h. SDS (to a final concentration of 0.02%) and DNA coating strands (T13-SH, to a final concentration of 15 μM) were added. Samples were incubated at 40 °C for 30 min. The NaCl concentration was elevated in a stepwise manner, with at least 20 min of shaking at 40 °C between each step. First, 1 M NaCl was added in 20 mM steps, until a concentration of 100 mM was reached. Then, the NaCl concentration was increased to 150 mM, 200 mM, 300 mM, 400 mM, 600 mM and 750 mM, in the last four steps by adding 2.5 M NaCl.
Particles were purified by five cycles of centrifugation, supernatant removal and pellet resuspension in 400 μL 1× TAE, 11 mM MgCl2, 0.02% SDS.
Silver nanoparticles were coated with a similar protocol as described in ref. [16]. 60 nm silver nanoparticles were coated with dithiol-carrying DNA to counteract the weaker binding strength, but the dithiolated DNA still detached faster from the silver nanoparticles than monothiolated DNA from gold nanoparticles.
For the dimer assembly, triangular DNA origami scaffolds with four extended oligonucleotides on each face were assembled as described earlier [17]. The particles were bound by incubating 0.2 nM DNA origami solution with 0.4 nM DNA-coated 60 nm gold or silver nanoparticles for 3 h at room temperature. The products were purified by gel electrophoresis (1% agarose, 50 V for 90 min) and extracted by squeezing between two Parafilm-wrapped microscopy slides. The silver nanolenses were assembled as described elsewhere [16]. As in the reference, a streptavidin molecule was also bound on the DNA origami scaffold.
For deposition on silicon, substrates were plasma-cleaned, after which the nanostructure suspensions were added and incubated for 1 h with an excess of 10× TAE 120 mM MgCl2. The magnesium mediates binding between the negatively-charged DNA origami assemblies and the OH-groups on the silicon wafer. Substrates were washed with 4 mL EtOH/water 1:1 and blow-dried. For deposition on CaF2, samples were added to the substrate, incubated for 2 min, washed with 4 mL EtOH/water 1:1 and blow-dried.
FDTD simulations were carried out with Lumerical FDTD Solutions 8.6.3, for 60 nm dimers with 3 nm gap, 1.5 nm DNA coating around the particles, on a silicon substrate with a 2 nm silicon oxide layer, with exciting light polarized along the dimer axis and injected perpendicular to the dimer axis. Refractive indices: gold as determined by Johnson and Christy [48], silver, silicon and silicon dioxide as determined by Palik [49], DNA coating as determined by Thacker et al.: 1.7 [50], surrounding medium: 1.0. The simulation volume was surrounded by a perfectly matched layer absorbing boundary, the mesh size was 0.25 nm in the hot spot area.

C.H. prepared the samples and ran the simulations, C.H. and Y.K. did the measurements, C.H. and I.B. planned the experiments, C.H., J.K. and I.B. interpreted the results and wrote the manuscript.

This research was supported by the Deutsche Forschungsgemeinschaft (DFG), the European Regional Development Fund (EFRE), by the University of Potsdam and the Federal Institute of Materials Research (BAM). C.H. is grateful for funding through DFG GSC 1013, SALSA. I.B. acknowledges support by the European Research Council (ERC; consolidator grant no. 772752). 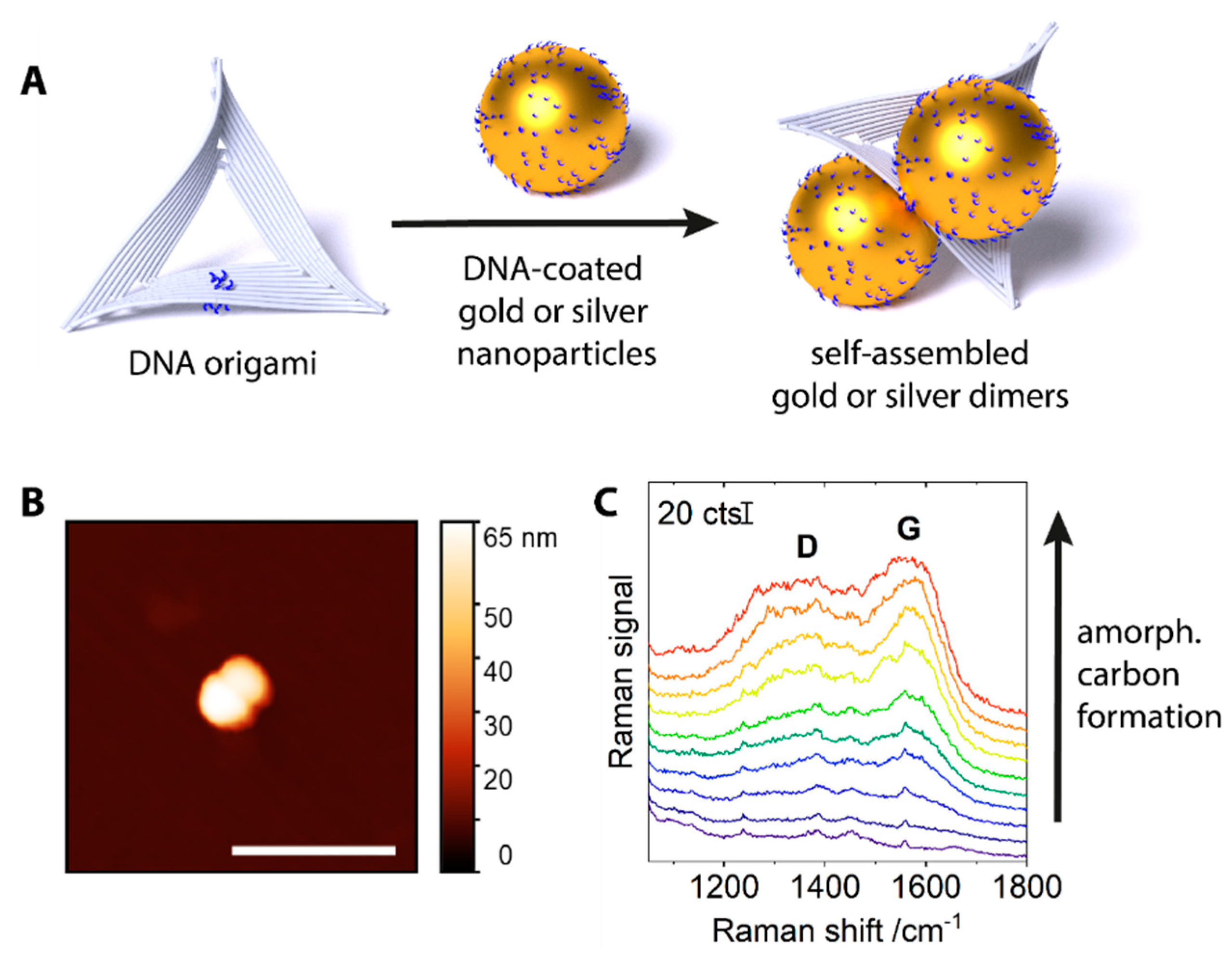 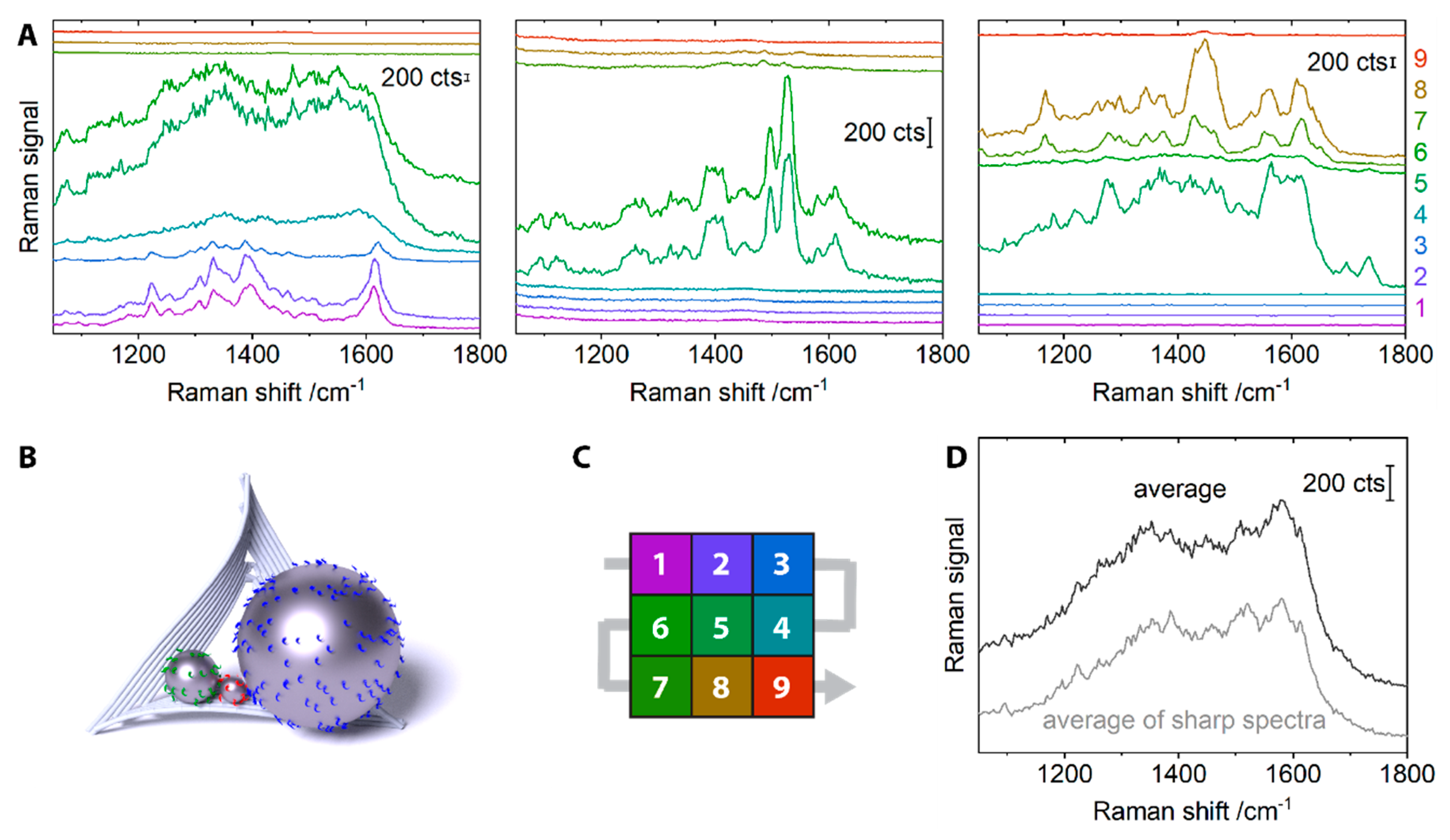