The theoretical calculation of pKa values for Brønsted acids is a challenging task that involves sophisticated and time-consuming methods. Therefore, heuristic approaches are efficient and appealing methodologies to approximate these values. Herein, we used the maximum surface electrostatic potential (VS,max) on the acidic hydrogen atoms of carboxylic acids to describe the H-bond interaction with water (the same descriptor that is used to characterize σ-bonded complexes) and correlate the results with experimental pKa values to obtain a predictive model for other carboxylic acids. We benchmarked six different methods, all including an implicit solvation model (water): Five density functionals and the Møller–Plesset second order perturbation theory in combination with six different basis sets for a total of thirty-six levels of theory. The ωB97X-D/cc-pVDZ level of theory stood out as the best one for consistently reproducing the reported pKa values, with a predictive power of 98% correlation in a test set of ten other carboxylic acids. View Full-Text
Keywords: pKa; hydrogen bond; maximum surface potential; σ–hole pKa; hydrogen bond; maximum surface potential; σ–hole
►▼ Show Figures 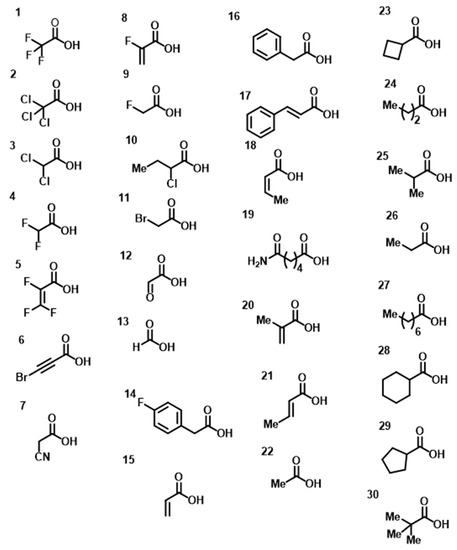 
Caballero-García, Guillermo, Gustavo Mondragón-Solórzano, Raúl Torres-Cadena, Marco Díaz-García, Jacinto Sandoval-Lira, and Joaquín Barroso-Flores. 2019. "Calculation of VS,max and Its Use as a Descriptor for the Theoretical Calculation of pKa Values for Carboxylic Acids" Molecules 24, no. 1: 79. https://doi.org/10.3390/molecules24010079