Four New Lignans from Kadsura Interior and Their Bioactivity

The objective of our study was to determine the effects of clinoptilolite supplemented in colostrum on the blood serum protein electrophoretic pattern of new-born calves. Methods: Romanian Black and White new-born calves involved in the study were divided into 3 groups: the control group (C) that received colostrum without clinoptilolite, and experimental groups I (E1) and II (E2) that received colostrum supplemented with 0.5% and 2% clinoptilolite, respectively. The concentration of total protein and protein fractions (albumin, α1-globulin, α2-globulin, β-globulin and γ-globulin) were analyzed by electrophoresis on cellulose acetate. Results: At hour 30 after birth, concentrations of γ-globulins, β-globulin and total protein in E1 group of calves were higher than in control group by 42.11% (p < 0.05), 28.48% (p > 0.05) and 18.52% (p > 0.05), respectively, and were higher, but not significantly, in group E2 compared to the control group. This was in accordance with a significant lower albumin/globulin ratio in groups E1 and E2 (29.35%, p < 0.05 and 35.87%, p < 0.05, respectively) than in control group at 30 h postpartum, which indicates an obvious increase of the globulins fraction in experimental groups. The conclusion: Clinoptilolite was effective in improving passive transfer in new-born calves, but it was more effective if added in colostrum with a dose of 0.5% than with a dose of 2%. View Full-Text
Keywords: electrophoresis; calves; clinoptilolite; γ-globulin electrophoresis; calves; clinoptilolite; γ-globulin
►▼ Show Figures 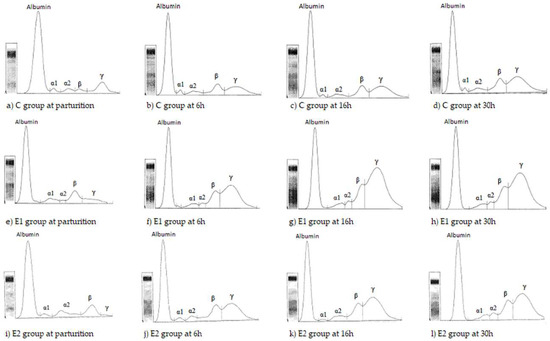