Cistanche deserticola Y. C. Ma, a precious parasitic medicinal herb distributed in desert areas in the Northwest of China, also known as “desert ginseng”, has been used in China for thousands of years for its nourishing effects. The phenylethanoid glycosides (PeGs) have been proven as the main effective compounds due to their neuroprotective effects and were used for quality control. In this study, echinacoside content, a representative PeG, total phenolic content, DPPH scavenging activity, and PAL activity were determined in different tissues of C. deserticola. Our results showed that most indices had a similar pattern of scale > cambium ring > pith and bottom part > middle part > upper part. Besides, stereomicroscopic observation showed that the scale surface was densely covered with physical wounds formed during vertical and broadwise growth in sand. Thus, wound area was quantified and a linear regression analysis was conducted between wound area and PAL activity, total phenolics, and echinacoside content. Our results suggested that physical wounding caused by sand might play an important role in echinacoside biosynthesis which has never been noticed in C. deserticola development. Furthermore, the coexistence of the highest PAL activity and highest echinacoside accumulation in scale tissue might indicate that the biosynthetic site of echinacoside in C. deseticola Y. C. Ma is mainly in the scale tissue. View Full-Text
Keywords: biosynthesis; Cistanche deserticola Y. C. Ma; echinacoside; phenylalanine ammonia lyase; physical wounding biosynthesis; Cistanche deserticola Y. C. Ma; echinacoside; phenylalanine ammonia lyase; physical wounding
►▼ Show Figures 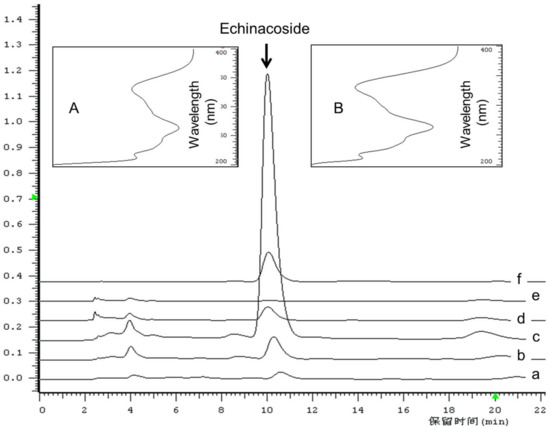