Protein-protein interactions (PPIs) play important roles in various aspects of the structural and functional organization of cells; thus, detecting PPIs is one of the most important issues in current molecular biology. Although much effort has been devoted to using high-throughput techniques to identify protein-protein interactions, the experimental methods are both time-consuming and costly. In addition, they yield high rates of false positive and false negative results. In addition, most of the proposed computational methods are limited in information about protein homology or the interaction marks of the protein partners. In this paper, we report a computational method only using the information from protein sequences. The main improvements come from novel protein sequence representation by combing the continuous and discrete wavelet transforms and from adopting weighted sparse representation-based classifier (WSRC). The proposed method was used to predict PPIs from three different datasets: yeast, human and H. pylori. In addition, we employed the prediction model trained on the PPIs dataset of yeast to predict the PPIs of six datasets of other species. To further evaluate the performance of the prediction model, we compared WSRC with the state-of-the-art support vector machine classifier. When predicting PPIs of yeast, humans and H. pylori dataset, we obtained high average prediction accuracies of 97.38%, 98.92% and 93.93% respectively. In the cross-species experiments, most of the prediction accuracies are over 94%. These promising results show that the proposed method is indeed capable of obtaining higher performance in PPIs detection. View Full-Text
Keywords: protein-protein interaction; protein sequence; weighted sparse representation protein-protein interaction; protein sequence; weighted sparse representation
►▼ Show Figures 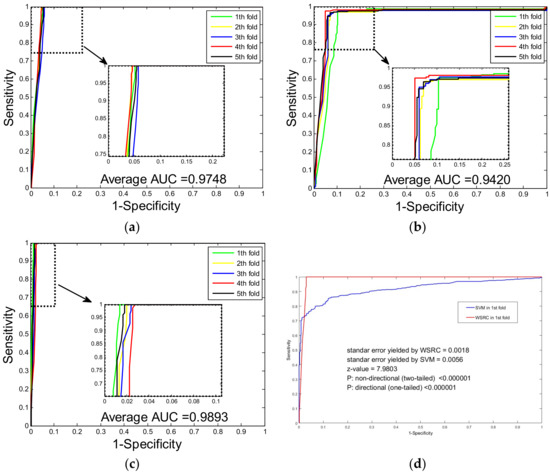