Investigation into Improving the Aqueous Solubility of the Thieno[2,3-b]pyridine Anti-Proliferative Agents
Previous Article in Journal

A panel of docking scaffolds was developed for the known molecular targets of the anticancer agents, thieno[2,3-b]pyridines, in order to glean insight into their mechanism of action. The reported targets are the copper-trafficking antioxidant 1 protein, tyrosyl DNA phosphodiesterase 1, the colchicine binding site in tubulin, adenosine A2A receptor, and, finally, phospholipase C-δ1. According to the panel, the A2A receptor showed the strongest binding, inferring it to be the most plausible target, closely followed by tubulin. To investigate whether the thieno[2,3-b]pyridines modulate G protein-coupled receptors (GPCRs) other than A2A, a screen against 168 GPCRs was conducted. According to the results, ligand 1 modulates five receptors in the low µM region, four as an antagonist; CRL-RAMP3 (IC50—11.9 µM), NPSR1B (IC50—1.0 µM), PRLHR (IC50—9.3 µM), and CXCR4 (IC50—6.9 µM). Finally, one agonist, GPRR35, was found (EC50 of 7.5 µM). Molecular modelling showed good binding to all of the receptors investigated; however, none of these surpass the A2A receptor. Furthermore, the newly-identified receptors are relatively modestly expressed in the cancer cell lines most affected by the thieno[2,3-b]pyridines, making them less likely to be the main targets of the mechanism of action for this compound class. Nevertheless, new modulators against GPCRs are of an interest as potential hits for further drug development. View Full-Text
Keywords: docking; molecular and homology modelling; drug discovery; chemical space docking; molecular and homology modelling; drug discovery; chemical space
►▼ Show Figures 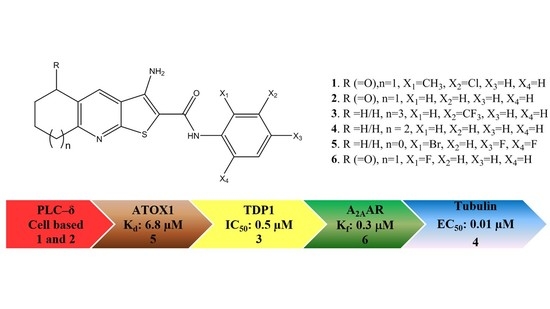