:
Microgreens are an excellent source of health-maintaining compounds, and the accumulation of these compounds in plant tissues may be stimulated by exogenous stimuli. While light quality effects on green basil microgreens are known, the present paper aims at improving the quality of acyanic (green) and cyanic (red) basil microgreens with different ratios of LED blue and red illumination. Growth, assimilatory and anthocyanin pigments, chlorophyll fluorescence, total phenolic, flavonoids, selected phenolic acid contents and antioxidant activity were assessed in microgreens grown for 17 days. Growth of microgreens was enhanced with predominantly blue illumination, larger cotyledon area and higher fresh mass. The same treatment elevated chlorophyll a and anthocyanin pigments contents. Colored light treatments decreased chlorophyll fluorescence ΦPSII values significantly in the green cultivar. Stimulation of phenolic synthesis and free radical scavenging activity were improved by predominantly red light in the green cultivar (up to 1.87 fold) and by predominantly blue light in the red cultivar (up to 1.73 fold). Rosmarinic and gallic acid synthesis was higher (up to 15- and 4-fold, respectively, compared to white treatment) in predominantly blue illumination. Red and blue LED ratios can be tailored to induce superior growth and phenolic contents in both red and green basil microgreens, as a convenient tool for producing higher quality foods.
Keywords:
basil; anthocyanins; light emitting diodes; chlorophyll fluorescence; phenolic acids 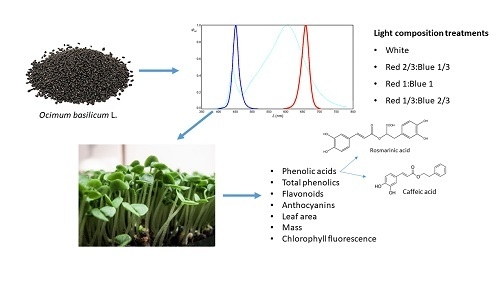 Microgreens, the plantlet stage of various species, have been consumed for a long time, especially in the Asian countries, but also in Western countries in the last decades, for the various flavors, textures and tastes they can impart to food [1,2]. Usually produced in ecological setups, microgreens are consumed raw, retaining all the chemical constituents unaltered and are considered functional foods, providing, besides nutrient intake, positive health related effects [3].
In plant cultivation, various factors may be used in controlled conditions to induce physiological changes in the plant [4]. Plants respond to these stressors by activating a series of mechanisms, similar to responses to pathogenic or environmental stimuli, affecting plant metabolism and increasing synthesis of phytochemicals [5]. This effect is highest in young plants, which have to adapt quickly to fluctuating environmental factors to ensure survival. Among different types of factors, physical ones such as temperature and light influence plant metabolism in a complex manner, since they may alter the expression of competent genes [6].
Light quality and quantity directly influences plant growth and chemical composition; therefore, it can be used as a convenient and highly modifiable factor to obtain vegetal material with tailored composition to specific applications. As chlorophyll pigments absorb mainly in the red (663 nm and 642 nm) and blue (430 nm and 453 nm) regions of light, these wavelengths are the main ones that influence plant growth [7,8]. Red light is sensed in plants by phytochrome receptors (PhyA, PhyB, etc.), presenting two interconvertible Pr and Pfr forms, and it generates responses related to germination, stem elongation, leaf expansion, flowering induction, etc. [9]. Blue light is sensed by cryptochromes and phototropins, and regulates processes such as de-etiolation, phototropism, chloroplast movement, endogenous rhythms, growth of roots, light-induced stomata opening, redox balance, the level of cyclic nucleotides, etc. [10,11]
From a biotechnological point of view, cultivating plants under red light supplementation may lead to increased biomass, higher phenolic contents, activation of antioxidant system, increased luteolin and sinigrin concentrations, etc. At the same time, blue light may lead to increased chlorophyll synthesis, phenolic contents and vitamin C contents in various species, as reviewed in Olle and Viršilė [12]. However, better results are obtained when red and blue light are combined compared to monochromatic treatments, which may offer significant plant yield. Red light matches the absorption maxima of chlorophylls, while blue light induces stomata opening and, thus, allows for better CO2 fixation. The ratio of red to blue light must be carefully selected, as blue light may induce thresholds over which yield decreases may be registered [13,14].
As already noted [14,15], the global requirements of increased food production, areas with limited arable surfaces or daylight, particular climatic conditions, made Controlled Environment Agriculture (CEA) an attractive alternative for producers. Using LED sources with defined wavelength in such environments presents a series of benefits such as maximized growth, control of morphology, optimized flavor and pigmentation, and increased accumulation of bioactive compounds.
Ocimum basilicum L. is a species widely used in food preparations, containing high amounts of phenolic constituents with antioxidant activity, substances that are able to delay or inhibit the oxidation of lipids or other molecules by interfering with oxidative chain reactions, to neutralize free radicals, to quench single and triplet oxygen species and to decompose peroxides [16]. Many cultivars exist, of which many are red pigmented, with differences in chemical composition [17]. Basil microgreens were proven to contain high amounts of phenolic contents and consumer acceptability [18].
The effects of LED illumination in microgreen cultivation has been investigated in several species, such as Brassica oleracea, B. juncea, B. rapa [19,20], pea, broccoli, mustard, borage, amaranth, kale, beet, parsley [21], Valerianella locusta [22], buckwheat [23], Perilla frutescens [24], etc. In basil microgreens, research on light quality regarded the effect of red light supplementation on total phenolic content and antioxidant activity [21]; red, blue and far-red supplementation on antioxidant activity [25]; ultraviolet A (UV-A) supplementation on growth, phenolic, anthocyanin, ascorbate and tocopherol synthesis [24]; and blue light dosage on growth, ascorbate, total phenolic, anthocyanin, flavonoid contents and 2,2-diphenyl-1-picrylhydrazyl (DPPH) antioxidant activity [25]. However, all respective studies tested only a green basil cultivar, “Sweet Genovese”.
The present paper aims to test the following hypotheses: (a) growth of basil microgreens may be influenced by different red:blue light ratios; and (b) depending on the presence of anthocyanins, the metabolic pathways of basil may be differently influenced by light quality, resulting in different quantitative chemical composition. For these purposes, two basil cultivars are employed. One was represented by the same green cultivar “Sweet Genovese” as in other reports to establish a line of comparison and a red leaved cultivar “Red Rubin”, for assessing the influence of the presence of anthocyanins on the effect of light quality on basil chemical composition.

In the current experiment, two basil cultivars were used for microgreens production, “Sweet Genovese”, a green, acyanic cultivar, and “Red Rubin”, a red pigmented, cyanic cultivar, seeds being obtained from a commercial source (Seedaholic Ltd., Clonbur, UK). For each treatment, 150 seeds were sowed in clear plastic boxes (5 boxes per treatment, 3 used for biochemical analyses and 2 for phenotypic measurements), 14 × 14 × 8 cm, using a mixture of general purpose soil and peat moss 2:1. Each light treatment was provided by 6 (2 × 3) 1 W LEDs (OSRAM, Golden Dragon, Munich, Germany), soldered on aluminium radiators to allow heat dissipation. The 4 light treatments were 100% white (White) and various red (R) to blue (B) ratios, as follows: 2R:1B, 1R:1B and 1R:2B, intensities according to Table 4. After seeding, the boxes were kept in the dark for 3 days and afterwards light was supplied at a rate of 120 µmol m−2 s−1 for 12 h each day. The emission spectra of LED lights (according to OSRAM datasheets) used are given in Figure 7.

Total cotyledon area was measured using a Scanalyzer PL (LemnaTec, Aachen, Germany), which allowed photographing the boxes containing microgreens from a fixed height and calculations of areas. Measurements were performed over an 8 days period starting with day 6 after sowing, up to the point where leaves from different individuals began to overlap, preventing accurate measurements. Boxes were photographed sequentially, minimizing the time spent outside the defined light treatment, generally 1 min. The software setup for the phenotyping system was similar to that previously described by Arvidsson et al. [68].
Chlorophyll and carotenoid pigments were extracted in 80% aqueous acetone and quantified by spectrophotometric means using formulas described in Wellburn [69]. Chlorophyll fluorescence was measured using a FMS2 fluorometer (HansaTech, Norfolk, UK) for 10 cotyledons/treatment. Chlorophyll related analyses were performed at the end of the experiment, at 17 days after sowing.
For total phenolics, flavonoids, free radical scavenging activity and anthocyanin evaluations, 10 plantlets were pooled from each of 2 boxes per treatment at defined days, resulting a total of 20 plantlets/treatment/day of assessment. Total phenolics, flavonoids and free radical scavenging activity were assayed in 70% ethanolic extracts, obtained by maceration for 24 h at room temperature, according to methods described in Herald et al. [70]. Anthocyanin determinations were performed according to Lee et al. [71] in methanol:water:hydrochloric acid (70:29:1) mixture extracts. For each assessment, 3 technical replicates were performed.
Individual phenolic acids at 17 days after sowing were determined using a Shimadzu High Performance liquid chromatography (HPLC) (Shimadzu LC-10ADVP, Columbia, MD, USA) coupled to a photodiode array (PDA) detector (Shimadzu SPD-M20A, Columbia, MD, USA). The chromatographic conditions were represented by a Macherey-Nagel C18 reverse phase (150 mm × 4.6 mm × 4 µm) column, water:acetic acid (99:1) (A) and methanol (B) mobile phases, 0.6 mL/min flow rate and 40 °C. The chromatographic program was 0 min 100% A, 5 min 6% B, 5–7 min 6% B, 50 min 30% B, 50–52 min 30% B, 62 min 100% B. Compounds (rosmarinic and caffeic acids) were quantified using external standards, HPLC grade (Sigma, Steinheim, Germany).

Blue and red light LED treatments have a significant potential of improving growth of basil microgreens while increasing also the contents of phenolic compounds as valuable phytochemicals. Considering the developing interest in microgreens as functional foods, improved quality basil microgreens can be achieved using either predominantly red or blue light, depending on the pigmentation of the cultivar. 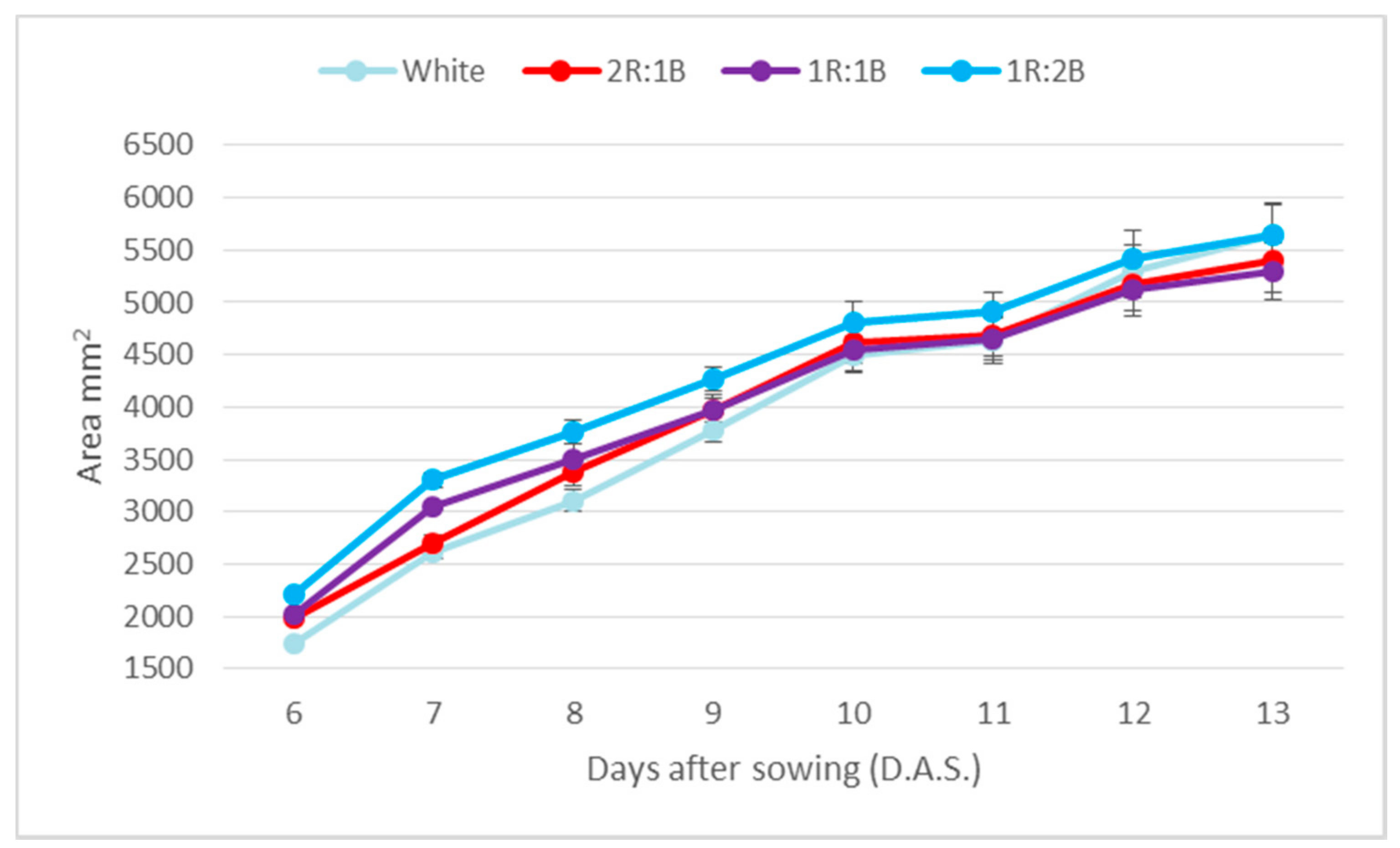 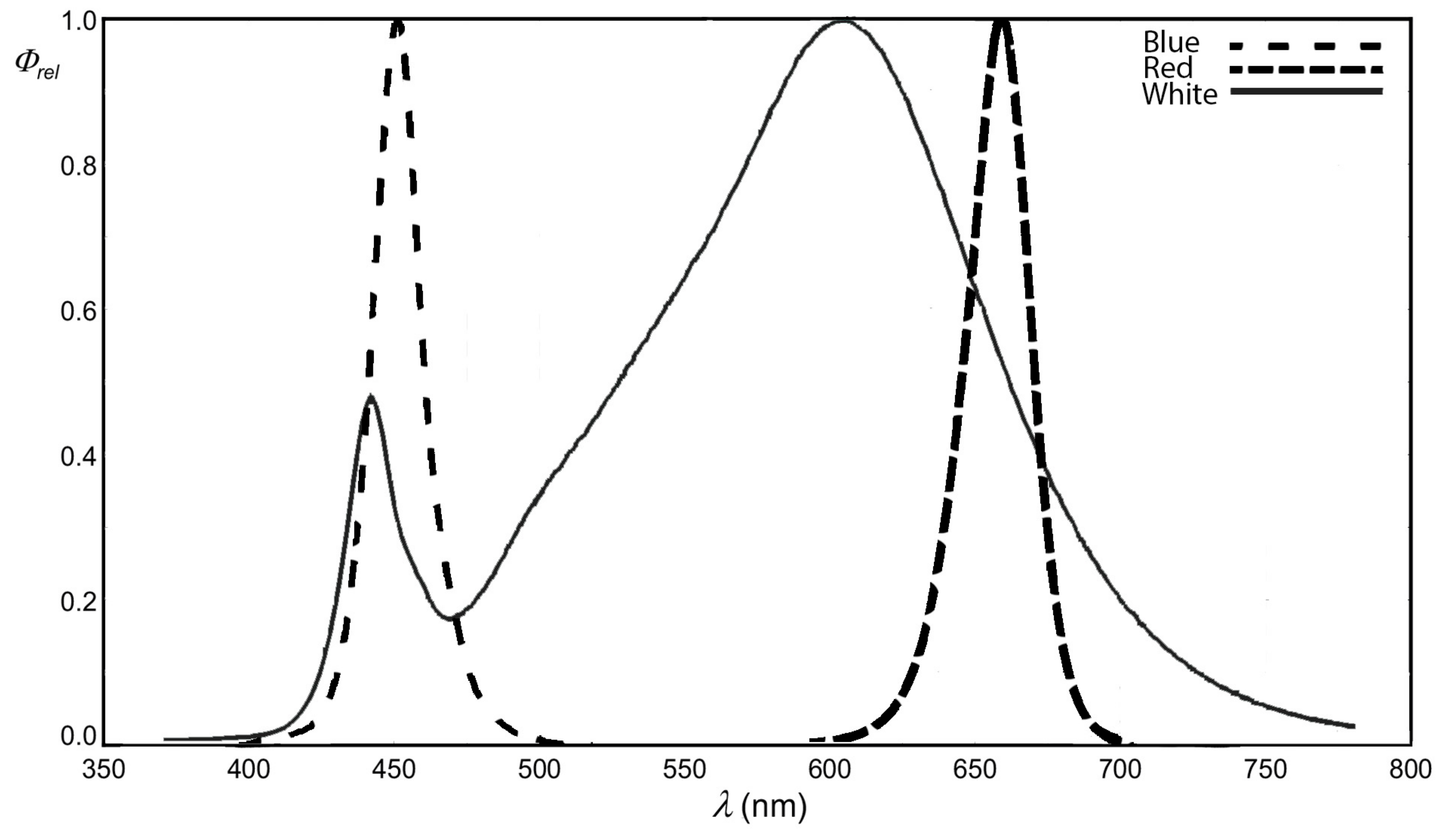