Metabolites Produced by an Endophytic Phomopsis sp. and Their Anti-TMV Activity
Previous Article in Journal

Cyclic peptides are cyclic compounds formed mainly by the amide bonds between either proteinogenic or non-proteinogenic amino acids. This review highlights the occurrence, structures and biological activities of fungal cyclic peptides (excluding cyclodipeptides, and peptides containing ester bonds in the core ring) reported until August 2017. About 293 cyclic peptides belonging to the groups of cyclic tri-, tetra-, penta-, hexa-, hepta-, octa-, nona-, deca-, undeca-, dodeca-, tetradeca-, and octadecapeptides as well as cyclic peptides containing ether bonds in the core ring have been isolated from fungi. They were mainly isolated from the genera Aspergillus, Penicillium, Fusarium, Acremonium and Amanita. Some of them were screened to have antimicrobial, antiviral, cytotoxic, phytotoxic, insecticidal, nematicidal, immunosuppressive and enzyme-inhibitory activities to show their potential applications. Some fungal cyclic peptides such as the echinocandins, pneumocandins and cyclosporin A have been developed as pharmaceuticals. View Full-Text
Keywords: cyclopeptides; fungi; biological activities; occurrence; applications cyclopeptides; fungi; biological activities; occurrence; applications
►▼ Show Figures 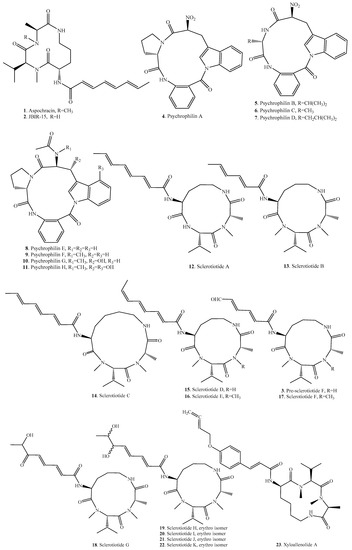