The most important components of Plantago lanceolata L. leaves are catalpol, aucubin, and acteoside (=verbascoside). These bioactive compounds possess different pharmacological effects: anti-inflammatory, antioxidant, antineoplastic, and hepatoprotective. The aim of this study was to protect Plantago lanceolata extract from hydrolysis and to improve its antioxidant effect using self-nano-emulsifying drug delivery systems (SNEDDS). Eight SNEDDS compositions were prepared, and their physical properties, in vitro cytotoxicity, and in vivo AST/ALT values were investigated. MTT cell viability assay was performed on Caco-2 cells. The well-diluted samples (200 to 1000-fold dilutions) proved to be non-cytotoxic. The acute administration of PL-SNEDDS compositions resulted in minor changes in hepatic markers (AST, ALT), except for compositions 4 and 8 due to their high Transcutol contents (80%). The non-toxic compositions showed a significant increase in free radical scavenger activity measured by the DPPH test compared to the blank SNEDDS. An indirect dissolution test was performed, based on the result of the DPPH antioxidant assay; the dissolution profiles of Plantago lancolata extract were statistically different from each SNEDDS. The anti-inflammatory effect of PL-SNEDDS compositions was confirmed by the ear inflammation test. For the complete examination period, all compositions decreased ear edema as compared to the positive (untreated) control. It can be concluded that PL-SNEDDS compositions could be used to deliver active natural compounds in a stable, efficient, and safe manner. View Full-Text
Keywords: SNEDDS; Plantago lanceolata; antioxidant and anti-inflammatory effects; DPPH test; cytotoxicity investigation; MTT-test; Caco-2 cells SNEDDS; Plantago lanceolata; antioxidant and anti-inflammatory effects; DPPH test; cytotoxicity investigation; MTT-test; Caco-2 cells
►▼ Show Figures 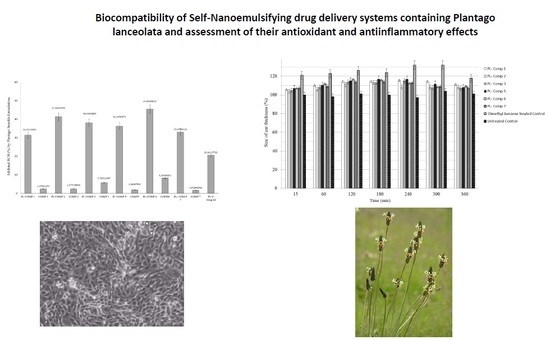