Citrus contain various flavonoids and alkaloids that have multiple biological activities. It is known that the immature Citrus contains larger amounts of bioactive components, than do the mature plants. Although Citrus flavonoids are well known for their biological activities, Citrus alkaloids have not previously been assessed. In this study, we identified synephrine alkaloids as an active compound from immature Citrus unshiu, and investigated the effect of synephrine on eotaxin-1 expression. Eotaxin-1 is a potent chemoattractant for eosinophils, and a critical mediator, during the development of eosinophilic inflammation. We found that synephrine significantly inhibited IL-4-induced eotaxin-1 expression. This synephrine effect was mediated through the inhibition of STAT6 phosphorylation in JAK/STAT signaling. We also found that eosinophil recruitment induced by eotaxin-1 overexpression was inhibited by synephrine. Taken together, these findings indicate that inhibiting IL-4-induced eotaxin-1 expression by synephrine occurs primarily through the suppression of eosinophil recruitment, which is mediated by inhibiting STAT6 phosphorylation.
Keywords: Citrus unshiu; synephrine; STAT6; eotaxin-1; eosinophils Citrus unshiu; synephrine; STAT6; eotaxin-1; eosinophils

Synephrine is an alkaloid that was initially isolated as a synthetic organic compound, first isolated as a natural product from the leaves of various Citrus trees, and which presence has been noted in different Citrus juices [1,2]. The peel of unripe Citrus fruits is the part of the plant that has the highest level of synephrine [3]. The concentration of synephrine is higher in fruits of small diameter, when compared to larger ones, probably due to the higher levels found in their peels, which decrease with the maturation of the fruit [4,5]. Synephrine is also found in the human organism, where it is considered a trace amine, due to its low plasmatic levels [6]. The preparations used in Traditional Chinese Medicine (TCM) are the immature and dried whole fruits from Citrus aurantium[7]. Extracts of Citrus fruits or purified synephrine are also marketed in the US, sometimes in combination with caffeine, as a weight-loss-promoting dietary supplement for oral consumption. Chemically, synephrine is similar to adrenaline or epinephrine. Synephrine activates several types of adrenergic receptors [8,9]. Therefore, it is used pharmacologically as a sympathomimetic agent, with vasoconstrictor and bronchiectatic agent.
Eosinophils are crucial effector cells, in the inflammatory reactions associated with allergic-inflammatory diseases and parasitic infections. Their products, such as cytotoxic granule proteins, leukotrienes, and cytokines, are involved in the pathological changes seen at the sites of inflammation. Eosinophils are recruited to the sites of inflammation by locally released chemotactic agents. The CC chemokine, eotaxin-1, a potent chemoattractnat for eosinohpils, is a critical mediator for the development and perpetuation of allergen-induced eosinophilic inflammation [10]. Eotaxin-1 is produced at high levels in patients with atopic dermatitis, and is localized to the inflammation site. This concentrated expression may preferentially target eosinophils to the epithelium, and induce degranulation, leading to the release of epithelium-damaging proteins [11].
The JAK-STAT signaling pathway becomes activated, in response to cytokines like interleukins (IL), interferons (IFN), and certain peptide hormones [12,13,14], all of which are thought to have biologically significant roles in inflammatory diseases [15]. IL-4 is a pivotal cytokine associated with allergic disease that supports Th2 development, and that is produced by Th2 cells, basophils, and mast cells [16,17,18]. The transcription factor STAT6 was shown to be responsible for the IL-4-mediated induction of eotaxin-1 [19], and could contribute to allergen-induced airway eosinophilia, and eosinophilic inflammation [20,21]. Therefore, investigating the possible involvement of various JAK-STAT regulators in immune disease and the associated molecular mechanisms is an important area of research.
In the present study, we investigated the effects of synephrine on IL-4-induced eotaxin-1 production, and its mechanisms of action. In addition, we demonstrated that synephrine inhibits STAT6 phosphorylation, during IL-4-induced upregulation of eotaxin-1 in fibroblasts.

To identify the active compounds in immature Citrus unshiu, we analyzed the differences of phytochemicals between mature and immature Citrus unshiu fruit extracts. Hesperidin and naringin were mainly contained in Citrus unshiu extract, at higher contents than other flavonoids; and the content of these flavonoids decreased during maturation. These flavonoids are known for their anti-inflammatory effect [23]. Synephrine alkaloid was found in Citrus unshiu fruit extract; and immature extract contained approximately five times more synephrine than mature extract (Figure 2b). As shown in Figure 2a, the greatest difference between the two types of extracts was the content of synephrine, which is the main alkaloid in Citrus fruits. 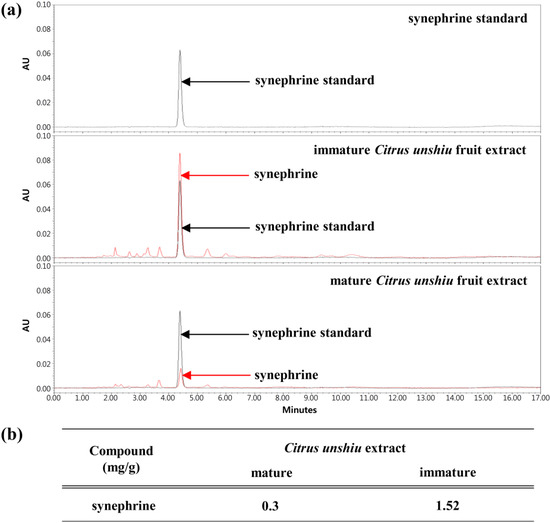 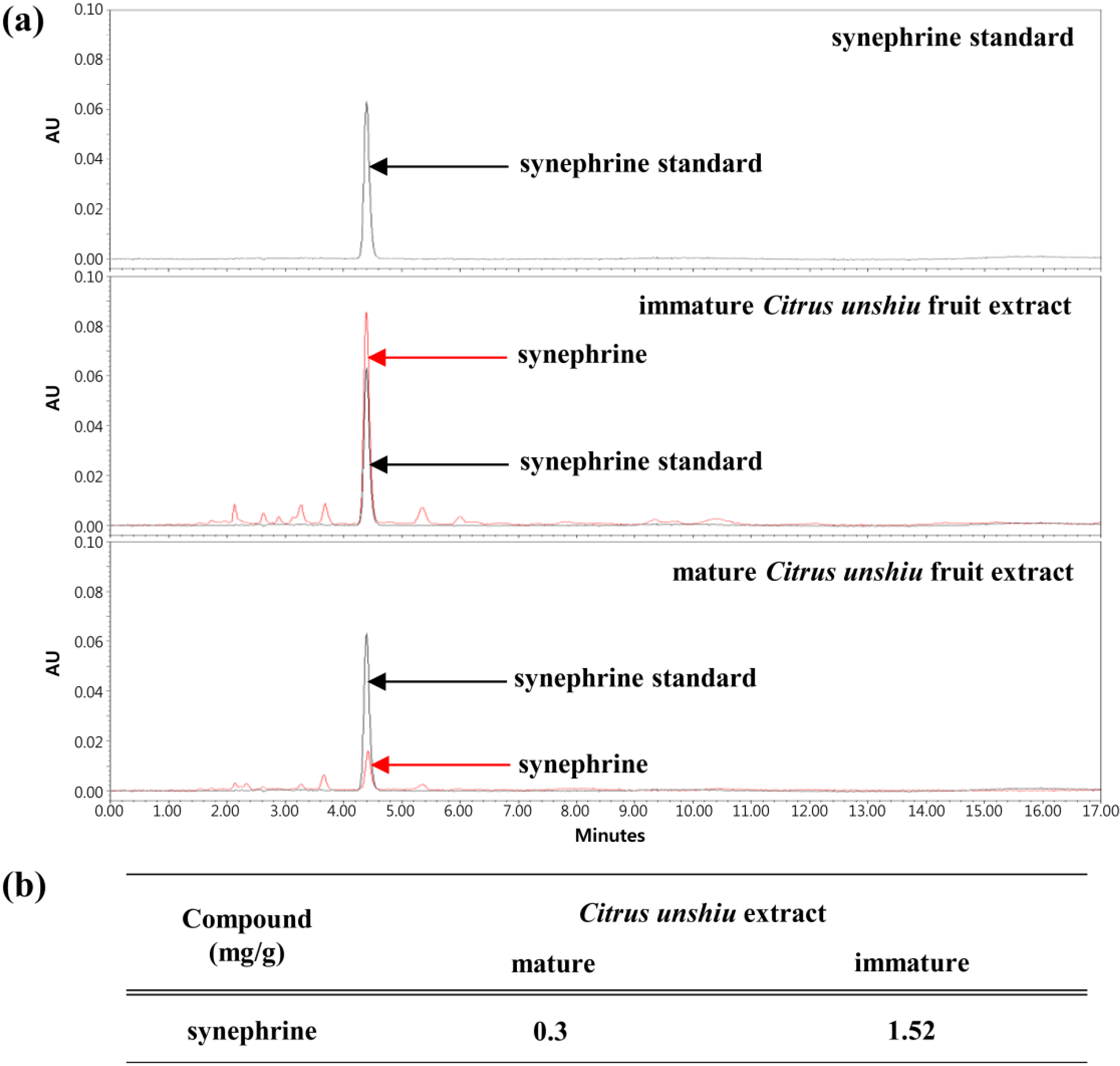 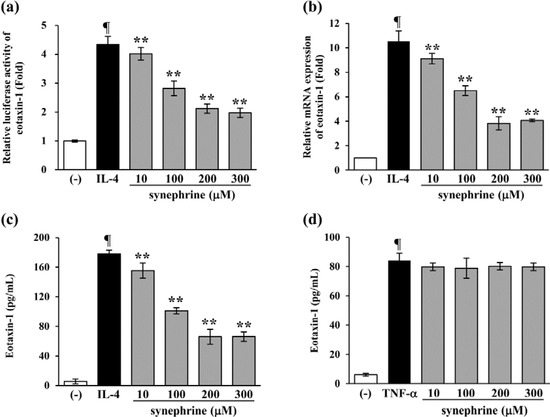 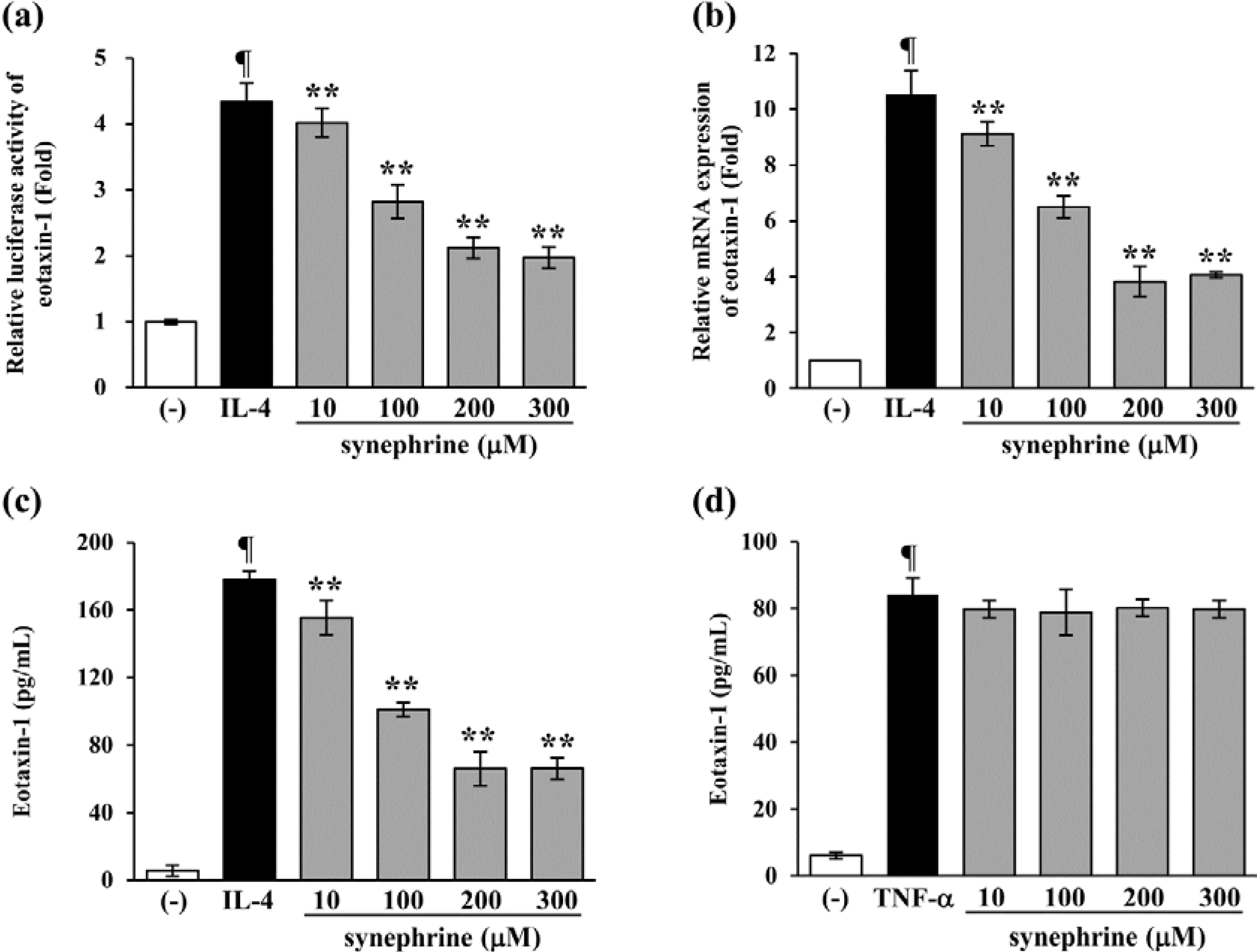 2.4. Synephrine Inhibits STAT6, but not JAK1 Phosphorylation Induced by IL-4

STAT6 acts as a signal transducer immediately downstream of IL-4 receptor activation, via tyrosine phosphorylation by JAK1, IL-4 receptor-associated tyrosine kinases [24]. In the previous studies, it was reported that STAT6 was essential for IL-4-induced eotaxin-1 production [25]. To investigate whether these signaling factors were involved in the synephrine effects, we performed Western blot analysis for JAK1 and STAT6. As shown in Figure 4, STAT6 and JAK1 phosphorylation were induced by IL-4. In addition, STAT6 phosphorylation was inhibited by synephrine (Figure 4b), whereas synephrine had no effect on JAK1 phosphorylation (Figure 4a). These results suggest that synephrine attenuates IL-4-induced eotaxin-1 expression, by downregulating the activation of STAT6. We performed immunohistochemistry for STAT6, to analyze STAT6 translocation from the cytosol to nuclei. The immunohistochemical studies revealed that the STAT6 translocation rate decreased by synephrine treatment (Figure 4c). These results indicate that synephrine is involved in attenuating IL-4-induced-STAT6 translocation. 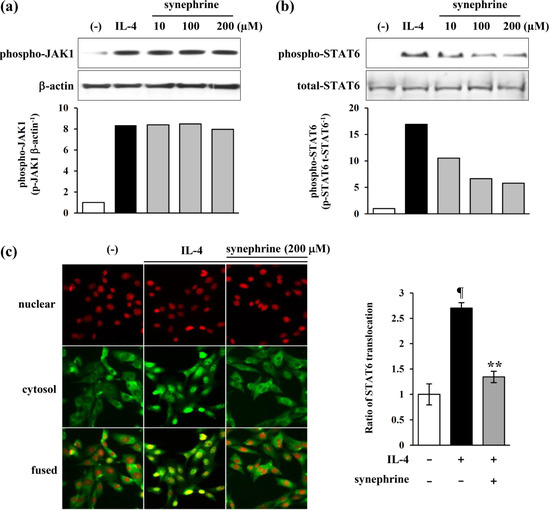 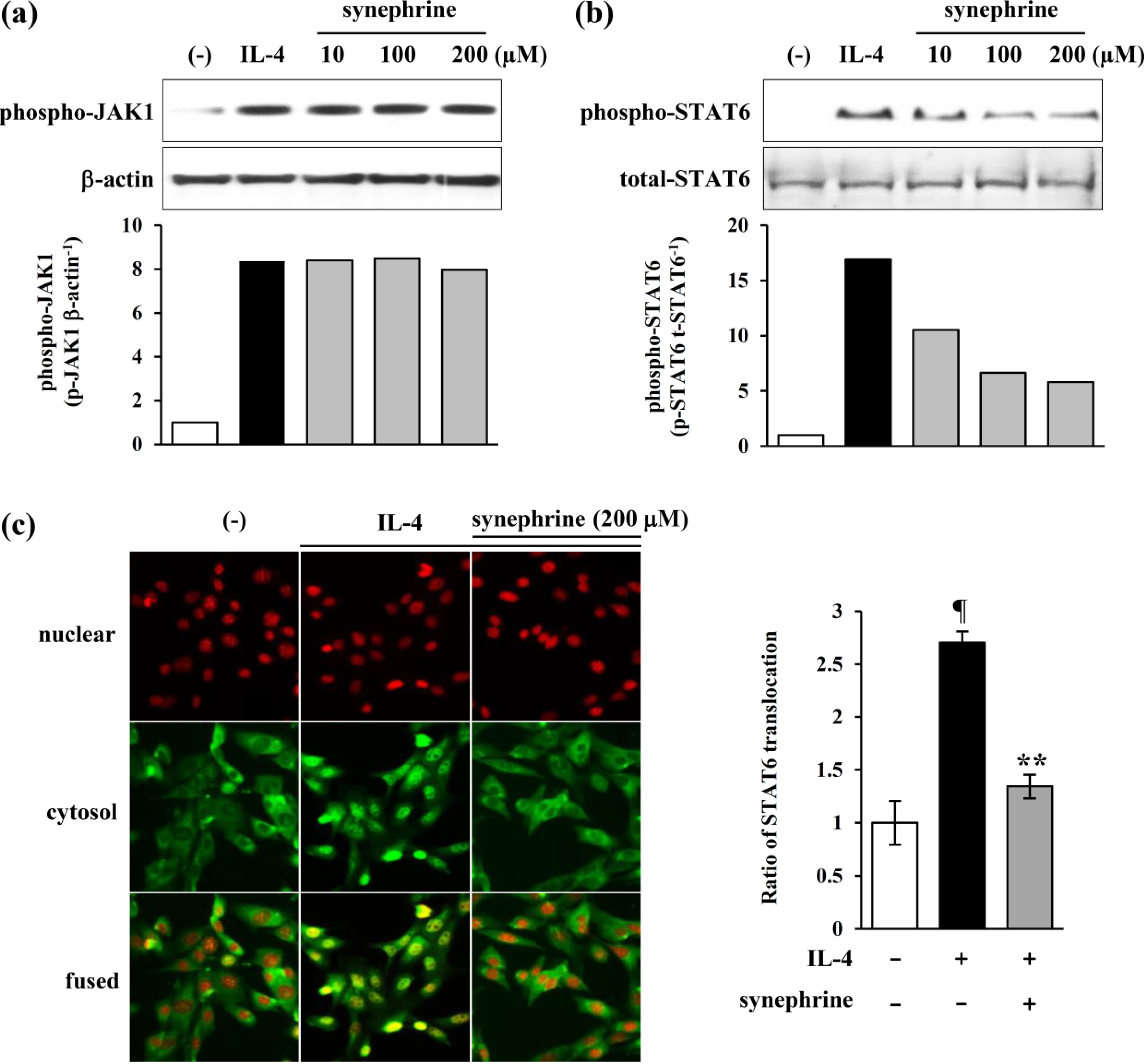 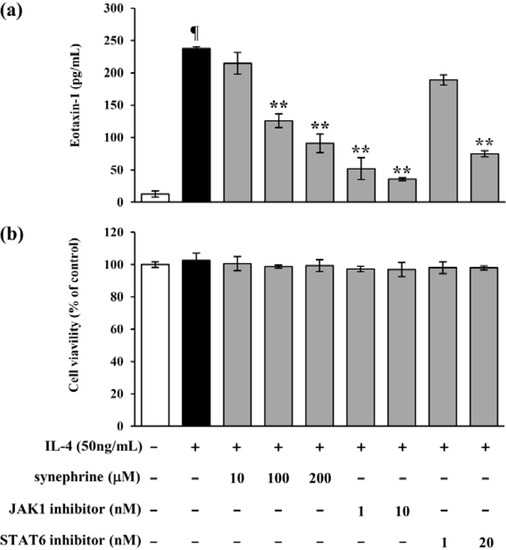 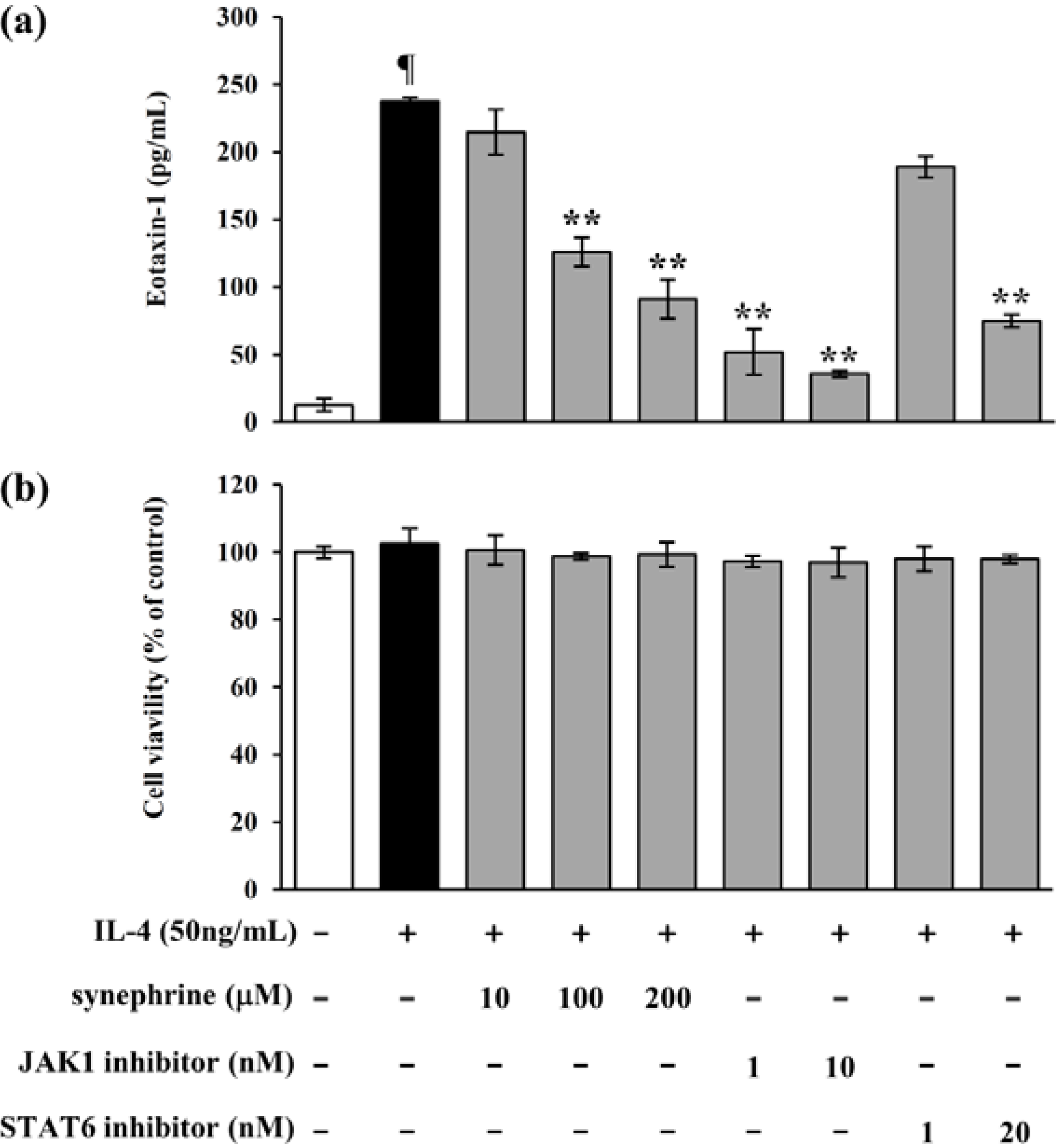 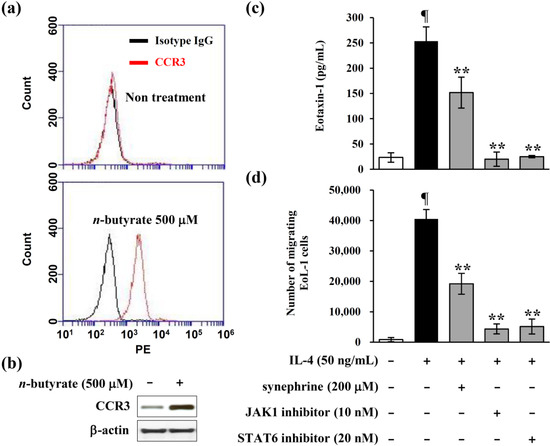 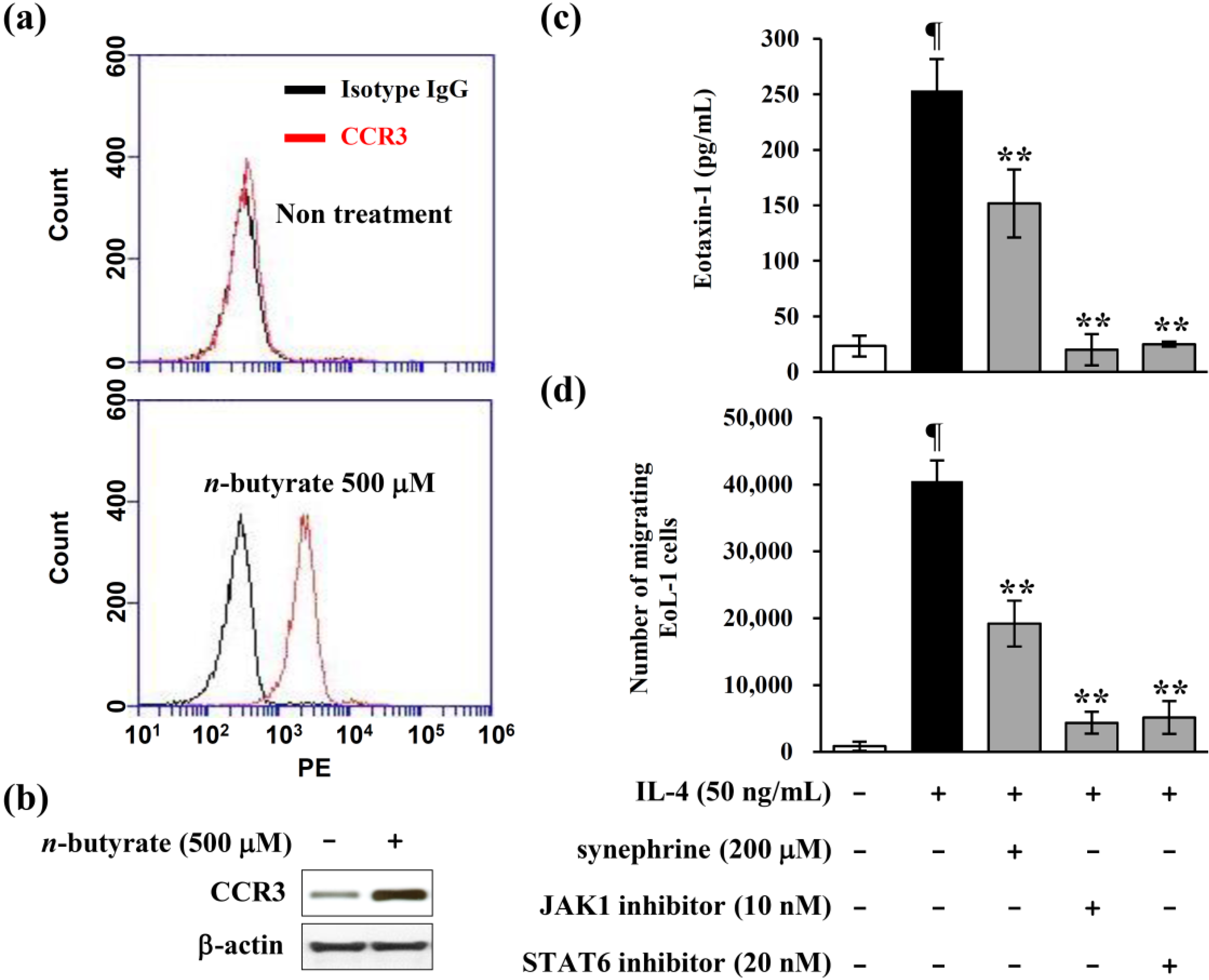 A Waters (Milford, MA, USA) HPLC system with a 600 Controller, 996 Photodiode Array Detector, 616 Quaternary pump, and a 717 Autosampler was used for analysis of synephrine. Data acquisition was achieved using the Waters Empower software. All chromatographic separations were conducted on a Luna® 5 μM C18 column (150 mm × 4.6 mm, 5 μm, Phenomenex, Torrance, CA, USA) at ambient temperature with detection at 273 nm. The mobile phase consisted of 0.1% trifluoroacetic acid in water and acetonitrile (97:3, v/v) for 15 min.

Cell viability was measured using the MTT (3-[4, 5-dimethylthiazol-2-yl]-2,5-diphenyltetrazolium bromide; USB Corp., Cleveland, OH, USA) assay. Cells were plated in triplicate wells of 12-well plates, and incubated overnight. The cells were then treated with synephrine for 24 h, under a serum-free condition. Then, MTT reagent (1 mg/mL) was added to each well, and the cells were incubated for 3 h. The medium was removed, and the cells were solubilized with dimethyl sulfoxide (DMSO, Sigma, St. Louis, MO, USA). The absorbance was measured by spectrophotometer at a wavelength of 570 nm.

Eotaxin-1 concentrations were quantified in cell culture supernatants, after treatment with synephrine induced by IL-4, using a commercially available ELISA kit (eBioscience). Cell culture supernatants were collected 24 h after treatment with 200 μM synephrine, and assayed for eotaxin-1. The standard curve was linearized, and subjected to regression analysis. Eotaxin-1 concentrations were determined, using a standard curve. All samples and standards were measured in duplicate.

STAT6 translocation was determined by immunohistochemistry. An aliquot of 1 × 102 cells was seeded in 96-well plates, cultured for 24 h, and then treated with IL-4 in the presence or absence of synephrine, for 60 min. The cells were fixed in 4% paraformaldehyde, washed with PBS, permeabilized with 0.2% Triton X-100, and incubated with a rabbit polyclonal antibody to STAT6 (1:200, 5% goat serum in PBS) for 2 h, followed by fluorescein isothiocyanate (Santa Cruz Biotechnology, Santa Cruz, CA, USA) goat anti-rabbit IgG (1:200), for 1 h. After three washes with PBS, the cells were incubated with 0.5 μg/mL Hoechst 33342 (Invitrogen), for 5 min. The cells were then examined, using the IN Cell Analyzer 1000 (GE Healthcare Lifescience, Uppsala, Sweden).

We used the Cytoselect Cell Migration Assay kit (Cell Biolabs, San Diego, CA, USA), according to the manufacturer’s instructions. Briefly, differentiated eosinophilic EoL-1 cells and human fibroblasts were co-cultured in two-compartment Transwell system. For eosinophilic EoL-1 cells, 2 × 106 cells in 400 μL serum free medium were added to the upper chamber of the Transwell plates, with 3-μm-pore filters. Lower chambers were first seeded with fibroblasts at 5 × 104 cells in 500 μL serum free medium, for 24 h. Synephrine and/or IL-4 were added to the lower wells, for 24 h. After 24 h incubation, migratory EoL-1 cells were subsequently lysed, and detected by fluorescence measurement.

All data are expressed as means ± standard deviations. Differences between the control and the treatment group were evaluated by one way ANOVA. p < 0.05 was considered statistically significant.

This study was supported by a grant of the Korean Health Technology R&D Project, Ministry of Health & Welfare, Republic of Korea (Grant No.: HN11C0046).