Efficacy Evaluation of a Multifunctional Cosmetic Formulation: The Benefits of a Combination of Active Antioxidant Substances

An investigation of the effects of an aqueous extract of Agaricus blazei, a medicinal mushroom, on the oxidative state of the brain and liver of rats during aging (7 to 23 months) was conducted. The treatment consisted in the daily intragastric administration of 50 mg/kg of the extract. The A. blazei treatment tended to maintain the ROS contents of the brain and liver at lower levels, but a significant difference was found only at the age of 23 months and in the brain. The TBARS levels in the brain were maintained at lower levels by the A. blazei treatment during the whole aging process with a specially pronounced difference at the age of 12 months. The total antioxidant capacity in the brain was higher in treated rats only at the age of 12 months. Compared with previous studies in which old rats (21 months) were treated during a short period of 21 days with 200 mg/kg, the effects of the A. blazei extract in the present study tended to be less pronounced. The results also indicate that the long and constant treatment presented a tendency of becoming less effective at ages above 12 months. View Full-Text
Keywords: aging; oxidative stress; oxidative damage; brain; liver; A. blazei treatment aging; oxidative stress; oxidative damage; brain; liver; A. blazei treatment
►▼ Show Figures 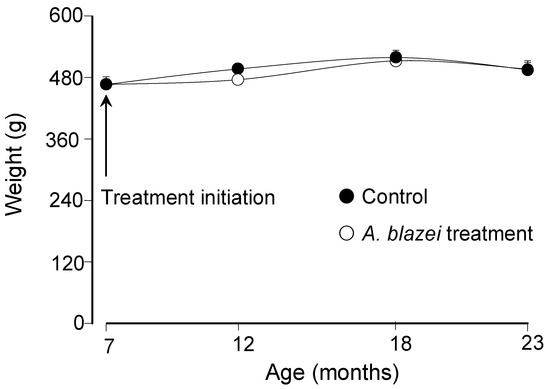