Acute and chronic stresses are characterized by the physiological changes that occur in response to novel or threatening stimuli. The neuroendocrine damages in response to acute and chronic stresses are mediated by both the sympathetic nerve system and the hypothalamus-pituitary-adrenal (HPA) axis, which lead to the regulation of the release of dopamine, norepinephrine, serotonin, glutamate, and corticotropin-releasing and adrenocorticotropic hormones in central nervous system (CNS) and the secretion of glucocorticoids in plasma [1]. Chronic stress has been linked to the pathophysiology of mood including anxiety disorders and depression [2]. Beside neuroendocrine release, including that of dopamine, serotonin and glucocorticoids, c-Fos expression, one of the immediate early genes, is increased by acute and chronic stresses within the paraventricular nuclei (PVN) in the hypothalamus of mice and rats, as a marker of altered neuronal responses [3,4].
Chronic stress and chronic stress-induced anxiety disorders have become increasingly more important public health concerns in recent years. However, the ranges of available pharmacotherapy for the treatment of anxiety disorders induced by chronic stress are limited and suboptimal with regard to efficacy and tolerability [5].
A number of chronic stress models, including electric footshock (EF) stress, forced swimming, noise stimulus and immobilization, have been employed to induce anxiety disorders in the past decades [6]. In addition, elevated plus-maze is a widely used test, which is based on the natural aversion of rodents to heights and open spaces, and which has been validated to be suitable for the assessment of anxiety disorders for both mice and rats [7]. As another characteristic behavior of the anxiety state of animals, the defensive nature of marble burying has been used as a screening model for the detection of anxiolytics [7,8].
Gynostemma pentaphyllum (GP, Cucurbitaceae) has been used as an herbal tea containing various bioactive gypenoside derivatives and flavonoids, and has been found to have pharmacological functions against diabetes, fatigue, hyperlipidemia, immunity, oxidative stress and tumors [9]. Recently, the ethanol extract from GP (GP-EX) has been reported to have anti-stress properties, by improving the loss of body weight and the reduction of grip strength which was induced by chronic EF stress [10] as well as an immunomodulatory function in mice [11,12].
In addition, GP-EX has protective effects against neurotoxicity by reducing tyrosine hydroxylase neuron cell death, and by normalizing dopamine levels in the 6-hydroxydopamine (6-OHDA) lesion rat model of Parkinson’s disease (PD) [13]. The gypenoside-rich fraction also shows neuroprotective effects in the 1-methyl-4-phenyl-1,2,3,6-tetrahydropyridine-induced mouse model of PD [14].
In this study, in order to further define the anxiolytic functions of GP-EX, the neuropharmacological effects of GP-EX on chronic EF stress-induced anxiety disorders were investigated by examining the behavioral evaluation, using the elevated plus-maze and marble burying tests, and determining the influences on the levels of dopamine and serotonin in the brain, the serum levels of corticosterone, and the expression of c-Fos in the PVN, using a mouse animal model system.

2.1. Effects of GP-EX on Elevated Plus-Maze

2.2. Effects of GP-EX on Marble Burying

2.3. Effects of GP-EX on the Levels of Dopamine in the Brain 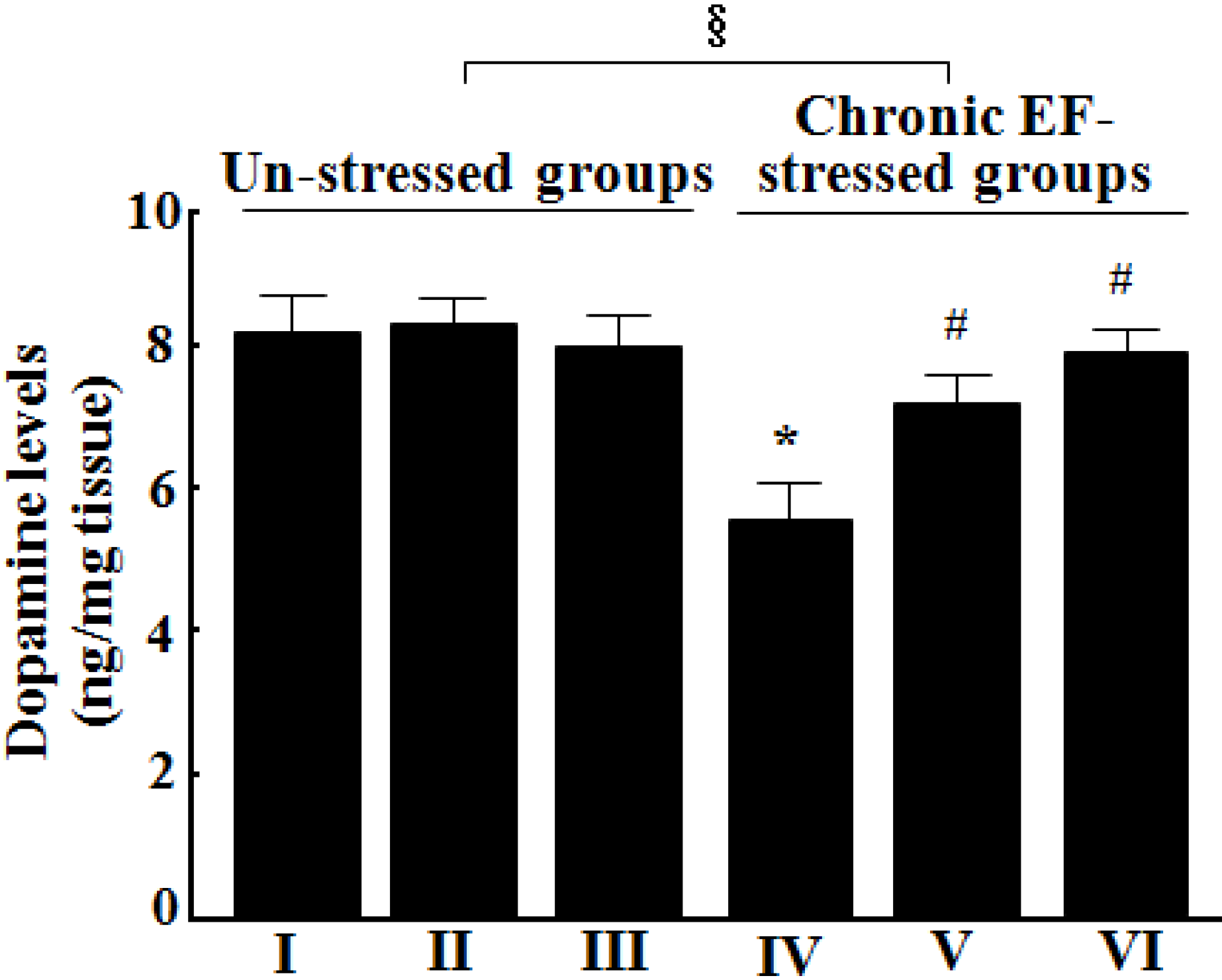 2.4. Effects of GP-EX on the Levels of Serotonin in the Brain

2.5. Effects of GP-EX on the Levels of Corticosterone in the Serum

The expression of c-Fos in the PVN was markedly increased to ca. 4.1-fold that of the control groups by exposure to chronic EF stress for 14 days (Figure 6A,B). However, the expression of c-Fos was reduced by treatment with GP-EX (30 mg/kg and 50 mg/kg) in the PVN (Figure 5A). The number of c-Fos-immunoreactive nuclei in PVN, which was increased by chronic EF stress, was significantly reduced to ca. 2.4-fold and 1.3-fold that of the control groups by treatment with GP-EX at 30 mg/kg and 50 mg/kg, respectively (n = 7, p < 0.05) (Figure 6).

GP was obtained from Wonkwang Food Manufacturing Co. (Geochang, Korea), and a voucher specimen of the herbal leaves of GP was deposited at the herbarium of the College of Pharmacy, Chungbuk National University (Cheongju, Korea). The air-dried leaves of GP (10 kg) were extracted with ethanol (20 L, 80%, v/v) at 70–80 °C for 24 h, and the ethanol extracts were then evaporated to dryness (GP-EX, 1.05 kg; yield, 10.5%, w/w). The main components of GP-EX including gypenosides and ombuoside were identified to standardize the ethanol extracts [9,13].

Mice (ICR, male, 20–25 g) were purchased from Samtako Co. (Animal Breeding Center, Osan, Korea). Animals were housed two per cage in a temperature controlled environment with a 12-h light/dark cycle (lights on at 07:00) and with ad libitum access to standard mouse food and water. This study was performed in accordance with the guidelines for the care and use of laboratory animals of Chungbuk National University Laboratory Animal Research Center (approval number: CBNU-481-12-01).

Mice were divided randomly into six groups, with each group containing 8–10 animals. GP-EX (30 mg/kg and 50 mg/kg), which was freshly prepared every day with water, was administered orally once a day ca. 2 h before the exposure of EF stress for 14 days.
Group I was the control groups, and received saline (0.9%). Group II and Group III were the GP-EX-treated groups, and were treated with GP-EX at 30 mg/kg (Group II) and 50 mg/kg (Group III) for 14 days.Group IV was the chronic EF-stressed groups. Group V and Group VI were the GP-EX-treated groups, and received EF stimuli for 14 days, as well as being treated with GP-EX at 30 mg/kg (Group V) and 50 mg/kg (Group VI). The experiments were performed in the independent group of animals. On the final day (day 14), after the final administration of each treatment, all experimental groups were subjected to the elevated plus-maze or marble burying test, and the mice were then anaesthetized and sacrificed to obtain brain tissues and serum for biochemical and immuno-histochemical analyses.

4.5. The Exposure to Chronic EF Stress

The mice were placed individually in the electrified shock chamber for the exposure to chronic stress and they received unavoidable EF stimuli (intensity, 2 mA; interval and duration, 10 s; periods, 3 min) at 14:00 every day for 14 days using a shock generator (Seil Electric Co., Taejeon, Korea) [10].

The elevated plus-maze apparatus consists of four arms (30 cm × 5 cm) and two closed arms of the same size, with 16-cm-high black walls elevated 45 cm above the floor. The two arms of each type were arranged on opposite sides to each other. The open and closed arms were connected via a central square (5 cm × 5 cm) to form a plus sign. During test sessions, two incandescent lights (40 W each) provided sufficient illumination of the maze area. Testing commenced upon placing a mouse on the central platform of the maze, facing an open arm. An arm entry was defined as all four paws having crossed the dividing line between an arm and the central area. During a 5 min test period, the number of entries and time spent on the open arms were recorded by a video camera connected to a video-tracking system SMART (Panlab S.I., Barcelona, Spain) [38].

The marble burying test was placed in a cage measuring 33 × 21 × 19 cm (l × w × h), containing bedding that was 5 cm in depth, with twenty-five marbles 2 cm in diameter, arranged in two rows along the same short wall of the cage [8]. Testing was conducted for a 30-min period under red light and white noise. After a 30-min exposure to the marbles, mice were removed and the number of marbles buried was recorded. Marbles were considered to be buried if at least half of their surface was covered with bedding [8,18].

The whole brains were removed immediately and brain tissues were homogenized in perchloric acid (1 M, 300 μL), and the homogenates were centrifuged at 12,000 × g at 4 °C for 20 min. The supernatants were filtered using pore filters (Millex-GV, 0.45 μm, Waters, Milford, MA, USA) and the filtrate (100 μL) was injected into an HPLC system with electrochemical detection [39]. The results were expressed in terms of ng/mg tissue.

The whole brain tissues were homogenized in trichloroacetic acid (0.3 M, 500 μL) and HIAA (300 pmol, internal standard). The homogenates were immediately centrifuged at 12,000 × g at 4 °C for 20 min. The supernatants were then filtered using pore filters (Millex-GV, 0.45 μm, Waters) and the filtrate (100 μL) was injected into an HPLC system with fluorescence detection [40]. The results were expressed in terms of ng/mg tissue.

Blood was collected from the heart of sacrificed mice, and was then centrifuged at 12,000 × g at 4 °C for 15 min to obtain a serum. The serum levels of corticosterone were assessed using an enzyme-linked immunosorbent assay kit (USCN Life Sci., E0540m, Wuhan, China).

In this study, in the control groups, treatment with GP-EX (30 mg/kg and 50 mg/kg) did not alter the numbers of open arm entries and marbles buried in the behavioral tests, and also did not show any interaction between the control and GP-EX-treated groups. In contrast, GP-EX (30 mg/kg and 50 mg/kg) showed the ameliorating functions on anxiety disorders induced by chronic EF stress in mice. The anxiolytic functions of GP-EX on the results of the elevated plus-maze and marble burying tests occur due to modulation of the dopamine and serotonin neuron activity, as well as the expression of c-Fos in the brain, and the serum levels of corticosterone, which was suggested to be associated with the PVN regions and HPA axis. These data contribute to the application and development of GP-EX though herbal GP-EX and its bioactive components need to be studied further. The precise neurochemincal mechanisms of GP-EX on anxiety disorders induced by the potential and discrete threat stimuli also need to be investigated prior to clinical trials.

This work was supported by the Connection and Cooperation Project in Mega Economic Region through the Korea Institute for Advancement of Technology (KIAT), funded by the Ministry of Knowledge Economy (MKE) (A00450003) (2012), and the Research Center for Bioresource and Health, KIAT funded by MKE (2012), Korea. The authors have no conflict of interests to declare.