:
Sophoricoside, an isoflavone glycoside isolated from Sophora japonica (Leguminosae), has been widely reported as an immunomodulator. In this study, the effects of sophoricoside on lipogenesis and glucose consumption in HepG2 cells and C2C12 myotubes were investigated. Treatment with sophoricoside at concentrations of 1–10 μM inhibited lipid accumulation in HepG2 cells in a dose-dependent manner. At the same concentration range, no effect on cell viability was observed in the MTT assay. Inhibition of lipogenesis was associated with the downregulation of SREBP-1a, SREBP-1c, SREBP-2 and their downstream target genes (FAS, ACC, HMGR) as revealed by realtime quantitative PCR. The lipid-lowering effect was mediated via the phosphorylation of AMPK. Further investigation of the activities of this isoflavone showed that sophoricoside has the capability to increase glucose uptake by C2C12 myotubes. It also effectively inhibited the activities of α-glucosidase and α-amylase in vitro and remarkably lowered postprandial hyperglycaemia in starch-loaded C57BL6/J mice. These results suggest that sophoricoside is an effective regulator of lipogenesis and glucose consumption and may find utility in the treatment of obesity and type 2 diabetes.
Keywords:
sophoricoside; glucosidase; glucose consumption; lipogenesis; lipolysis; AMPK

Type 2 diabetes (T2DM) is becoming a serious threat to human health in all parts of the World, placing an enormous burden on national healthcare systems, particularly in developing countries [1,2]. Modernized lifestyles featured by over-nutrition and less-exercise stimulate the increase in the prevalence of obesity and associated metabolic disorders including T2DM. In T2DM, insulin action is reduced, resulting in decreased insulin-stimulated glucose uptake. Many studies have shown that the over accumulation of lipids in liver is a key cause for the development of insulin resistance [3,4]. Decreasing lipid accumulation in liver through inhibition of lipogenesis or stimulation of lipolysis is therefore beneficial for the prevention and treatment of T2DM. Currently, studies on obesity and diabetes focus on discovering natural functional molecules that have the capability of suppressing the fat accumulation in liver tissues. For example, resveratrol [5], cordycepin [6], and chlorogenic acid [7] suppress lipogenesis and fat accumulation.
Sophoricoside is an isoflavone glycoside isolated from Sophora japonica (Leguminosae), a Traditional Chinese Medicine known to possess hemostatic properties, anticancer, anti-oxidation, anti-obesity and anti-hyperglycemic effects [8,9,10,11]. Previous investigations have demonstrated several biological effects of sophoricoside, such as estrogenic activity [12], anti-oxidation [13], anti-inflammation [14], stimulation of osteoblast proliferation [15], and immunomodulative activity [16]. Apart from these, there is no report about the lipid and glucose modulating activities of sophoricoside. In the present work, we investigated the effects of sophoricoside on lipid accumulation and glucose consumption in HepG2 cells and C2C12 myotubes, to find potential utility of sophoricoside in the prevention and treatment of obesity and type 2 diabetes.

To evaluate the effect of sophoricoside on lipid metabolism, oleic acid (OA)-elicited neutral lipid accumulation in HepG2 cells was used and the intracellular lipid content was determined by Oil Red O staining and specific kits for cellular total lipids, total cholesterol and triglyceride. As shown in Figure 1, supplementation with OA significantly increased lipid accumulation in HepG2 cells. Treatment with sophoricoside decreased OA-elicited neutral lipid accumulation (Figure 1A,B) as well as intracellular contents of total lipids (Figure 1C), triglyceride (Figure 1D) and total cholesterol (Figure 1E) in a dose-dependent manner. This inhibitory effect on lipid metabolism was independent of the cytotoxic effect of sophoricoside on HepG2 cells, which was observed starting at a higher concentration (75 μM) in MTT assay (Figure 2). 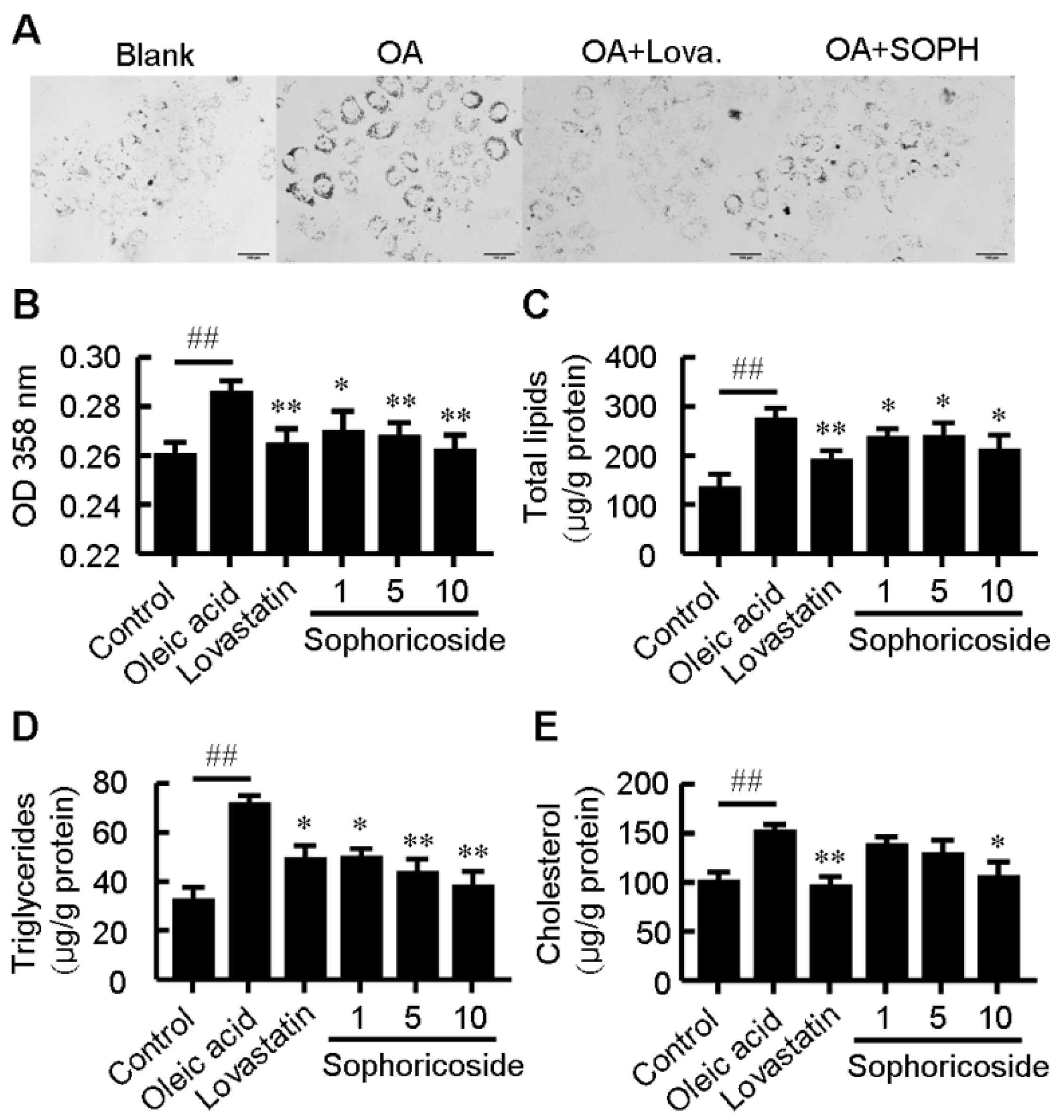 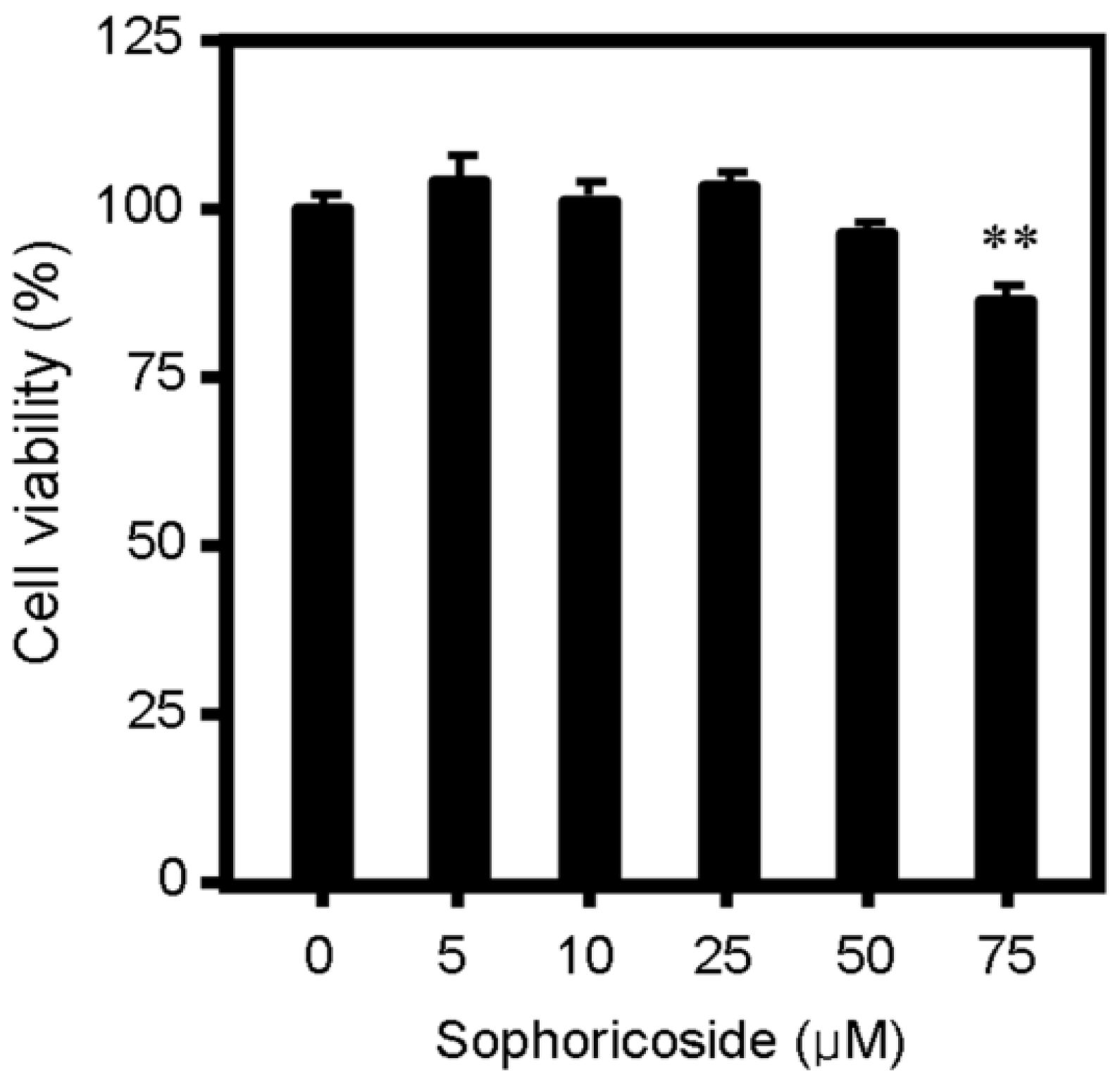 The synthetic processes of cholesterol and fatty acids are both controlled by a common family of transcription factors designated sterol regulatory element-binding protein (SREBPs) [17,18]. The mammalian genome encodes three SREBP isoforms named SREBP-1a, SREBP-1c and SREBP-2. SREBP-1a is a potent activator of all SREBP-responsive genes, including those that mediate the synthesis of cholesterol (3-hydroxy-3-methylglutaryl coenzyme A reductase (HMGR)), and fatty acids (fatty acid synthase (FAS) and acetyl-CoA carboxylase (ACC)) while the roles of SREBP-1c and SREBP-2 are more restricted. SREBP-1c preferentially enhances transcription of genes required for fatty acid synthesis while SREBP-2 preferentially activates cholesterol synthesis [17]. Quantitative realtime PCR showed that treatment with sophoricoside (10 μM) significantly decreased the expression of SREBP-1a, SREBP-1c and SREBP-2 transcription factors. The expression of FAS and HMGR were also reduced after sophoricoside treatment (Figure 3). These data suggested that sophoricoside suppresses both cholesterol and triglyceride synthesis. 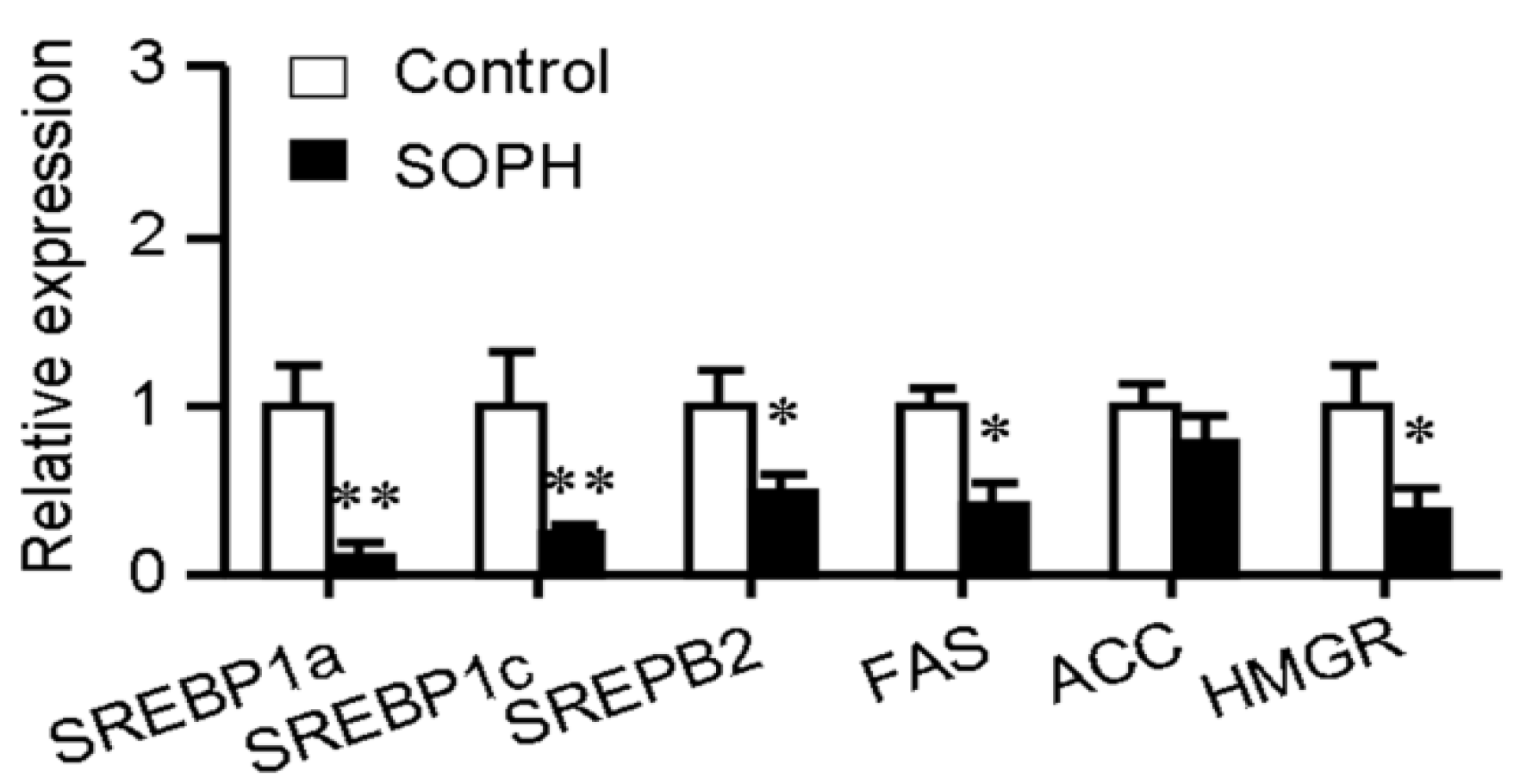 2.3. Sophoricoside Increases the Activity of AMPK

AMPK is a key regulator of lipid metabolism, imposing profound influence on lipid oxidation, synthesis, and storage [19,20]. AMPK activation turns on ATP-generating mechanisms such as lipid oxidation while switches off energy-consuming processes like triglyceirde and protein synthesis [19,21]. The phosphorylation at threonine (Thr-172) on the alpha-subunit of AMPK has been deemed as an index of activation of this kinase which in turn promotes the phosphorylation and inhibition of ACC. Recent studies have demonstrated that AMPK can directly phosphorylate and inhibit SREBP activity to attenuate hepatic steatosis [22]. AMPK has now been proposed as a major therapeutic target for obesity and obesity-linked metabolic disorders including diabetes.
The protein levels of AMPK and its phosphorylated form (phospho-AMPK), which indicates the activation of AMPK, were evaluated by western blot. To confirm the activation of AMPK, the expression levels of ACC protein and its phosphorylated form (phospho-ACC) were simultaneously examined. As displayed in Figure 4A, the sophoricoside remarkably enhanced the levels of the activated form of AMPK (phospho-AMPK) and ACC (phosphor-ACC), which indicates the activation of AMPK by sophoricoside. Importantly, the lipid-lowering effect of sophoricoside was substantially abolished when cotreated with compound C, a well-known AMPK inhibitor (Figure 4B), suggesting that AMPK plays a key role in sophoricoside-mediated lipid-lowering effect. 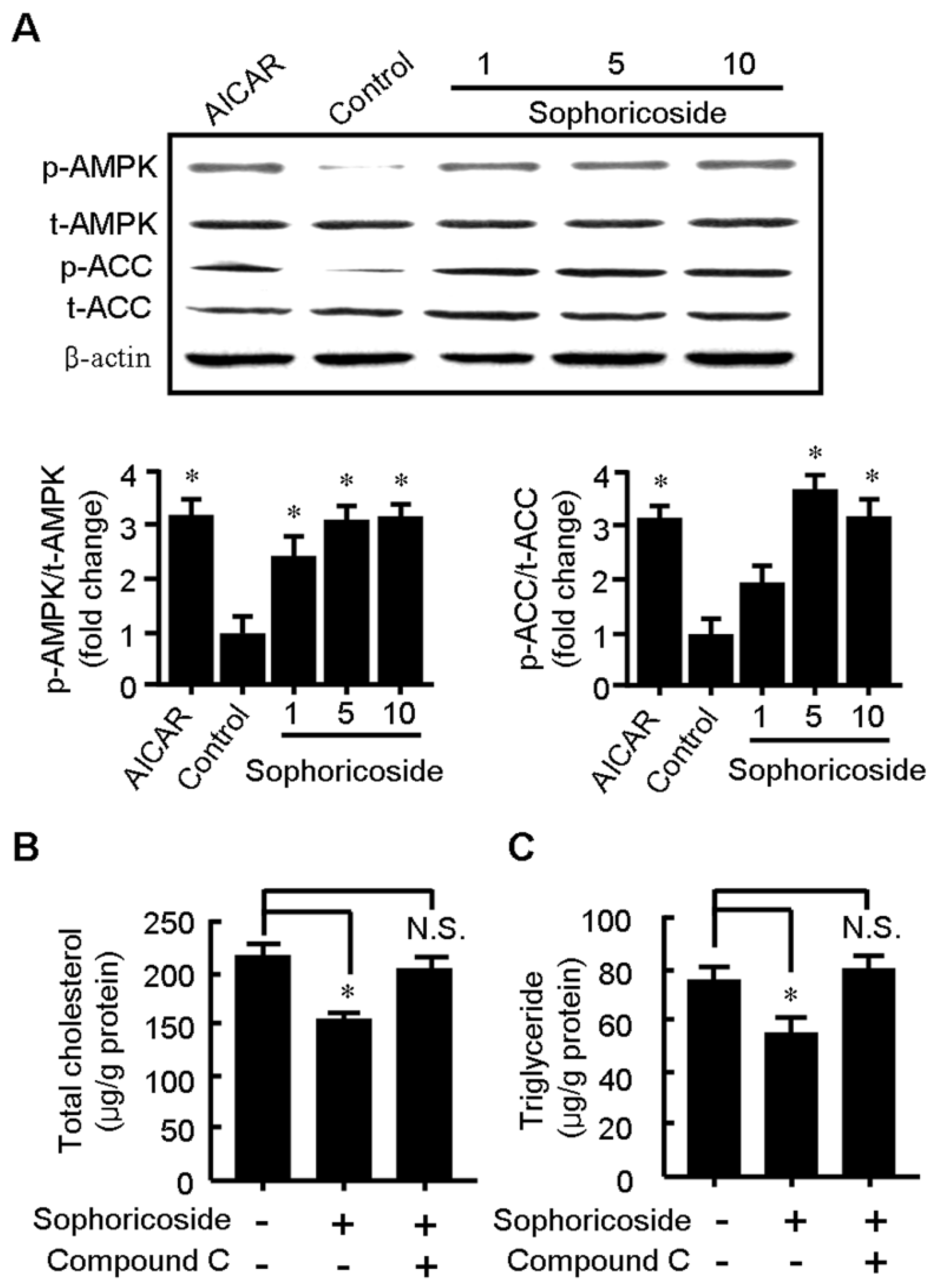 2.5. Sophoricoside Inhibits the Activities of α-Glucosidase and α-Amylase In Vitro and In Vivo

C2C12 myoblasts were mantained in DMEM supplemented with 10% FBS at 37 °C and 5% CO2. To induce differentiation, media was replaced with DMEM containing 2% horse serum when the cells reached confluence. The C2C12 cells were kept in this differentiating medium for 5 days, which allowed cells to be fully differentiated and used in the following experiments. HepG2 cells were cultured in DMEM medium containing 10% fetal bovine serum (FBS) at 37 oC and 5% CO2. Before treatment, cells were kept in serum-free DMEM for 12 h then incubated with the indicated concentration of sophoricoside or with lovastatin (10 μM) in DMEM containing oleic acid (100 nM) for 24 h. The blank group was incubated with serum-free DMEM alone. Oil red O staining was performed as previous reported [26] and the intracellular contents of total lipid, total cholesterol and triglyceride were determined by kits according to manufacturer’s instructions.

HepG2 cells were cultured in a 24-well plate. After reaching confluence, the cells were incubated for 48 h in the presence of sophoricoside. Subsequently, the culture medium was removed and replaced by 500 μL of fresh culture medium containing 10% sterile filtered MTT. After 3 h, the insoluble formazan crystals were dissolved in 500 μL/well isopropanol and absorbance was measured at 570 nm, using the 630 nm reading as a reference. The inhibition of growth due to sophoricoside was expressed as a percentage of viable cells in experimental wells relative to control wells.

Glucose uptake assay was performed as previously reported [28]. Briefly, differentiated C2C12 myotubes were incubated with the serum-free DMEM containing the fluorescent glucose analog 2-NBDG (10 μM) and sophoricoside (1, 5 or 10 μM) in the presence or absence of insulin (100 nM). After incubation for 12 h, medium was removed and cells were washed with phosphate-buffered saline (PBS) twice. Cells were scraped out in 1 mL of PBS and transferred into 5 mL polystyrene round-bottom tubes (BD Falcon) and kept at 4 °C. The amount of 2-NBDG taken up by the cells was measured by determining the fluorescence intensities at Ex/Em = 475 nm/550 nm using a Tecan Infinite M1000Pro Microplate Reader (TECAN Group Ltd, Shanghai, China).

Inhibition of α-glucosidase and α-amylase activities was performed according to the chromogenic method described previously [29,30], using PNPG and starch as substrate, respectively. Acarbose was used as positive control. The inhibitory activity was expressed as percentage inhibition, equation (1). The IC50 values were calculated by GraphPad Prism 4 software [25].
Inhibition (%) = [(AbsControl − AbsSamples)/AbsControl] × 100

Male C57BL6/J mice (20–22 g each) were obtained from the Institute of Laboratory Animal Science, Chinese Academy of Medical Sciences, Beijing, China. The study was carried out according to the “Principles of Laboratory Animal Care” [World Health Organization (WHO) Chronicle, 1985] and approved by the Animal Ethics Committee of Peking Union Medical College. A standard pellet diet and water were given ad libitum. Animals were maintained under a constant 12 h light and dark cycle and an environmental temperature of 21–23 °C.
Animals were randomly divided into five groups with twelve mice in each group. Prior to the experiment, animals were fasted for eight hours then treated with corresponding agents orally. After another 15 min, each mouse was given 4 g/kg of starch (oral gavage). Blood glucose levels at 0, 1 and 2 h after starch administration were determined by a blood glucose meter (ACCU-CHEK Active, Roche, city, country). The control group received distilled water only, whereas acarbose group received acarbose (100 mg/kg, oral gavage). SOPH groups were treated with sophoricoside (50, 100 and 200 mg/kg respectively, p.o.).

The results were expressed as mean ± SD. A one-way analysis of variance (ANOVA) was done using the SPSS 13.0 software [31]. Significance was accepted at p < 0.05.

This work demonstrated that sophoricoside isolated from Sophora japonica (Leguminosae) is able to inhibit lipid accumulation in HepG2 cells and stimulate glucose consumption in C2C12 myotubes. Decreasing transcription of key lipogenic genes and activating AMPK may involved in the regulating effect of sophoricoside on lipid and glucose metabolism. These results suggest that sophoricoside is an effective regulator of lipogenesis and glucose consumption and may find utility in the treatment of obesity and type 2 diabetes.

The financial assistance given by the Natural Sciences Foundation of Beijing (No.7102111) is gratefully acknowledged.