Cancer is commonly diagnosed in dogs over the age of 10 and is a leading cause of death due to the lack of effective drugs. Flavonoids possess antioxidant, anti-inflammatory and anticarcinogenic properties and have been studied as chemopreventive agents in human cancer therapy. However, the literature on dogs is sparse. In this study, we analyzed the effect of nine flavonoids on cell viability, DNA damage and topoisomerase IIa/IIb gene expression in a canine tumor cell line (DH82). Apigenin, luteolin, trans-chalcone and 4-methoxychalcone showed the highest degree of cytotoxicity in the absence of considerable DNA damage, whereas genistein exhibited low cytotoxicity but induced a high level of DNA damage. These five flavonoids inhibited topoisomerase IIa and IIb gene expression to variable extents and with variable specificity. Genistein exerted a lower inhibitory effect on the two topoisomerases than luteolin and apigenin. trans-Chalcone and 4-methoxychalcone exerted greater inhibition of topoisomerase IIa expression than topoisomerase IIb. The differences in the effects between genistein and luteolin and apigenin might be explained by the position of ring B, whereas the more specific effect of chalcones on topoisomerase IIa might be due to their open chain structure. View Full-Text
Keywords: canine cancer; cytotoxicity; DNA damage; flavonoids; topoisomerase II canine cancer; cytotoxicity; DNA damage; flavonoids; topoisomerase II
►▼ Show Figures 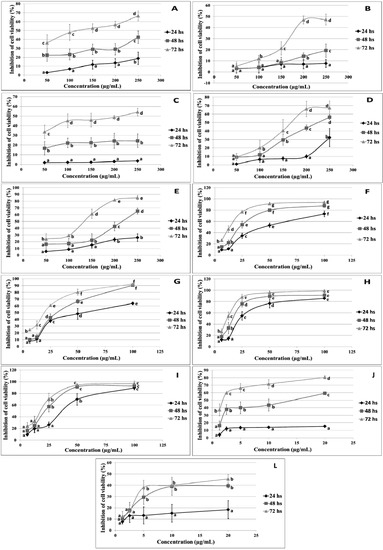